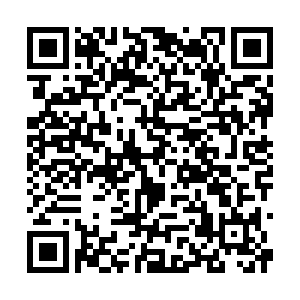 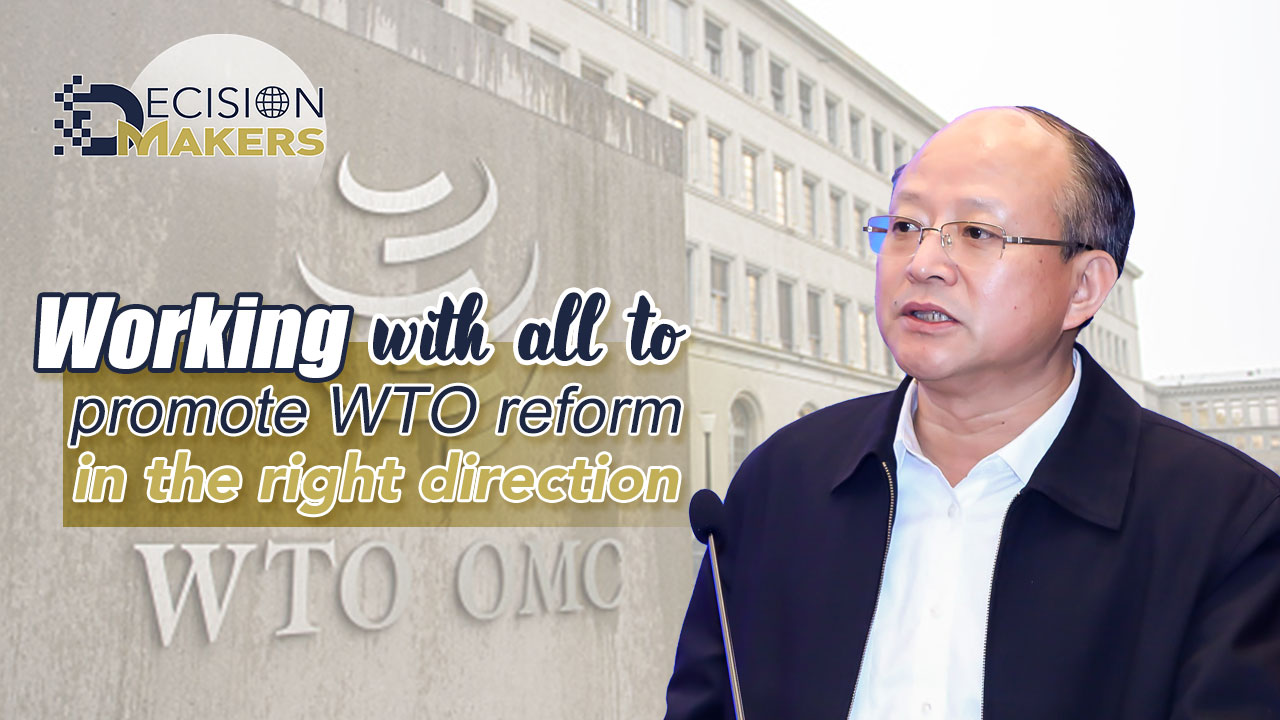 Editor's note: Decision Makers is a global platform for decision makers to share their insights on events shaping today's world. Chen Jian'an is Vice Chairman of China Council for the Promotion of International Trade. The article reflects the author's opinions and not necessarily those of CGTN.

This year marks the 100th anniversary of the founding of the Communist Party of China (CPC) and the 20th anniversary of China's accession to the World Trade Organization (WTO). Not long ago, the CPC convened the sixth plenary session of its 19th Central Committee and comprehensively reviewed the major achievements and historical experience of the Party over the past century. China's accession to the WTO is a milestone in China's reform, opening up and modernization. China's development and progress over the past 40 years of reform and opening up and since its WTO accession 20 years ago are the result of much hard work and great tenacity of the Chinese people under the strong leadership of the CPC. It is also the result of China's proactive steps to strengthen international cooperation and pursue win-win cooperation. At a new starting point, we must stay on top of the prevailing trend of economic globalization, work hard, forge ahead for a better future, practice true multilateralism, safeguard the multilateral trading system, support the WTO reform in moving in the right direction and make greater contribution to an economic globalization that is more open, inclusive, balanced and beneficial for all.

Since its WTO accession 20 years ago, China has both been a beneficiary and contributor

The past 20 years have witnessed a China deepening reform and pursuing all-round opening up. Since its WTO accession, China has gradually developed a domestic economic administration system in line with a set of global economic and trade rules, releasing huge dividends from the strength of system. China has fully delivered on its accession commitments and aligned with WTO rules. The central government has reviewed and revised over 2,300 pieces of laws and regulations, and local governments over 190,000 pieces, which all helped unleash market and social vitality. China abides by rules and has actively submitted more than 1,000 notifications of changes in domestic laws, regulations and policies to the WTO. China has complied with all the rulings of the WTO dispute settlement mechanism and undergone eight trade policy reviews on itself by the WTO. China continues to open up its markets: the overall tariff rate has been cut from 15.3 percent to 7.4 percent and nearly 120 sectors of the service industry are opened, both exceeding the accession commitment. In recent years, China has opened its door still wider to the world, promoted pilot free trade zones and free trade ports, continued to trim the negative list for foreign investment, promoted institutional opening-up that covers rules, regulations, management and standards, and pursued opening-up in a larger scope, to wider areas and at deeper levels.

The past 20 years have witnessed a China seizing opportunities and rising to challenges. China strives to make opportunities out of challenges, actively integrates itself into the international division of labor, and bravely braces the storm and explores the new world in the vast ocean of the global market. From 2001 to 2020, China's economic size grew from the 6th to the 2nd largest in the world, trade in goods from the 6th to the 1st, and trade in services from the 11th to the 2nd. China has led developing countries in utilized foreign investment, and its outbound direct investment (ODI) has risen from the 26th to the 1st. China has caught up with the times in great strides. Since its accession to the WTO, China has constantly been studying, familiarizing with and applying rules in international organizations and on multilateral platforms. China participates in the formulation of international economic and trade rules instead of sitting idly by and leads instead of follow. In the past, we were in the audience or eager to speak on international occasions, while now China's proposals are gaining growing influence, and China has made its voice heard. China has become an active promoter and important contributor to reforming the system of global economic governance, while its international influence, strength of appeal, and power to shape the environment have also been further enhanced.

The past 20 years have witnessed a China stepping up to its responsibilities and benefiting the whole world. China's WTO accession is a right choice following the trend of economic globalization, generating a new wave of domestic development while injecting fresh impetus into the world economy. China has become a key trading partner for more than 120 countries and regions and contributed near 30 percent of world economic growth on average for a number of years, making positive contribution to the sustained growth of the world economy. The Belt and Road Initiative (BRI) has become a well-received international public good and platform for international cooperation in today's world. By 2020, trade between China and BRI partners had exceeded USD9.2 trillion. Direct investment by Chinese companies in countries along the Belt and Road had surpassed USD140 billion. Since 2020, China has overcome the impact of COVID-19 and made important contribution to keeping global industrial and supply chains stable and boosting world economic recovery. China spares no effort to support international cooperation against COVID-19 and enhances communication and coordination with WTO members. China has provided to the international community some 350 billion masks, over four billion protective suits, over six billion testing kits, and over 1.6 billion doses of vaccines. China supports waiving intellectual property rights on vaccines and takes concrete actions to honor the pledge to make vaccines a global public good as a major, responsible country. 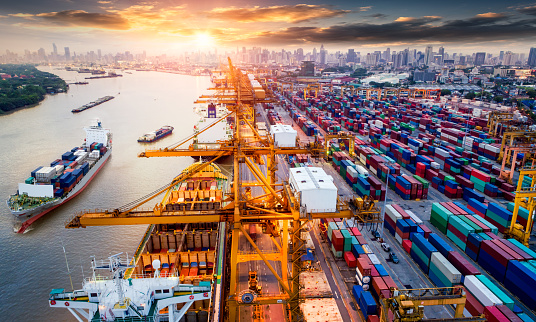 WTO reform is an urgent necessity

In the current global context of significant development, change and adjustment, with the combined forces of changes and a pandemic both unseen in a century, the shift from West to East in the global balance of power has become more evident, the trend of de-globalization has intensified, and the competition for the initiative in global economic governance and international rule-making becomes more intense. A new round of scientific and industrial revolution has deepened and the world faces the combined effects of reshaping competitive advantages, rebuilding economic and trade rules and restructuring the balance of power. That said, there is no fundamental change in the trend toward a multi-polar world; economic globalization is still a historical trend; the prevailing trend for countries to seek openness and cooperation remains unchanged; and the call for upholding multilateralism and enhancing communication and coordination has grown stronger.

The rules-based and WTO-centered multilateral trading system has been the cornerstone of economic globalization and free trade. It is also an important safeguard for promoting the steady growth of the world economy. The WTO is one of the three pillars of the world economic system. As trade among its members now accounts for more than 98 percent of global total, the WTO has played a key role in liberalization and facilitation of global trade and investment. In recent years, as unilateralism and protectionism are on the rise, certain members go against the underlying trend of free trade and multilateralism, abuse unilateral measures, and disrupt international trade and market order, presenting a serious challenge to the authority and effectiveness of the multilateral trading system. The failure of the decision-making process, leadership vacuum, lack of inclusiveness and other underlying problems have become more acute, along with the stalled Doha Round negotiations and the appellate body stalemate. The WTO is facing serious challenges and calls for reform.

Despite all the challenges, the WTO is heading towards a promising future. World prosperity and development still need the WTO. The WTO reform has become a hot topic for global economic governance and the members have shared relevant positions, viewpoints and policies. Looking ahead to the future, the WTO reform needs the members to build broad consensus, focus on the root cause, tighten discipline, be resolute in rejecting unilateralism and protectionism, safeguard a free, non-discriminatory, transparent, predictable and stable trade environment, and support the inclusive development of the multilateral trading system.

China has taken an active part in the WTO reform in a constructive manner, with a series of actions. On June 2018, China released the White Paper "China and the World Trade Organization"; on November 2018, China published "China's Position Paper on WTO Reform," proposing three basic principles and five suggestions; on May 2019, China submitted China's Proposal on WTO Reform, putting forward reform ideas on four areas for concrete actions and 12 specific issues; on November 2019, during an Informal WTO Ministerial Meeting held in Shanghai, President Xi Jinping met with the participating ministers and heads of delegations and they took a group photo together. These actions demonstrate that China attaches great importance to and supports the WTO reform.

China firmly safeguards true multilateralism, supports necessary reforms to the WTO, proposes that the reform should follow a step-by-step approach and tackle easier tasks first, and supports the WTO in playing a more active role in global economic governance and raising the representation and voice of developing countries in the multilateral trading system. China supports positive results at the 12th WTO Ministerial Conference on issues such as fishery subsidies and international cooperation against the pandemic, and the Appellate Body in resuming the normal operation as soon as possible. China will take an active and open attitude in negotiations on issues such as the digital economy, trade and the environment, industrial subsidies and state-owned enterprises, uphold the position of the multilateral trading system as the main channel for international rules-setting, and safeguard the stability of global industrial and supply chains. China is open to and welcomes all regional free trade arrangements that conform to WTO principles. China will work with all relevant parties to give full play to the role of the Regional Comprehensive Economic Partnership (RCEP). China will actively promote the process of joining the Comprehensive and Progressive Agreement for Trans-Pacific Partnership (CPTPP), conclude more high-standard free trade agreements and strengthen cooperation in emerging areas such as global digital and green governance, and provide more opportunities for and inject strong impetus into world economic development.

China Council for the Promotion of International Trade (CCPIT) is China's largest national foreign trade and investment promotion agency. Participating in the reform of global economic governance system is one of the three main responsibilities of CCPIT. CCPIT has always attached great importance to coordinating with relevant departments in participating in WTO-related work. In recent years, CCPIT has made active recommendations on the WTO reform, and participated in WTO trade policy reviews. Under its guidance, the Chinese business community has expressed concerns on WTO reform issues on various international occasions, and built broad-based consensus. At this new historical starting point, CCPIT will give full consideration to both domestic and international imperatives, bear in mind the country's most fundamental interests, offer guidance to the Chinese business community on speaking up in support of free trade, safeguarding multilateralism and promoting the building of an open world economy, give full play to the role of the Chinese business community in reforming the system of global economic governance and boosting world economic recovery, and make greater contribution to stepping up efforts to foster a new development paradigm and building a community with a shared future for mankind.