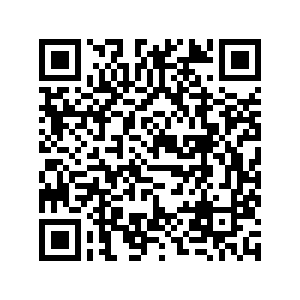 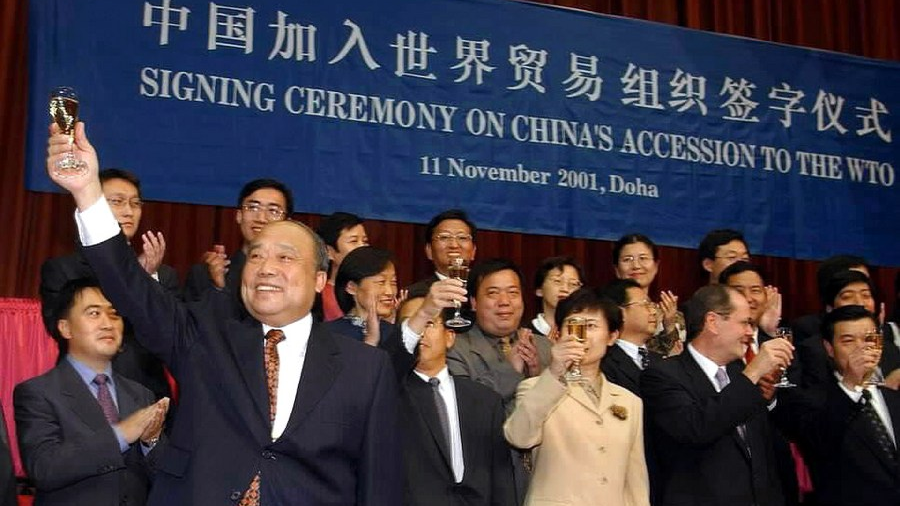 Shi Guangsheng (L, front), then Chinese minister of foreign trade and economic cooperation, celebrates with others after signing the protocol of China's accession to the WTO on behalf of the Chinese government in Doha, Qatar, November 11, 2001. /Xinhua

Shi Guangsheng (L, front), then Chinese minister of foreign trade and economic cooperation, celebrates with others after signing the protocol of China's accession to the WTO on behalf of the Chinese government in Doha, Qatar, November 11, 2001. /Xinhua

On December 11, 2001, China officially became a member of the World Trade Organization (WTO), injecting new momentum into the country's reform and opening-up – late Chinese leader Deng Xiaoping's bold policy that transformed a backward and isolated China into the world's largest trading nation. Over the course of 20 years, China increased its GDP ninefold, propelling itself to the second largest economy in the world from the sixth.

To join the WTO, China promised to adopt a market economy and open its market to the world.

Yiwu is a county-level city in east China's Zhejiang Province. Though far from the fame and size of major cosmopolitan cities like Beijing and Shanghai, Yiwu welcomes hundreds of thousands of wholesalers from around the globe every year. An impoverished rural county back in the 1980s, it is now the largest market of small commodities in the world, according to the World Bank.

Although Yiwu's development started following the reform and opening-up policy, the city did not expand to an international shopping paradise until China's accession to the WTO.

In 2001, Yiwu began the first phase of construction of the Yiwu International Trade City, which was to become the city's main hub for foreign trade. By the completion of all five of its districts in 2011, the entire market complex covered 4 million square meters with over 400,000 kinds of products exhibited.

In 2002, the China Commodities Fair, which had been held annually in Yiwu since 1995, was renamed the China Yiwu International Commodities Fair, and grew to become the biggest fair of general merchandise in the country. The fair offered opportunities to Chinese and foreign companies to widen their networks, and meet potential business partners from different parts of the world. 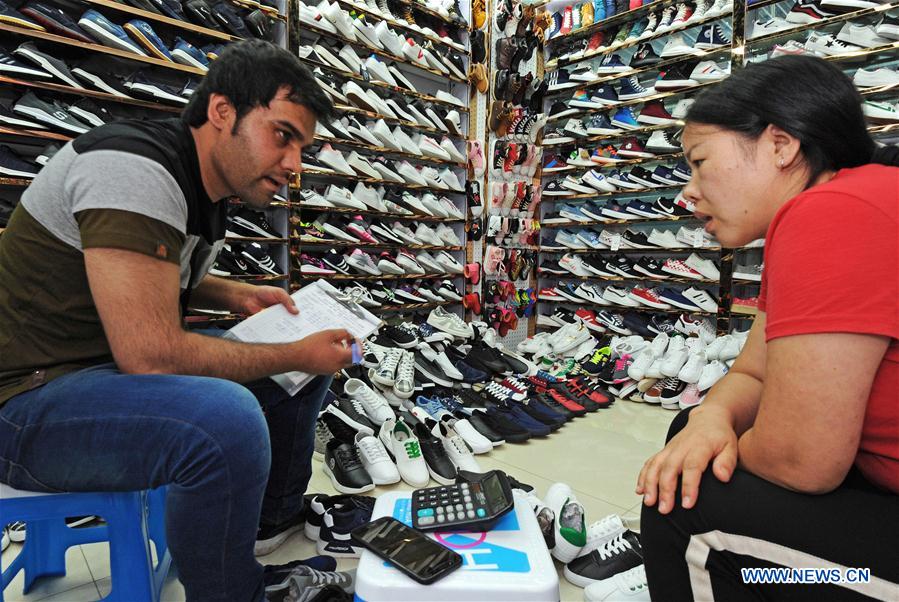 The success story of Yiwu is a testament to China's effort on liberalizing trade to honor its commitments upon entry into the WTO. In 2004, China revised its Foreign Trade Law, which stated that foreign trade dealers no longer needed to ask for the Chinese government's approval in order to do business in China. This change was a welcome sign for foreign traders. China's trade shifted to a diverse composition of not only state-owned, but foreign-invested and private enterprises. According to China's Ministry of Commerce, in 2019, private enterprises accounted for 42.7 percent of foreign trade, and foreign-invested enterprises accounted for 39.9 percent.

Additionally, China's average import tariff dropped from 15.3 percent in 2001 to 9.8 percent in 2010, fulfilling its tariff reduction commitment of 10 percent. By 2021, it was lowered further to 7.4 percent. Beside, non-tariff barriers such as quota and licensing were also removed.

From "Made in China" to "Created in China"

In 2009, an advertisement themed "Made in China, made with the world" aired on CNN Asia. The 30-second advertisement highlighted the ubiquitous presence of Chinese-made products: the "Made in China" tag can be found on everything from an American MP3 player, to a French model's fashionable dress. It reflects the undisputed fact that China has become the manufacturing center of the world.

The accession to the WTO played a significant role in the boom of China's manufacturing industry. After 2001, new orders flooded in from all over the world, attracted by China's low labor costs. Groups of Chinese farmers seeking work opportunities went to the Yangtze River Delta and the Pearl River Delta – China's major manufacturing bases.

But being the workshop of the world is not China's ultimate goal. Without core technologies, China could only make stuff for others, rather than creating its own. At the lower end of the industrial chain, China is often exploited in the manufacturing process by developed Western countries. Top tech company Apple serves as an example. The United Nations' 2014 Human Development Report shows that for every iPhone sold, Apple monopolized 58.5 percent of the profit, while Chinese manufacturers who assembled the iPhones only got 1.8 percent.

In 2005, China's 11th Five-Year Plan proposed to develop a group of internationally competitive enterprises with independent intellectual property rights and well-known brands. Then in 2015, Chinese Premier Li Keqiang issued the "Made in China 2025" strategy, aiming to support China's transformation from a manufacturing hub into a high-tech innovator in 10 years.

As a result, a number of multinational enterprises, such as Huawei, Haier, Lenovo and many others, have emerged. Huawei pioneered 5G technology, breaking up a long-time Western monopoly in the telecom industry.

At the 2021 World Manufacturing Convention in Hefei, China, quantum computing, high-end new energy vehicles, aerial imaging, panchromatic laser, memory chips and many other cutting-edge Chinese technologies were showcased. China is changing its image from a low-cost factory cranking out labor-intensive goods to a global tech leader. 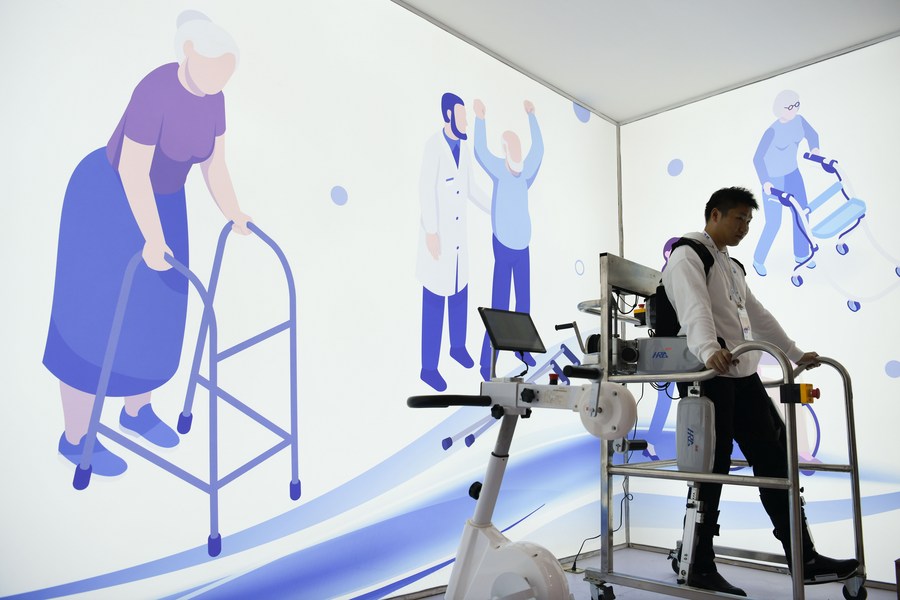 In 2010, the China and Association of Southeast Asian Nations (ASEAN) Free Trade Area (CAFTA) officially launched. More than 1.8 billion people inhabit the region, making CAFTA the most populous free trade area in the world. It is also the largest trading arrangement among developing countries in terms of market size. Since 2009, China has remained the largest trading partner for ASEAN for 12 consecutive years, and ASEAN also became China's largest trading partner in 2020. Ninety percent of the exports from the two sides have reached zero tariffs; the average tariff for ASEAN-imported goods fell from 9.8 to 0.1 percent.

To Premier Li, strengthening connectivity between China and ASEAN provides a win-win outcome. By seeing each other's development as an opportunity for self-development, both sides benefit.

China and ASEAN's common endeavors on advocating multilateralism and free trade "have made the pie of shared interests bigger; they have not only facilitated our own development, but also injected a strong impetus into the stable economic development of the region and beyond," Li said at the 23rd China-ASEAN Summit in 2020.

China's embrace of multilateralism is not limited to Southeast Asia. In 2013, China proposed the Belt and Road Initiative (BRI) to restore and expand on the basis of the ancient Silk Roads, both the land and maritime. As of now, 142 countries are part of the BRI, stretching from Asia to Europe, Africa and Latin America. From 2013 to 2020, cumulative value of trade in goods between China and BRI countries exceeded $9 trillion.

The initiative will contribute to the building of an inclusive and balanced regional cooperation framework that delivers benefits for all, according to Zhang Dejiang, former chairman of the Standing Committee of the National People's Congress.

"China is the initiator, but this is not a one-man show. The initiative is about win-win cooperation and common development, not a solo performance or a zero-sum game. The Belt and Road are not private exclusive roads but wide and open avenues for us all," Zhang said at the Belt and Road Summit in 2016.