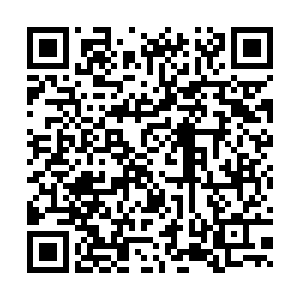 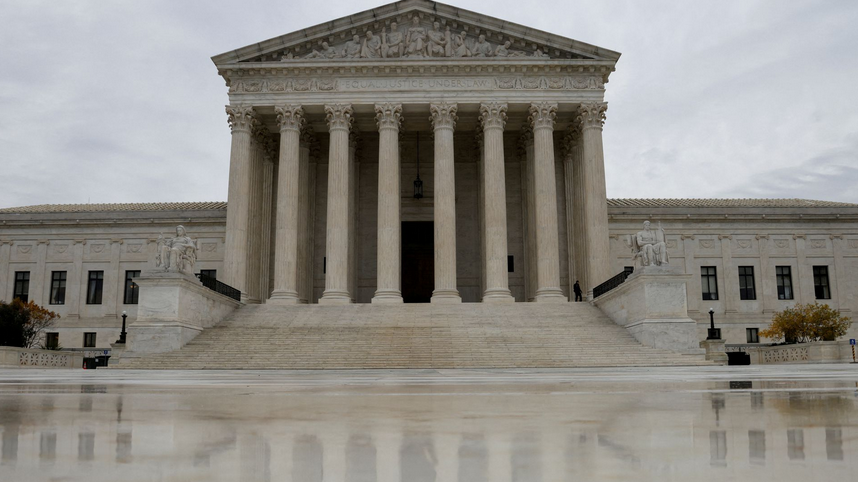 The U.S. Supreme Court on Friday left in place a ban on most abortions in Texas but allowed a legal challenge to proceed, with the fate of the Republican-backed measure that allows private citizens to enforce it still hanging in the balance.

The justices in an 8-1 ruling lifted a block on lower court proceedings and permitted a lawsuit by abortion providers, which may pave the way for a federal judge to block the nation's toughest abortion law at least in part. The conservative-majority court on September 1 declined to halt the law on the day it took effect. It also dismissed on Friday a separate challenge by President Joe Biden's administration.

The law bans abortions at around six weeks, a point when many women do not yet realize they are pregnant, with no exception for pregnancies resulting from rape or incest.

The Supreme Court has yet to decide another major abortion case from Mississippi that could lead to the overturning of the landmark 1973 Roe v. Wade ruling that legalized the procedure nationwide. Mississippi's law, blocked by lower courts, bans abortions at 15 weeks of pregnancy. The conservative justices during arguments on December 1 indicated sympathy toward Mississippi's law and potential support for overturning Roe.

Abortion providers and Biden's administration had asked the Supreme Court to block the Texas law while the litigation continues, but the justices opted to leave it in place for now.

Friday's ruling, authored by conservative Justice Neil Gorsuch, did not directly address the broader questions raised in the Mississippi case. The court's decision not to block the Texas law provided another signal that its majority may be inclined to curb abortion rights.

White House Press Secretary Jen Psaki said Biden is "very concerned" that the justices left the Texas law in place and reiterated his support for Democratic-backed legislation that would buttress abortion rights nationwide.

The Texas law enables private citizens to sue anyone who performs or assists a woman in getting an abortion after embryo cardiac activity is detected. Individual citizens can be awarded a minimum of $10,000 for successful lawsuits. Biden's administration has called this a "bounty." 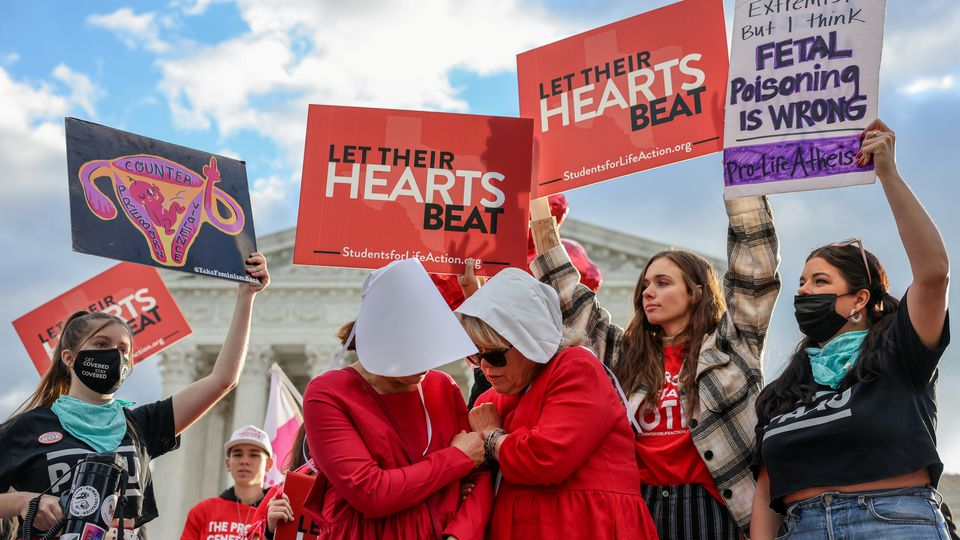 Women dressed as handmaids demonstrate in front of anti-abortion protesters outside the United States Supreme Court as the court hears arguments over a challenge to a Texas law that bans abortion after six weeks in Washington, D.C., U.S., November 1, 2021. /Reuters

Women dressed as handmaids demonstrate in front of anti-abortion protesters outside the United States Supreme Court as the court hears arguments over a challenge to a Texas law that bans abortion after six weeks in Washington, D.C., U.S., November 1, 2021. /Reuters

"It's stunning that the Supreme Court has essentially said that federal courts cannot stop this bounty-hunter scheme enacted to blatantly deny Texans their constitutional right to abortion. The court has abandoned its duty to ensure that states do not defy its decisions," said Nancy Northup, president of the Center for Reproductive Rights, which challenged the law on behalf of abortion provider Whole Woman's Health.

The measure is one of a series of restrictive Republican-backed abortion laws pursued in states in recent years.

Republican Texas Attorney General Ken Paxton, who defended the law, welcomed the justices leaving it in place, promising on Twitter to defend it and "FIGHT FOR LIFE!!!"

"We celebrate that the Texas Heartbeat Act will remain in effect, saving the lives of unborn children and protecting mothers while litigation continues in lower courts," added Marjorie Dannenfelser, president of the Susan B. Anthony List, a group opposing abortion.

The ruling stated that a narrow lawsuit is allowed under a 1908 Supreme Court precedent that said state laws can be challenged in federal court by suing state officials.

Texas had sought to exploit a loophole in the 1908 ruling by saying no state officials could enforce the law. The Supreme Court said challengers could pursue their case by naming state licensing officials including members of the Texas Medical Board and Texas Board of Nursing as defendants.

Abortion rights advocates said being able to sue only the licensing officials may not allow for fully block the law. A five-justice majority ruled that neither state court clerks nor the Texas attorney general could be sued as Whole Woman's Health sought. Conservative Chief Justice John Roberts and the court's three liberals disagreed, saying those officials should be considered proper defendants.

"The nature of the federal right infringed does not matter; it is the role of the Supreme Court in our constitutional system that is at stake," Roberts wrote.

Liberal Justice Sonia Sotomayor blasted the court for failing to "put an end to this madness" and warning that other states could try to copy the Texas enforcement mechanism.

"The court thus betrays not only the citizens of Texas but also our constitutional system of government," Sotomayor wrote in an opinion joined by the two other liberal justices.

The case now returns to U.S. District Judge Robert Pitman. Separately, a state court judge ruled on Thursday that the law violates the Texas constitution with its private-enforcement mechanism.