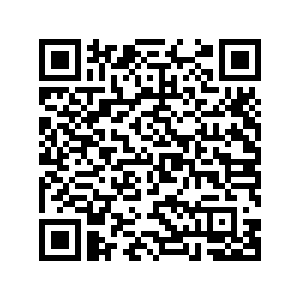 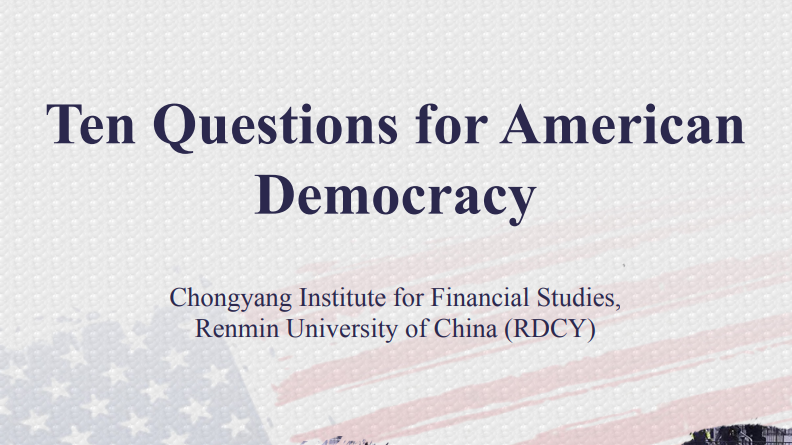 The cover of the report "Ten questions for American democracy" from the Chongyang Institute for Financial Studies at Renmin University of China.

The cover of the report "Ten questions for American democracy" from the Chongyang Institute for Financial Studies at Renmin University of China.

Editor's note: Joel Wendland-Liu is an associate professor of the Integrative, Religious and Intercultural Studies Department of Grand Valley State University in the U.S. The article reflects the author's opinions and not necessarily the views of CGTN.

A recent report from the Chongyang Institute for Financial Studies at Renmin University of China poses 10 questions about the decline of U.S. democracy. One of the questions posed by the report is: Can American democracy really be descried as the majority of Americans ruling their own country or has minority rule "metastasized"?

Let's look at what the report means with this question. First, it traces ideological claims about U.S. democracy to Lincoln's Gettysburg Address. In that speech, Lincoln copied the opening of the Constitution to identify the political establishment as a "government of the people, by the people, and for the people."

Since 2000, however, there have been two instances where Republican Party presidential candidates claimed office with a clear minority of votes (Bush in 2000 and Trump in 2016), and two instances where Republican Party candidates have attempted to or succeeded in winning power through non-electoral means (the 2000 Supreme Court decision on behalf of Bush and the Capitol riots on January 6, 2021).

The report shows that two persistent features of U.S. elections—the Electoral College and the practice of "gerrymandering" —allows the Republican Party to remain dominant on the national and state levels despite returning only minorities in the actual number of votes.

In addition, the report briefly explores how corporations and the wealthy control the political process through their donations to the major political parties.

Citing U.S.-based watchdog organizations, the report notes that "in the 2004 general election, the U.S. presidential election amounted to $880 million. In 2016, it climbed to $1.5 billion. In 2020, the presidential campaign between Biden and Trump cost more than $4 billion." The report also points out that Congressional elections in 2020 totaled close to $9 billion.

Even more insidious is the fact that most everyday Americans have little knowledge of or influence over thousands of policies enacted every day that favor the interests of the wealthy, powerful and well-connected corporations and individuals.

The endemic corruption and procedural limits on basic principles of democracy ensure that "the people's will is becoming more difficult to realize." 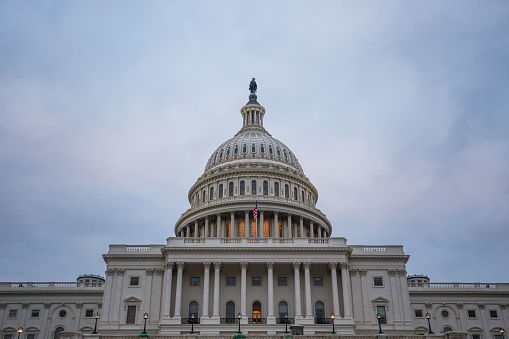 The snapshot of the past 20 years as sketched in the report is an accurate one. No serious American can dispute it, though many will insist that these are new features and can be overcome without changing any of the rules, systems or processes already in place.

The truth, however, is that these are not new features of the U.S. political system. Attempts to curtail corporate influence with greater transparency over political donations in the 1990s did not last, and nor did they substantively alter the infusion of cash into the process.

Indeed, most Americans have been and are more openly cynical about U.S. democracy, even as they simultaneously ignore the hypocrisy of appeals to democracy to justify U.S. interventions in other countries.

The Electoral College was created in 1803 specifically to ensure the power of the minority of the wealthiest capitalists (Southern enslavers) over the U.S. government. Americans have been complaining about gerrymandering ever since the representational system was created and could be manipulated. To this list of procedural barriers to democratic and social progress could be added the Senate filibuster, a rule that allows a minority of senators to block any legislation. Further, state laws allow millions of Americans to be denied even the right to vote through arbitrary exclusions from voter rolls, modern day poll taxes and other barriers to access to polling places. Each of these mechanisms has been a blight on social progress ever since their creation and that is the real reason why they are allowed to persist.

At some point, Americans will have to accept the political system they live in functions primarily to guarantee wealth and power to the already wealthy and powerful.

This contradictory and hypocritical system produces little more than cynicism. Most Americans believe that without mass social unrest or millions of dollars, they can almost never influence public policy or law. For many working-class Americans, the condition of cynicism causes them to elect to withdraw from the system and futilely demand that the government leave them alone. These Americans have been convinced by state-ideological apparatuses that they are not smart enough to lead on policy or to truly realize the idea of a "government by the people."

Meanwhile, the power of oligarchy is further entrenched.

The solution lies not in opting out, but to struggle with a new idea: that the people, the working class, have the right to demand that it actually govern. End the system of wealth oligarchy and cynical corruption. Combine people and working-class power with the strategic demands to eliminate the Electoral College and Senate filibuster, create popular control over election districts and guarantee the right to vote with easy access to cast ballots.