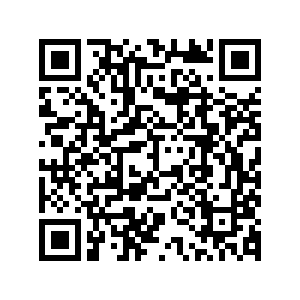 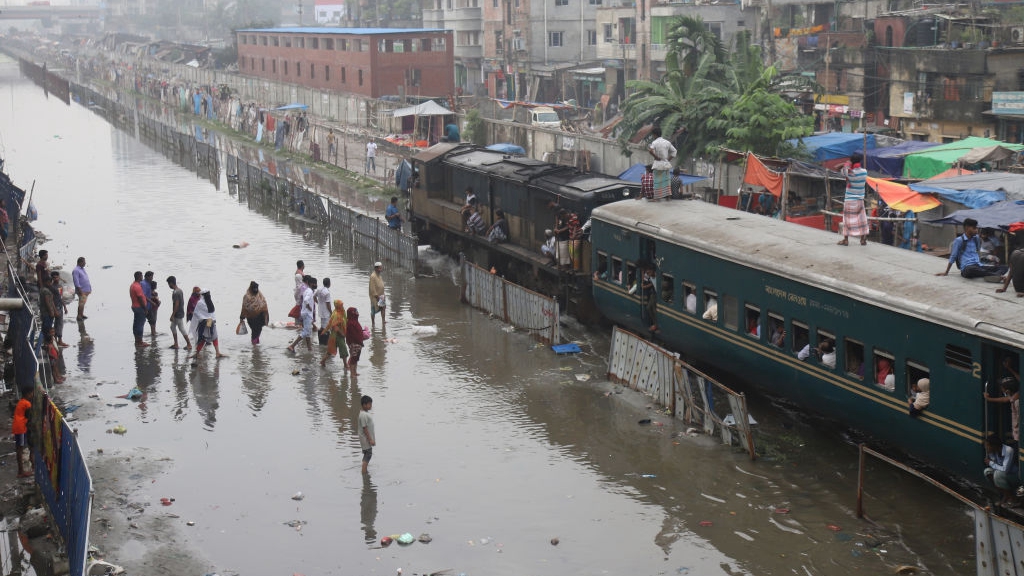 The Alambagh train is submerged in water due to heavy rains causing flooding in Jurain district; the inhabitants were affected when moving from one place to another in Dhaka, Bangladesh, October 7, 2021. /Getty

The Alambagh train is submerged in water due to heavy rains causing flooding in Jurain district; the inhabitants were affected when moving from one place to another in Dhaka, Bangladesh, October 7, 2021. /Getty

Editor's note: Dennis J. Snower, president of the Global Solutions Initiative, is a professor at the Hertie School of Governance in Berlin, senior research fellow at the Blavatnik School of Government at Oxford University, and a non-resident fellow at the Brookings Institution. The article reflects the author's opinions and not necessarily those of CGTN.

The world failed at last month's United Nations Climate Change Conference (COP26). And the biggest failure is one that virtually everybody assembled in Glasgow overlooked. The system in place to address climate change – comprising a constellation of economic, political, and social arrangements – is inappropriate to our global goals.

To shed light on this systemic failure, consider an analogy. Your neighborhood is threatened by an approaching wildfire. Managing the crisis requires mobilizing various firefighting and emergency services, as well as help from businesses and local residents to protect property. But these parties do not cooperate.

Some citizens show up with pails of water. Some businesses donate fire extinguishers. Some locals stage protests against proposed evacuation orders. Meanwhile, local politicians hold a town hall meeting, soliciting pledges from various parties that no one is bound to fulfill. But the sum of the pledges just about keeps alive hopes that your neighborhood will remain safe.

That is where we stand today on climate change. The fundamental problem is that our system is not designed to deliver outcomes consistent with the 2015 Paris climate agreement's target of limiting global warming to 1.5 degrees Celsius above pre-industrial levels.

If fulfilled – a big if – the pledges in the Glasgow Climate Pact put the world on course for a temperature increase of between 2.5 degrees Celsius and 2.7 degrees Celsius by the end of the century. That would be disastrous.

Our economies are designed to be GDP-maximization machines, our businesses aim to maximize shareholder value, and our politicians seek to maximize voter approval. Our societies are buffeted by the currents of consumerism, nationalism, populism, and environmentalism. In this system, economic prosperity and political success have become decoupled from social stability and environmental health.

In the face of such systemic failure, we should not feel encouraged by examples of successful green businesses and of investors decarbonizing their portfolios. Without government intervention requiring all firms to be environmentally responsible, the green business of some companies will allow others to act unsustainably. Combating climate change requires deliberate collaboration between business and government.

Fortunately, we already know what needs to be done to achieve the necessary collective mobilization and end the current climate failure. Leaders should follow the late Nobel laureate Elinor Ostrom's core design principles for managing the commons effectively.

First, a shared identity and purpose are vital. Limiting global warming is an inherently global goal: greenhouse gases (GHGs) emitted anywhere affect people everywhere. We therefore need to develop a sense of common identification with this goal. But the COP26 negotiations were structured to pit national interests against one another, rather than promoting a sense of humanity striving together to protect our planet. 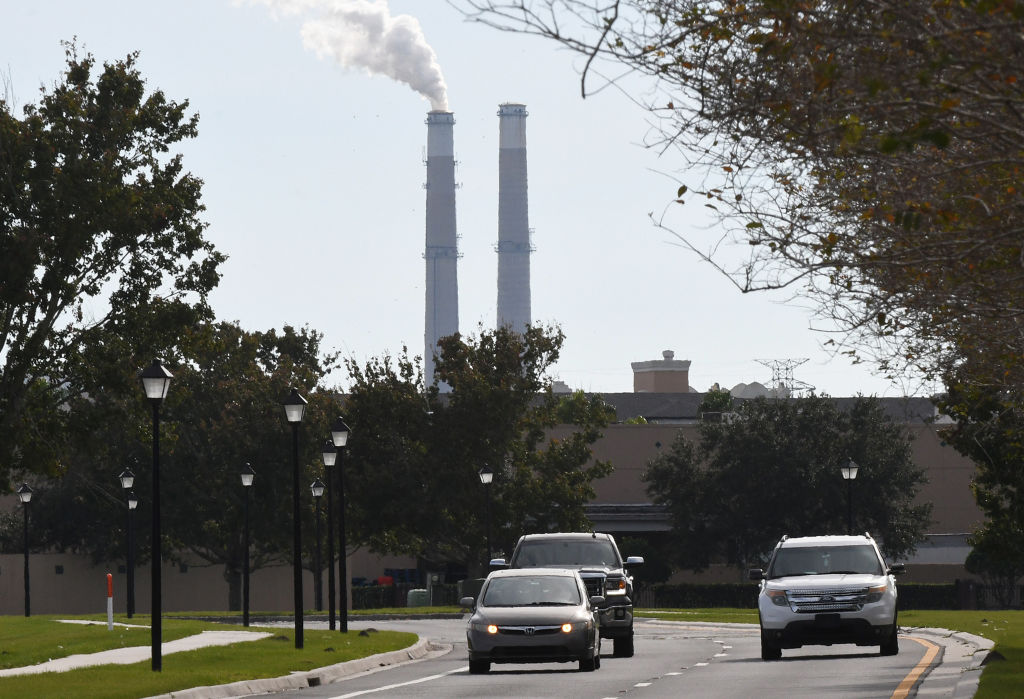 Cars pass by the twin smokestacks at the Stanton Energy Center, a coal-fired power plant in Orlando, U.S., November 14, 2021. /Getty

Cars pass by the twin smokestacks at the Stanton Energy Center, a coal-fired power plant in Orlando, U.S., November 14, 2021. /Getty

A second key principle is to ensure that the costs and benefits of climate action are distributed in a way that leaves all parties better off. Most experts agree that efficient decarbonization would require a global carbon price that is aligned with the Paris agreement's goals. Because a ton of carbon dioxide causes the same damage to the environment no matter where it is emitted, it makes sense in theory for everyone to face the same carbon price.

This would prevent the problem of "carbon leakage," which occurs when a reduction in carbon dioxide emissions in one country leads to increased emissions in another country that has a lower carbon price. The same holds for businesses.

But implementing a global carbon price – say, through carbon taxes or emissions-rights trading – may be socially unsustainable. The poor and the middle classes may find it difficult to afford the higher prices of carbon-intensive goods and services, while the resulting decline in employment in carbon-intensive sectors may leave workers without jobs and communities without an economic base. COP26 was not designed to deliver the social prerequisites for efficient climate action.

Third, successful climate action requires fair and inclusive decision-making, so that all parties are involved in the decisions that affect them. Many have claimed that the COP26 negotiations excluded those most affected by the impending climate catastrophe – and those in positions of power (often elderly, white, male, and privileged) have a vested interest in keeping it that way.

This approach disempowers those most affected by global warming – typically, young people from developing countries and marginalized cultures. But they frequently have the insight, local knowledge, and, most of all, the sense of urgency that comes from the prospect of facing the most immediate consequences of climate change.

Several other principles are key to addressing global warming effectively. Measuring and reporting clear outcomes, year after year, permits the monitoring of agreed actions. Graduated rewards for helpful actions and graduated sanctions for unhelpful ones also will be needed.

In addition, climate action requires fast and fair conflict-resolution mechanisms involving trusted impartial mediators. The authority to self-govern, via the subsidiarity principle, should be recognized at the supranational level, in all relevant international forums and organizations.

COP26 made little, if any, attempt to satisfy these requirements. Governments reached no agreement on how to measure GHG emissions, and no internationally recognized reporting mechanisms are in place.

There are no rewards or sanctions for national performance on climate change, because the COP26 recommendations are not legally binding. Nor does the world have swift and impartial conflict-resolution mechanisms regarding climate action.

And although countries' sovereign authority is recognized, the absence of a polycentric governance system means that climate policy from the international to the local level remains neglected, inconsistent, and incoherent.

Of course, fulfilling these requirements is a tall order and will not happen overnight. But the next generation has a right to expect that we try to create the social, economic, and political prerequisites for successful climate action.