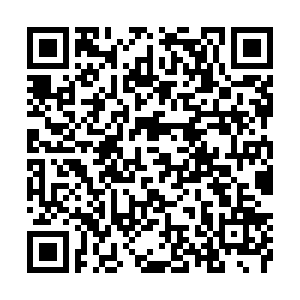 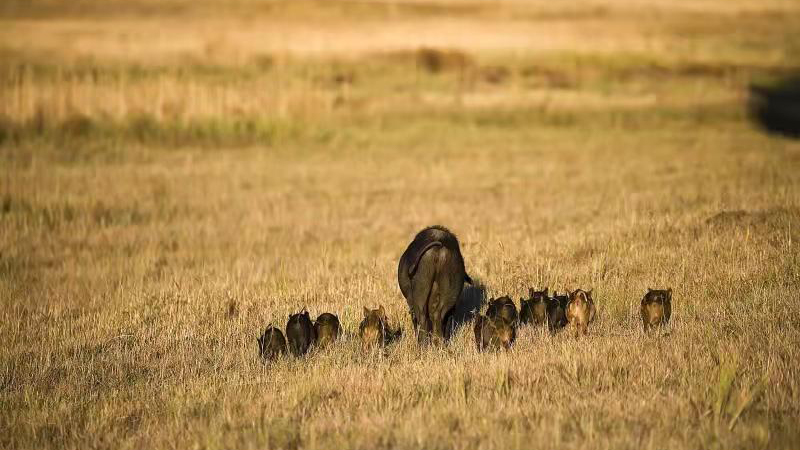 Crop-eating wild boars have been a headache for local villagers for years in Tongjiang, a mountainous county nestled in southwest China's Sichuan Province.

"If they don't come tonight, they will come tomorrow night, or the day after tomorrow. They will come anyway," said villager Ma Xingquan. He also said that wild boars will not stop coming down to the village until there's nothing left to eat in the field.

Another local, Sheng Daxiu, said that this year wild boars have "visited" their village more often than they did in the past years. She said a villager's cornfield was severely damaged by wild boars. Some villagers replanted parts that had been rooted by the animal, but wild boars came again and pulled out the new seedlings.

With limited food in the mountain forests, most of them are starving. So they come down from the mountains to feed themselves.

Weighing around 150 kilograms and measuring over one meter in length, one wild boar can run as fast as 40 kilometers per hour. In northeast China, the wild boar is ranked as the most ferocious animal in the wild, ahead of bears and tigers. 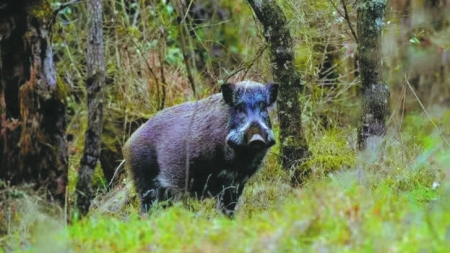 Yu Xiuying, a Tongjiang resident, says that she takes a long knife whenever she goes to walk in the mountains, for fear of meeting a wild boar. She has often heard suspicious sounds in the forest. "That might come from those wild boars."

Tongjiang planned in July to cull 750 wild boars in 2021 to bring down the numbers of the bulky animal in the forest.

A hunting team, the only team that is licensed to use guns in the province of Sichuan, was sent on their first mission to hunt wild boars last month. They killed eight wild boars in two and a half days.

Lacking professional hunters and guns, the county decided to buy modern trapping tools, train more hunters and apply for the permit for them to carry a gun, and so that they could control the wild boar population more effectively.

Wild boars are not picky eaters and 90 percent of their diet is plants, including tender branches, fruits, roots and wild vegetables. They eat carrion too when there are not enough plants around.

Their natural behaviors of rooting, wallowing and rubbing are crucial in spreading plant seeds and plowing soil in the forest. In winter, small birds and animals can find seeds or worms in the soil when wild boars clear the snow or ice on the surface.

Wild boars can reproduce twice a year, with four to 10 piglets per litter. These piglets will serve as food for large predators such as tigers, leopards and wolves.

Linking plants and animals, they are important to the ecosystem with their mere existence. In China, wild boars have been protected by law for two decades. Unauthorized hunting could lead to jail even if the wild boars that were targeted caused damage in the first place.

About 750 kilometers northeast from Tongjiang, a couple was recently sentenced for illegal hunting in Xichuan County in central China's Henan Province. They killed eight wild boars with an electric fence and other banned tools in their farmland from May to July because the creature destroyed nearly seven hectares of crop – the main livelihood of the family.

As well as suspended jail terms – the husband was given 18 months and his wife 12 months with two years' probation – they were fined 4,000 yuan ($627) for ecological damage and required to write statements of remorse. 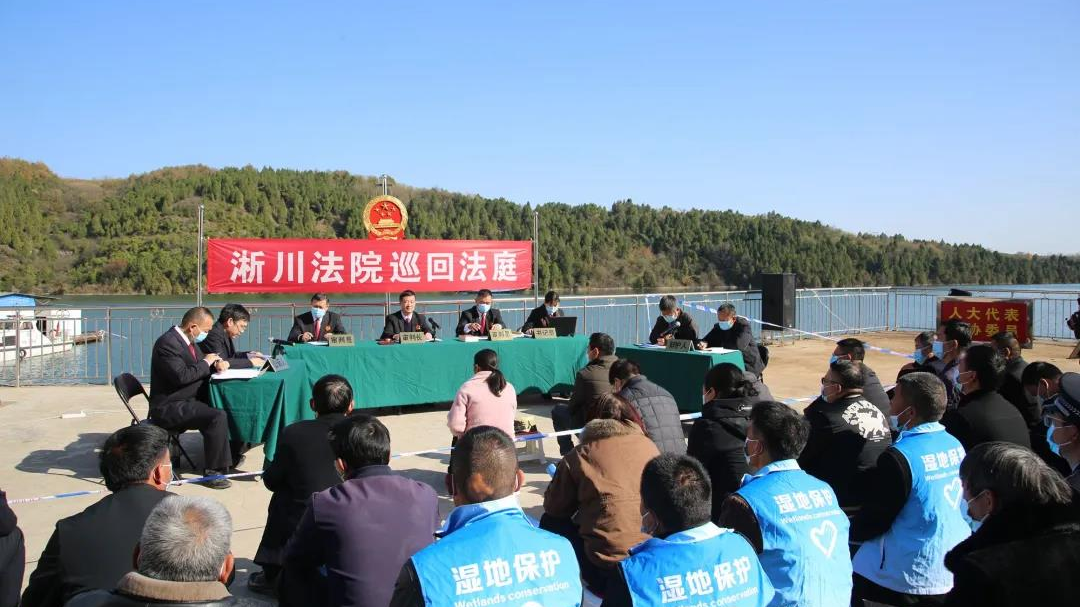 To reduce people's antipathy to wild boars, China's National Forestry and Grassland Administration launched trials for prevention and control of the animals in 14 provinces and regions in 2021. One of the key tasks of the program is to design a suitable wildlife damage compensation scheme.

In March, Tongjiang County established a compensation scheme for the damage caused by wild animals. With a special fund of at least 400,000 yuan per year, the government buys services from an insurance company which compensates local people for their losses.

As soon as the scheme was introduced, locals' claims went through the roof. Among the 700-plus claims made during the past eight months, 95 percent emanated from issues related to wild boars.

Many pilot areas have started similar practices. However, most of the areas seriously affected by wild animals are remote and underdeveloped, with limited local financial resources. Therefore, the National Forestry and Grassland Administration is pushing to allocate funds to cover wildlife-related expenses at local levels.

Places reporting damage by wild boars have one thing in common: They are all close to forests that are home to wild boars.

"One fundamental reason for human-wildlife conflicts is that we have damaged their natural habitats," said wildlife lover Song Dazhao, who founded the China Felid Conservation Alliance in 2013, an organization focused on protecting China's wild cats.

Song specializes in protecting leopards, which are predators of small-sized wild boars. His team calculated the number of wild boars, and experimented with ways to keep them from damaging farmland in Heshun County, in north China's Shanxi Province, in 2018 and 2019.

By putting up barbed wire, installing warning lights and loudspeakers in the farmland close to forests, they hoped that the wild boars would get the idea that farmland is too dangerous to approach. 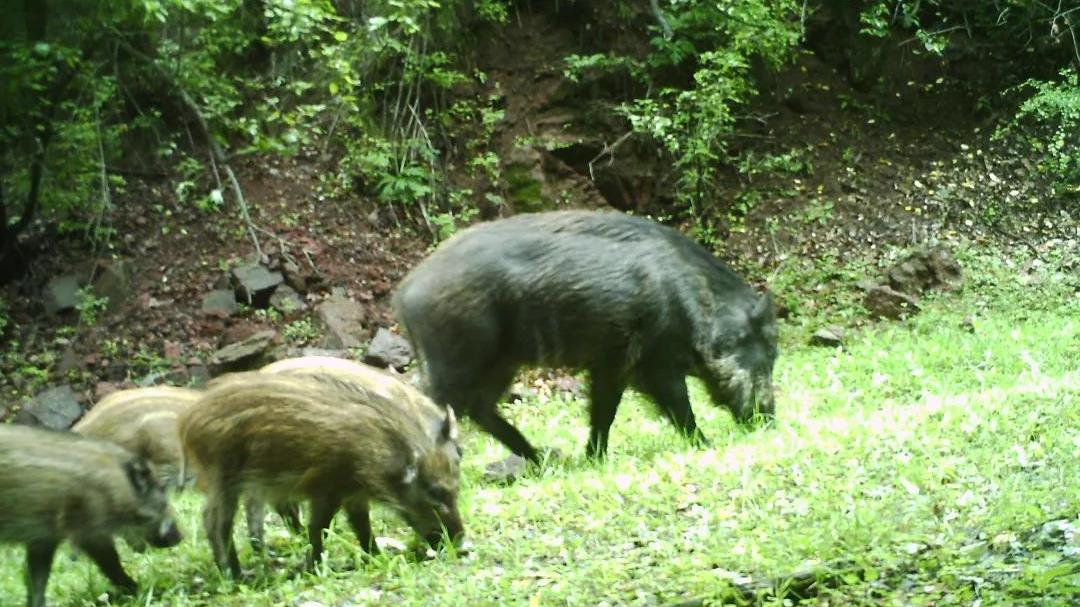 Song said that increasing appearances of wild boars recently might be related to a strict ban on wildlife trading and consumption last February, but we cannot jump to the conclusion that they are "overflowing." More data is needed to define the real wild boar situation in China, including the population, capacity of habitats and number of natural enemies.

As affected areas turn to hunting to mitigate the conflict, Song doubts its effectiveness.

"If we hunt too many, they might become extinct like those in some European countries decades ago; if we don't hunt enough, they might cause damage as before," Song said.

Song said human-wildlife conflicts will increase with effective conservation efforts and we need to live with them.

Earlier in the month, the National Forestry and Grassland Administration released the list of terrestrial wildlife with important ecological, scientific and social value, the wild boar is not on the draft, which is open to public comment until December 25.