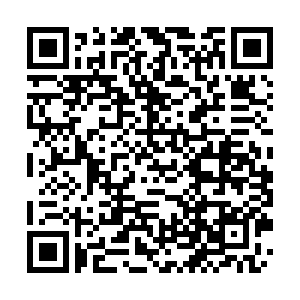 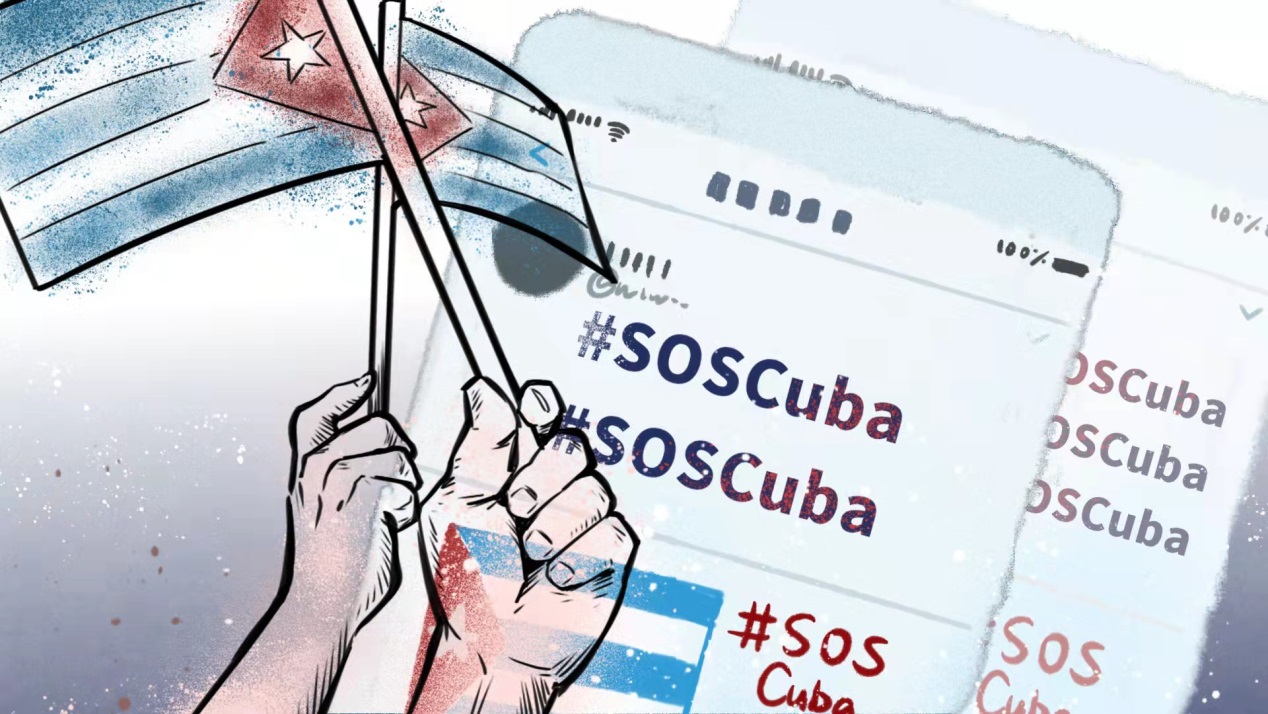 Editor's note: America's war game has long gone beyond hot conflicts that take military operations as the mainstay. The country, as the unipolar hegemon, became even bolder in carrying out interventions overseas and developed what is known as "hybrid warfare". For all the short-term benefit the U.S. has reaped, just as much long-term damage is inflicted upon itself. Episode 8 is on the hidden crisis for American hegemony.

For the Cuban capital Havana, known as the pearl of the Caribbean, July 2021 was an unsettling summer month. Thousands of Cubans took to the streets and confronted the police, marking the first anti-government mass protest in the country since 1994.

Strangely, prior to the protest, the hashtag "SOSCuba" was seen on American social media. While many newly-created accounts kept forwarding unverified information, comments supporting the Cuban government were banned.

During the protest, Western media actively propagated in their manipulative reports. Some, including The New York Times, even captioned a photo of a pro-government rally as an anti-government one, while deliberately left out the effort of the Cuban government to engage with communities.

After the protest, American politicians continued to instigate Cubans to fight for their "legitimate rights" through riots, steering the focus of confrontation away from the economic to the ideological domain.

Under pressure, the first secretary of the Cuban Communist Party and Cuban President Miguel Díaz-Canel bluntly claimed it was the U.S. that funded and instigated the unrest, and called on the Cuban people to walk onto the streets to "defend" the revolution.

In fact, it was not the first time that the U.S. had intervened in Cuba's internal affairs. Over the past 60 years, Washington's economic blockade has put Cuba in constant economic difficulty. Meanwhile, the U.S. has long been funding anti-government forces within Cuba and attempting to stir up social unrest in the name of promoting democracy in a bid to topple the incumbent government and develop pro-America proxies.

This "Havanan Summer" staged by the U.S. is a typical color revolution. Its purposes and patterns are increasingly known in this day and age. Nevertheless, its harm is usually underrated as military confrontation is rarely involved. The color revolution is a form of war. It constitutes an important component of America's hybrid warfare – the main instrument to maintain America's hegemony and global dominance in the post-Cold War era.

What is hybrid warfare?

America's war game has long gone beyond hot conflicts that take military operations as the mainstay. After the Cold War, the country, as the unipolar hegemon, became even bolder in carrying out interventions overseas and developed what is known as "hybrid warfare" that uses all dimensions of state power and is more secretive in approaches. 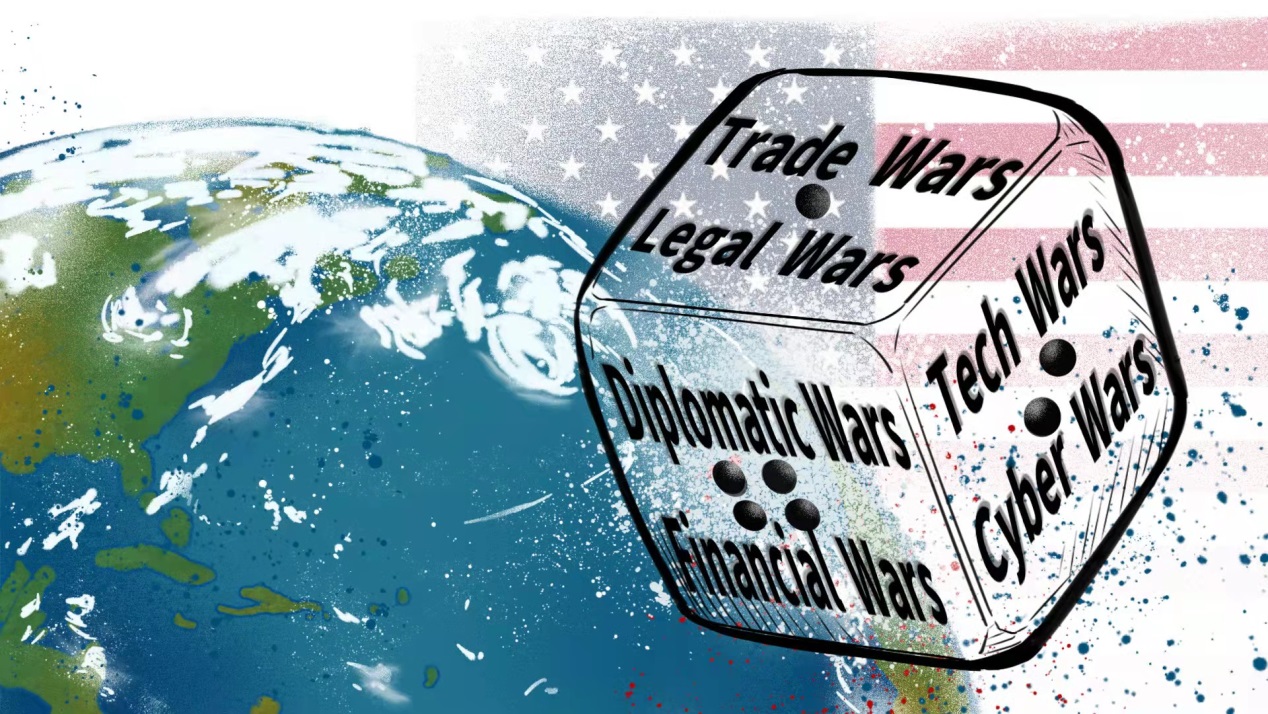 This new form of warfare is diverse in pattern and intensity. It is built on America's military strength and what the country has achieved through hot wars, but transcends the traditional framework of military confrontation with its pattern and intensity totally dependent on America's national interests. The disastrous consequences it entails such as panic, social disorder, economic crises, political division and civil wars are borne by the people in the target country.

A prominent feature of America's hybrid warfare is the strategy to break the enemy from within, meaning to clandestinely develop a fifth column in the target country under the cover of ideology and humanitarianism, with the aim to strike a blow to the country or even crush it through non-military means.

On the one hand, Washington, instigating propaganda and with financial support, tries to develop pro-America proxies among the political elites and authorities of the target country, nurture anti-government organizations within society, and remotely control the country's political and social agendas.

On the other, the U.S. exerts long-lasting ideological influence to erode traditional values and moral standards among people in the target country and reinforce their identity with American values – all in an attempt to make the public believe that Washington's intervention is a "just deed" where an advanced civilization tries to change a backward one for the better.

When the time is ripe, Washington can collude with the fifth column to put economic, political, diplomatic and psychological pressure on the target country, escalate its social and political malaise, stage mass unrest and even overthrow its government.

If none of this works, the U.S. military may force its way into the country in the name of protecting human rights, democracy and commercial freedom or tackling weapons of mass destruction.

Attack on all fronts

In the past 50 years, the tentacles of America's hybrid warfare have been felt on all fronts. The U.S. has played a role in almost all conflicts, chaos, fears and crises across the world. According to statistics from the China Society for Human Rights Studies, between the closing year of World War II and 2001, out of the 248 military conflicts that had occurred in 153 countries and regions, 201, or around 81 percent, were started by the United States.

The Middle East was undoubtedly the hardest hit region. From the wars in Iraq, Libya and Syria, to the Arab Spring, the U.S. turned the region into a testing ground for its hybrid warfare.

Central Asia, due to its indispensable significance in geopolitics and energy strategies, was once a playground for the American-style hybrid warfare, too. Between 2003 and 2005, anti-government forces in Georgia, Ukraine and Kyrgyzstan mounted mass protests at the instigation of the U.S., leading to regime change.

Another target of Washington's hybrid war efforts is Latin America, where the "Latin America Autumn" orchestrated by Washington in 2019 led to even more wide-spread chaos than "Havanan Summer."

Southeast Asia was not left untouched either. Washington's political intervention in countries such as Thailand, Cambodia and Myanmar has never stopped, at times even resulting in civil wars.

The top targets of America's hybrid warfare at the moment are apparently China and Russia. On Russia, the U.S. has launched propaganda campaigns through international media and online platforms to tarnish its international image and disturb social and political ideologies within the country. In addition, it actively supported the political opposition and social activist groups in finding the opportune time to stir up trouble, and imposed various economic sanctions to wreck Russia's economic and financial systems.

America's hybrid war efforts against China, which have been going on for decades, have become increasingly aggressive over the past few years. From clamping down on Huawei-represented Chinese high-tech firms to unilaterally starting trade and tech wars; from muddling the South China Sea in the name of freedom of navigation to spreading rumors about human rights in Xinjiang Uygur Autonomous Region and Tibet Autonomous Region; from fueling and funding unrest in Hong Kong to repeatedly using the Taiwan question as a bargaining chip against China, the U.S. cooked up one tactic of hybrid warfare after another in an attempt to destabilize China, slow down its development, and curb its influence on the global arena.

The world has suffered from the American hybrid warfare too much and for too long. While many countries and societies are plunged into the quagmire of conflicts, Washington profits from their misery. 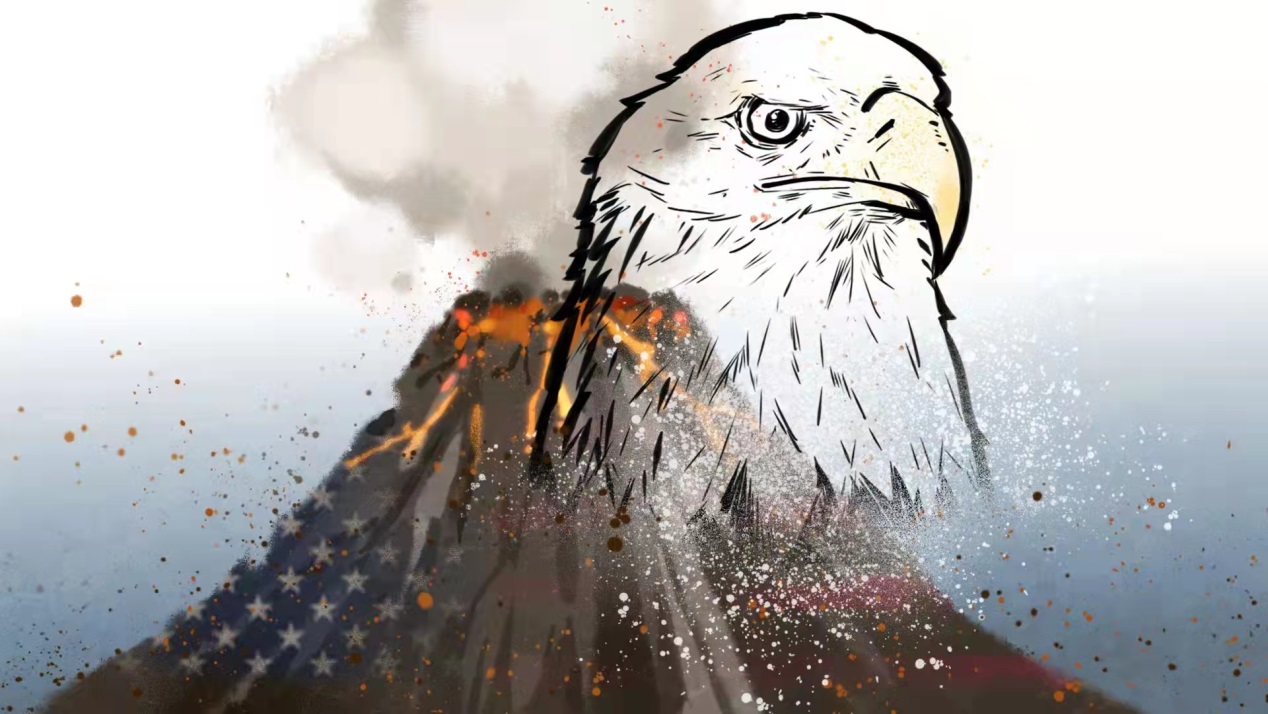 However, while hybrid wars have helped the U.S. to contain its rivals, they are also nibbling away at the foundation of American hegemony. For all the short-term benefit the U.S. has reaped, just as much long-term damage is inflicted upon itself.

First, hybrid warfare has weakened America's international prestige and accentuated its dwindling confidence. While hybrid wars are said to bring about democracy, better human rights and social progress, they usually end up with political decline, humanitarian disasters and social decay. This in turn hollows out the basis of American values, making people doubt Washington's empty promises and grand rhetoric.

Hybrid wars running rampant indicate that hypervigilance and the abuse of deterrent power is the signature of America's international existence and its mentality in dealing with international relations. As a result, its imagined enemies far outnumber the real ones. Such a sense of insecurity will only grow with the fall of American hegemony, wearing down Americans' confidence and further polarizing its political landscape.

Second, hybrid warfare has set many countries against the U.S., and driven Washington and its allies apart. Across the world, victim countries of open or secret U.S. intervention and manipulation are not in the minority. America's hybrid warfare, seen as a stumbling block for these countries' development, has drawn vehement international criticisms and will inevitably lead to ever bitterer hatred.

Even America's Western allies are taking preventative steps to shield themselves. According to media reports, in 2021, France's Ministry of National Education established Le Laboratoire de la République. It's a values-based think tank with a mission to shield France from color revolutions and to prevent the import of wokeism – a form of identity politics that pitches ethnic groups against each other, from the United States.

Furthermore, seeing their own global interests hurt by America's hybrid war efforts, American allies, for instance, the European Union, have begun to seek greater diplomatic and military autonomy, leading to the technical disintegration of the hegemonic alliance system.

Third, hybrid warfare has bred global terrorism and intensified the clash of civilizations. It will eventually backfire at the U.S. As the Secretary of the Security Council of Russia Nikolai Patrushev points out, it is America's hybrid warfare in the Middle East that has led to the emergence of terrorism and Islamic extremism.

Terrorist attacks on American homeland are to a large extent a result of the clash of civilizations provoked by Washington. Ironically, America's more recent counterterrorism wars, rather than eliminating terror attacks, spread terrorism across the world. Nurtured by the U.S., terror threats will remain a scourge for the U.S.

Lost in the clash of civilizations, America will be heading towards an even more uncertain destiny. Perhaps, this is exactly what this "city on a hill" that honors American exceptionalism fears the most.