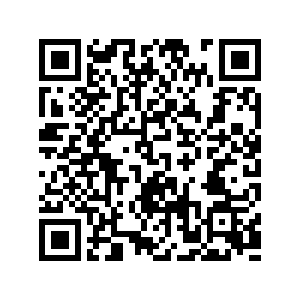 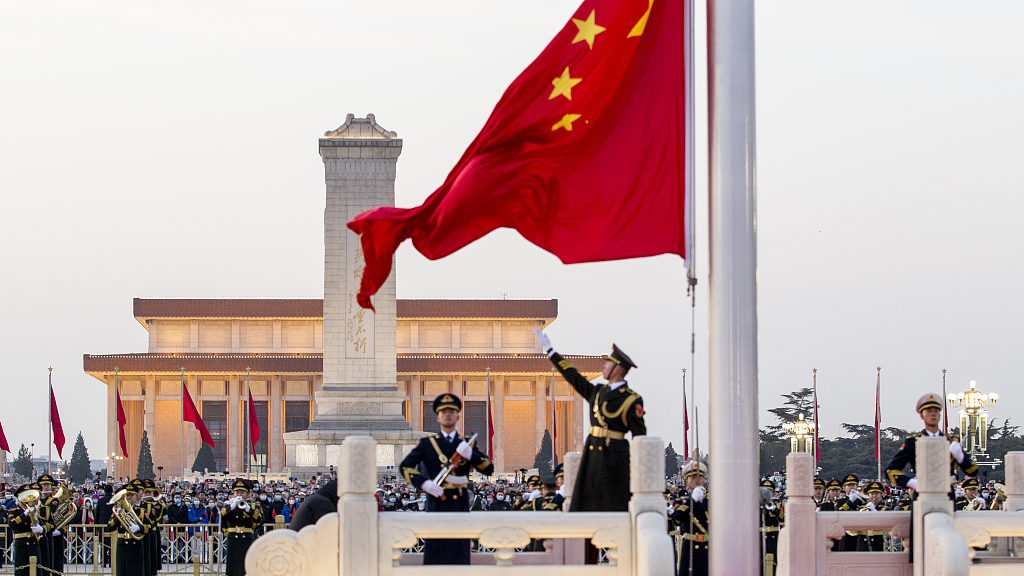 The first national flag-raising ceremony of the New Year held at Tian'anmen Square in Beijing, capital of China, January 1, 2022. /CFP

The first national flag-raising ceremony of the New Year held at Tian'anmen Square in Beijing, capital of China, January 1, 2022. /CFP

Editor's note: David Ferguson is a senior translation editor at Foreign Languages Press. The views expressed in this video are his and not necessarily those of CGTN.

At 7 p.m. on December 31, on the eve of 2022, Chinese President Xi Jinping gave a statesmanlike address to the nation documenting the achievements of the past 12 months and the plans for the coming year. His speech dealt with all the great issues facing China today.

He first noted a point of consummate importance – that this turn of the year represents the convergence of China's Two Centenary Goals. The first of these was achieved in 2021 with the creation of a moderately prosperous society in all respects. The focus will now shift onto the second goal, the full realization of the Chinese dream of national rejuvenation.

The second goal is due to be delivered in 2049, for the celebration of the centenary of the founding of the People's Republic of China. It is one of the great strengths of China's system, and one of the greatest contrasts with other models of democracy.

President Xi offered his compliments to the whole of Chinese society for their efforts during 2021. Many hardships have been faced and much has been overcome. The president's compliments have been well-earned. China's response to the COVID-19 pandemic has been, and continues to be, exemplary. It has been recognized as such both in China and throughout the rest of the world.

One of the key elements of national rejuvenation is respect for the environment, and Xi documented many of the areas in which work has been done and will continue, making specific reference to China's great rivers, its afforestation efforts and its wildlife. He also paid tribute to some of the great technological achievements of the year, in particular the Zhurong rover on Mars, the Xihe satellite, and the Tianhe space station. I have no doubt that the three "taikonauts" in the space station were listening as attentively to his words as the rest of the country.

The international arena continues to be rife with turbulence. Xi reaffirmed China's determination to continue with the principle of One Country, Two Systems in Hong Kong and Macao, and its commitment to the ultimate reunification of the country.

2022 will see China host the Winter Olympics in Beijing – these games should be a celebration of camaraderie, harmony and friendly competition, not an opportunity for infantile grandstanding and political point-scoring. The president called for unity, solidarity and cooperation in the international community in confronting the common problems we face.

One of the greatest achievements of this or any other age has been China's ending of absolute poverty throughout the country by 2021. President Xi referred to his own direct experience of rural hardship – he was sent out to the countryside in Yan'an as an educated youth during the Cultural Revolution – and he spoke about the fact that he has visited individual villagers in their homes to ask about their difficulties, and emphasized that he does not forget what they tell him.

This passage was of particular significance to me personally. I listened to the speech in Tianshui City, Gansu Province, where I have been traveling in preparation for writing a book on China's rural revitalization strategy.

Over the past few days, I have visited both Yuangudui Village in northwest China's Gansu Province and Bulenggou Village in Linxia Hui Autonomous Prefecture. In Yuangudui, I visited the former home of Ma Gang, who passed away last year, with whom Xi sat and conversed during his trip in 2013. 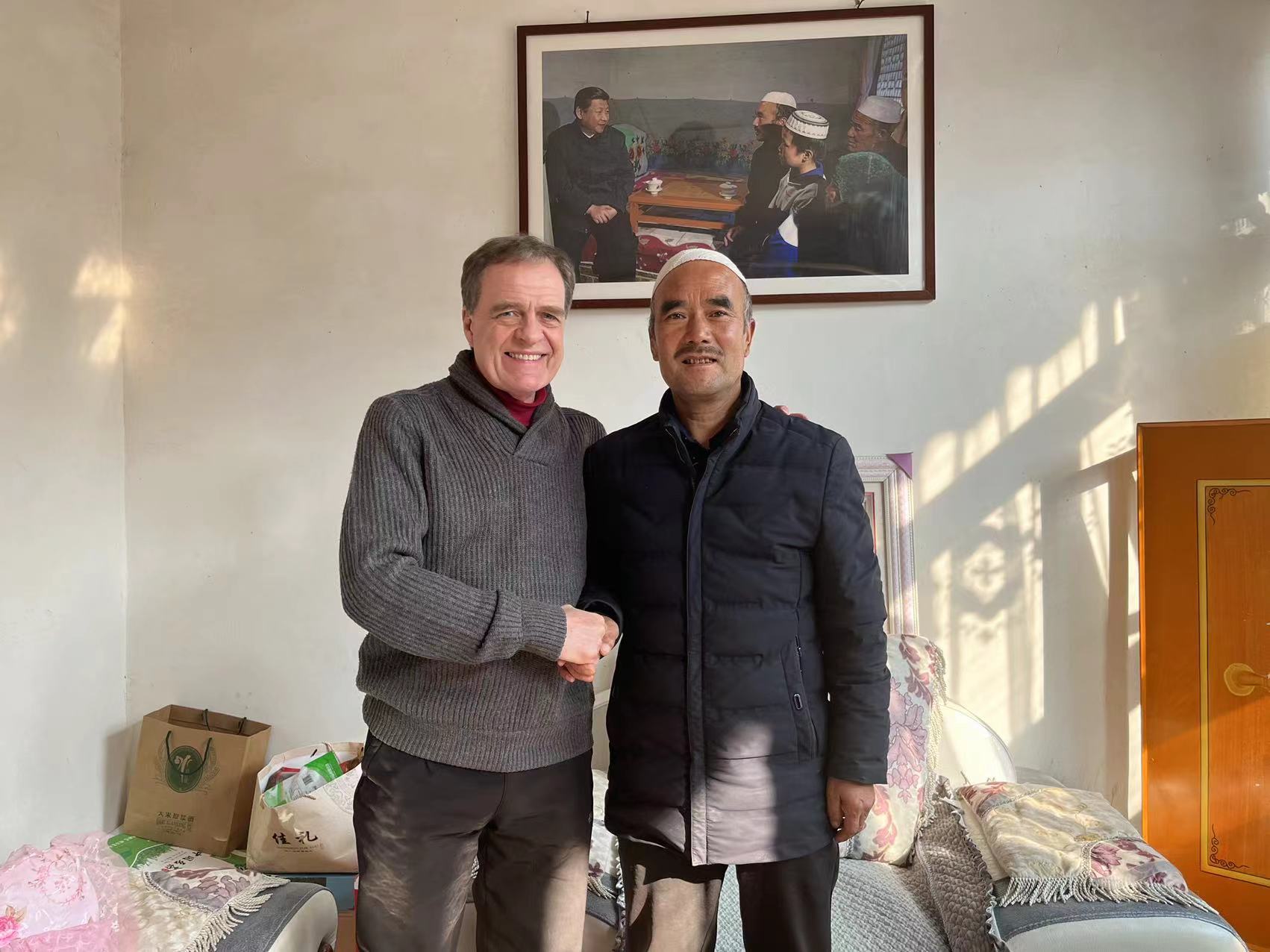 In Bulenggou, during the same trip, he visited and spoke with Ma Maizhi. Ma himself invited me into his newly-built home, shook me by the hand, and below the photo of himself and the president that was taken in 2013, he told me with great sincerity and warmth about the progress that has been made in the years since Xi's visit – improvements in the villagers' living conditions, their lives, and above all their attitude and self-belief.

I was privileged to see the transformation that has been wrought by the targeted poverty alleviation strategy he has led. I am sure that he would take great pride and satisfaction in the results. I also learned at village level a great deal about future plans for further development. It is very encouraging to know that at every level of government, up to the president himself, there is a profound awareness that poverty alleviation is not an end in itself, but one step on the much greater journey of rural revitalization – "To ensure that everyone leads a better life, we must never rest on what we have achieved, and there is still a long way to go…"

In the splendid new primary school in Bulenggou, the children of the fourth grade welcomed me in English and volunteered to play a song for me on their gourd flutes. I was very touched when the first notes of their music filled the air. The song is widely sung in China, where it is known as You Yi Di Jiu Tian Chang (Friendship Lasts Forever).

What the children could not have known was that they were welcoming me to their village school with a song from my own home country of Scotland. The original song is called Auld Lang Syne; it was written in Scotland by Scotland's greatest poet, Robert Burns. It is the song that is sung last night by billions of people throughout the world to welcome in the New Year.

In its own small way, this tiny event symbolized one of China's, and Xi's, greatest aspirations – one to which he always makes reference, and one which featured specifically in his speech for 2022: A global community of shared future.