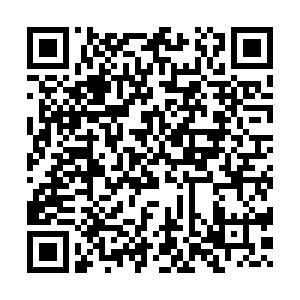 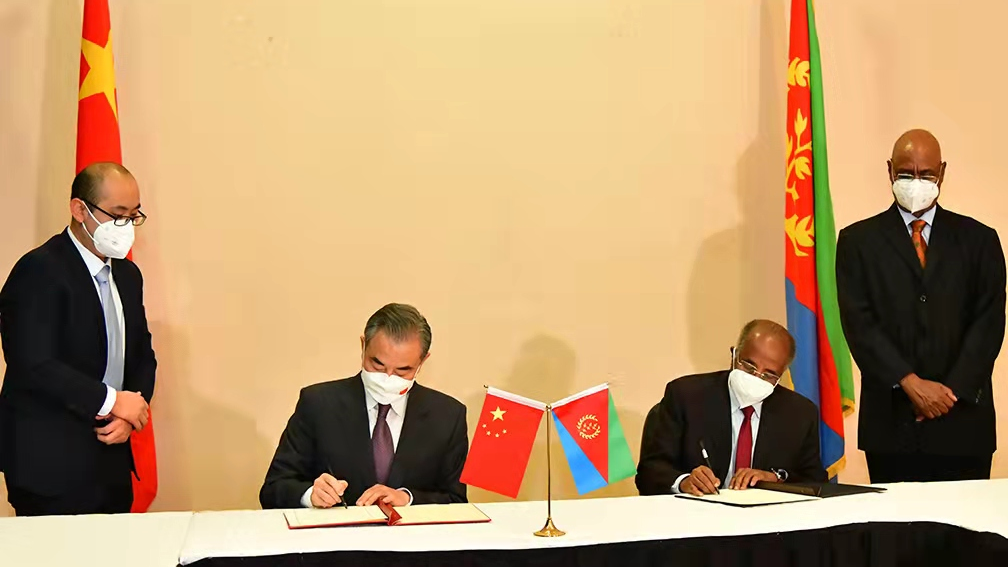 Editor's note: Fikrejesus Amahazion is an educator and research analyst at the Eritrean Center for Strategic Studies in Asmara. His areas of interest include human rights, political economy and international development, with a particular focus on Africa. The article reflects the author's opinions and not necessarily those of CGTN.

In early January 1991, Qian Qichen, at that time the foreign minister of China, paid an official visit to Ethiopia, Uganda, Kenya, and Tanzania. Every year since then, Africa has been the first overseas destination of a Chinese foreign minister in a new year. Upholding that tradition, Wang Yi, state councilor and current foreign minister of China, is presently on a three-nation trip to East Africa. His January 4-7 trip to Eritrea, Kenya, and the Comoros comes just over a month after the conclusion of the Eighth Ministerial Conference of the Forum on China-Africa Cooperation (FOCAC) in Dakar, Senegal.

Zhao Lijian, a spokesperson for China's foreign ministry, announced that the foreign minister aims to promote the implementation of the outcomes of the FOCAC Ministerial Conference, dovetail new measures for practical cooperation between China and Africa, and support African countries in defeating COVID-19 and promoting economic recovery.

Wang's first overseas visit of the year – coming so soon after the FOCAC summit last November – underscores the great importance that China attaches to its partnerships with African countries and also helps to highlight the strong ties that have developed between Beijing and the continent over the years. Although Sino-Africa relations have a long history that can be traced back centuries, in recent decades China and many African countries have noticeably grown much closer. Sino-African cooperation extends to a variety of issues and a wide range of fields, while economically, China has emerged as Africa's most important partner. It is the continent's largest bilateral trading partner, the biggest bilateral lender, and among the leading sources of assistance and foreign direct investment.

On the first leg of his trip, Wang arrived in Asmara, the Eritrean capital on the evening of January 4, where he was warmly received at the airport by Osman Saleh, Eritrea's foreign minister, and a delegation of senior officials. During his two-day visit, Wang met his counterpart and President Isaias Afwerki.

In talks covering a range of domestic, regional, and global issues of mutual concern, Afwerki applauded China's progress and contributions to a global order based on respect for international law, while the Chinese foreign minister expressed gratitude for Eritrea's adherence to the one-China principle and China's rejection of unilateral sanctions. Notably, it was announced that China would extend 100 million yuan ($15.7 million) in support of Eritrea and that there would be more cooperation on human capacity building, infrastructure, mining, and developments at the ports in Assab and Massawa on the Red Sea. Prior to Wang's departure from Eritrea, he also signed a joint statement alongside the Eritrean foreign minister. 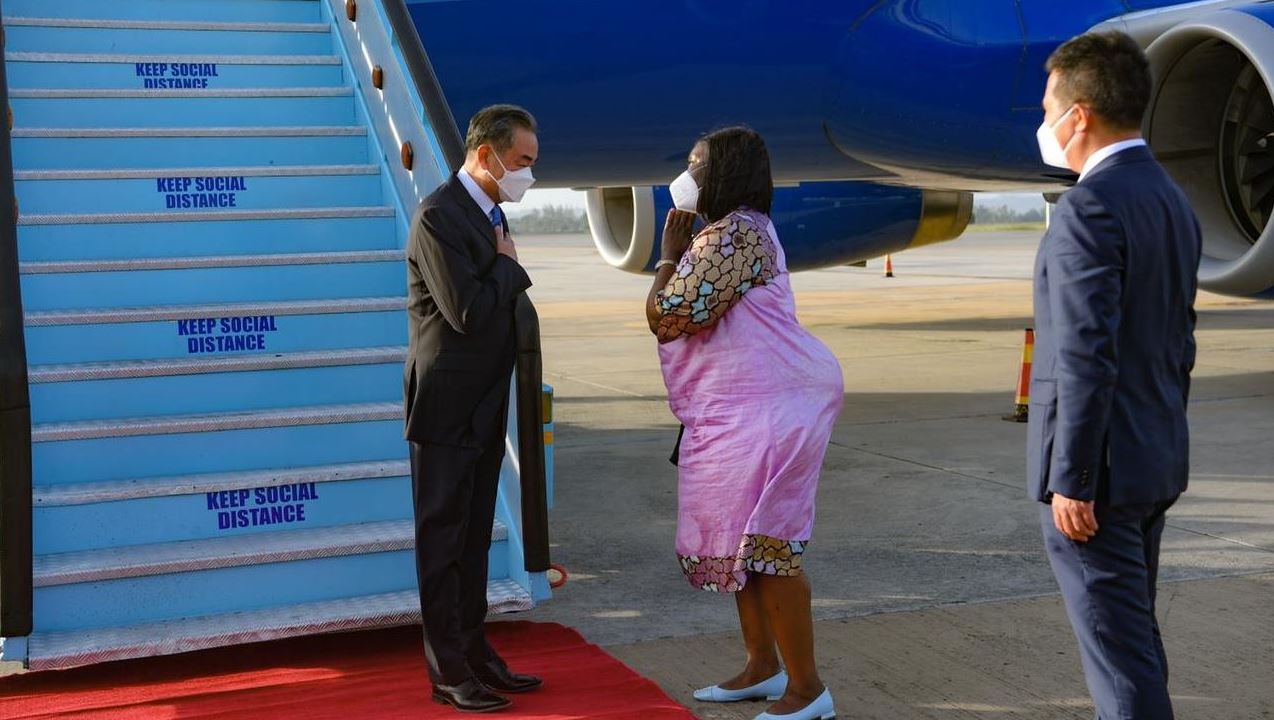 These developments reflect the strengthening of the China-Eritrea bilateral relationship. In late November 2021, Eritrea became the latest African country to ink a memorandum of understanding to join the Belt and Road Initiative (BRI), a transcontinental infrastructure and development project announced by Chinese President Xi Jinping in 2013.

For China, Eritrea represents a reliable partner, boasts tremendous untapped potential and important ports, and offers excellent positioning near critical transit routes for global trade. The Bab el-Mandeb Strait forms a vital link in the maritime route between the Mediterranean Sea and the Indian Ocean via the Red Sea and the Suez Canal. Due to its strategic location, Eritrea also offers considerable potential as a regional hub for markets in neighboring Ethiopia, South Sudan and Sudan – countries where China has invested heavily and maintains significant economic interests. Notably, the recent MoU with Eritrea and possible further investments moving forward also provide Beijing with an opportunity to signal its continued willingness to back some infrastructure development in Africa at a time when questions have been raised about a possible reduction in aid to the continent.

Meanwhile, for Eritrea, active participation in the BRI can help to boost socio-economic growth and encourage general development, particularly through stimulating greater levels of trade and investment. BRI participation will also play a role in improving the country's industrialization and increasing its connectivity to the rest of the world. Previously, Eritrea's Foreign Minister Osman has also encouraged China's cooperation on investments that enhance local value-addition and secondary or tertiary levels of manufacturing.

From Eritrea, Wang headed to Kenya, where he was due to hold talks with Kenyan President Uhuru Kenyatta and Raychelle Omamo, the cabinet secretary for foreign affairs.

Kenya, the largest economy in East Africa and a historic hub of Indian Ocean trade, is a longstanding key partner for China. It has been a BRI nation since 2014 and China has supported the development of a number of significant infrastructure projects in the country, including the Mombasa-Nairobi Standard Gauge Railway, the Lamu port, the Lake Turkana power project, and the Nairobi Expressway. There has also been a steady rise in the number of Chinese companies investing in Kenya over the years, and in 2021, a total of 107 companies were operating in the country.

Within this context, the Chinese foreign minister's trip to Kenya is expected to further cement relations between the two countries, as well as to offer fresh impetus and renewed support in the face of some challenges that have arisen related to projects in the country. Notably, during a recent inspection tour of the Nairobi Expressway, President Kenyatta expressed his appreciation toward China, explaining, "Our partnership with China is one that is mutually beneficial, that is based on win-win and we are very grateful to the Chinese government and the Chinese people for the support they continue to render not only to our country but to the rest of Africa."

To round off his trip to Africa, Wang will head to the Comoros, a small archipelago in the Indian Ocean. China was the first country to recognize and establish formal diplomatic ties with the island nation after the former French colony declared its independence in 1975. Since then, they have maintained a positive bilateral relationship. Accordingly, Wang's visit, which is the first in some time by a Chinese foreign minister to the Comoros, will provide a useful opportunity for the two countries to engage on issues of mutual concern, further strengthen their longstanding ties, and establish more areas for effective cooperation.