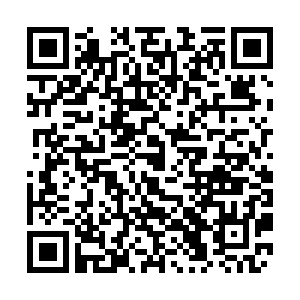 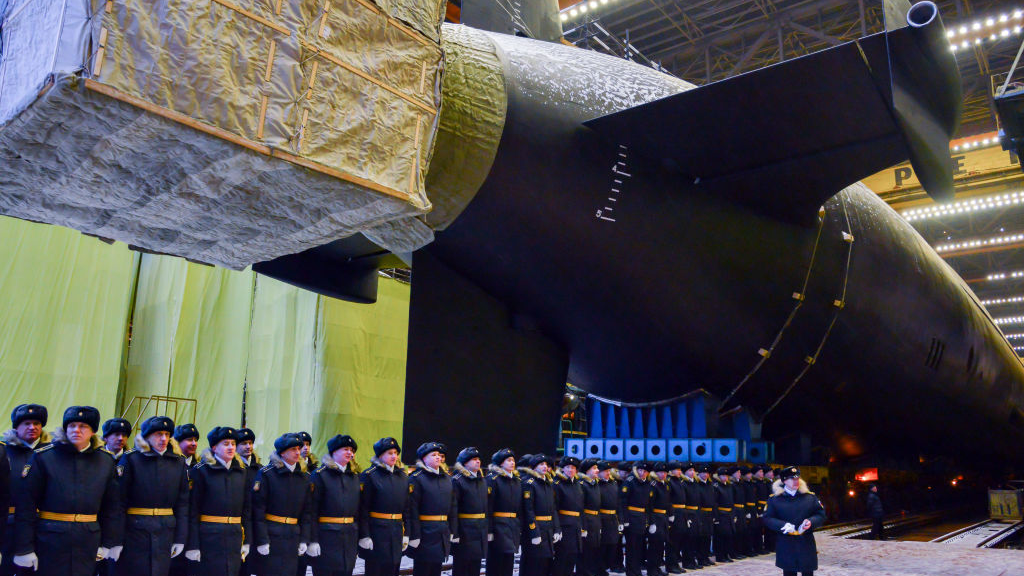 Servicemen line up for a roll-out ceremony for Generalissimus Suvorov, the second Project 955A Borei-A nuclear-powered ballistic missile submarine, at the Sevmash shipyard, a subsidiary of United Shipbuilding Corporation, in Severodvinsk, Russia, December 25, 2021. /Getty

Servicemen line up for a roll-out ceremony for Generalissimus Suvorov, the second Project 955A Borei-A nuclear-powered ballistic missile submarine, at the Sevmash shipyard, a subsidiary of United Shipbuilding Corporation, in Severodvinsk, Russia, December 25, 2021. /Getty

Editor's note: Wang Peng is researcher and director's secretary at the Center for Chinese Foreign Strategy Studies, Renmin University of China (RUC). The article reflects the author's opinions and not necessarily the views of CGTN.

The international community speaks highly of this statement. UN Secretary-General Antonio Guterres welcomed the statement by saying that it was in line with his longstanding call for dialogue and cooperation to this end, and he looks forward to further details of future initiatives. AFP asserts that it is very rare for the five states to make such a joint statement.

It is common sense in international relations that any agreement or joint statement is essentially a compromise between parties, which try to balance their interests. While defending their own core interests, they have to make concessions to other players. When it comes to this joint nuclear declaration, the main players and actors are the U.S., Russia and China.

If we regard the nuclear declaration as a product of the trilateral game between China, the U.S. and Russia, and comprehensively consider each party's strategic position and appeal, we may interpret the statement as follows:

First, China and Russia may use the statement to counter and correct the conduct of the U.S. in recent years, such as its attempt to expand its nuclear arsenal, its pursuit of resuming nuclear tests, and especially, its establishment of AUKUS that undermines efforts for global nuclear non-proliferation norms in a disguised way.

Certainly, it remains to be seen how strong will be the statement's binding effect on actual nuclear behavior of the parties in the future, given that normally joint statements have no legal effect, as well as the prevailing "dual standard" in international affairs. Still, at least in terms of shaping international opinion, China and Russia have scored points.

Second, the U.S. and Russia can manage the uncertainty caused by the Russia-Ukraine military confrontation through major power coordination.

At present, the situation in eastern Ukraine has taken a turn for the worse and is on the brink of war. Although the U.S. hopes to drive a wedge between Russia and Europe and destroy the Russian-German Nord Stream 2 natural gas pipeline project by stirring up the situation in eastern Ukraine, it does not want the situation to deteriorate and escalate without limit, thus leading to major and uncontrollable changes or even reversals in the U.S. defense line in Eastern Europe. Such a situation would force the U.S. to get deeply involved in eastern Europe, thus undermining its overall transformation of geopolitical strategy, which urges Washington to deploy a strategic withdrawal from other theaters in Eurasian continent and lay focus on the Indo-Pacific region to contain China. 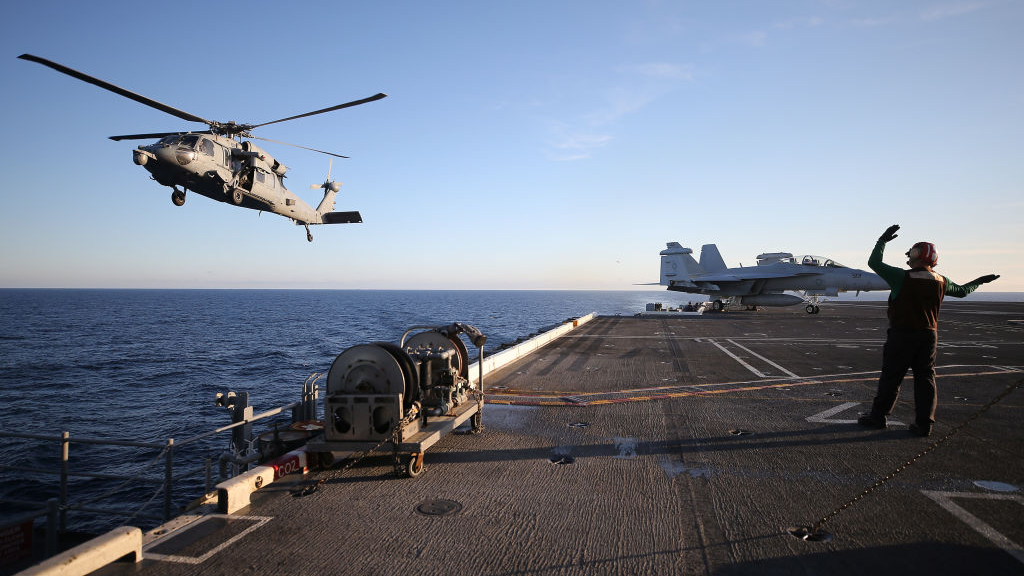 A U.S. Navy helicopter descends to land on the nuclear-powered USS Nimitz aircraft carrier while at sea off the coast of Baja California, Mexico, January 18, 2020. /Getty

A U.S. Navy helicopter descends to land on the nuclear-powered USS Nimitz aircraft carrier while at sea off the coast of Baja California, Mexico, January 18, 2020. /Getty

Third, the U.S. may aim to limit the development of China's nuclear force by this statement literally.

Moscow is no longer the point in the eyes of Washington strategists. Restricted by its own economic structure, as well as the impact of international sanctions since 2014, global oil prices and other external factors, Russia's economic strength, overall national strength and future potential are predictable. Therefore, although the U.S. is wary of Russia on the regional security in eastern Europe, especially Ukraine now, it does not worry that Russia will vigorously develop nuclear arsenal and thus break the existing nuclear balance of power and strategic stability between Russia and the United States.

On the contrary, the U.S. has been particularly concerned about the growth of China's overall national strength, military strength and especially its nuclear strength in recent years, believing that China's growing economic and scientific strength will enable Beijing to steadily upgrade its nuclear arsenal and deterrence capability. As a result, the U.S. strongly advocates that China must be included in the U.S.-Russia nuclear disarmament framework to curb China's development in nuclear weapons.

At the same time, the U.S. concludes that there is an increasing possibility that China may achieve complete reunification by non-peaceful means, because growing material strength offers China new options and resource to retake Taiwan region by force. Consequently, a structure of mutual nuclear deterrence between China and the U.S. has emerged: China is in urgent need of enhancing nuclear arsenals to deter the U.S. from intervening in the situation across the Taiwan Straits by military means and hinder China's reunification; while from the perspective of the U.S., Washington also must ensure its nuclear arsenal is strong and effective enough to deter the Chinese central government from retaking Taiwan by force. This strategic structure of mutual nuclear deterrence may explain why the U.S. has been extremely concerned about China's development of nuclear technology, nuclear arsenal, and missiles in recent years.

Fourth, China has no intention of entering a nuclear arms race with the United States. The nuclear doctrine of "minimum deterrence" practiced by China is clear and long-term, which guides Beijing to maintain a strictly limited nuclear arsenal to meet the minimum requirements of deterring foreign invasion.

By contrast, the U.S. nuclear strategy towards China has inherent contradictions. On the one hand, the U.S. does not want China's nuclear strength to increase, thus posing a challenge to its own nuclear superiority and hegemony. On the other hand, however, some hawkish politicians and think tanks are advocating a new cold war against China, trying to lead China into the old trap of the Soviet Union – cost-imposing and overstretch. The ambitious leaders of Kremlin gradually suffered an unaffordable arms race, weakened by the attrition warfare, and finally moved towards the decline and fall. But China is not the Soviet Union; Beijing has drawn lessons from the latter.

Finally, China's smart asymmetric competition approach may improve its nuclear capabilities at controllable costs and risks, which is also in line with the spirit of this joint nuclear declaration.

The so-called asymmetric competition model is simply the principle advocated by Mao Zedong's practical military maxim – "you fight in your way while I fight in my style."

In the field of nuclear arms control and competition, the asymmetric way means China would never repeat the Soviet Union's failure, which took a symmetric way to counter the U.S. threat and expanded the nuclear arsenal immoderately beyond its fiscal capacity.

By contrast, China focuses on the quality of nuclear arsenal and effective deterrence by improving the nuclear equivalent of warheads, as well as the viability, motility and penetration capabilities of the missiles, rather than simply increasing the number of nuclear warheads. The advantages of such a nuclear-armed military path are obvious: China avoids the military expenditure and financial burden due to the maintenance of a huge nuclear arsenal, and pacifies its neighbors.