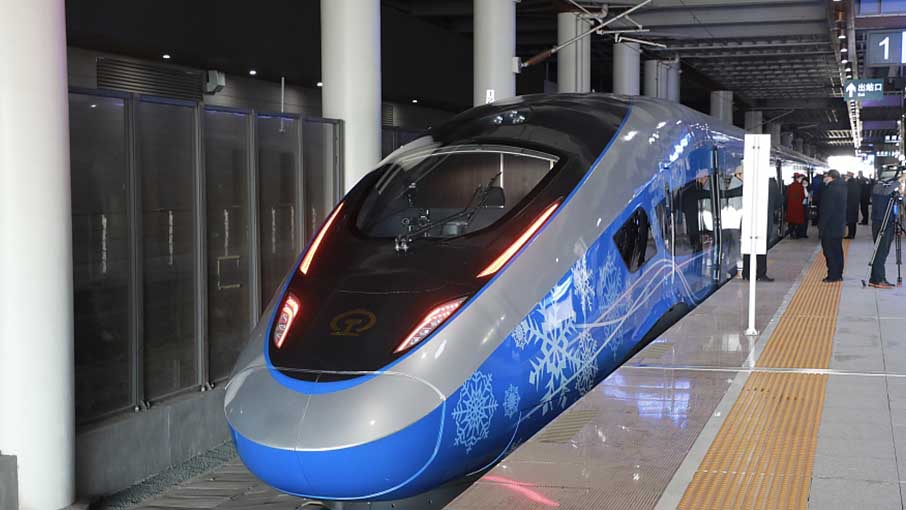 The world's first express train that incorporates a studio powered by 5G technology has been launched. The train, jointly developed by the China Media Group (CMG) and China Railway was put into operation on Thursday.

CMG set up a studio on a carriage of a Fuxing bullet train, which runs at a speed of about 350 kilometers per hour, is designed to provide convenient passage for athletes, journalists and other staff in the upcoming Winter Games.

The upgraded express railway is based on the Beijing-Zhangjiakou high-speed railway, interlinking three competition zones of the Games, including Beijing, Yanqing and Zhangjiakou.

The train is set to finish a one-way journey of over 170 kilometers in 56 minutes. Besides, over 400 5G base stations along the express railway have been installed to ensure stable signal transmission from the trains.

"The train has seen new improvements and breakthroughs in a number of areas. It has also managed to reach an automated driving speed of 350 km/h, a world's first. It will not only provide fast and reliable transport for those attending the winter Olympic Games, but this cooperation with CMG will also set a good example on how we can deepen the integration of media and public transportation in the future." said Lu Dongfu, Chairman of China Railway.

During the Games, there will be 40 pairs of these trains on the express railway and dedicated trains will be arranged for the opening ceremony, according to China Railway.

During the unveiling ceremony on Thursday, Shen Haixiong, president of CMG, said that it's the duty and mission of CMG to tell Beijing Winter Olympic stories well and open a new chapter in the promotion of the Olympic Movement, culture and Chinese sportsmanship as an international mainstream media outlet, a Chinese national media group and the host broadcaster.

What are the difficulties in the making of 5G Express?

The striking feature of the 5G Express is the 5G ultra HD studio embedded on the train, which adopts full IP technology and is equipped with three fixed cameras, two landscape cameras on both ends of the train and a mobile camera.

The make-shift studio mainly serves to provide live interviews. In addition, it is capable of providing virtual production and multi-party connection services for TV programs and mobile apps.

Program streams on the train can be transmitted to all news studios and digital platforms in real time through the 5G network.

According to China Railway, the studio has solved three major technical problems, including the significant decline in data transmission caused by Doppler frequency offset effect under high-speed movement, the 5G signal loss in the carriage and tunnels, and the rapid switching among more than 400 5G base stations along the express railway.

Shen spotlighted the difficulty in maintaining reliable and resilient 5G signals in a fast-moving carriage and acknowledged the hard work done by related agencies including China Railway, China Railway Beijing Group, China Unicom, China Mobile and CMG, who pooled resources to bring the project to fruition despite the challenging network conditions.