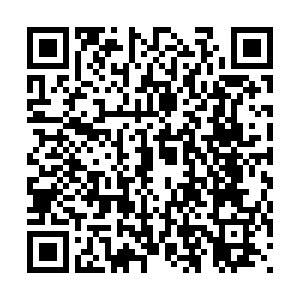 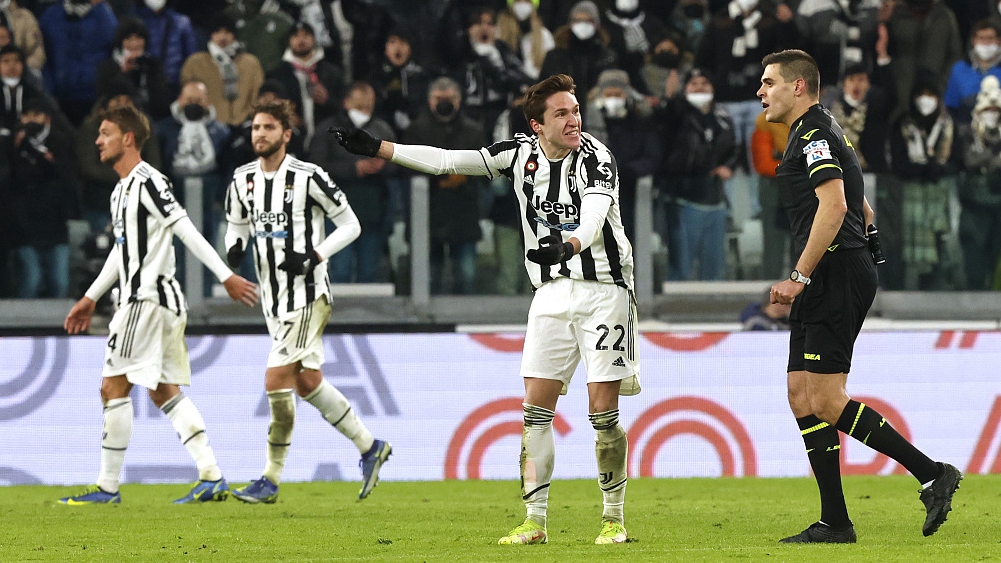 Federico Chiesa of Juventus appeals to referee Simone Sozza (R) during their Serie A clash with Napoli at Allianz Stadium in Turin, Italy, January 6, 2022. /CFP

Federico Chiesa of Juventus appeals to referee Simone Sozza (R) during their Serie A clash with Napoli at Allianz Stadium in Turin, Italy, January 6, 2022. /CFP

Napoli on Thursday were held to a 1-1 draw by Juventus which left them lagging behind in the Serie A title race, on a day in which the dominant topic was the coronavirus cloud hanging over the league.

Dries Mertens opened the scoring in the 23rd minute for Napoli, who performed well in an open game at the Allianz Stadium in Turin but were pegged back eight minutes after half-time when Federico Chiesa's deflected shot squirmed past David Ospina.

Both players had chances to win the match well saved by Ospina and Juve stopper Wojciech Szczesny but an intense contest eventually petered out into a draw.

Napoli lag six points behind leaders and reigning champions Inter Milan, whose early match at Bologna was the first of four not to take place after their hosts were banned from playing by local health authorities to keep a COVID-19 cluster at the club under control.

Juve meanwhile missed the chance to put pressure on fourth-placed Atalanta in the Champions League race, as they sit three points back in fifth having played a game more after the Bergamo outfit's match with Torino was also shelved. 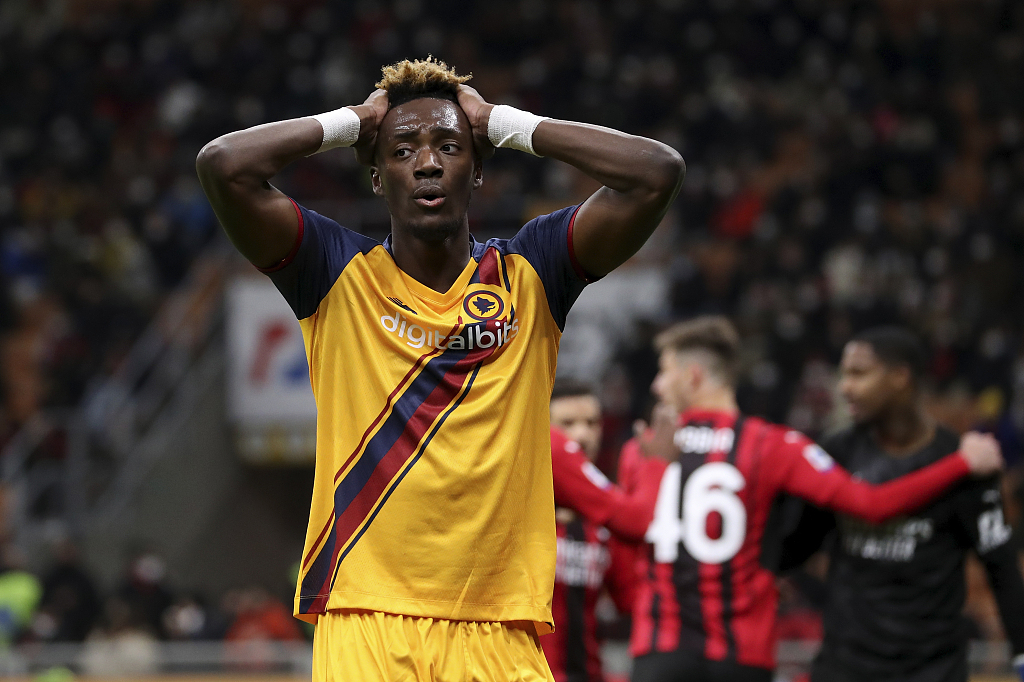 Tammy Abraham of Roma reacts to a missed chance during their Serie A clash with AC Milan at Stadio Giuseppe Meazza in Milan, Italy, January 6, 2022. /CFP

Tammy Abraham of Roma reacts to a missed chance during their Serie A clash with AC Milan at Stadio Giuseppe Meazza in Milan, Italy, January 6, 2022. /CFP

The draw was a great result for AC Milan, who are just one point behind local rivals Inter after two early goals from Olivier Giroud and Junior Messias and a late strike from Rafael Leao earned Stefano Pioli's side an entertaining 3-1 win over Roma at the San Siro.

Milan were missing their two starting center-backs Simon Kjaer and Fikayo Tomori, as well as a host of other players to COVID-19 infections or the Cup of Nations, but could have scored more after also striking the woodwork twice.

Leao struck the crucial third eight minutes from the end after Roma, who had pulled a goal back through Tammy Abraham and were down to 10 men following the 75th-minute sending off of Rick Karsdorp, had gone close with Abraham and Henrikh Mkhitaryan.

"I knew we were going to play well today... This win is a great sign for how we need to play in the second half of the season," Pioli told DAZN.

Roma finished the match with nine men when Gianluca Mancini picked up a second yellow card and gave away a stoppage-time penalty for a foul on Leao, but Zlatan Ibrahimovic's spot-kick was well-saved by Rui Patricio.

Jose Mourinho's team are six points from the Champions League places alongside Lazio, who could only draw 3-3 with Empoli. The strange spectacle of teams turning up for fixtures they knew would not be played returned to Serie A after local health authorities (Azienda Sanitaria Locale, or ASL) barred Bologna, Torino, Salernitana and Udinese from playing their matches.

Earlier Serie A released a new protocol which insisted on teams playing matches as long as they had 13 players (including one goalkeeper) available who were born before December 31 2003, otherwise they would be handed a 3-0 defeat and be docked a point.

However figures from across the game have bemoaned the inconsistent decision making affecting teams who are left in the hands of the ASLs, bodies that answer to regional governments and act independently of one another.

"We're in the hands of 20 regions and what is considered a cluster in one isn't in another. If the decision comes from the ASL then it's hard to make a protocol (for the whole league)," said Lazio coach Maurizio Sarri.

Later on Thursday regional affairs minister Mariastella Gelmini said there would be a meeting between the government, regions and Serie A with the objective of "ensuring uniformity" in the league.