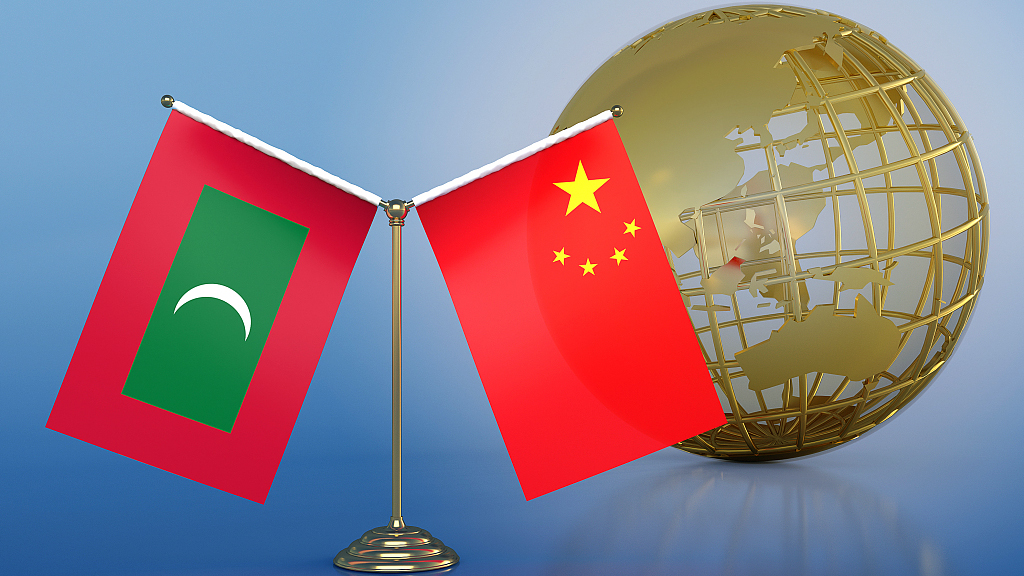 China and the Maldives have pledged to work together to push for the stronger development of their relations.

The president thanked China for its tremendous contribution to his country's socio-economic development, the firm support given to his country's vaccination campaign against COVID-19, and its reduction and suspension of the Maldives' debt within the framework of the G20.

The Maldives firmly upholds the one-China policy, and their sound bilateral ties and solid mutual trust are rooted in the long and traditional friendship and adherence to the principles of sovereign equality and mutual respect, the president stressed.

Expressing his confidence in the future development of bilateral ties, the Maldivian president said his country is ready to seize the opportunity of the 50th anniversary of the diplomatic relations between the two countries to deepen mutual understanding and mutually beneficial cooperation so as to push for the stronger development of bilateral ties.

For his part, Wang said this year marks the 50th anniversary of the establishment of diplomatic relations between China and the Maldives, which have withstood the test of international vicissitudes and become more mature, thus contributing to regional peace and stability. 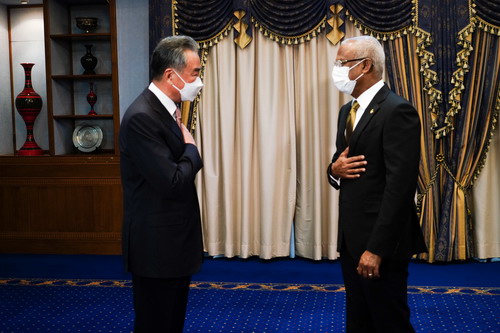 The most precious experiences from the five decades' exchanges between the two countries are the mutual respect, equal treatment as well as unity and mutual help which have consolidated the political foundation of the bilateral ties, Wang noted.

Appreciating the Maldives' firm support on China's core interests, Wang said China has always supported the Maldives in safeguarding its sovereignty and territorial integrity, seeking a development path suited to its own national conditions and pursuing an independent foreign policy, Wang said.

China is willing to expand cooperation with the Maldives in all fields and back its efforts to push for the strategy of diversified development, he said, hoping that a free trade deal between the two countries will be approved at an early date so as to facilitate the economic transformation and upgrading of the Maldives.

Wang also noted that the COVID-19 pandemic is the common enemy of mankind, and China will continue to uphold the vision of a global community of health for all and fight the virus side by side with the Maldives.

China is willing to continue providing the Maldives with anti-virus supplies including vaccines as needed, he said.

On the same day, Wang also met with his Maldivian counterpart Abdulla Shahid, with both sides pledging to jointly build the Belt and Road and focus on post-pandemic recovery.

Wang said that, when looking back at the past 50 years since China and the Maldives established diplomatic relations, one can see that the two countries have always been mutually respectful, treating each other equally and sincerely, and firmly supporting each other on issues of core interest.

The two sides will continue to build the Belt and Road with a high quality, actively push for key projects in basic infrastructure, houses and the around-the-island power grid, as well as sea water desalination so as to offer impetus to the Maldives' post-pandemic economic recovery, Wang said.

For his part, Shahid said the joint construction of the Belt and Road has borne fruitful results and has completely changed the Maldives' society. China has offered a large number of materials and vaccines to his country to fight against the COVID-19 pandemic, playing a key role in the 80-percent high vaccination rate in the Maldives. 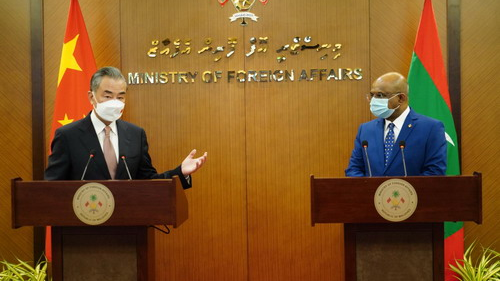 The Maldives is willing to deepen pragmatic cooperation with the Chinese side, the foreign minister stressed.

Wang said he is glad to see Shahid will attend the opening ceremony of the 2022 Beijing Olympic Winter Games in his capacity as president of the United Nations General Assembly, and the latter said he looks forward to attending the event and believes the games will be a great success.

Later, the two diplomats met the press together, where Wang said that his country supports the Maldives in advancing social and economic development.

The Chinese diplomat hailed the relationship between the two countries, calling it a model for country-to-country exchanges and win-win cooperation.

He listed the assistance China has provided the Maldives over years, including the expansion of the country's Velana International Airport, the construction of China-Maldives Friendship Bridge and the over 10,000 houses built to improve locals' living conditions.

China and the Maldives are now jointly constructing the Maritime Silk Road, and that coincides with the mutual interests of the two peoples, Wang said, adding that the two countries are jointly building a road of hope, prosperity and happiness.