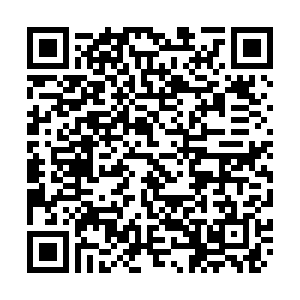 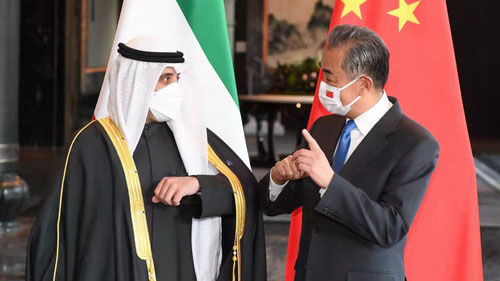 China and Kuwait on Wednesday agreed to strengthen the docking of the Belt and Road Initiative (BRI) with Kuwait's Vision 2035 and intensify efforts to make a five-year plan on bilateral cooperation.

The consensus was reached during talks between Wang Yi, Chinese state councilor and foreign minister, and Sheikh Dr. Ahmed Nasser Al-Mohammed Al-Ahmed Al-Sabah, Kuwait's foreign minister and minister of state for cabinet affairs, who is in China at Wang's invitation.

Proposed by China in 2013, the BRI comprises the Silk Road Economic Belt and the 21st Century Maritime Silk Road, and aims to build trade and infrastructure networks connecting Asia with Europe and Africa along and beyond the ancient Silk Road routes.

The two sides agreed to strengthen cooperation on agriculture and food security and expand cooperation in high-tech fields such as new energy, 5G telecommunications and smart cities.

They also agreed to continue to fight the COVID-19 pandemic together and deepen exchanges and cooperation in areas such as health, education, youth affairs, local affairs and sports. 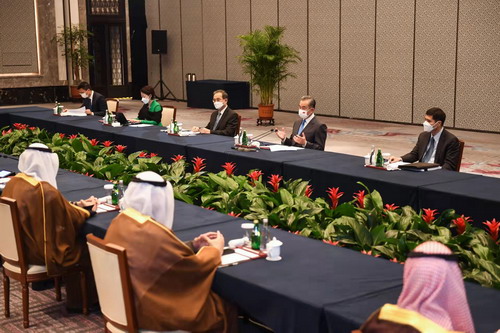 Wang described Kuwait as one of the friendliest countries to China, noting that Kuwait was the first Gulf Arab country to establish diplomatic relations with China and sign a deal with China on BRI cooperation. He expressed appreciation for Kuwait's friendly policy to China and its support for China's efforts in defending its sovereignty, security and development interests.

China will continue to regard Kuwait as a reliable partner and support the country's legitimate concerns, he added.

The Kuwaiti foreign minister said his country appreciates China's longstanding support and sincere help, and stressed that Kuwait cherishes its friendship and cooperation with China.

Kuwait supports China's just position on safeguarding its interests, and opposes the politicization of human rights issues and interference in China's internal affairs, he added.