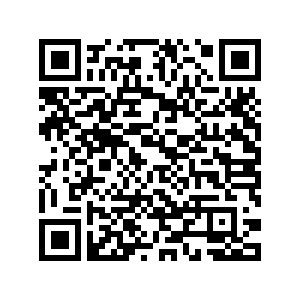 U.S. President Joe Biden will hit his one-year mark in the White House on January 20. Are people satisfied with his job performance? Do Americans believe the country is on the right track? Have Biden's promises been kept over the past year?

Despite a promising start, Biden's approval rating is the second-lowest after Donald Trump's for any U.S. president one year in. Aggregated polling data from RealClearPolitics suggests that 53 percent of Americans approved of him when he took office, but the number has slipped to about 40 percent a year later. 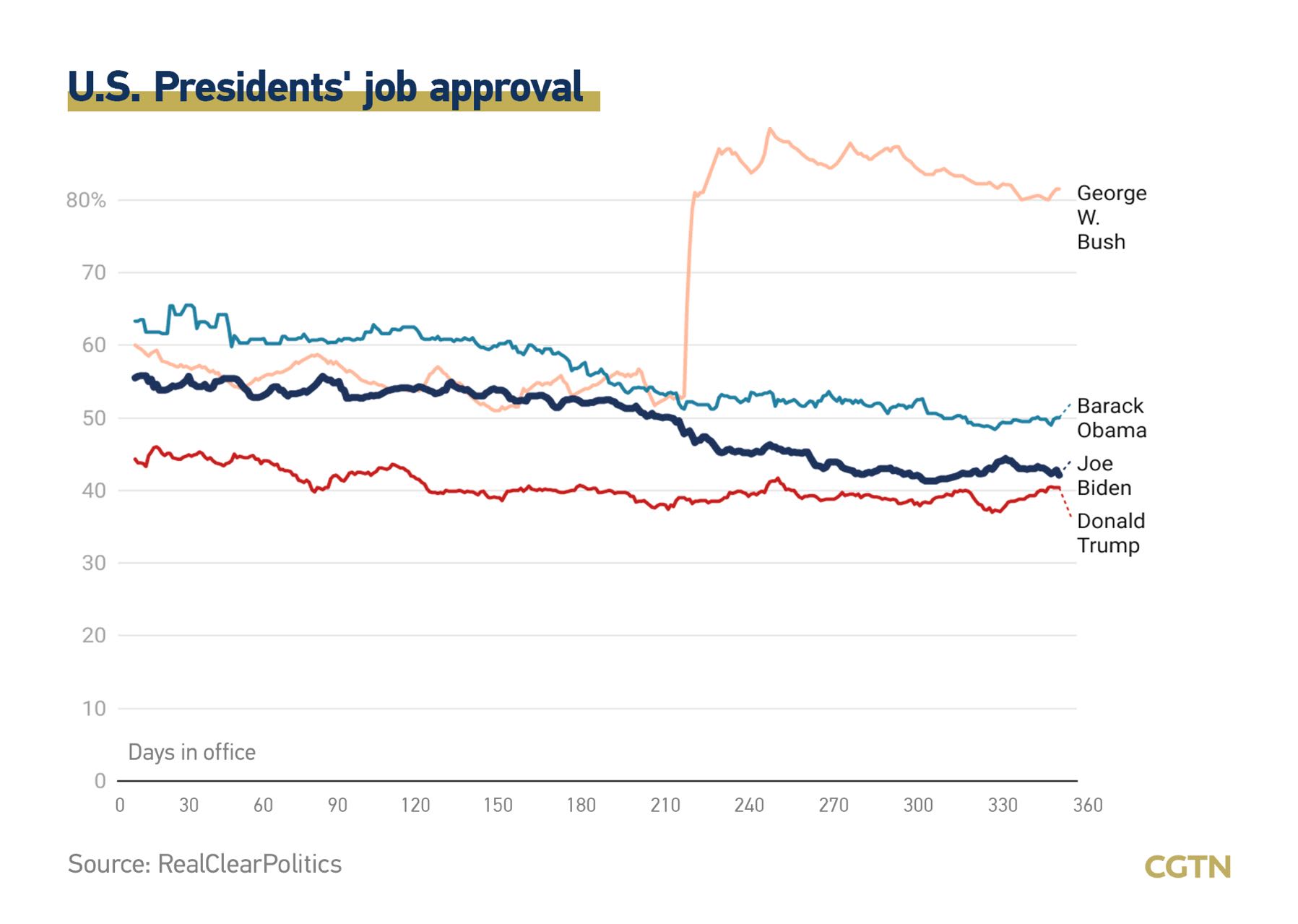 The dismal number comes amid spiking coronavirus infections. According to data from Johns Hopkins University, the total number of COVID-19 cases in the U.S. topped 60 million last week, making the country the worst-hit nation with the most cases and deaths.

Failing to revive the domestic economy is another major factor that has sapped public support for Biden. U.S. inflation last year hit its fastest pace in nearly four decades, as prices rose for an array of goods especially housing, automobiles and food.

"Concerns about inflation have taken center stage in discussions around America's kitchen tables. And, as one would expect, many are placing the blame squarely on Washington," said Patrick Murray, director of the Monmouth University Polling Institute, in December.

Meanwhile, Americans' attitudes towards the country's direction seem to be going hand in hand with the president's job approval rating. Polls indicated that over 40 percent of Americans believed the country was headed in the right direction after the Democratic presidential candidate took office. Yet, that has suffered a continued downturn since then. 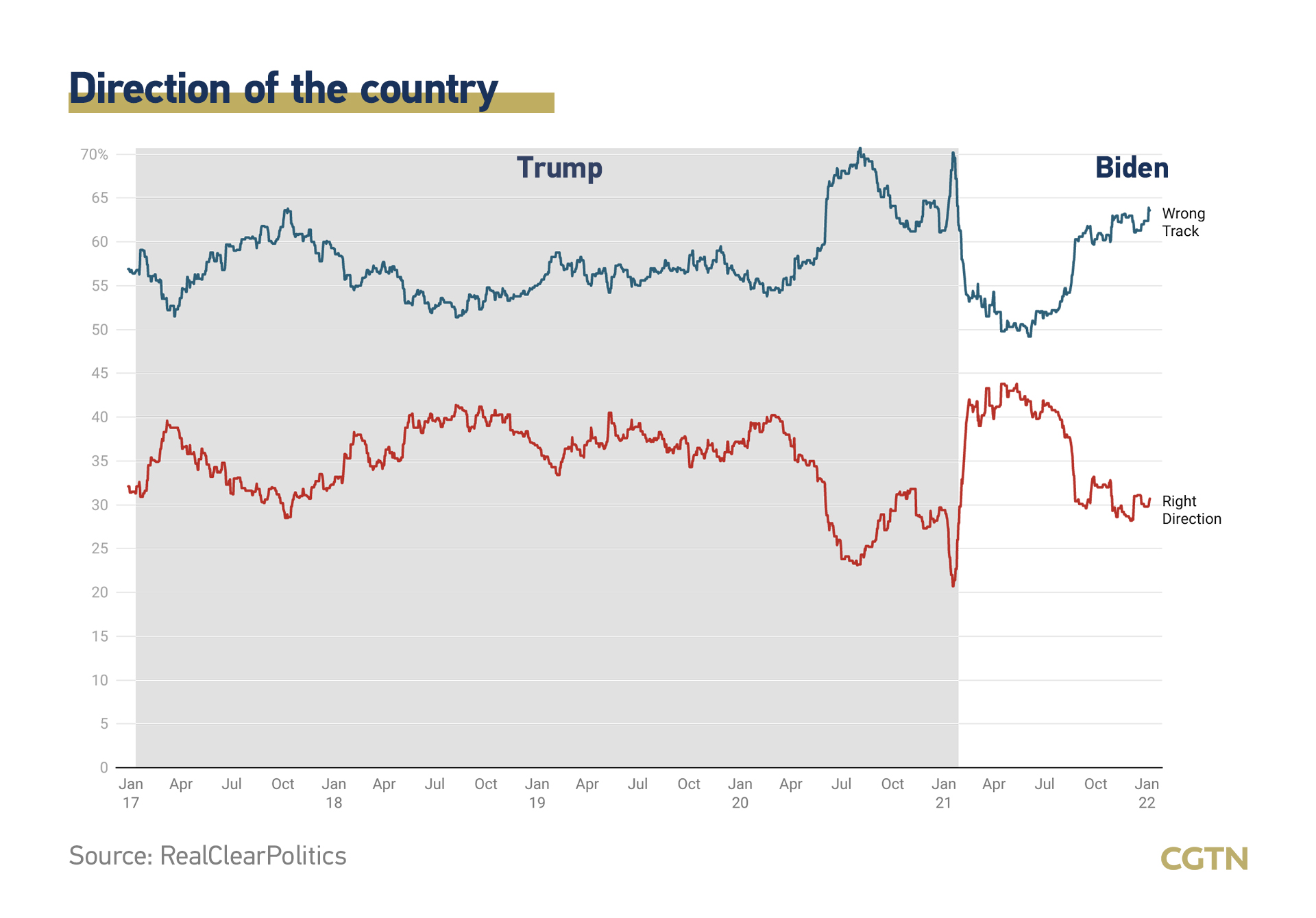 "The promise of the Biden presidency – knowledge, competence and stability in tough times – have all been called into question," he ​added.​

Looking back to campaign promises, Biden made 99 pledges and had worked on 88 of them by the end of last week. Among those, 16 have been achieved, 45 are in progress, 24 are stalled and three are compromised, according to PolitiFact. 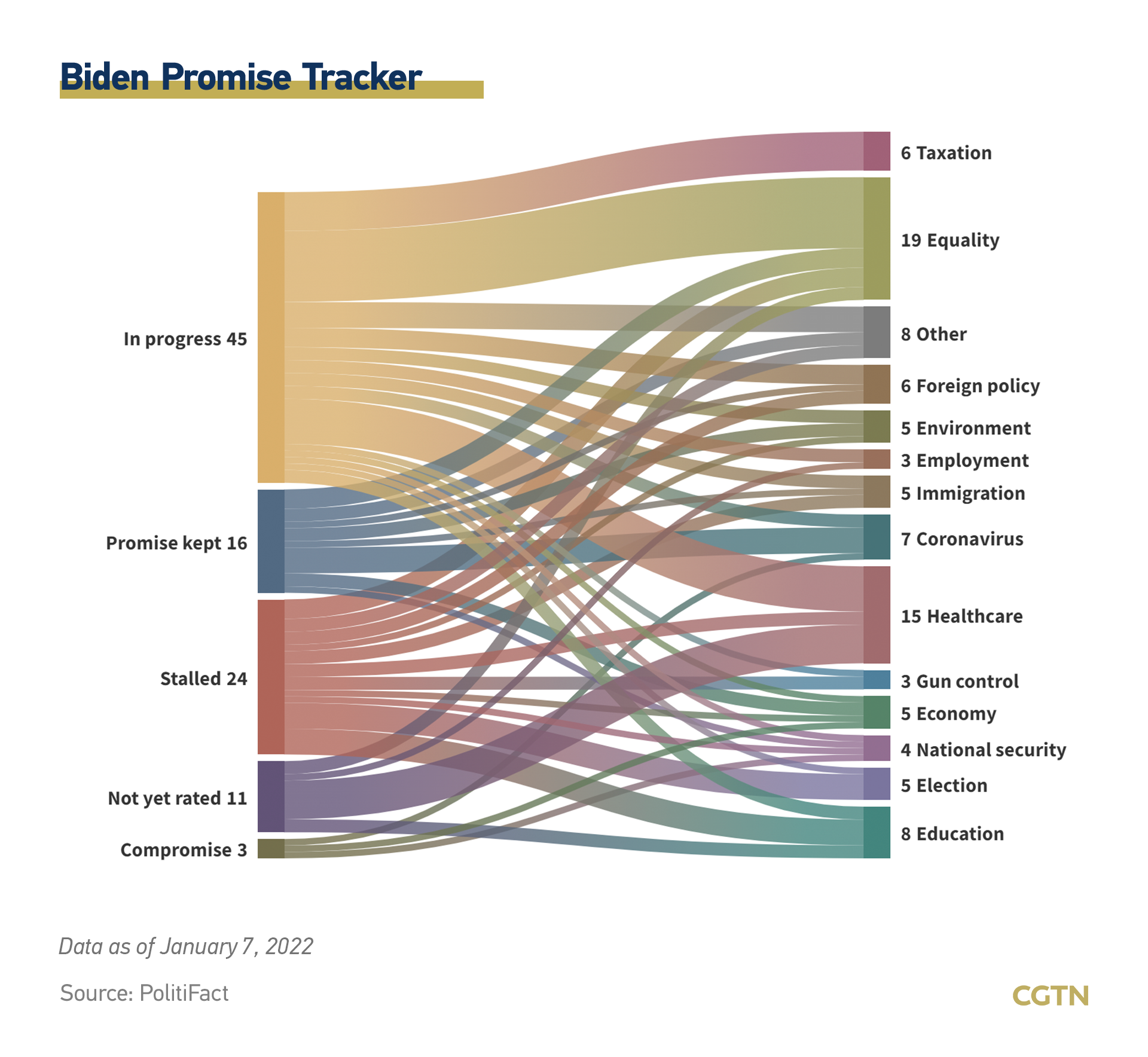 Although he has failed to get the pandemic under control, Biden has acted on all of his promises related to coronavirus. For example, he issued orders requiring masks to be worn in federal buildings and on airplanes and trains shortly after he took office.

He also reached the milestone of 100 million shots for 50 million people within his first 100 days. What's more, Biden honored his promises of increasing distribution and lowering costs for COVID-19 tests, including at-home tests.

Notably, the president signed the $1.9 trillion coronavirus stimulus bill into law last March, marking a huge step in fulfilling his promise to improve and build on Obamacare.

The plan was designed to provide additional money for COVID-19 vaccines and other medical equipment, offer direct payments and extended federal unemployment benefits to households, as well as financial aid to state and local governments.

One of his priorities, environmental issues, has also seen progress. The president signed an executive order rejoining the Paris climate accords in January 2021. This was his first major action to tackle global warming and a sharp reversal of his predecessor's environmental rollback.

The administration also submitted plans to the United Nations in April striving to put the country on a course to net-zero emissions by 2050.