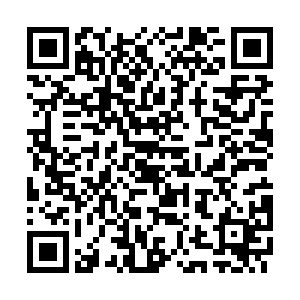 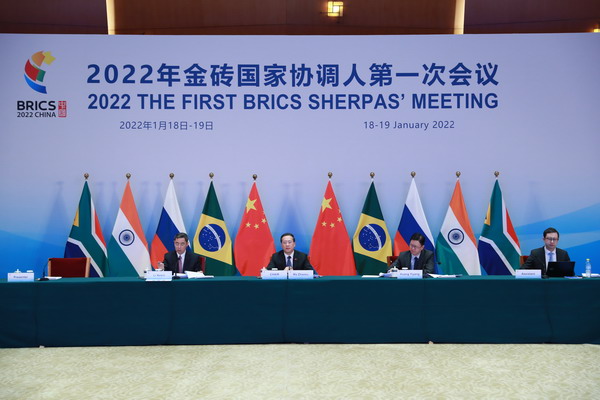 Representatives at 2022 the opening of the 2022 First BRICS Sherpas' Meeting held via video conference in Beijing, China, January 18-19, 2022. /Ministry of Foreign Affairs

Representatives at 2022 the opening of the 2022 First BRICS Sherpas' Meeting held via video conference in Beijing, China, January 18-19, 2022. /Ministry of Foreign Affairs

Ma made the remarks while hosting the 2022 the First BRICS Sherpas' Meeting held via video conference in Beijing, China.

"As the chair of the BRICS this year, China is willing to work with all sides to facilitate the building of a more comprehensive, closer, more practical and more inclusive BRICS partnership centering on the theme of 'forming a high-quality partnership to jointly create a new era of global development' for the purpose of stronger, greener and sounder global development," he told the meeting, which was attended by the BRICS Sherpas of Russia, India, Brazil and South Africa as well as representatives of relevant departments of China.

India was the chair last year when priorities were put on reforms of the multilateral system, counter-terrorism cooperation, sustainable development and people-to-people exchanges. 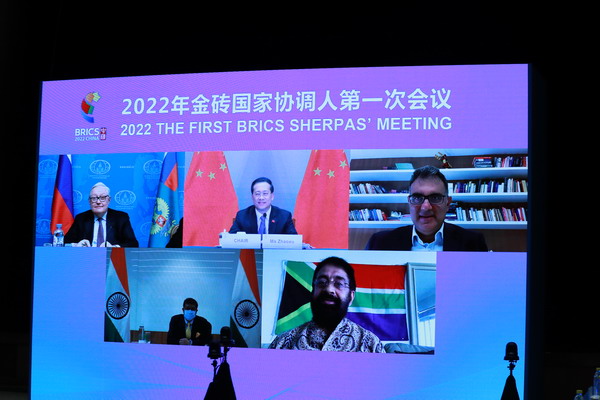 India's BRICS Sherpa Sanjay Bhattacharyya said that "last year, we saw a significant achievement that our foreign ministers brought about in terms of the document on the strengthening and reform of the multilateral systems."

"This issue of global governance, particularly the UN systems and other institutions, is extremely important. I'm happy that we shall continue to attach high importance to its continued relevance," he added.

As the pandemic persists, the group is proposing to keep cooperating on vaccine research and distribution, especially for developing countries.

Representatives of the countries unanimously applauded China's overall working idea and vision for the year, saying that China has identified the cooperation focal points that agree with the evolution of the international situation and the characteristics of BRICS cooperation.

On January 1, China officially took over the BRICS chairmanship, and will host a series of activities this year including the 14th BRICS Summit in June.

The Sherpas' meeting is the first official event held in China after it took over the BRICS chairmanship, and it also served to start the political preparations for the BRICS summit.