Download
Reach for the stars: How a science program for students in rural China skyrocketed
Wang Xiaonan , Zhao Yue 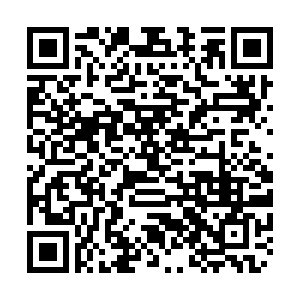 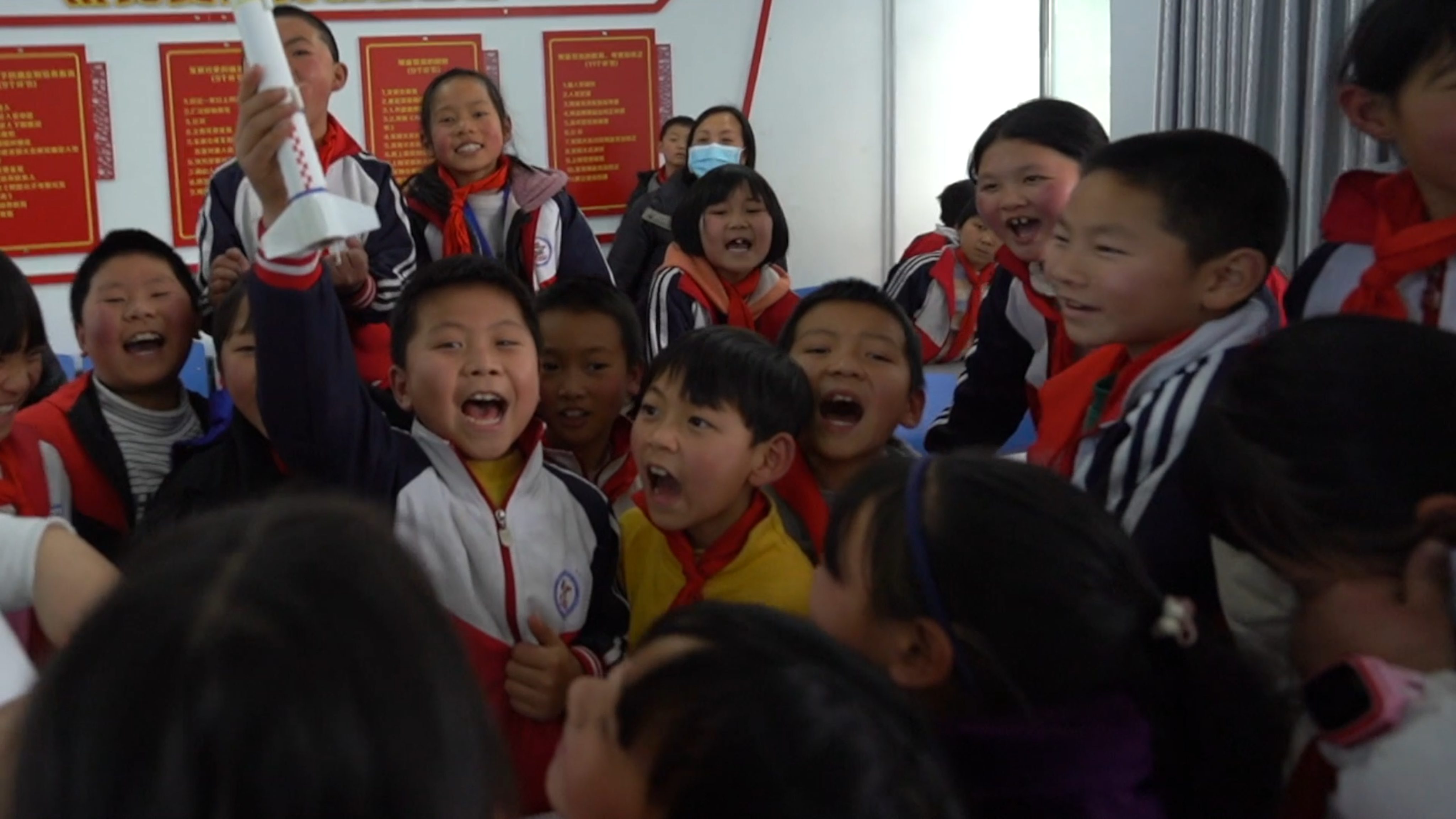 On an idle poultry farm nestled in southwest China's wild mountains, a small rocket blasted off, leaving behind a white trail across the clear sky. The loud bang from the thrust echoed in the bleak coteau amid shouts and cheers. It wasn't an official rocket launch by an aeronautic organization or research institute, but an edutainment experiment by two coders from the east coast and 200 children at a rural elementary school.

On that frosty winter afternoon, the children, mostly fourth and fifth graders from Xingzhong Town Lead Mine School, were ecstatic. They couldn't believe they'd seen a rocket fly to the sky in real life.

The mini rocket was named "Lead Mine School No. 1" after the school, located in Pu'an County, situated in a shabby rust belt within the southwestern province of Guizhou. It was a 1.37-meter-long sounding rocket with a transparent body tube. Besides taking meteorological measurements in the upper atmosphere at an altitude of about 800 meters, the gadget could take aerial photos and collect data for telemetry.

"I wish in the future I could fly in a rocket into the universe to see whether Mercury can spray water and whether Mars can breathe flames," a boy said when asked what he was thinking about upon seeing the rocket take off.

Last October, when the students watched the livestream for the launch of the Shenzhou-13 crewed spaceship at school, they were so excited that they crowded around their principal Huang Guocheng with a flurry of questions. Huang was stumped, but impressed by the children's craving for knowledge about the spacecraft and the universe. "We have science courses for the children but those are more focused on physics than on astronomy," he said. So he decided to invite someone with more knowledge in this arena to sate their curiosity.

Days later, two software engineers from the eastern city of Hangzhou volunteered to give online classes to the students with the help of a local poverty alleviation commissioner. Cao Lin and Dai Lichen, the two coders and also astronomy enthusiasts, started online science courses for children called "Into the Sky," which had animations about space and even a green screen set up for livestreaming.

During the classes, the children raised many questions. "Why is there no water on Mars?" "Why are there so many craters on the Moon?" "Will the sun collide with the Earth in thousands of years?"

The two men answered them one by one until one student asked, "Can we make a rocket?"

After hesitating for a few seconds, they said, "Okay, let's give it a try." The children, said Cao, burst into cheers. At that moment, it was impossible to say no, Dai recalled. Dai Lichen tries to fold a parachute without its lines getting entangled in Hangzhou, where he and Cao Lin work as software engineers. /Video screenshot

Dai Lichen tries to fold a parachute without its lines getting entangled in Hangzhou, where he and Cao Lin work as software engineers. /Video screenshot

Hence an amateur rocket team was born. A cloud engineer, 36-year-old Cao flies airplanes for a hobby and has a pilot's license. He once built a flight simulator for a Boeing 737 and fighter jets from the Chinese air force. His colleague Dai, 33, who works on developing digital products and solutions, is also a flying enthusiast.

But designing and building a rocket was much more challenging. "We are two software engineers and have limited knowledge about rocketry, even though we like it a lot," Cao said. Besides software engineering, knowledge in disciplines ranging from mathematics, physics, chemistry to electrical and mechanical engineering were needed.

They were confronted with a range of questions such as how long the rocket should be, where the energy comes from and how it follows a curved trajectory.

"Take a very simple example. To prevent parachute line entanglement, we tried many ways to fold the parachute," Cao noted. "At the time, we were confronted with more than 90 problems so that we once thought about making a water rocket instead."

But they felt compelled to satisfy the children's curiosity and passion for creativity. "We simply couldn't let them down."

For three months, the two men spent every weekend building the rocket through trial and error. They had to test at night since there was light and space restrictions in the daytime, often going to bed after midnight.

Engine failure, a body that broke up, avionics systems that interfered with each other, data loss, and communication outages… "Small as it was, we encountered almost all of the problems that could come up in building a real rocket," Dai recalled.

The two posted these challenges on an online forum for space enthusiasts, which immediately caught the attention of astronautics professionals and young amateurs. They flocked to the online forum to help with designing, scale aeromodelling and flow simulation among myriad technical challenges. Yu Chang, a graphic design and printing major at a university in Shenzhen, even volunteered to join the team.

Together, they 3D printed the hulls of the rocket, welded the flight lines, blended the solid fuel... Day by day, they made all the 100-odd parts needed to build a miniature rocket. In early December, they successfully tested the engines.

"We tested every component and made the parts for assembly in Hangzhou. But we'd like to bring all the parts and tools to Pu'an to build the rocket along with the children," said Cao. Going to rural schools in remote mountainous areas wasn't an extreme experience for either of them. Cao went to Bijie, a city with the largest population under the poverty line in Guizhou, after graduation, while Dai had been a volunteer in rural schools teaching popular science. 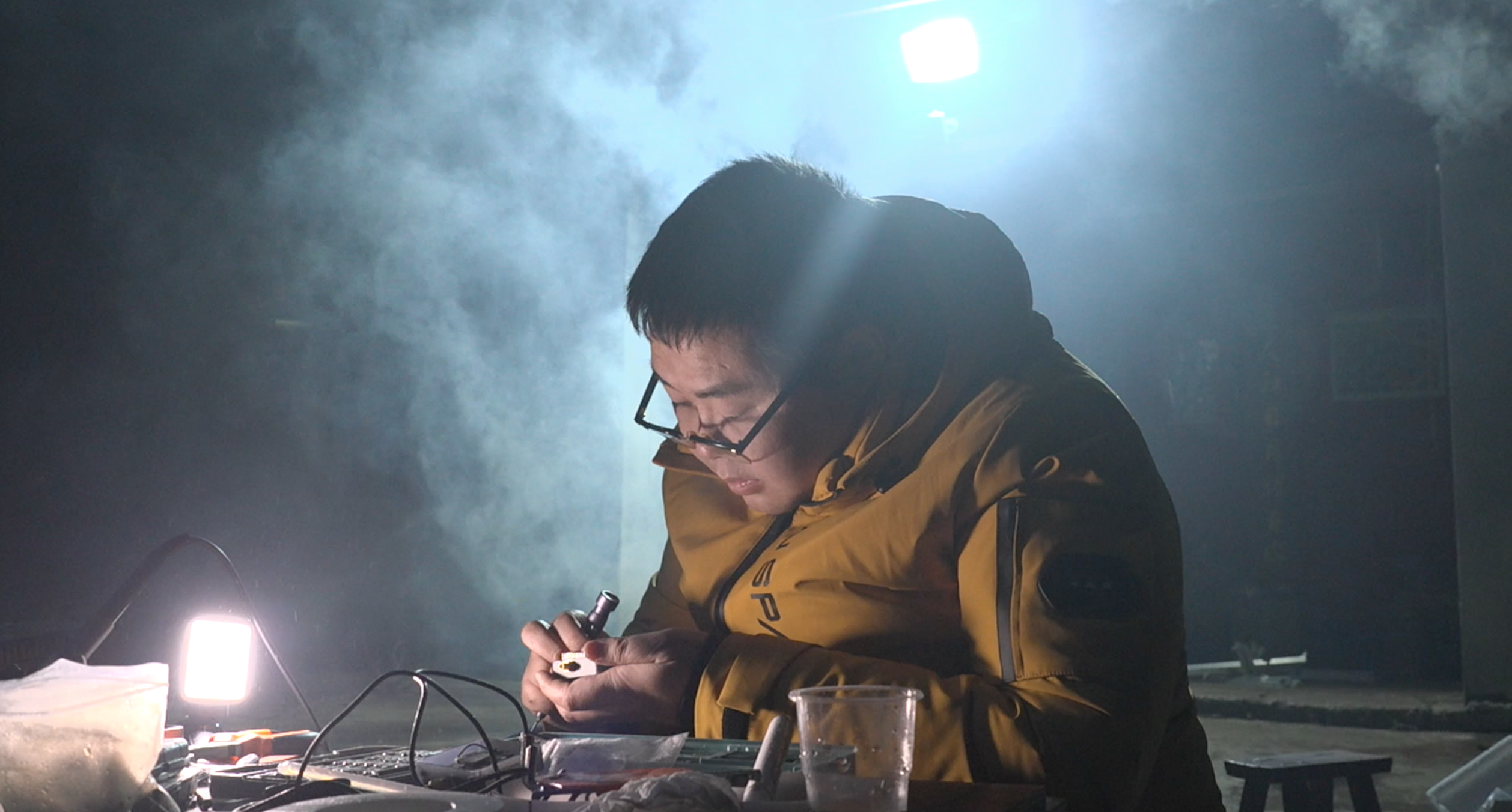 Cao Lin assembles parts of the mini rocket in a cottage beside the idle poultry farm after arriving in Pu'an with Dai Lichen. /video screenshot

Cao Lin assembles parts of the mini rocket in a cottage beside the idle poultry farm after arriving in Pu'an with Dai Lichen. /video screenshot

Look up to the sky

On the first day of 2022, Cao, Dai and Yu arrived in Pu'an, with 11 trunks full of rocket parts, assembly tools and materials. Their first task was to find a safe, proper launching site, which took much more time than expected because of the county's inclement weather and complex terrains. They finally settled on an idle poultry farm three kilometers from the town with the help of Huang and several local teachers.

Then in a barely-roofed cottage beside the farm, more than 140 students gathered, their faces glowing with excitement. Cao and Dai showed them all the components and materials and assembled them into a mini rocket together with the children.

"This is the engine mount, the body tube, the fin, the launch lug… When the rocket soars up to 800 meters in the sky, the parachute will open automatically and we'll get our test data simultaneously..."

Pu'an is like most other places in Guizhou, brimming with raw natural beauty but also mired in poverty and suffering from a labor drain. It was among the last national-level impoverished counties to shake off poverty in 2020. The local economy mostly depends on agricultural produce such as tea, garlic, beef jerky, as well as an old mining industry. Some mines – coal, lead, other heavy metals – have been closed in recent years. Adults left for big cities to make a living for their families. Parents of one third of the students at the Lead Mine School are migrant workers, according to Huang, who's been the school's principal for eight years.

Students here lag behind their urban peers in many measures of success, partly due to parents moving away for work and high teacher turnover rates. "Teachers still pursue better opportunities in cities, despite that both working and living conditions in our rural region have improved in recent years," Huang said. But he's gratified that the school has been much better equipped since 2016 when a rural education support plan was launched. "STEM supplies are no longer a luxury for our students." 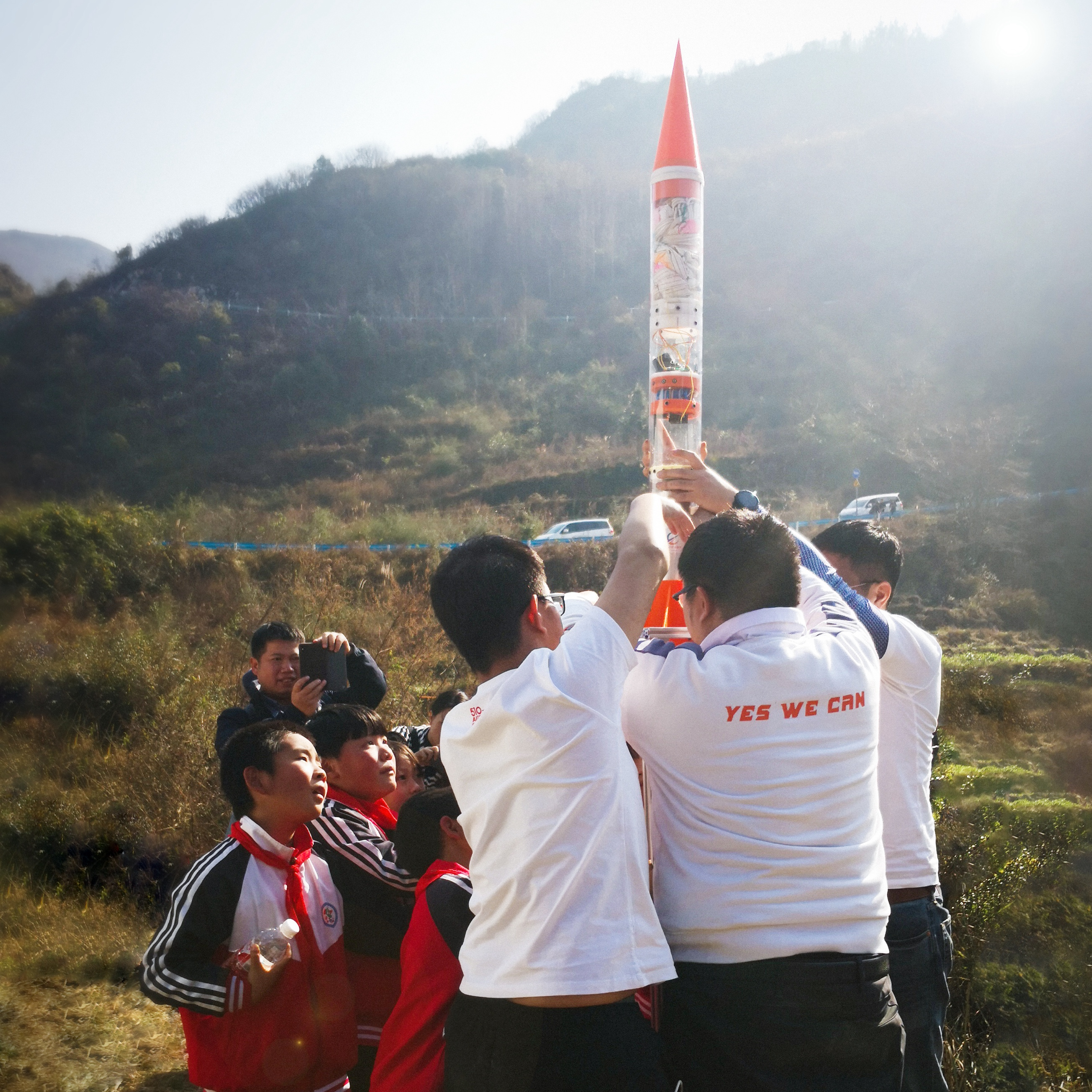 Cao Lin, Dai Lichen and Yu Chang prepare for the rocket launch along with the students from the Lead Mine School in Pu'an, on January 5, 2022. /Photo courtesy of Alibaba Group

Cao Lin, Dai Lichen and Yu Chang prepare for the rocket launch along with the students from the Lead Mine School in Pu'an, on January 5, 2022. /Photo courtesy of Alibaba Group

On January 5, the mini rocket was ready for launch after five days of instruction, discussion and hands-on assembly. Students wrote their dreams on the transparent body tube of the rocket. "I want to be an astronaut when I grow up," a boy wrote. Another student, who likes disassembling gadgets to see what's inside, wrote, "I hope to become a designer." Their cheeks reddened in the cold air at the high altitude, where they've lived all their lives.

"The other day, the kids saw me place an anemometer. I casually asked, 'What's it for?' One of them replied immediately, 'It's used for measuring instantaneous wind speed.' I was very surprised," Dai said. "This is the whole point of making the rocket."

Beyond cultivating the students' passions and desire to learn about building rockets, the two coders along with the school staff hope they can play a role in connecting the rural students with China's booming space industry. "Perhaps one of them here will be an astronaut to Mars in the future," Cao panted, his voice filled with delight.

Reported and written by Wang Xiaonan