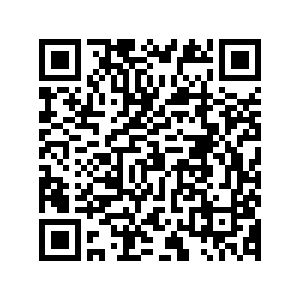 With the COVID-19 pandemic very much still with us, and new variants threatening to derail holiday festivities, many Chinese around the world will be unable to make their trip home during the Spring Festival, the biggest holiday in China. For those who will miss this all-important tradition in which families reunite with hugs and tears after a year apart, making a familiar dinner is one way to sate nostalgia.

China's cuisines are as diverse as its expansive country and population. From Peking duck to Cantonese wonton, from Sichuan's hot pot to Shandong's cuttlefish roe soup, each dish is linked to a past, a custom, an inheritance.

Each flavor is a memory of family and home. Be it a plain bowl of congee or a lavish, elaborate feast, each flavor offers a sense of belonging at a time when people continue to live in uncertainty and isolation. A comforting meal on the New Year's Eve is nothing short of magical.

We've collected stories about people who can't make it home for the family holiday and plan to cook for themselves or their nuclear families to get a taste of the familiar as the pandemic rages on. This is the second of our two-part series. You can read the first part here. 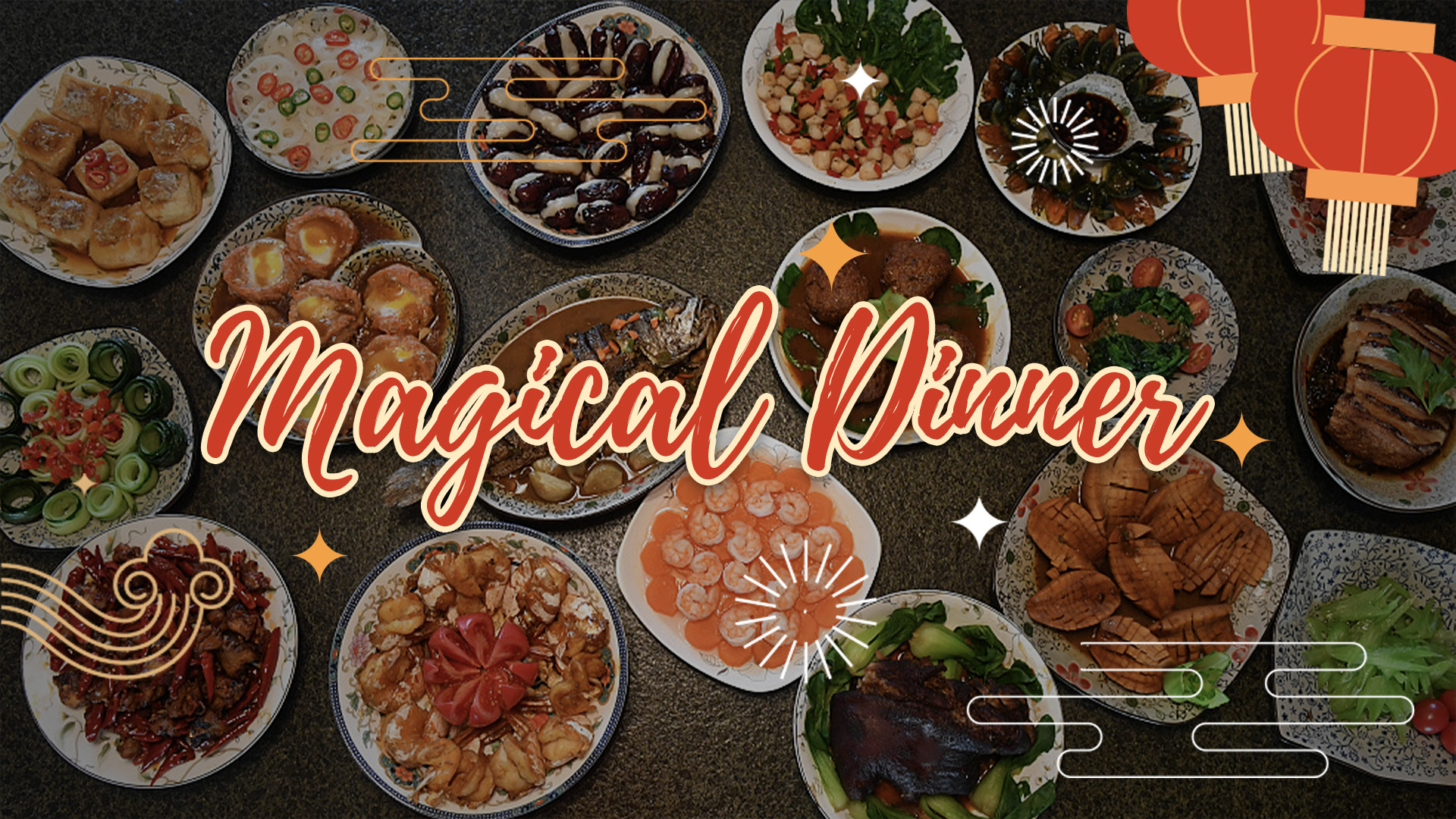 I was born in the southern city of Guangzhou, known as the gastronomic capital of China. This is my 10th year in Colombia – before this I had spent another decade in Venezuela. Every winter holiday, the run-up to the Chinese New Year used to be my only time back home visiting my parents and relatives. But due to the pandemic, I haven't been home in three years.

For the Spring Festival, the most memorable dish is fried tilapias, a constant on the dining table on the first day of the Chinese New Year. I was born in the 1960s when Chinese people were still struggling to feed themselves and relied on food coupons that were issued on monthly rations. Usually for a meal I'd just lick a tiny morsel of brown sugar to go with a bowl of rice. Only during the Spring Festival could we have a hearty meal – those family holidays were my happiest days every year.

On Spring Festival Eve, my mother would cook two tilapias but not allow us kids to eat them immediately. She'd leave them until the next day – the first day of the Lunar New Year. "Fish" and "surplus" are homonyms in Chinese. Having fish at the beginning of the Lunar New Year means "we'll have more than enough in the coming year," my mother would always say. She's a good cook. Her paternal grandfather (my grand-grandpa) was Dr Sun Yat-sen's chef, her father (my grandpa) was a chef at the Nanwu Middle School canteen, a prestigious school which I once attended. It seems that cooking is in our family's blood. 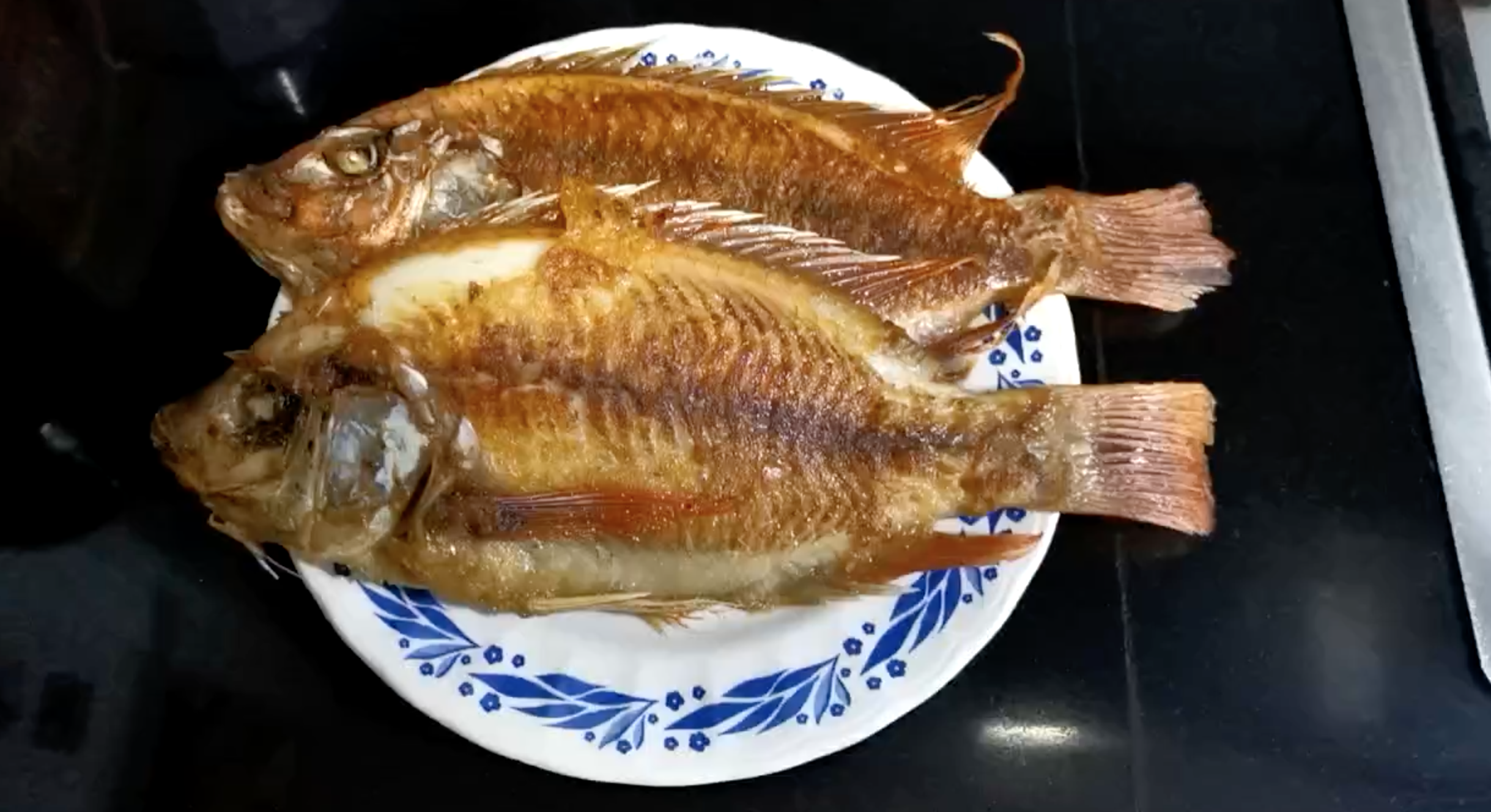 The fried tilapias before braised the next day. /Yu Zhijian

The fried tilapias before braised the next day. /Yu Zhijian

I'm good at cooking, too. During the 20 years that I've been away from home, I spent two to three hours a day on cooking for my nuclear family. However, in Cantonese cuisines, both staples and ingredients are fresh and of high standard, which are hard to find in Colombia. For one, there's a limited Chinese population, standing at around 20,000, and hence very few Chinese markets and catering businesses; for the other, local residents are used to cooking frozen meat.

For the upcoming holiday, I'll buy two frozen tilapias and make the dish I grew up yearning for, as I did on every Spring Festival Eve. I've done this for 20 years but still can't make it with the same flavor that my mother could. Perhaps she put her heart into it, making it special.

First scrape the scales off the tilapias, then fry them on a slow fire till they turn golden in color, and set them aside overnight.

When you eat them the next day, heat the pan before allowing the oil to heat up. Put in ginger flakes, cut scallions and mashed garlic.

A few seconds into stir-frying these ingredients, put the tilapias in.

Add some water, yellow wine, soy sauce, and a pinch of salt and sugar.

Get it braised for 10 minutes before it's ready. 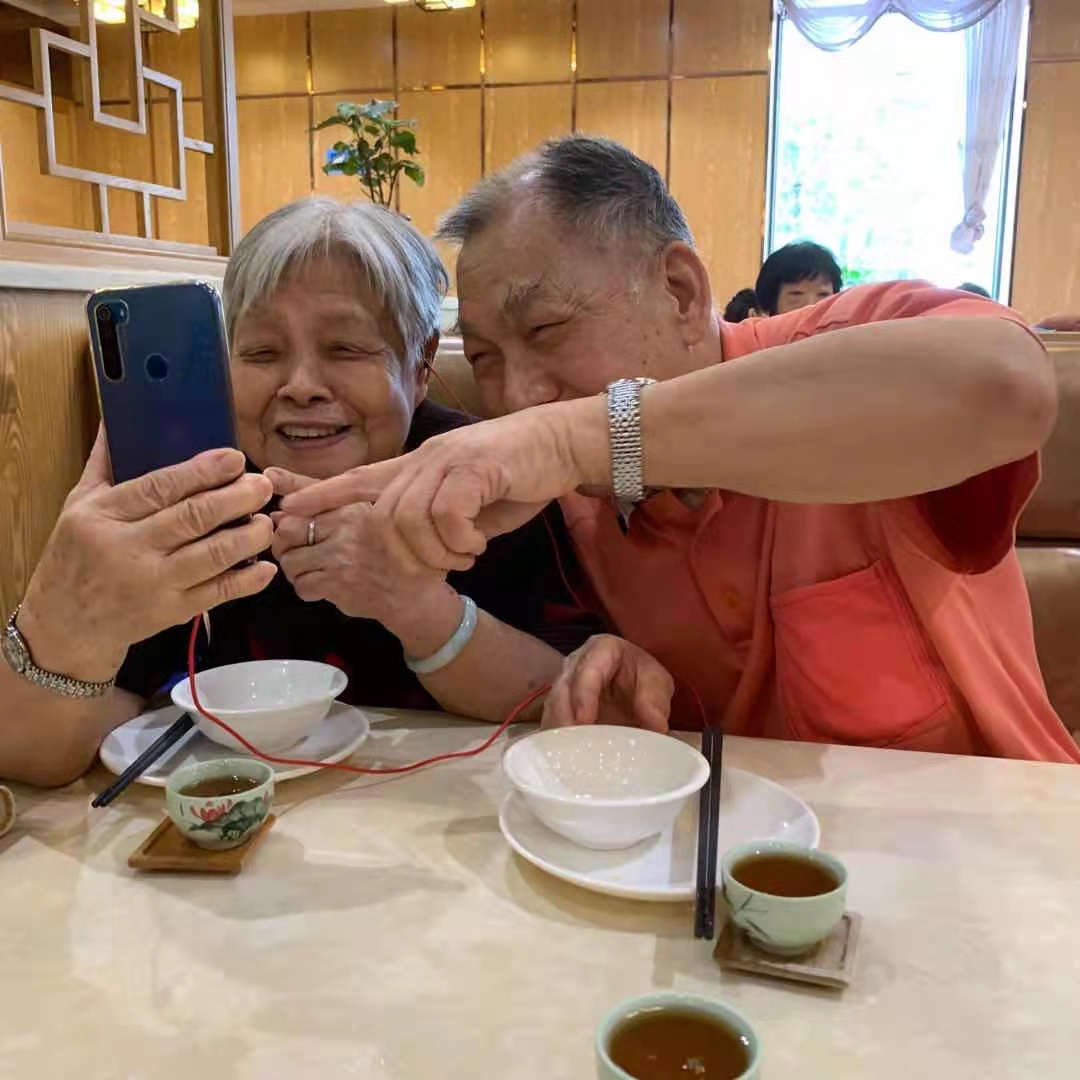 My home is in Changhua County of Taiwan region. I came to Beijing to study for a master's degree in 2011 and then I stayed for a PhD and post-doctorate studies. Now I'm a physical education teacher at Peking University.

I married a schoolmate from Henan Province and settled down in Beijing, which is my second home, though I usually describe myself mockingly as a "Beijing drifter." Now we have an 18-month-old baby. My parents used to object to me settling down on the mainland but gradually accepted it, as I've developed a stable career and have a happy family. They even provided most of the down payment for us to buy a house of our own in Beijing, where property prices have been prohibitive.

I haven't been home for the past two Spring Festivals due to the pandemic, and I won't be able to go back for the upcoming one as new variants have emerged and my girl is too little to travel.

In Taiwan, we celebrate the Spring Festival with a fancy dinner, like on the mainland. No matter how busy we are, we have to be home for a reunion dinner on that evening. We'd have goose and duck meat, stewed chicken with pickles, and toasted karasumi, in addition to a hot pot we'd be sitting around. Karasumi is made from salted and sun-dried mullet roe, and usually needs to be toasted before becoming a delicacy. Toasted karasumi, served along with liquor, is my favorite.

Changhua is bounded by the sea and we have a lot of fresh seafood. I used to drive with my uncle to Chiayi Fish Market to buy karasumi shortly before the Spring Festival every year back in Taiwan. Beijing doesn't have a market that sells karasumi, but now I can get it online. It only takes three to five days to ship it from Taiwan to Beijing.

Toasted karasumi is definitely on my list for the upcoming Spring Festival Eve dinner.

Prepare the following ingredients: karasumi and Jinmen sorghum liquor (a strong distilled liquor made in Jinmen, a county in eastern Fujian).

Pour the liquor into a plate, and immerse the karasumi in the liquor.

Roughly a minute later put the karasumi under a small lighter flame.

Turn the karasumi with a tong or a pair of chopsticks to get all sides evenly heated until the surface turns yellowish. The whole toasting process takes around 10-15 minutes.

Wait for the toasted karasumi to cool down and cut it into pieces. Then you can have it along with apple, onion, or wrapped in French toast.

I'm from Inner Mongolia and I've spent seven years in the U.S., completing my master's and PhD and now working as a physical therapist at a clinic.

Not long ago, my husband and I moved from Los Angeles to Lake County, a much quieter, sparsely populated place, due to my job change. In LA, there were a lot of Chinese restaurants and we didn't have to worry about finding traditional Chinese delicacies, but now in Lake County, there are few Chinese diners. Even the nearest Chinese supermarket is a two-hour drive away, so we go to that market once every two weeks to stock up on ingredients and seasonings for the next fortnight. I've been learning how to cook home cuisines through video chatting with my parents or sometimes from YouTube videos.

Recently I've learned how to make steamed buns, which I hadn't eaten for seven years, pancake rolled with crisp fritter, and Youpo Noodles (also known as Biangbiang Noodles). They are spicy, often hand-pulled noodles which are a specialty from north and northwest China.

I have a special bond with Youpo Noodles, which gave me a lot of comfort during my days preparing for the physical therapy license exam. I spent almost every evening and weekend in a library and the thing I anticipated the most every day was a bowl of Youpo Noodles my husband would bring to me. He bought the noodles from Xi'an Kitchen, which has very authentic cuisine from northwest China. Those bowls of noodles were real "chicken soup" for me during those stressful days. After two months of hard work, I passed the exam.

Now that we moved away from LA, I started learning to make the dish myself. 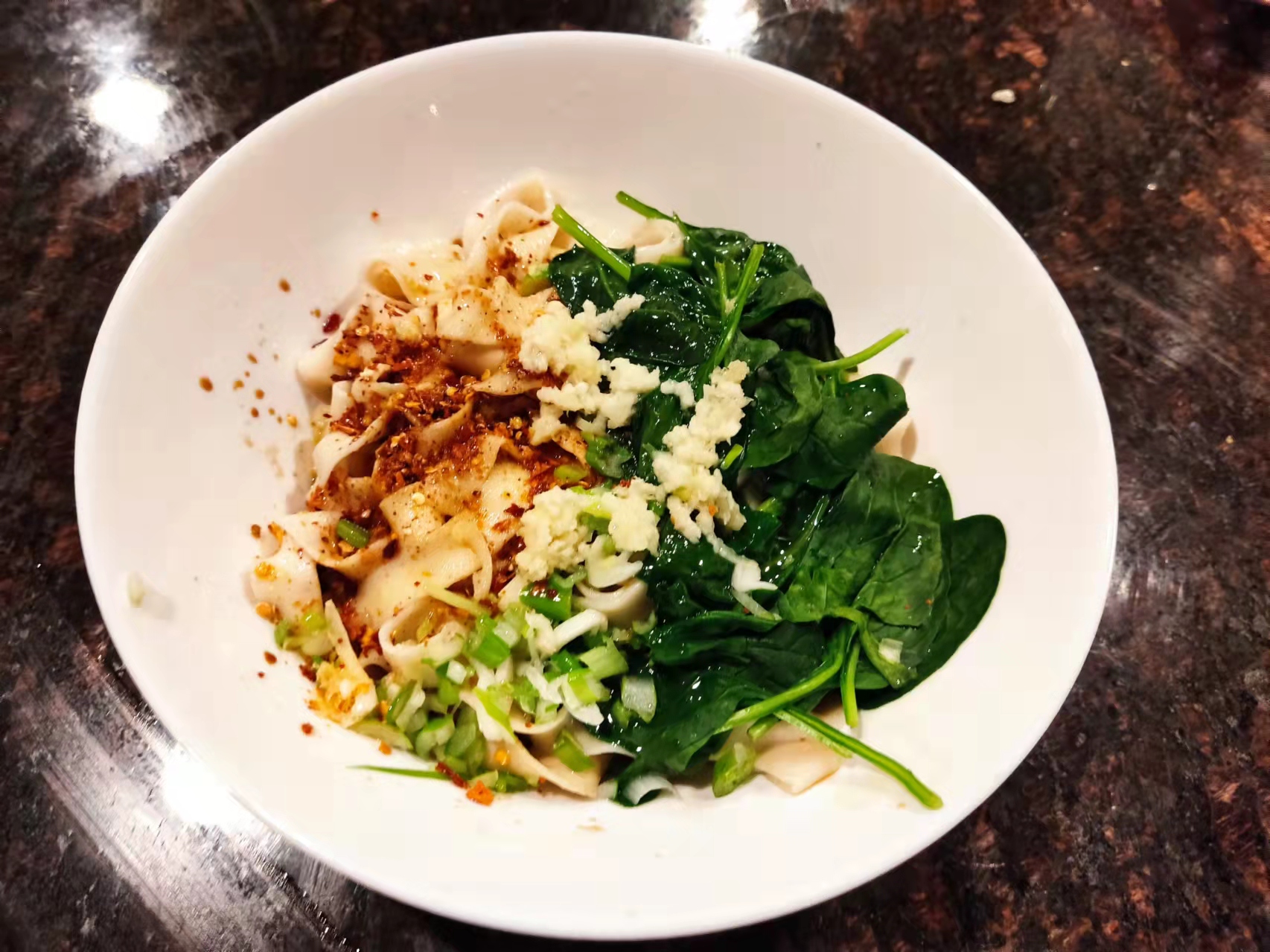 A bowl of Youpo Noodles. /Joy

A bowl of Youpo Noodles. /Joy

My husband and I have been very busy at work. For the Spring Festival in the past few years, we cooked several simple dishes ourselves, watched the Spring Festival gala and video chatted with our family and friends, reminiscing about the past. But this Lunar New Year holiday will be different. I just had a baby and my mother flew here from China to look after me. It's exciting since we haven't seen each other since the outbreak of the pandemic. We plan to make dumplings filled with pork and napa cabbage for the Spring Festival Eve dinner, and of course, Youpo Noodles.

The first and most difficult part of it is the noodles themselves. Since it's too much trouble to hand pull noodles by ourselves, we use a noodle maker instead, though the noodles it produces are not that bouncy and chewy.

Put wheat flour and water in the maker and select the widest strands.

Put this topping in a bowl and slide the noodles in.

I've been absent from my family reunion dinner table on the eve of the Spring Festival for the past five years. Since I came to London to pursue a master's degree in 2018, I have only spent two months back home in eastern Anhui Province, in the autumn of 2019. A few months later, COVID-19 arrived.

Whenever a traditional Chinese holiday comes, I am always overwhelmed by sadness. "Dining with family or traveling with friends during holidays is what life is about. How about my life? What's its meaning even though I'm doing a PhD?" Such thoughts often come up when I'm alone in the UK during Chinese family holidays.

I miss home and the reunion feast on the eve of every Lunar New Year. My grandma and mother did most of the cooking for the big dinner. Since it's cold and there's no heating in Anhui during the wintertime, a chicken hot pot is a constant. Shoving the chicken in my mouth while hearing the soup in the hot pot bubbling is pure joy. Pancakes and vegetables would be tossed into the pot next. Steamed crucian carp and meat ball soup are also my favorite. But since there's no river fish in London and pork here has the smell of pork fat, I like to make a single-person chicken hotpot. 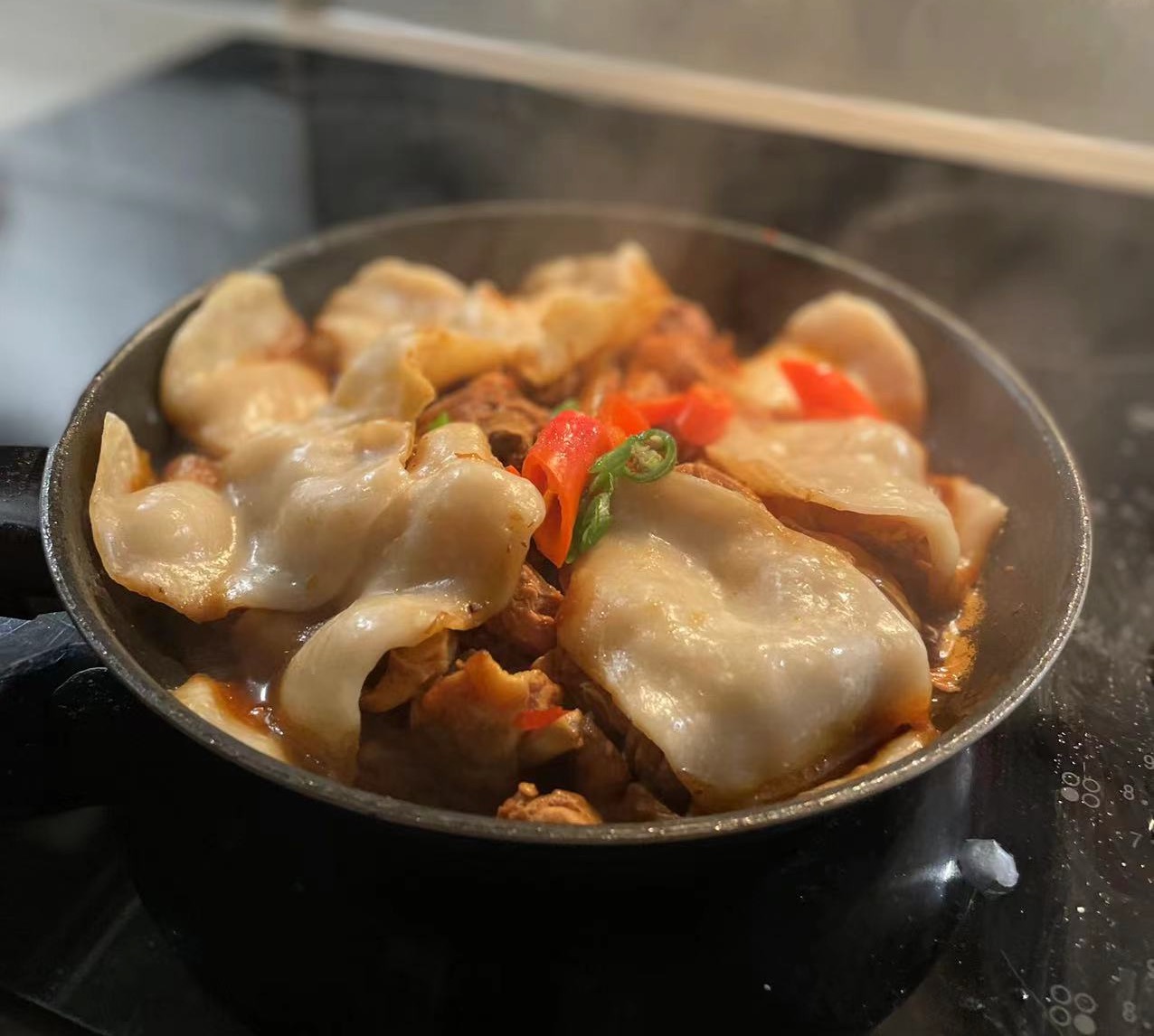 Find a wok instead of a flat pan.

First knead wheat flour into a big piece of dough, wait 30 minutes for it to ferment.

Rub the dough into same-sized, small and round buns and macerate them into a bowl of water for 15 minutes, which helps produce thin, soft and lucid buns. During the fermentation of the dough, you can blanch and chop the chicken.

Fry for three minutes before pouring in some water and leave it to boil.

Ten minutes later, stick the buns onto the side of the wok and add water to boil for another 10 minutes before it's ready.

Reported and written by Wang Xiaonan