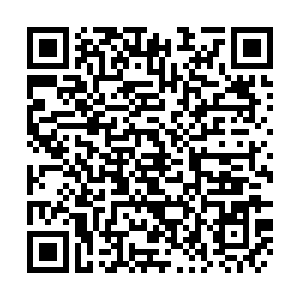 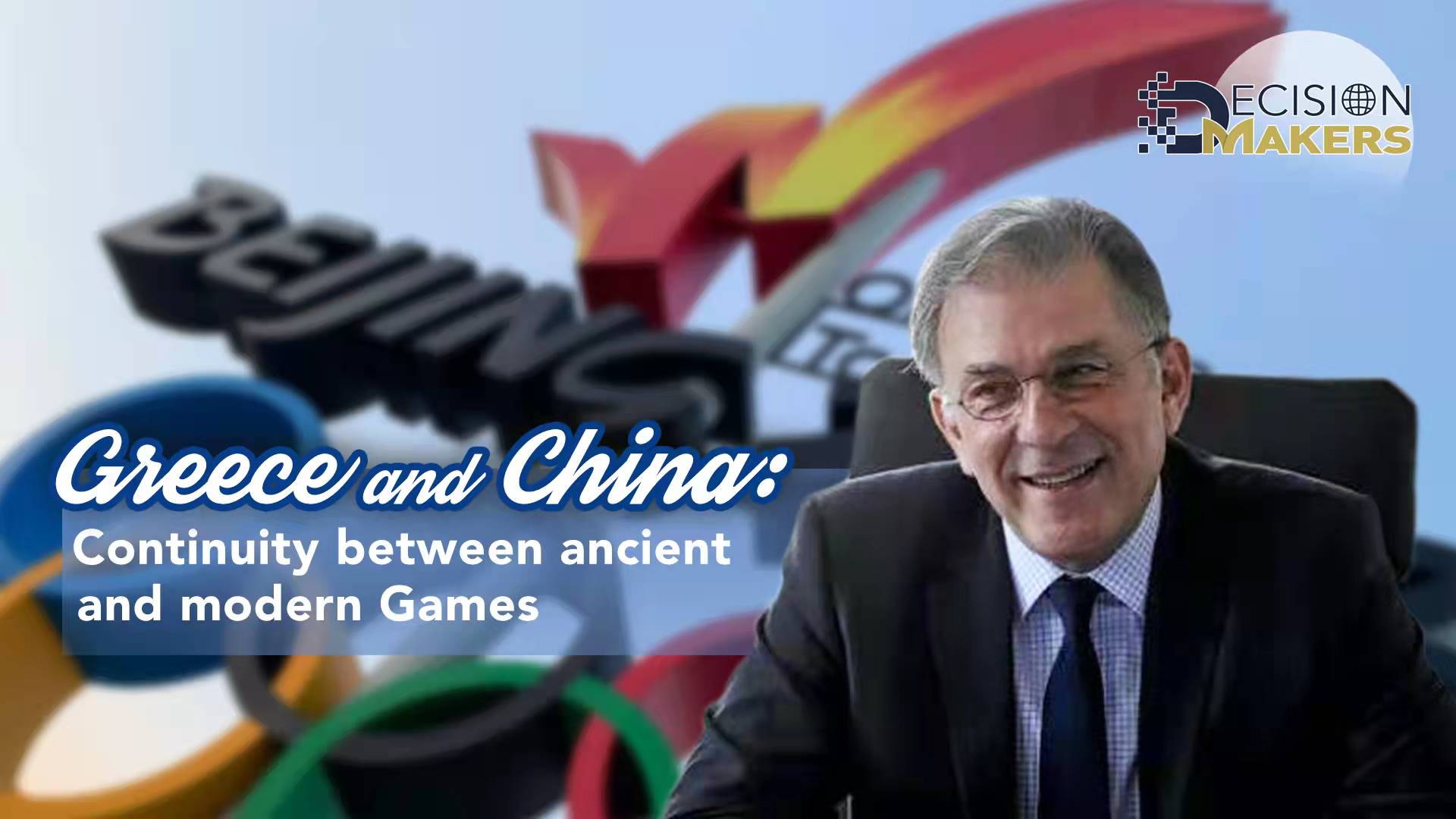 Editor's note: Decision Makers is a global platform for influential leaders to share their insights on events shaping today's world. Georgios Iliopoulos is the ambassador of Greece to China. This article reflects the author's opinions and not necessarily those of CGTN.

On February 4, 2022, the Olympic Flame will be lit again, for a second time after the 2008 Games, at the Beijing National Stadium, during the opening ceremony of the Winter Games of 2022. The flame stands for the Spirit of the Games given by Greece to the whole world. It conveys both the perennial values of the ancient Olympiads in Greece and those of contemporary Olympism.

Being the ambassador of Greece to the People's Republic of China and as a Greek, I obviously feel very proud for being part of the Beijing Winter Games torch relay.

The 2022 Winter Games flame that arrived in Beijing from Ancient Olympia last October is a symbol of continuity between ancient and modern Games and a major symbol of today's Olympic movement.

The idea for the Olympic flame derived from ancient Greece, where a sacred fire was lit and kept burning throughout the celebration of the ancient Olympics on the altar of the sanctuary of Hestia. Fire, one of the four elements in ancient Greece, played a central role in the ancient Games held every four years, when Zeus was honored.

In ancient Greek cosmology and mythology, as well as science, medicine and philosophy, fire had divine connotations since it was thought to have been stolen from the gods, from Zeus himself, by Prometheus. It was him who offered the gift of fire to humanity, which benefited from it and helped it grow towards civilization and true knowledge.

Sacred fires were present at many ancient Greek sanctuaries, including those at Olympia. Similarly, today, fire is seen in a prominent place in the Greek Orthodox tradition. The Olympic Games, after all, were not only a major sports event, but held a spiritual significance, as is the case even today.

The flame of the Olympic torch stands for passion, persistence, creativity and ingenuity. All these traits underpin the core values of the Games, which is excellence or achievement (or "Athlos" in Greek) in sports through physical and intellectual discipline. Excellence was a core value of many other competition events or Olympiads in ancient Greece, including competition in poetry, music, arts and philosophy.

Fire is kindled by the light of the sun, as its rays are concentrated by a parabolic mirror. It is therefore directly connected to the sky or the Supreme. It symbolizes our actions, intent, hard work and discipline in the sports arena; and all these are essential for every achievement in life. Fire transforms everything and its flame always points towards the sky. It unites all again with the sky. This is very similar to China's philosophy and its core idea of union between heaven, man and nature. The ancient Greeks similarly believed that a man's "healthy mind is inseparable from a healthy body." 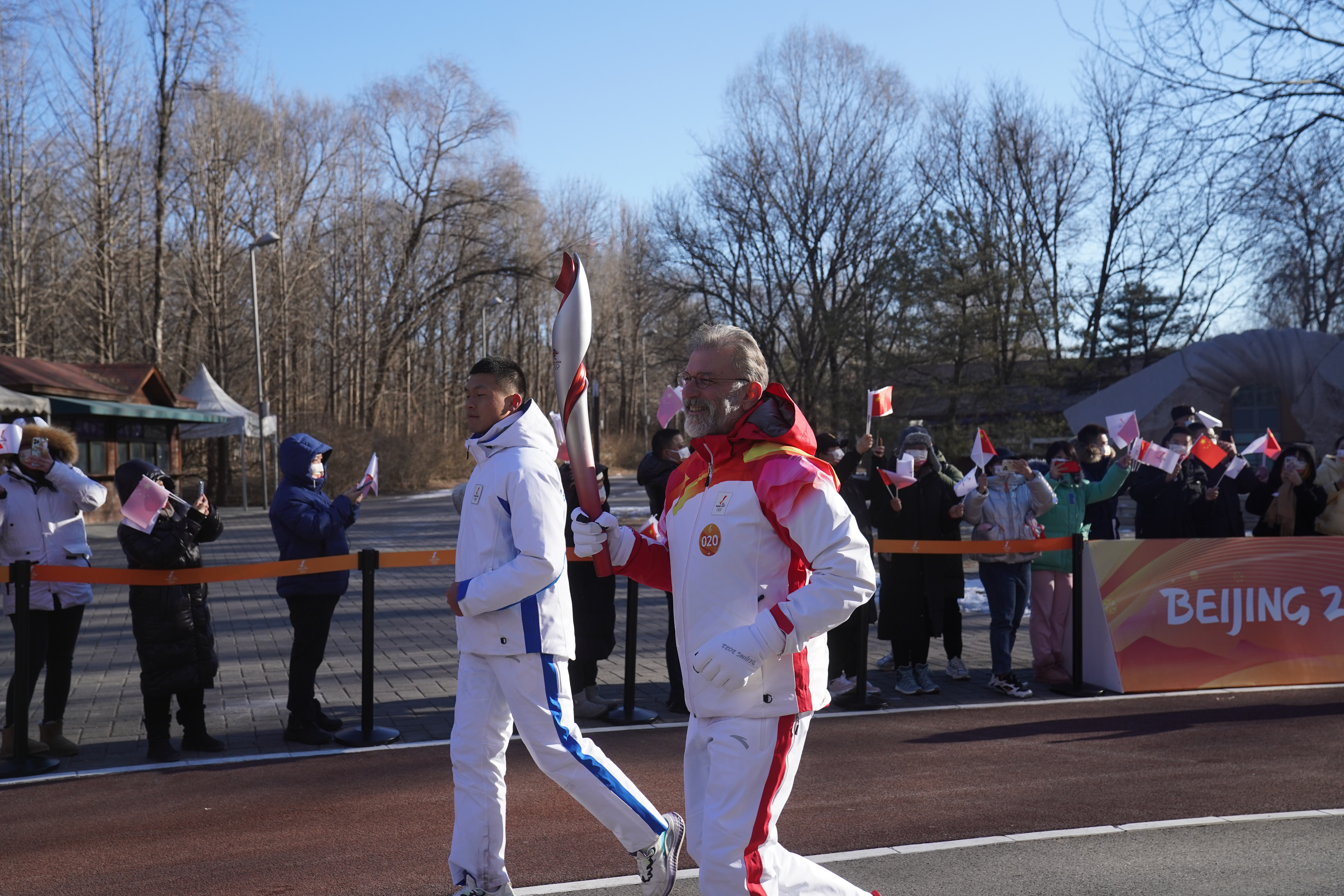 The Ambassador of Greece to China Georgios Iliopoulos participates in the Beijing 2022 torch relay in Beijing, capital of China, February 2, 2022. /Wang Haixin

The Ambassador of Greece to China Georgios Iliopoulos participates in the Beijing 2022 torch relay in Beijing, capital of China, February 2, 2022. /Wang Haixin

This is the main symbolism of the Olympic flame and the torch relay: union and connectedness that can be achieved through fair competition, openness, transparency and common rules, shared and respected by all. This idea of fair competition is also a core value of the Games. It is also an essential prerequisite of another value of the Olympic Games: Peace that can be achieved through truce and reconciliation.

Evidently, today, we are still in need of these values: Excellence, fair competition and truce with regard to our relationship with others, within and between our societies. And not to forget, very importantly, peace and union with our natural environment.

The torch and the Olympic flame point to these notions and values, underpinning the Olympic Games and reminding us of the ecumenical dimension of Greece's civilization that inspires all of us today.

Beijing is becoming, as Athens did with the revival of the Games in 1896 and in 2004, a dual Olympic city. Even more, Beijing is about to become the first city that has hosted both the Summer and Winter Games. This places a great responsibility on the city of Beijing, its people and China as a whole. China may demonstrate, like every Olympics host city, that the Olympic Games can contribute to broader aims, regarding not only the preservation and promotion of Olympic values, but also international cooperation, openness, reciprocity and peace. A good example would be our relationship with the natural environment. This is an area where all these principles and values may apply.

COVID-19 has harmed dramatically all economies and has presented us with difficult choices. The ongoing pandemic is a global challenge that requires a global response. What we all need, in view of the ongoing pandemic is working together in reviving our economies through equal partnerships and solidarity, transparency and market access. We need cooperation in meeting these challenges, reigniting our economies and accelerating economic recovery.

When it comes to Greece-China relations, there is much room for addressing asymmetries and imbalances in a number of fields, rendering our relationship more reciprocal, fair and optimized. To achieve this, we need to bring into alignment the excellent level of our political relations with that of our existing economic interaction and exchanges, notably in investments and trade.

Much needs to be done also in the fields of tourism, culture, creative industries and education. Evidently, the pandemic also poses unforeseen challenges in holding the Greece-China Year of Culture and Tourism, which has been expanded till the end of 2022. Greece had previously planned a number of archaeological exhibitions in China and we look forward to the assistance of China's museums and pertinent authorities that will make it possible to have them hosted in China.

The XXIV Olympic Winter Games may bring our nations and peoples together for yet another time. This is especially true as regards to Greece and China. Our countries collaborated closely just before the Beijing 2008 Games, after the Athens 2004 Games and Greece at that time greatly assisted China in hosting a very successful Olympiad. Today, I am confident that the Beijing 2022 Games will be equally successful.