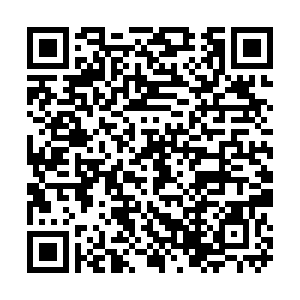 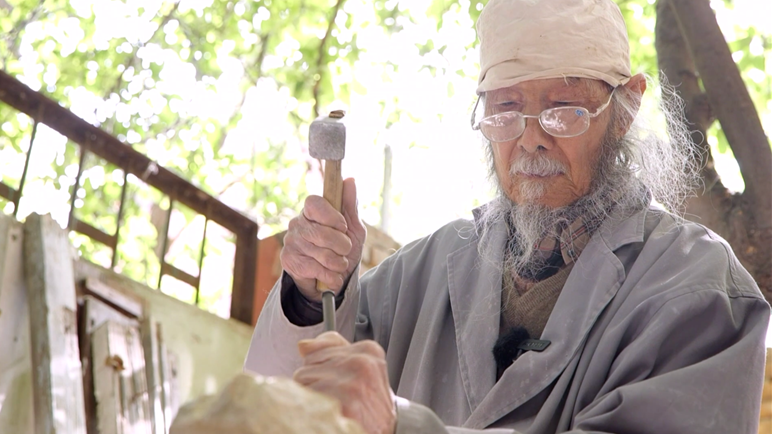 In the recent history of Chinese art, the story of one particular sculptor stands out. With an artistic career spanning seven decades, 92-year-old Liu Huanzhang has witnessed many important stages in the evolution of Chinese contemporary art.

"Sculpture is an indispensable part of my life," said Liu. "I do it every day, even till now. I do it out of interest and love. It's my biggest hobby and gives me fulfilment."

Liu Huanzhang's talents and experiences are well known in China. His exhibition "In the World" offers a great opportunity for many to better understand the development of contemporary Chinese art. 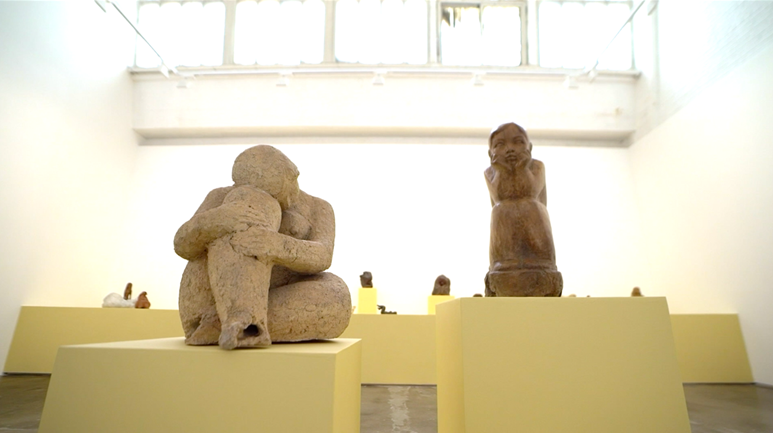 Sculptures by Liu Huanzhang displayed at exhibition "In the World." /CGTN

Sculptures by Liu Huanzhang displayed at exhibition "In the World." /CGTN

"For sculptors or artists of Liu Huanzhang's generation, their artistic development is closely related to the changes of the time," said Liu Ding, the curator.

Fond of sculpture since childhood, Liu Huanzhang got a fortunate break early in his career. In the 1950s and 60s, a number of sculpture departments, or majors, were established in art academies across the country. Liu was invited to enroll and he earned his position.

"Because of the training in the Central Academy of Fine Arts, he learned how sculptors who studied modernism in Europe in the 1920s and 1930s worked," said Liu Ding. "At the same time, he also witnessed how his classmates studied and made their creations. This experience was important to him."

In 1959, on the occasion of the 10th anniversary of the founding of the People's Republic of China, the country's capital, Beijing, saw the building of a number of important structures, including the Great Hall of the People.

Another was the Beijing Workers' Stadium, and this still features one of Liu's best known works. 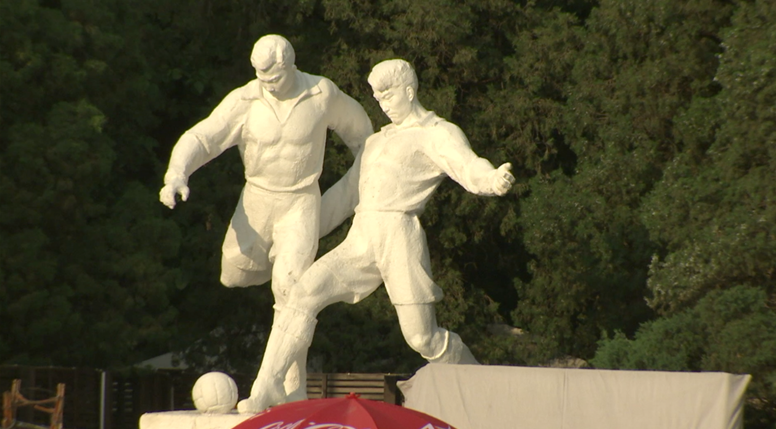 "These are two football players," explained Liu Huanzhang. "One is tackling, while the other is running with the ball. I've been asked many times about the models, as there were no such advanced tackling skills among Chinese players at the time. I told them I saw it in a Hungarian pictorial."

As his reputation grew, Liu Huanzhang started to think about how he could build on his talents.

In the early 1960s, he decided to hit the road, to find out more about how the ancients practiced sculpture. Liu studied the Buddha statues carved on the rocks hundreds or even thousands of years ago. He found that the faces of these bodhisattvas were quite distinct - they looked reserved and quiet, with their eyes half open.

Soon after that, Liu created one of his masterpieces, called "Young Lady." 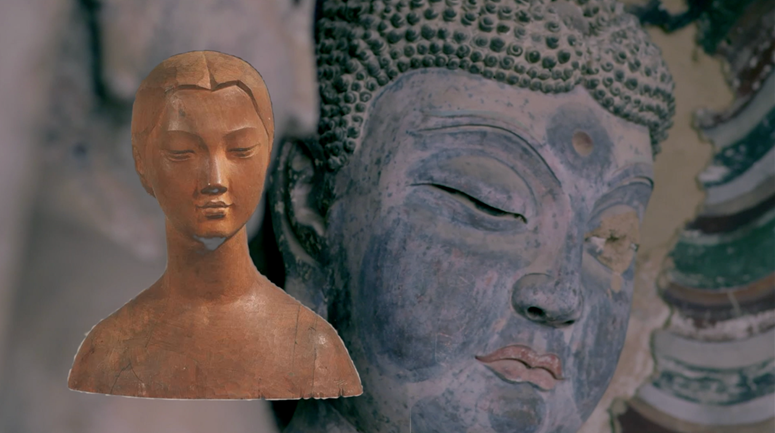 "Young Lady" and an ancient sculpture of Bodhisattva (R). /CGTN

"Young Lady" and an ancient sculpture of Bodhisattva (R). /CGTN

"This piece was carved with traditional Chinese skills after I came back from the studying tour in Dunhuang Mogao Grottoes," said Liu Huanzhang. "It's a young lady, looking quiet and pure. I created the image in the way ancient artists created Buddha sculptures. In those sculptures, Bodhisattvas all have their eyes half open."

The 1980s was an important decade for Chinese artists. Through the China's reform and opening-up policy, they began to seek change and innovation.

It was in those years that Liu Huanzhang moved to a higher level. Most of his works are relatively small, largely because he preferred to work on his own, but also because he only had a bicycle to move materials. 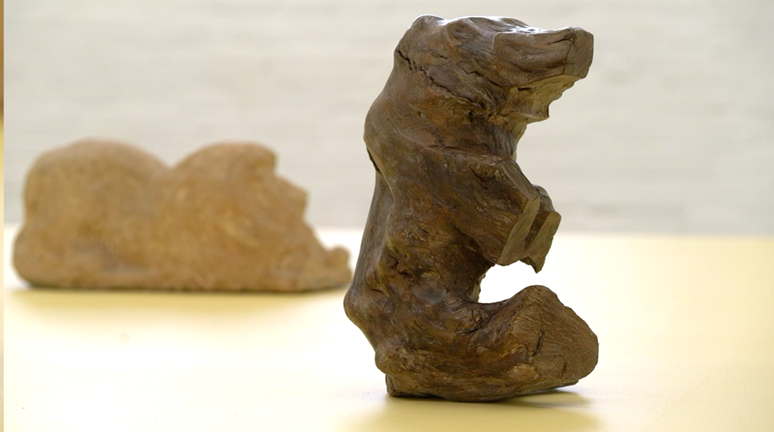 Day after day, one piece at a time. Since Liu turned 60, if anything, his new pieces seem to be closer to reality, as if they're learning from the world around him. 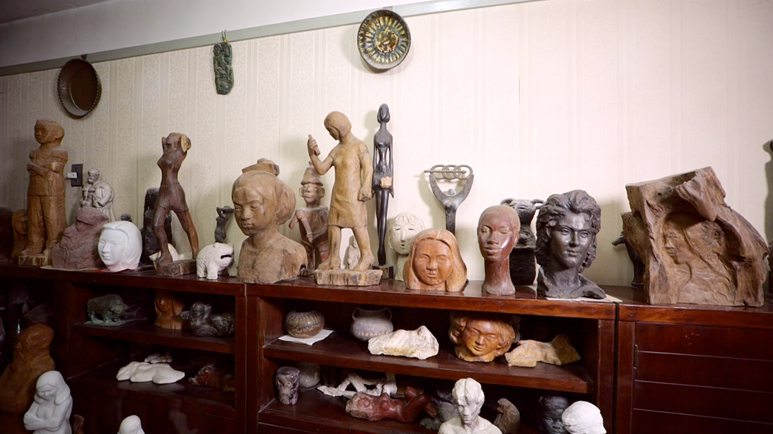 Liu's collections at his workshop. /CGTN

Liu's collections at his workshop. /CGTN

These works have recorded Liu Huanzhang's observations of the world. And, for many, they form an album of the past seven decades.