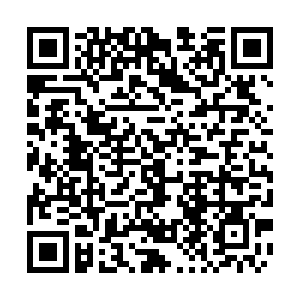 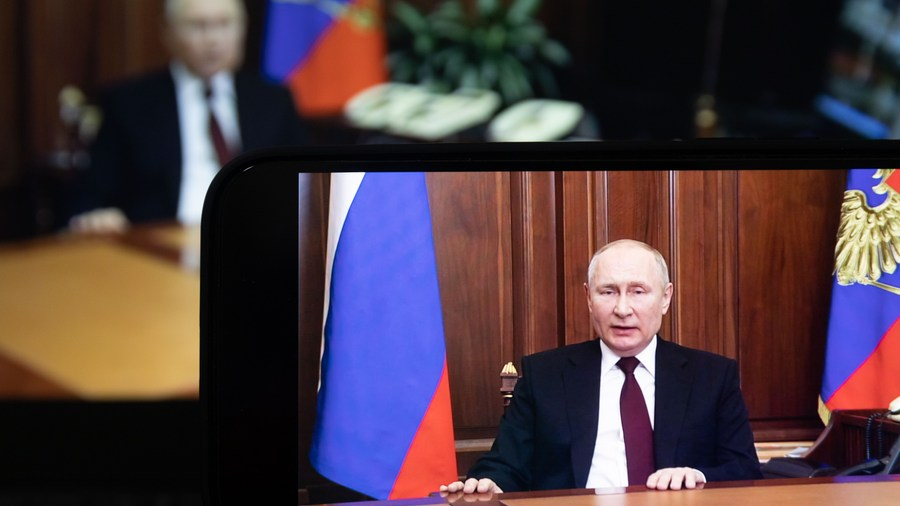 A screen displays Russian President Vladimir Putin speaking during a televised address to the nation in Moscow, Russia, February 21, 2022. /Xinhua

A screen displays Russian President Vladimir Putin speaking during a televised address to the nation in Moscow, Russia, February 21, 2022. /Xinhua

Russian President Vladimir Putin announced early February 24 morning that his country commenced a special military operation in Ukraine, aimed at "de-Nazifying" and "demilitarizing" the neighboring country. He also reiterated the claims that he previously made during the annual expanded meeting of the Defense Ministry Board on December 21 last year and a meeting of the Russian Federation Security Council on February 21 as well as his subsequent address to the Russian people later that evening about the existential threat posed to Russia by NATO's de facto expansion into Ukraine.

These moves essentially aim to neutralize his country's nuclear second-strike capabilities and thus place Russia in a perpetual position of nuclear blackmail vis-à-vis the U.S.

The Russian leader also spoke in detail about the aggressive history of the U.S.-led military alliance that was created decades ago to contain his country. Additionally, President Putin mentioned the humanitarian crisis in the Donbass republics, which he recognized as independent earlier in the week, as a justification for authorizing the ongoing operation. It was upon these bases that he cited Article 51 of the UN Charter, which enshrines the right to self-defense, as the international legal pretext for his dramatic decision. Nevertheless, the U.S.-led West has still accused Russia of carrying out an act of aggression, not self-defense.

Their accusations are predicated on a combination of factors, the primary one of which is their vehement denial that NATO poses any threat whatsoever to Russia. However, that position isn't credible since this anti-Russian military alliance has continued to expand eastward despite the Soviet Union's dissolution in 1991.

The U.S. withdrawal from arms control pacts such as the Anti-Ballistic Missile Treaty, the Intermediate-Range Nuclear Forces Treaty, and the Open Skies Treaty directly contributed to destabilizing the European security architecture in ways that unquestionably worked against Russia's national security interests.

Furthermore, the deployment of so-called anti-missile systems and strike weapons closer to Russia's borders throughout this time changed the continental military status quo initially agreed to by Moscow and the West in the 1997 NATO-Russia Founding Act.

It was for these reasons that Russia published its security guarantee requests in late December asking for legally binding guarantees halting NATO's further eastward expansion, the removal of strike weapons from Russia's borders, and a return to the aforementioned Founding Act. Regrettably, the U.S. and NATO didn't take these requests seriously so their response didn't satisfy Russia.

Instead of prioritizing a diplomatic solution to the undeclared U.S.-provoked missile crisis in Europe, Washington resorted to waging an unprecedented information warfare campaign aimed at misleading the public into believing that Moscow poses a threat to continental security.

These psychological operations relied on gaslighting and lies – that's why it's not for naught that President Putin's Thursday morning address declared that "the entire so-called Western bloc, formed by the United States in its own image and likeness, all of it is the very 'empire of lies.'" The U.S., likely expecting a kinetic Russian response in defense of its national security red lines, wanted the world to regard Russia as an aggressor.

From the limited information known thus far about Russia's special military operation in Ukraine, it seems to have achieved some of its immediate military aims, according to Moscow's officials. That neighboring state's air defense is already allegedly destroyed, which if true would give Russia air supremacy. 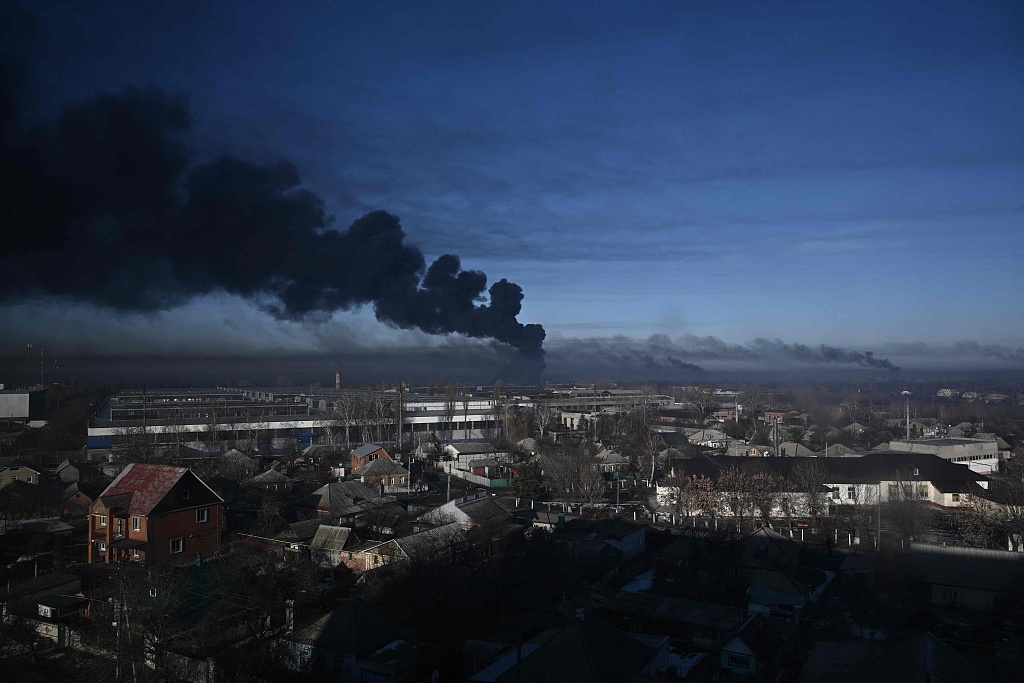 President Putin earlier assured everyone that his plans "don't include occupation of Ukrainian territory" so "no one should have any doubts that a direct attack on our country will lead to defeat and dire consequences for any potential aggressor." This should be interpreted as a warning to the West that Russia will defend itself from any unprovoked aggression from third parties with all means possible.

If Russia remains committed to the declared aims of its special military operation to neutralize imminent threats to its national security emanating from Ukraine by solely striking military targets, not any civilian ones, with precision weapons, ensure the safety of the people of Donbass republics, who are suffering "genocide," according to President Putin's earlier description of their plight, and doesn't subsequently occupy any of the Ukrainian territories that it still regards as being within Kyiv's writ, then there are credible reasons to describe this campaign as one of self-defense.

Despite the conventional phase of the Russian-Ukrainian conflict having only just begun, its outcome is already self-evident. Russia's national security red lines risked being crossed in the immediate future due to Kyiv's military-strategic collaboration with the U.S. and NATO, and the European security architecture is being revised through decisive military means initiated by Moscow in response to the Kremlin's very serious concerns.

It would have been better had the U.S. sincerely taken into consideration Russia's security guarantee requests for resolving this undeclared missile crisis diplomatically, but it's understandable why Moscow resorted to military means in the absence of that.