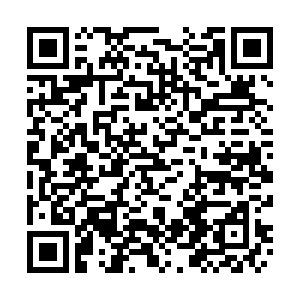 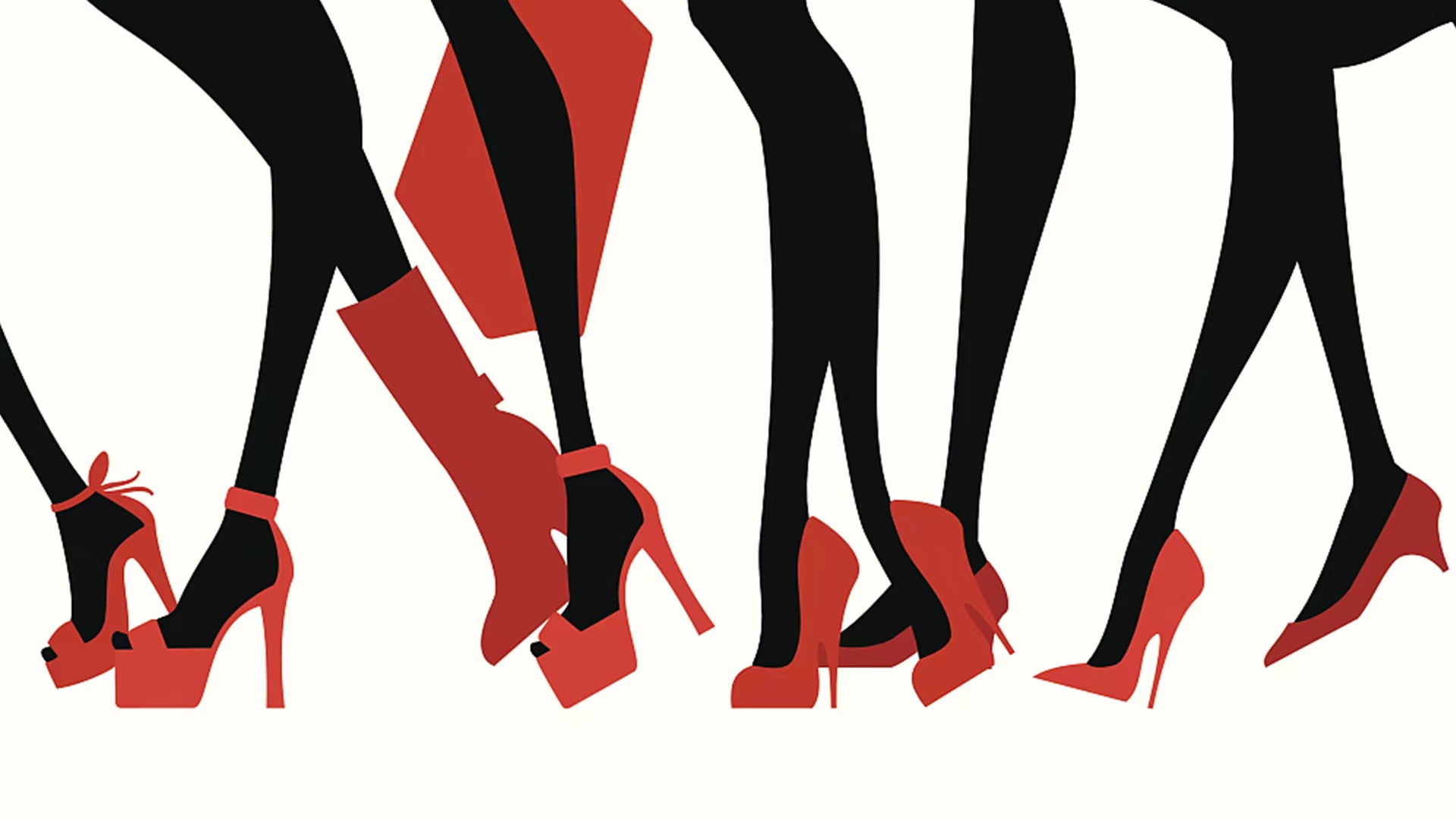 For centuries after the end of the Middle Ages, high heels were an emblem of power and aristocracy in Europe. Fast forward a couple hundred years, the Industrial Revolution and ensuing social transformations brought high heels into common thoroughfare. They became all the rage during the Gilded Age in the U.S. They subsequently survived both world wars, the counterculture movement, as well as rapidly evolving fashion trends.

For the past decades, heels have been a staple in women's wardrobes, especially since stilettos, featuring a slender heel of strength, became a fad during the economic boom of the 1950s. Named after a thin Italian dagger, stilettos could make a woman look slimmer and curvier, a desirable female image at the time. Haute couture posters featuring silhouettes of female models in groovy dresses and killer heels were ubiquitous. Towering high heels were even embraced by many designers as part of power dressing in the yuppie era of the '80s.

Pumps in the modern sense were introduced into China in the early 1990s and gained cult status among actresses and socialites in Shanghai. In a few classic films, they left an unforgettable trail.

During the following decades of material scarcity, high heels were a luxury. "When I was 11, I stealthily tried on my 21-year-old sister's high heels which her husband bought her when they got married. They were black, instep-strap leather heels," You Yehui recalled. Born in 1948 in southwest China's Guizhou Province, she had been a tailor since she was 15 years old, before her retirement in the early '90s. When she was working, only on very formal occasions like meetings would she wear a pair of heavy block heels. "Cloth flats, made of corduroy or penne velvet, were our footwear all day."

Heels staged a comeback in the '80s, when the country's economy edged up after the reform and opening up in the late 1970s. You's daughter Celia Cui was quite fashion conscious in her 20s during that period. "I always wore high heels because they were a marker of fashion."

For girls growing up in the '80s and '90s, donning a pair of high heels was one of the many symbols of female adulthood. "I'd even build a heel instead of a snowman when it snowed," said Han Li, who now works in marketing at a law firm in Beijing. She had started wearing block heels occasionally in high school and has long grown used to stilettos upon entering the workforce 10 years ago. 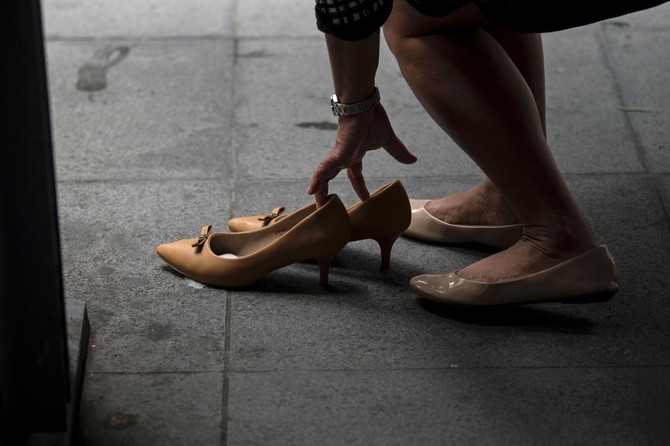 An office worker changes her footwear from high-heeled to flat shoes outside her office building in Makati, Manila's financial district. /AFP

An office worker changes her footwear from high-heeled to flat shoes outside her office building in Makati, Manila's financial district. /AFP

But as time went on, their preferences changed, gravitating toward more utilitarian, comfortable flats, including ballet flats, boots, sneakers, oxfords, and loafers.

During last year's Single's Day shopping spree in China, the world's biggest online shopping event, Dr. Martens and UGG topped the sales list of women's footwear. In contrast, Daphne – a Hong-Kong-headquartered company that once dominated the domestic market of women's shoes – reported a drop of 83 percent in its revenue in 2020 and closed all brick-and-mortar stores. Its online sales revenue was also lackluster, down by 77 percent in the first half of 2021 year on year. Earlier this month, another shoe brand familiar to China's female adults, ST&SAT, reported its biggest loss last year since it went public in 2009.

In the meantime, high-end designer brands sensed the rise of sneakers, which had been banned from the runway only years ago, and developed their own sports footwear. Gucci, Prada and Balenciaga are increasingly looking to sneakers for growth, according to a 2018 Reuters report. Christian Louboutin put crystal-embellished sneakers on the market, while Roger Vivier launched its first running shoes with its iconic square buckles, the Viv' Run, in 2018. Jimmy Choo, known for its red-carpet-ready, sky-high stilettos, started collaborating with Timberland in a six-inch, crystal-encrusted boot collection in 2020.

For formal occasions, block-heeled slingbacks and kitten heels have been among the favorites for ease and elegance. 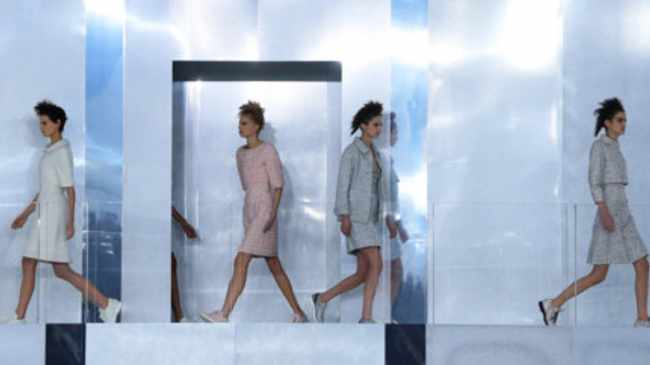 Karl Lagerfeld sends models down the catwalk in couture and sneakers for his SS14 Chanel Couture show in Paris. /Reuters

Karl Lagerfeld sends models down the catwalk in couture and sneakers for his SS14 Chanel Couture show in Paris. /Reuters

Certain literary works described women in high heels as "sexy" and "feminine" while others argued they bogged women down in the trap of stereotyped femininity. Christian Louboutin, the Parisian fashion designer of the eponymous red-soled stiletto brand, famously said, "The core of my work is dedicated not to pleasing women but to pleasing men."

Yet these attitudes are changing, accelerated by the shift to remote work due to the pandemic. However, this trend toward flats very much predated the global outbreak. In the past women were told they had to suffer to be beautiful. Now they prefer shoes that they can wear to run, without restraints. It echoes a free spirit and independence from a notion of beauty defined by men.

Han Li still loves high heels. "I wear heels a lot because I often go out to meet clients and I want to look formal and show respect, though my workplace doesn't have dress codes." For her, walking gently in a pair of delicate pumps is something that brings her joy. "Beautiful things bring me a sense of delight, overwhelming the discomfort and fatigue of wearing them."

Many millennials and Gen Zers are like her, seeking a balance between comfort, formality, and aesthetics while pleasing themselves.

"Wearing stilettos may render a confident and elegant look but I choose not to be too hard on myself," said 26-year-old Mo Mo. Unless driving to work occasionally, she'd never don heels because walking through a crowded subway in the morning is a recipe for disaster.

Celia, now an executive at a pharmaceutical company, increasingly embraced low heels and athletic shoes after she turned 40. "With a faster pace of life, especially office life, I have little time to go to gym so I usually use part of my commute to walk. Then I need a pair of comfortable shoes." She observes that most of her younger female colleagues also wear heels less over the past years. "It indicates that women today are more confident and assertive when it comes to choosing what to wear." 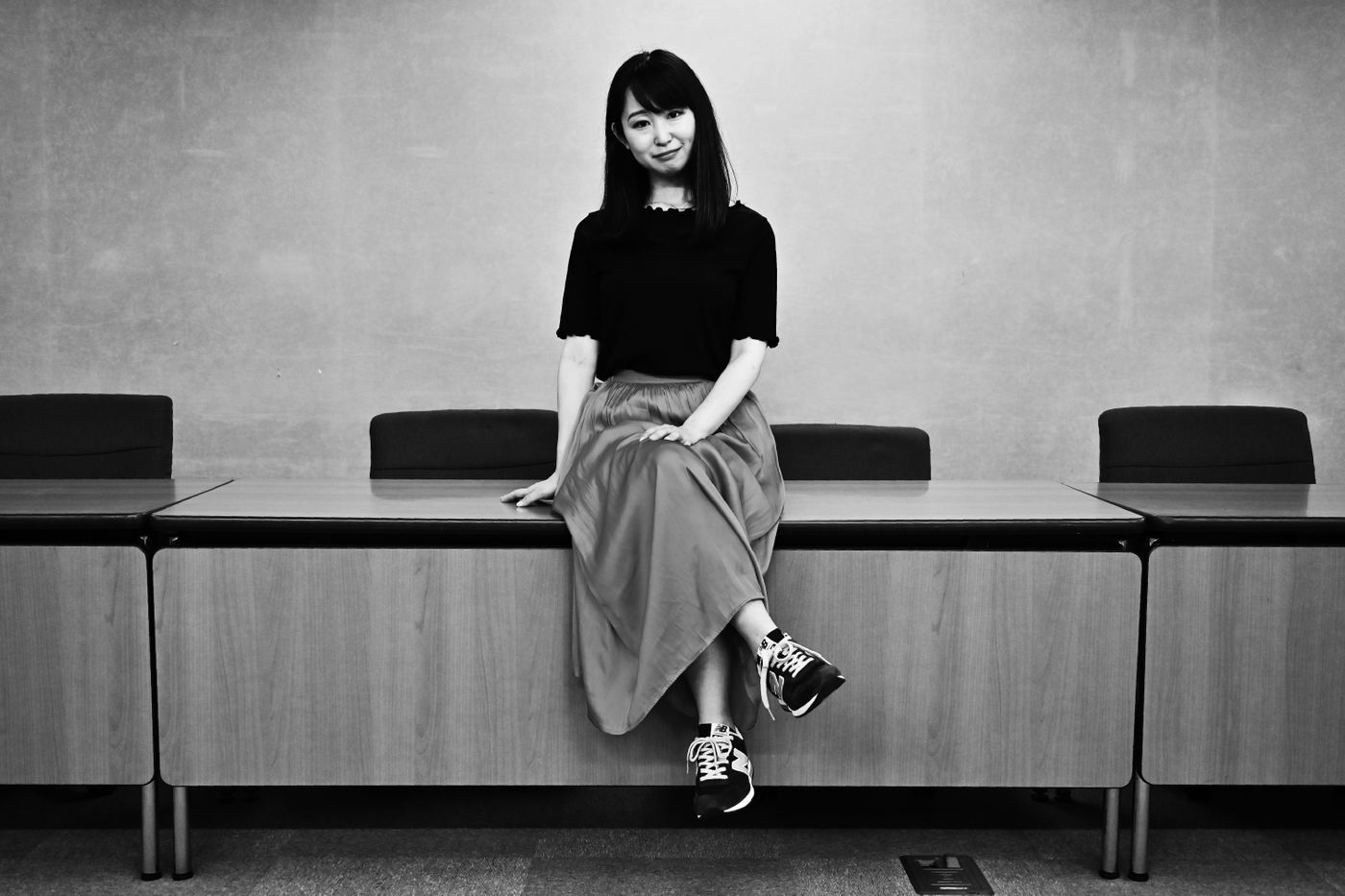 Actress-writer Yumi Ishikawa, who launched Japan's anti-high heels movement, poses for a photo in a pair of trainers. In Japan, women reported being discriminated against if they don't wear high heels in the workplace. /AFP

Actress-writer Yumi Ishikawa, who launched Japan's anti-high heels movement, poses for a photo in a pair of trainers. In Japan, women reported being discriminated against if they don't wear high heels in the workplace. /AFP

While Chinese women turning to flats speaks to the wider trend of females breaking gender norms, it's also part of a global shift.

The sales of trainers surpassed that of high heels for the first time in the UK in 2016. High heel sales slumped by 45 percent in 2020, according to American market researcher NPD Group. Growth ahead may wobble, as more women choose to cling to comfortable flats instead of painful high heels that, well, wobble.

Actresses are also joining heel naysayers by speaking out against the Cannes Film Festival's no-flats rule. In Japan, a KuToo movement was started in 2019. A pun playing on Japanese words "kutsu" which means "shoes" and "kutsuu" for "pain," the movement protests the rigorous policy of mandatory high heels in the workplace.

Du Yun, 33, dreamed of a pair of stilettos in her teens and often tried on her mother's heels at home. In her early years at work, she often wore a pair of stilettos like other female colleagues. "My feet really hurt. But to look taller, I chose to suffer."

But now she has shelved those stilettos and never bought shoes with heels of more than three centimeters. "Walking in thin heels makes quite a noise on wood floors so that I'd refrain from walking around. What's more, they make me fall easily. Once in a crowded subway car, I tumbled over after a jolt and stepped on the foot of the passenger behind me. I was very embarrassed."

(Interviewees were given pseudonyms at their request except You Yehui and Celia Cui.)