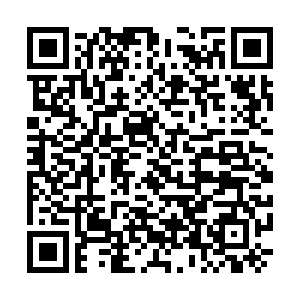 China's State Council Information Office on Monday issued the Report on Human Rights Violations in the United States in 2021.

The report said the human rights situation in the United States, which has notorious records, worsened in 2021. Its political manipulation led to a sharp surge in COVID-19 deaths while shooting deaths in the country hit a new record.

Fake democracy trampled on people's political rights and violent law enforcement made life harder for migrants and refugees in the United States, it said.

The entrenched violent thinking of the United States has threatened lives of its people, according to a report.

The report noted that deterioration of social order has accelerated the proliferation of guns in the United States.

The United States is the country with the largest number of privately owned guns in the world. The U.S. public have lost confidence in the government's social security governance and felt extremely insecure, which drives many to purchase guns to protect themselves, it added.

The country's gun violence seriously endangers people's lives. The United States has the worst gun violence in the world, said the report. 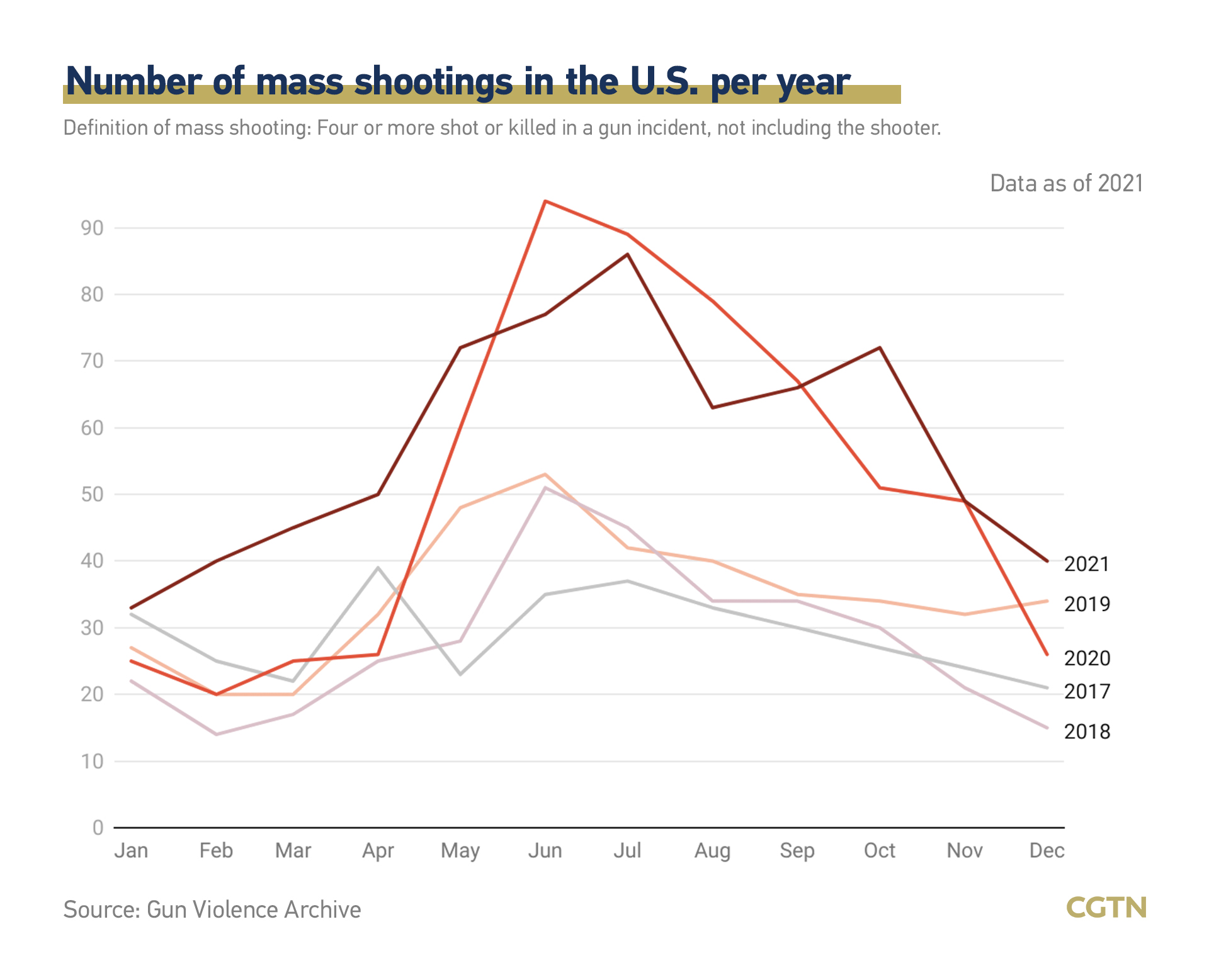 Meanwhile, police brutality tramples human life. According to data compiled by Mapping Police Violence, at least 1,124 people died in 2021 due to U.S. police violence, according to the report.

The report pointed out that human rights violations by prison staff are commonplace in the United States and the credibility of its judicial system is in tatters.

CTV News reported on November 14, 2021 that since 2019, more than 100 U.S. federal prison staff members have been arrested and convicted of sexual abuse, murder and other offenses, said the report.

The United States is playing with fake democracy, which has resulted in trampling on political rights, said the report

The American-style democracy has descended to a game of transferring interests. Money politics has become increasingly rampant in the United States, which makes politicians more neglectful of people's interests and demands, according to the report. 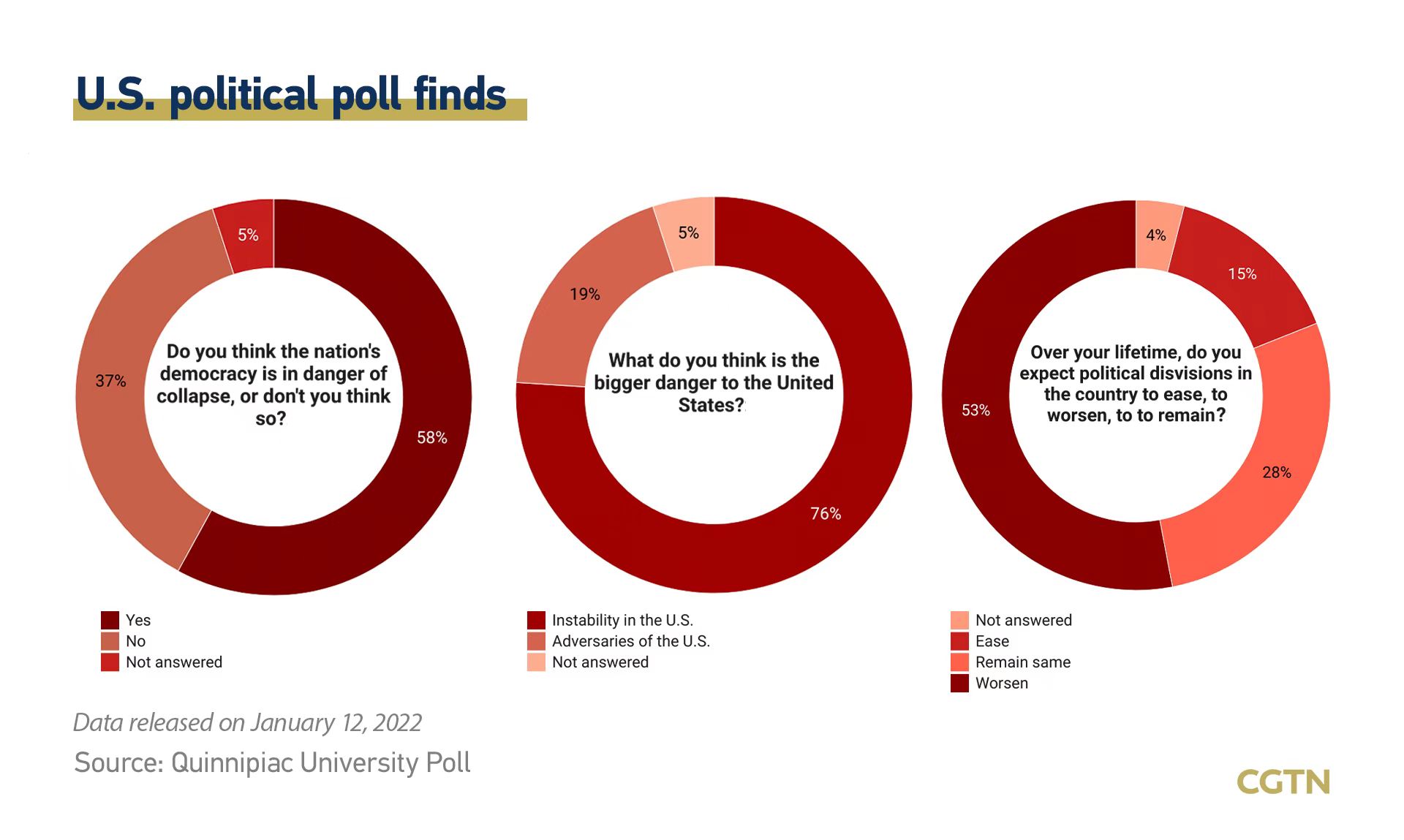 It added confrontations between political parties restrain and harm electors' right to vote.

The report said the "virus" of deeply-entrenched racism in the United States is spreading along with the coronavirus.

Racism has led to an even widening racial economic divide and growing racial inequality, according to the report. 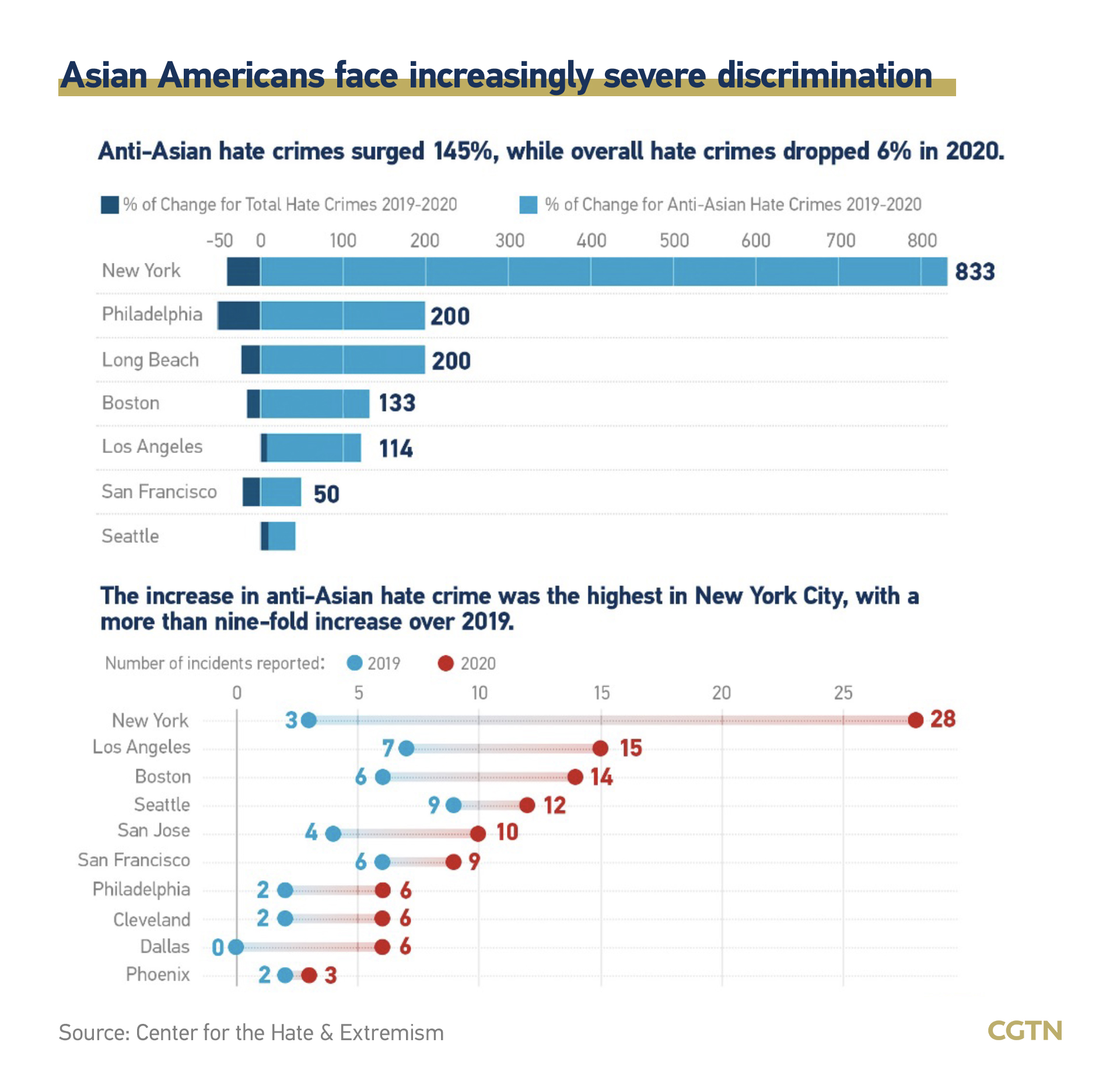 Statistics released by the New York Police Department on December 8, 2021 showed that anti-Asian hate crimes in the city rose by 361 percent from that of 2020.

The report also noted the aborigines have long suffered cruel racial persecution. The United States has a long and dark history of violating the rights of indigenous people, including Indians, who have experienced bloody massacres, brutal expulsions and cultural genocide.

The economic divide between races continues to widen, and structural flaws in its system have led to increasing racial inequality in the United States, it said.

The United States abused force and sanctions, violating human rights in other countries, according to the report.

The U.S. has always pursued hegemonism, unilateralism and interventionism. The country frequently used force, resulting in a large number of civilian casualties, said the report.

The U.S. war on terror has killed millions of people. Since the 21st century, the United States has launched a series of global foreign military operations in the name of anti-terrorism, resulting in nearly one million deaths. 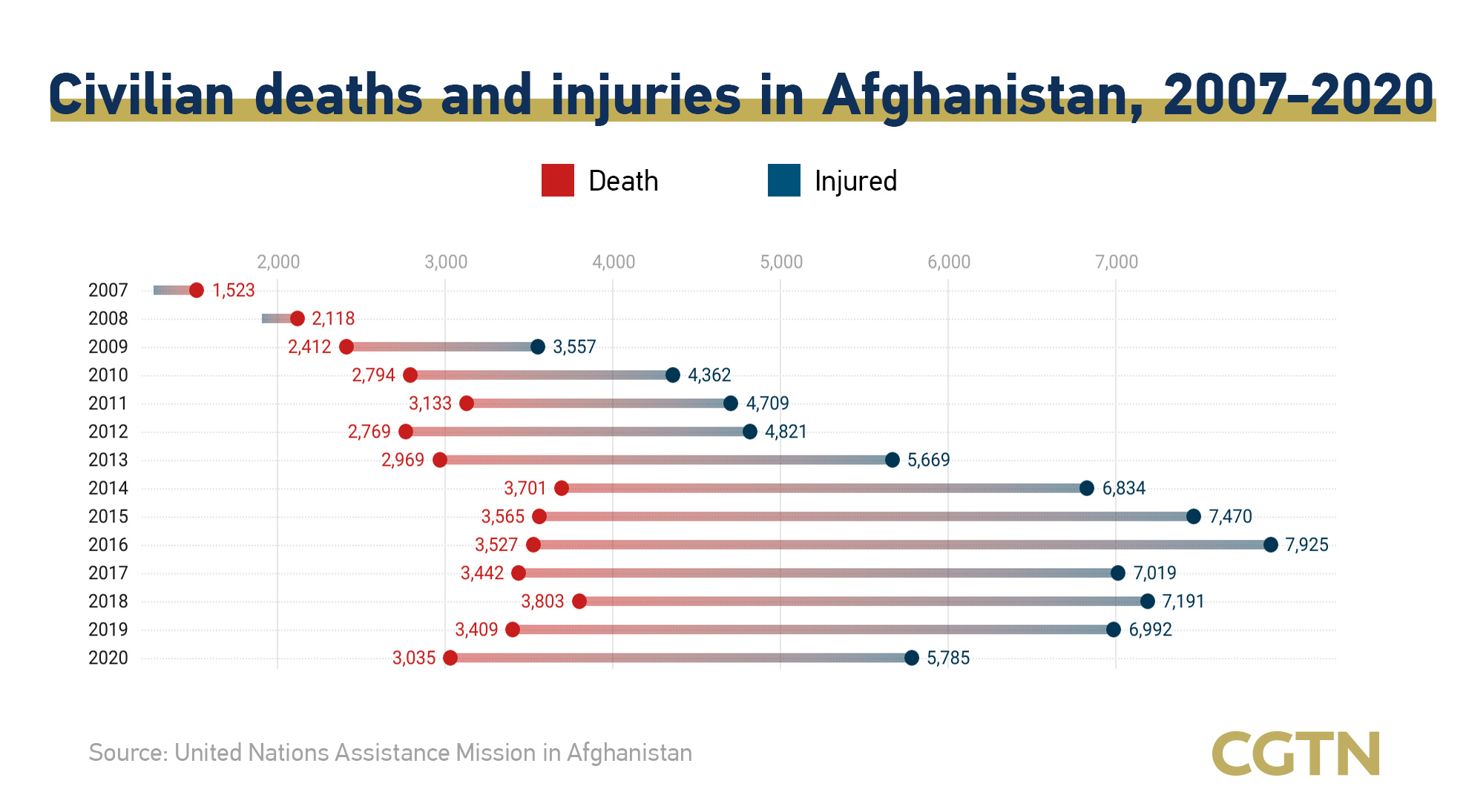 According to the "costs of war" study by Watson Institute for International and Public Affairs of Brown University, the so-called anti-terrorism war launched by the United States in the past 20 years has claimed the lives of more than 929,000 people. The 20-year U.S. military operations in Afghanistan have killed 174,000 people, including more than 30,000 civilians, and injured more than 60,000 people.

Noting that the Guantanamo Bay prison has been the scene of repeated torture scandals, the report said the independent panel of experts on human rights appointed by the UN Human Rights Council issued a statement on Jan. 10, 2022, saying that two decades of practicing arbitrary detention without trial accompanied by torture or ill treatment violates international human right laws, and is "a stain on the U.S. Government's commitment to the rule of law."

Despite having the world's most advanced medical equipment and technology, the United States has the biggest number of COVID-19 infections and deaths globally, it said. 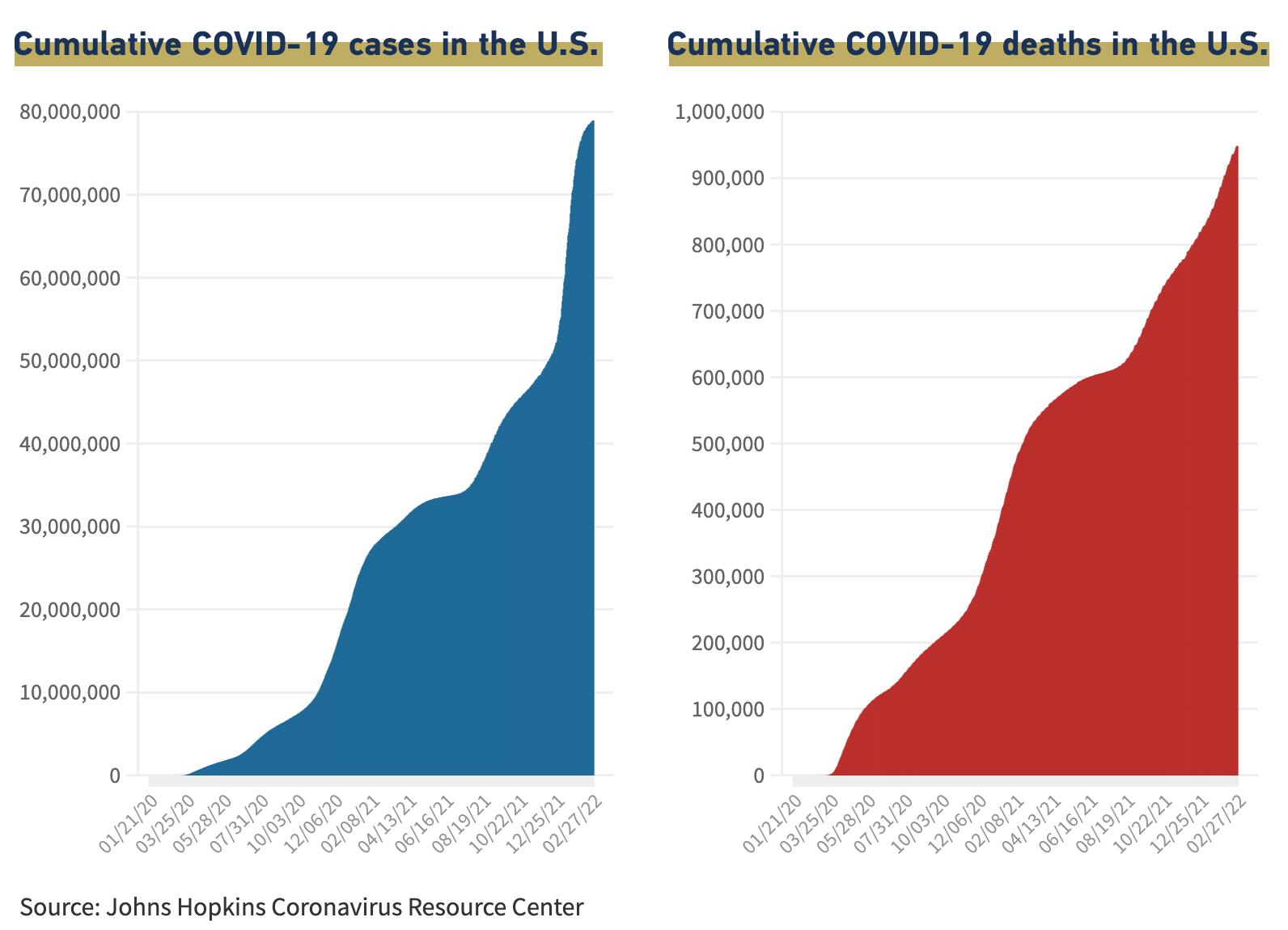 The report noted that the U.S. government stoked the tracing of the origins of COVID-19, and has been keen on passing the buck, shifting the blame, and political manipulation.

The United States has disregarded its people's rights to life and health, said the report.

Since the outbreak of COVID-19, the epidemic prevention and control in the United States has become a tool and a bargaining chip for Republicans and Democrats to attack, reject and confront each other, it added.

According to data from Johns Hopkins University, by late February 2022, the number of confirmed COVID-19 cases in the United States had exceeded 78 million and the death toll surpassed 940,000. Its number of COVID-19 deaths recorded in 2021 has far surpassed the total for 2020.

Meanwhile, the mental health of U.S. people has deteriorated due to the uncontrolled outbreak. The country has logged a staggering number of the homeless and the elderly' rights to life have been flagrantly violated, the report noted.

The United States creates migrant crisis against humanity, although the U.S. government has often interfered in other countries' internal affairs by wielding the club of "human rights," the report said.

U.S. policy of separating migrant children from their families has severely endangered the migrants' lives, dignity, freedom and other human rights, according to the report. 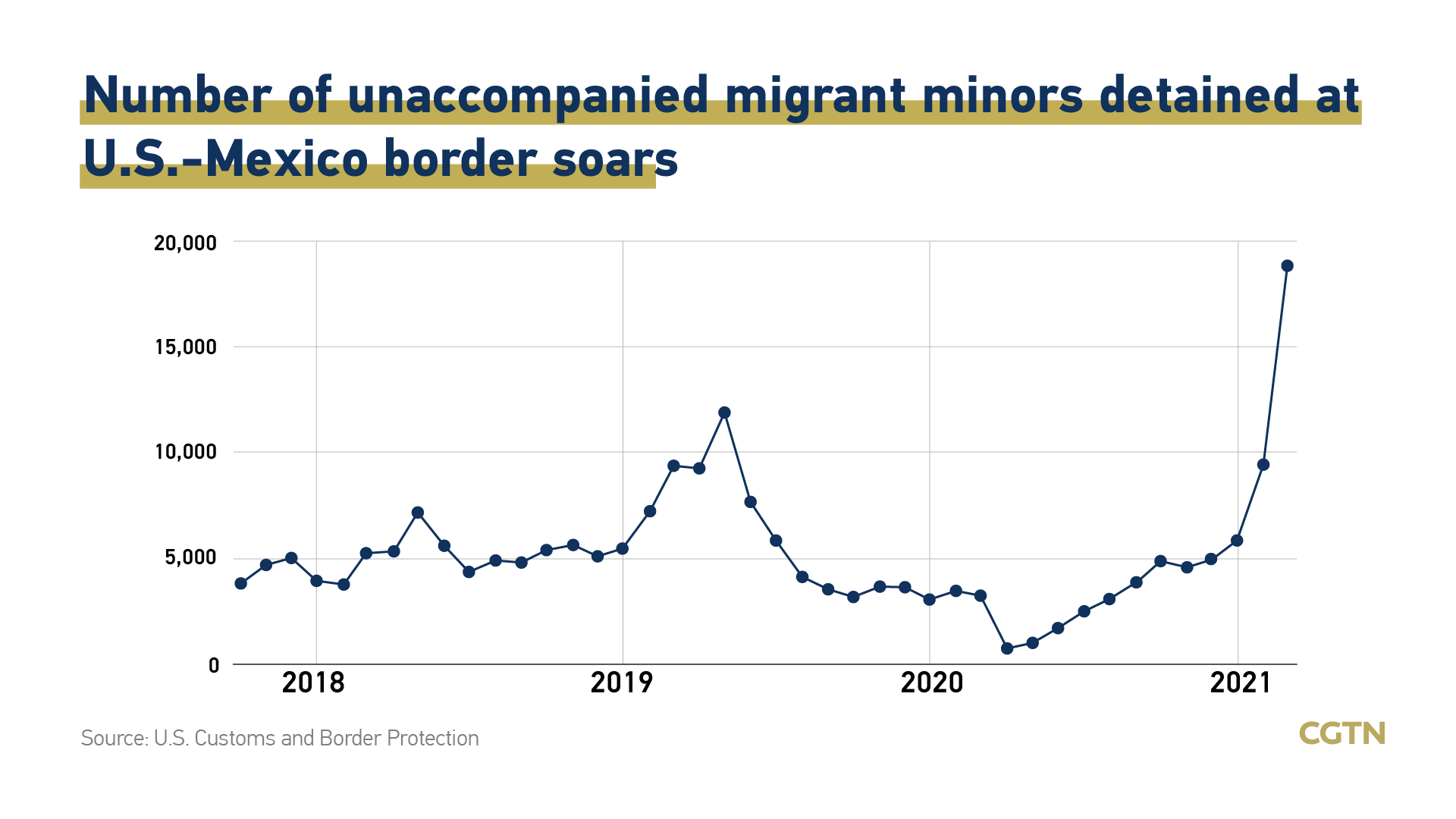 The report pointed out that asylum seekers are subject to police brutality, and immigrant children face prolonged detention and abuse in the United States.

U.S. authorities detained more than 1.7 million migrants along the Mexico border during the 2021 fiscal year that ended in September. Among them, up to 80 percent are held in private detention facilities, including 45,000 children.

(Cover: A demonstrator holds up a sign during a protest in Uptown neighborhood of Chicago, U.S., June 1, 2020. /Xinhua)