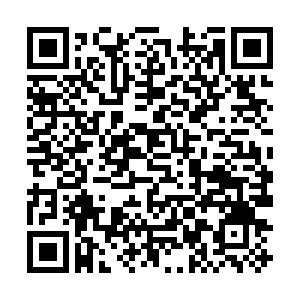 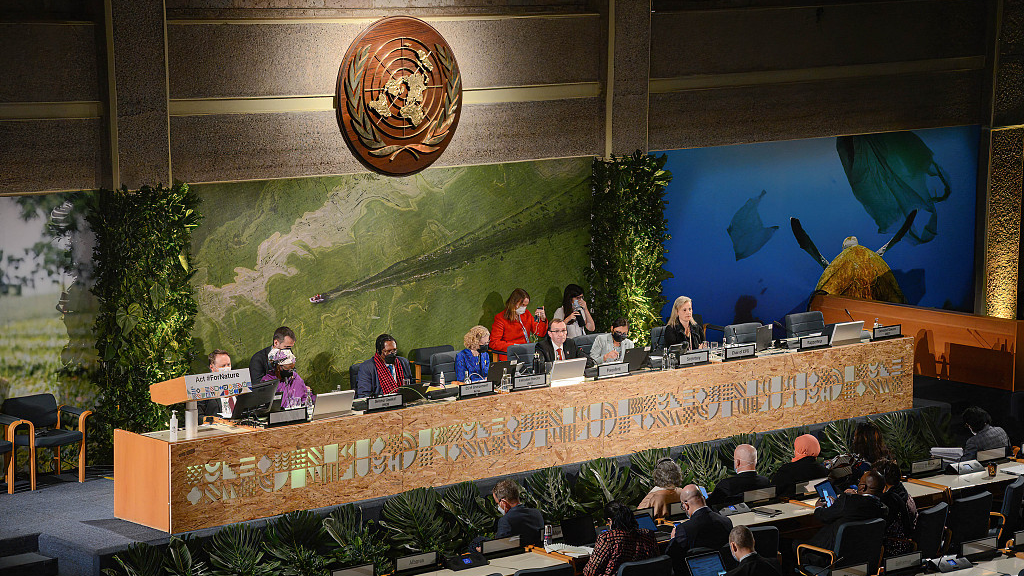 The fifth session of the UN Environment Assembly in Nairobi, Kenya, February 28, 2022. /VCG

The fifth session of the UN Environment Assembly in Nairobi, Kenya, February 28, 2022. /VCG

There is a good reason that the United Nations Environment Program (UNEP) is headquartered in the developing country of Kenya. The 193-member state organization was started with the aim of giving leadership through mobilizing the necessary resources in tackling environmental challenges facing mankind.

Developing countries are basically more vulnerable to global problems than the developed because of their comparatively weak socio-economic structures. Kenya serves as an ideal testing ground for the development and implementation of solutions in circumstances that require testing resilience of the world in withstanding environment shocks.

Whether and how the UNEP has achieved its milestones is a major agenda item in the fifth session of the UN Environment Assembly (UNEA) in Nairobi from February 28 to March 2, as a celebration marking UNEP's 50th anniversary. The UNEA will also be refreshing its mandate and increasing the impetus in addressing the triple existential threats of the 21st century — climate change, nature and biodiversity loss, and pollution and waste.

In human terms, 50 years old is an age for reflection and realignment with an unknown future. It is a milestone that one pauses to take audit of his or her strengths, weaknesses, threats and opportunities. This is the kind of both challenge and opportunity that the UNEP faces.

The UNEP is arguably one of the most critical UN bodies for its overarching role in human development. Nature is the common denominator of human existence and progress. But nature reacts according to how it is treated. This was aptly captured by the 2004 Nobel Peace Prize winner Wangari Maathai, a renowned Kenyan environmentalist, who said the famous words, "Mother Nature is very generous but very unforgiving."

It is a case of garbage in, garbage out. We reap whatever we invest in the environment. Unfortunately, the UNEP does not have the power to legally or constitutionally intervene in the myriad cases of global wanton environmental destruction. It can only advocate through resolutions that are not binding unless they are domiciled in national legislations.

One of the heated debates during the UNEA's first plenary on Monday was the need to drastically reduce the use of plastics and eventually eradicate their use. In the meantime, recycling would reduce their footprint particularly in bodies of water, where environmentalists say that they have become an overwhelming pollutant. 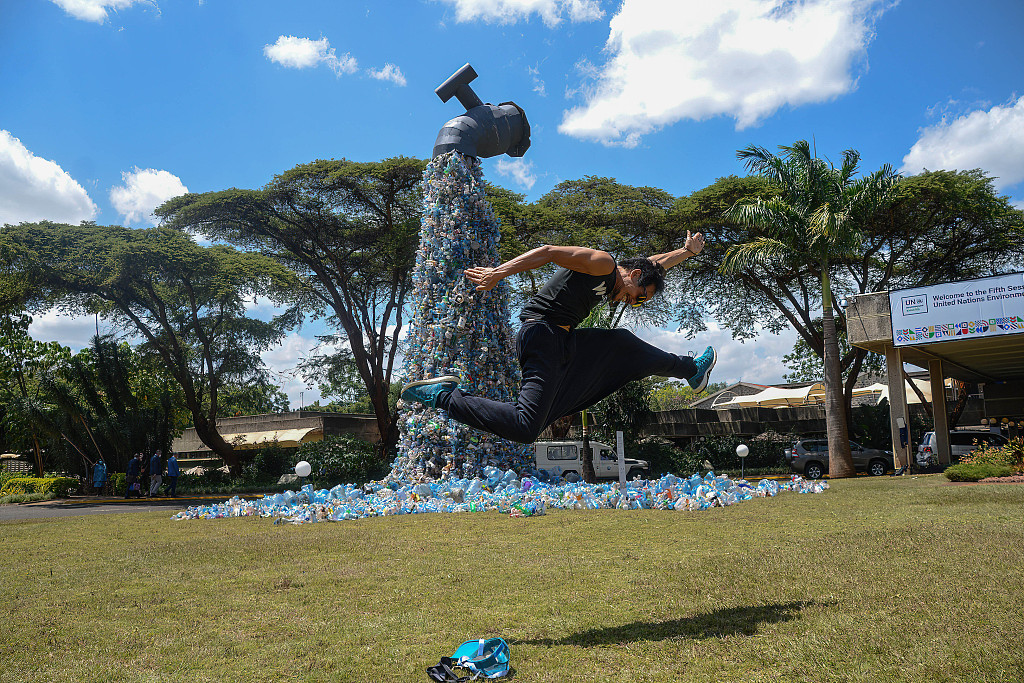 Canadian activist and artist Benjamin von Wong performs a stunt next to his 30-foot high monument titled "Turn off the Plastics Tap" at the United Nations in Nairobi, Kenya, during day one of the fifth session of the UN Environment Assembly, February 28, 2022. /VCG

Canadian activist and artist Benjamin von Wong performs a stunt next to his 30-foot high monument titled "Turn off the Plastics Tap" at the United Nations in Nairobi, Kenya, during day one of the fifth session of the UN Environment Assembly, February 28, 2022. /VCG

This is also an opportunity for environmentalists and industries to jointly devise creative ways of mainstreaming the circular economy. In many developing economies, waste from upmarket areas is usually recycled into utility products for the low income areas. The thinking here is that one man's meat is another man's poison.

In the same category with the foregoing concept is China's "ecological civilization" program, which promotes a system of interdependence, with parts of the ecosystem adding value to each other. Through this symbiotic relationship, ecosystems will sustain themselves in perpetuity. In the larger context, ecological civilization incorporates the fight against climate change and push toward green energy among other aspects that can usher in a new environmental dispensation for humanity.

While the UNEP has done a lot, it needs to do more to stay ahead of the vagaries of nature. It can take the cue from the World Health Organization's (WHO) successful two-year leadership in the spirited fight against the COVID-19 pandemic. The WHO mobilized the world in fighting a common albeit invisible enemy, an initiative whose results have met success as the pandemic becomes gradually subdued in many regions.

An issue like climate change needs such urgency as the world seeks to stem the increase of temperatures below the catastrophic 1.5 degrees, beyond which the Earth will become inhabitable. Such a campaign needs the zealousness and dexterity of a captain navigating a treasure-carrying sinking ship.

Luckily, in regards to the environment, the UNEP does not need to spend a lot of time and energy preaching to the converted. The majority of people in the world are now conversant with the effects of environmental degradation due to changing weather patterns, which has destroyed natural assets and livelihoods.

Of the essence going forward is action and commitment by all players in the whole gamut of the environment sector. This includes closing the massive budgetary shortfall. According to the UNEP's "State of Finance for Nature" report released on May 27, 2021, the world needs to close a $4.1 trillion financing gap in nature by 2050 to succeed in achieving climate change, biodiversity, and land degradation targets.

That is a steep budget indeed, which calls for a reprioritization and reallocation of the world's resources away from wasteful and destructive pursuits like the arms race. It is a call of the rich and powerful countries, who must act as custodians for life on Earth.