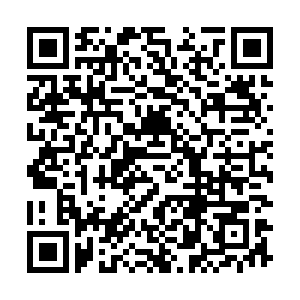 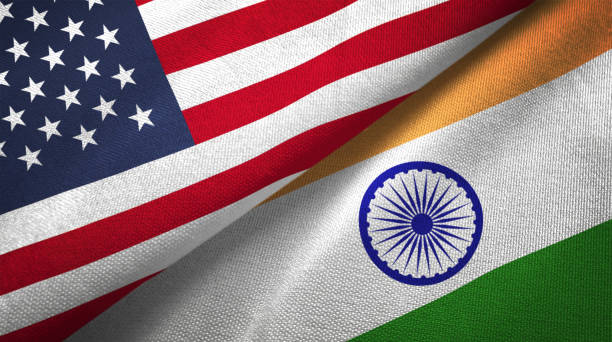 The U.S. is in a tricky situation on whether to apply or waive sanctions on India, one of its key strategic partners and Quad member, after the South Asian country on Wednesday abstained from a UN resolution deploring Russia's military operation in Ukraine.

It was the third time that India had abstained from U.S.-backed votes against Russia in the past week.

India has its reasons for not taking sides in the ongoing Russia-Ukraine conflict. The South Asian nation is among the few countries that maintains strategic bilateral ties with both Moscow and Washington. Besides being a Quad member, India also shares a place with Russia in BRICS, a multilateral bloc of emerging economies, and the Shanghai Cooperation Organization (SCO) that brings together a number of Eurasian nations.

India also happens to be the largest importer of Russian defense hardware. The U.S. is required to impose sanctions on any country that has significant transactions with Russia, Iran, or the Democratic People's Republic of Korea (DPRK) under Washington's tough domestic law known as the Countering America's Adversaries Through Sanctions Act (CAATSA). The law puts the U.S. in a bind when it comes to India.

While the U.S. has waived CAATSA sanctions on India in the past, this time such a waiver isn't certain due to U.S. President Joe Biden's resolute stance on Russian military operations in Ukraine.

"I can assure you that the administration will follow the CAATSA law and fully implement that law and will consult with Congress as we move forward with any of them," Donald Lu, Assistant Secretary of State for South and Central Asia on Wednesday told members of the Senate Foreign Relations Subcommittee on the Near East, South Asia, Central Asia, and Counter-terrorism, responding to a question on possible CAATSA sanctions on India. 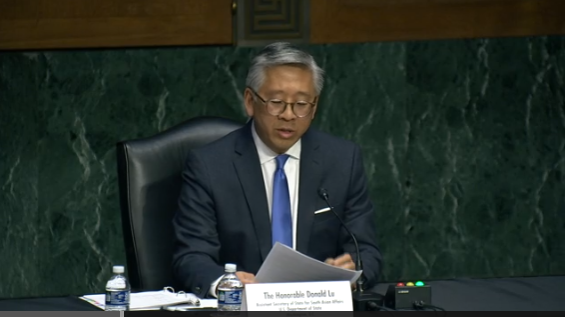 "What unfortunately I am not able to say is to prejudge the decisions of the President or the (Secretary of State) on the waiver issue or on the sanctions issue, or whether Russia's invasion of Ukraine will bear on that decision," he said, adding that the Biden administration is yet to decide on applying sanctions on India under CAATSA.

"India is a really important security partner of ours now. And that we value moving forward that partnership and I hope that part of what happens with the extreme criticism that Russia has faced is that India will find it's now time to further distances," said the senior American diplomat.

Russia has traditionally been one of India's key weapons suppliers. India signed a $5-billion deal with Russia in October 2018 to purchase five units of S-400 air defense missile systems, despite the then Trump administration threatening New Delhi with CAATSA sanctions.

The U.S. has imposed CAATSA sanctions on its NATO partner Turkey for buying S-400 missile defense systems. However, the sanctions have so far not been imposed on India.

Emphasizing that it will be very hard for any country, including India, to buy major weapons systems from Russia in the future following the sweeping sanctions imposed on Russian banks, Lu said: "What we've seen from India in just the last few weeks, is the cancellation of MiG 29 orders, Russian helicopter orders and anti-tank weapon orders."

On being asked about India-Russia defense partnership, Lu said: "We're in (the) process of trying to understand whether defense tech that we are sharing with India can be adequately safeguarded, given India's historical relationship with Russia and its defense sales." 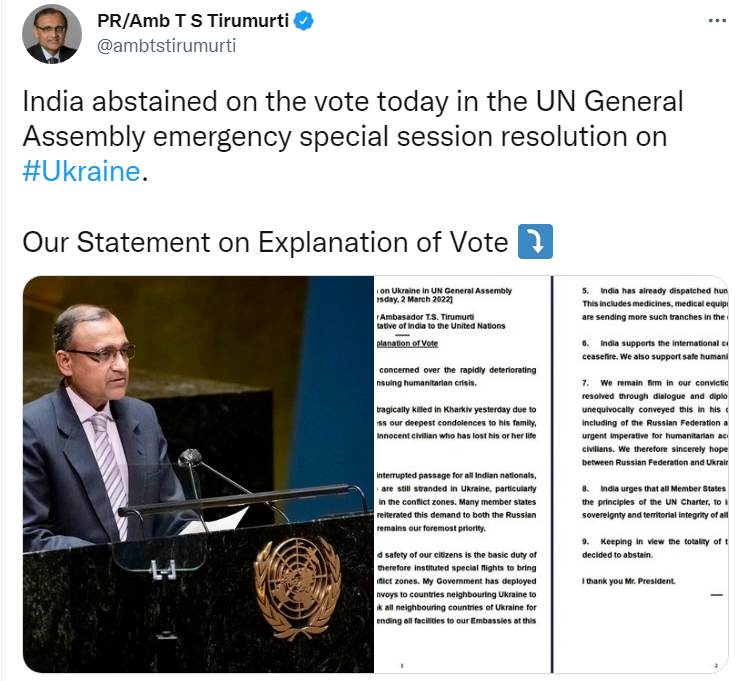 A screenshot of the tweet by T S Tirumurti, India's permanent representative at the United Nations, announcing his country's decision to abstain in the UN General Assembly's resolution against Russia, UNHQ, New York, U.S. /Twitter @ambtstirumurti

A screenshot of the tweet by T S Tirumurti, India's permanent representative at the United Nations, announcing his country's decision to abstain in the UN General Assembly's resolution against Russia, UNHQ, New York, U.S. /Twitter @ambtstirumurti

Lu's remarks came as U.S. lawmakers expressed bipartisan criticism of India for choosing to repeatedly abstain from UN votes against Russia in the past week, the last on Wednesday.

The 193-member UN General Assembly in New York on Wednesday adopted a resolution condemning Russia for the violence in Ukraine and demanded an immediate withdrawal of Russian troops from Ukraine. The resolution was adopted by an overwhelming 141 votes in favor, five against and 35 abstentions, including by India and China. It required a two-third majority to be adopted.

Expressing Washington's frustration over India's abstentions, Lu said: "Let me say that all of us have been working to urge India to take a clear position, a position opposed to Russia's actions. But what have we seen so far? We have seen a number of abstentions."

Meanwhile, according to Indian media reports, New Delhi is already preparing itself to hedge from the impact of the stringent U.S. and Western sanctions against Russia.

New Delhi-based Business Standard on Thursday reported that the Indian government may soon allow bilateral trade between Russia and India in their national currencies – rupee and ruble – to avoid trade disruptions caused by the sanctions. 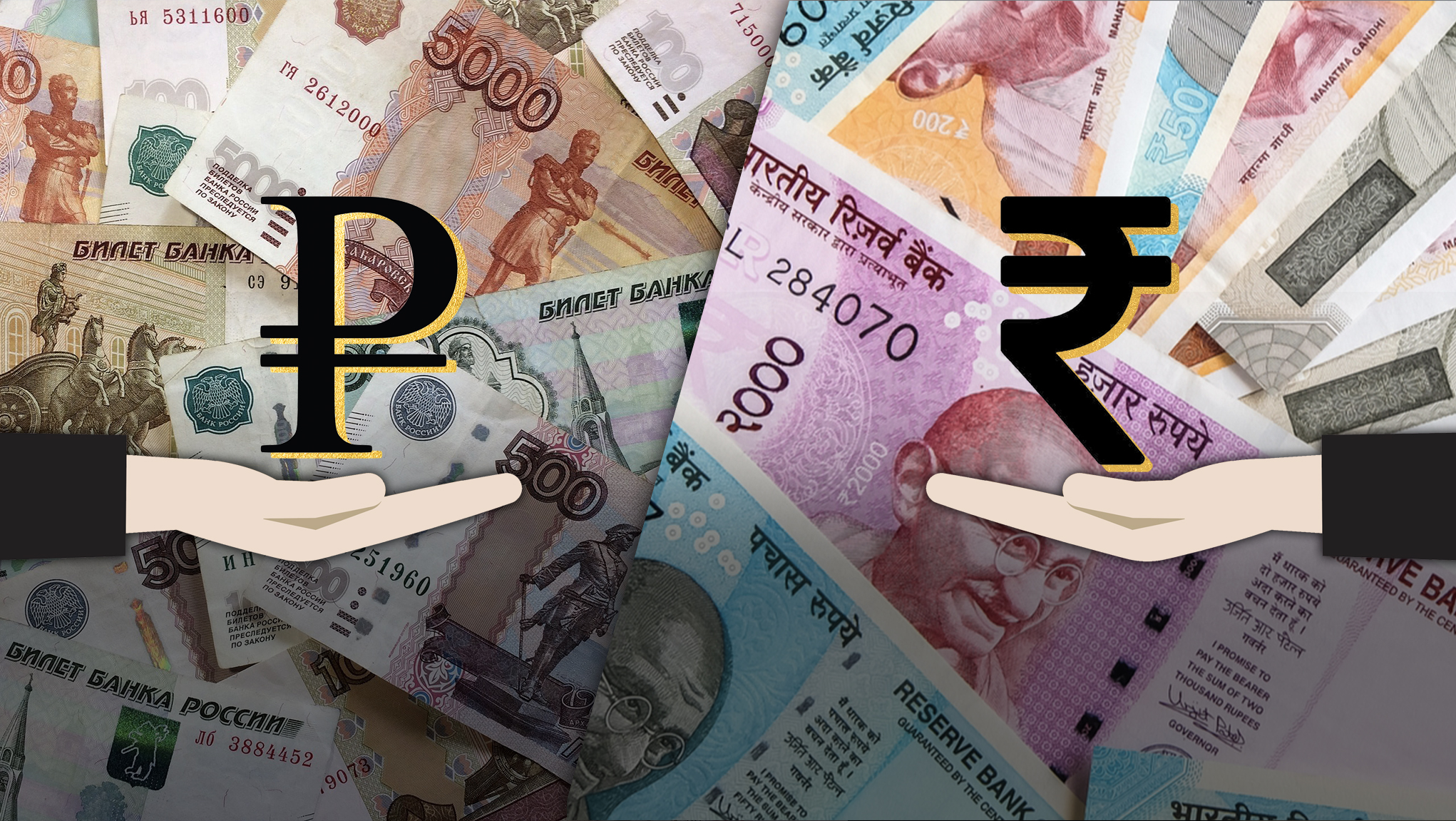 While India's Department of Commerce has recommended the proposal, an announcement is likely to be made by the finance ministry after further deliberations between the Department of Economic Affairs and Department of Financial Services, the newspaper reported.

"The finance ministry will take a call on how to peg the two currencies," it said, quoting an unnamed senior government official.

Another Indian news platform, Mint, citing government officials from both the countries, reported that the Reserve Bank of India is exploring alternative mechanisms to process financial transactions involving Russian businesses, including routing payments through smaller Russian banks that haven't been put under sanctions, local currency trade and third-country payments.

Modi is also scheduled to participate in Quad leaders' virtual meeting later on Thursday. The Quad is a strategic security dialogue comprising Australia, India, Japan and the U.S. The Russia-Ukraine conflict is expected to feature prominently in the meeting.