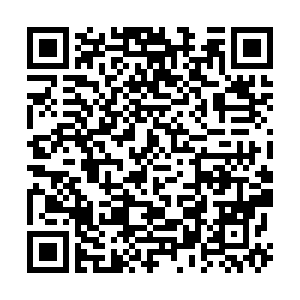 "Good friends, better enemies" was the tagline for the 1996 bout in the WWF between Shawn Michaels and Kevin "Diesel" Nash. The two wrestlers, who were once a tag team, were also famously best friends in real life and as the angle grew, references to this genuine friendship were peppered in, blending the line between fact and fiction.

It's this that makes the storyline so memorable all these decades later, and it's also what makes the very real fight between Colby "Chaos" Covington and Jorge "Gamebred" Masvidal so special as, in the build up, it was unclear just how much of their story was real and how much was to work the crowd.

Early in their careers, Covington and Masvidal were training partners at the American Top Team (ATT) gym but as their careers bloomed – both within the same welterweight division – it became clear they couldn't continue to co-exist as, after all, only one man can be the champion.

Then, seemingly in 2019 judging by the UFC's Countdown YouTube series, they eventually did have a serious falling out and, as always in these situations, neither side can agree on the reason. Jorge's story is very simple: Colby started acting like a big shot after winning the UFC's interim welterweight title and stiffed a coach out of money. To a man as prideful as Jorge Masvidal, cheating a coach is the same as cheating a gym. This story is perhaps confirmed by Colby also publicly falling out with other ATT fighters such as Dustin Poirier and Joanna Jedrzejczyk.

But Colby's story also rings true. He claims it all came down to Demian Maia. Masvidal lost a close split decision to Maia in a title eliminator at UFC 211 on May 13, 2017. Maia went on to fight then-champion Tyron Woodley, Masvidal went on to lose to Stephen Thompson and take an 18-month hiatus from the sport to get his head right. 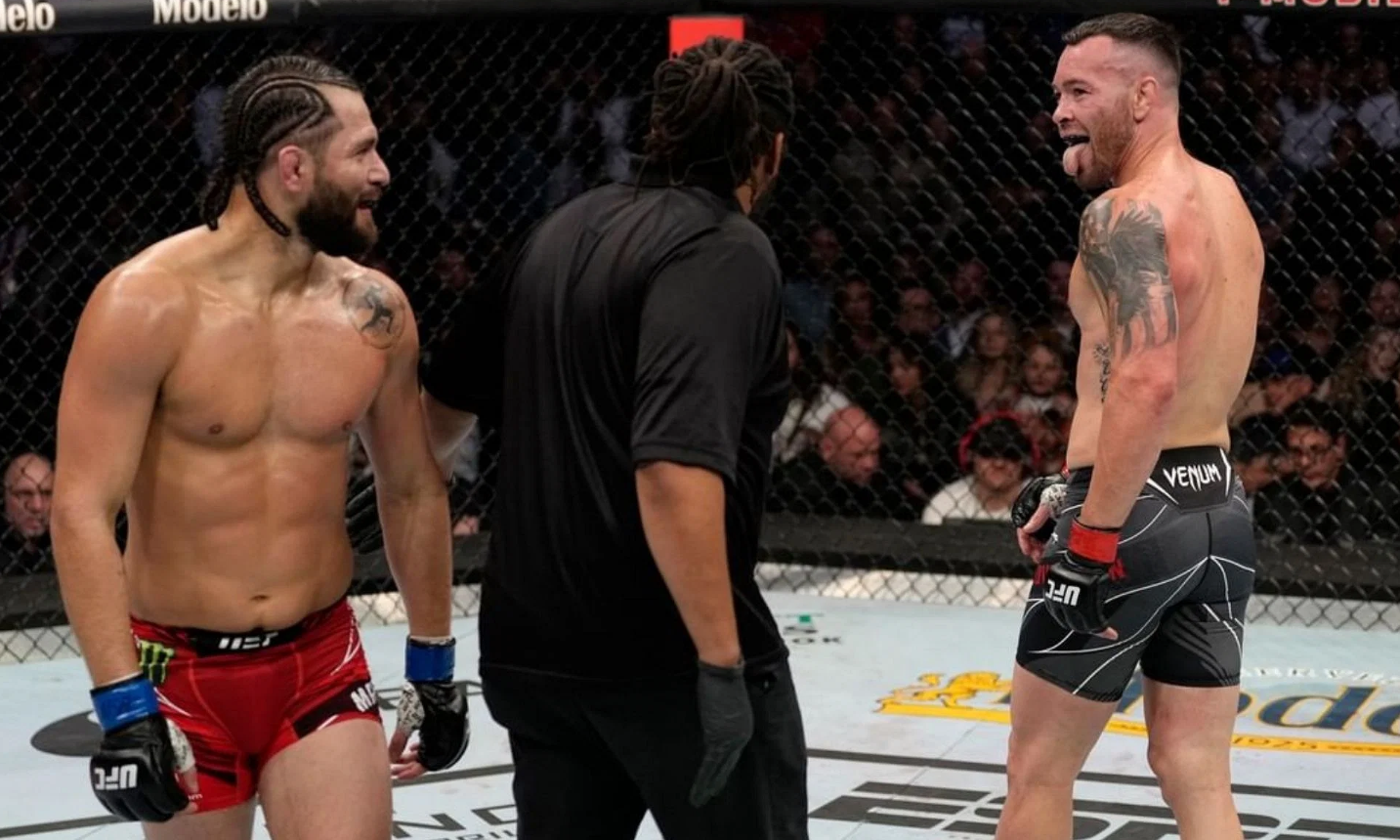 Jorge Masvidal (L) and Colby Covington (R) stare each other down at the end of round 1. /Zuffa

Jorge Masvidal (L) and Colby Covington (R) stare each other down at the end of round 1. /Zuffa

Colby, on the other hand, beat Maia in a one-sided unanimous decision win at UFC Fight Night: Brunson vs. Machida two weeks before Masvidal's loss to Wonderboy and then went on to win the interim UFC welterweight belt by beating Rafael dos Anjos at UFC 225 the next year. He believes Masvidal's aforementioned hiatus was spurred by seeing his former training partner go on to exceed him.

Both sides seem plausible – Colby's more so – but then what makes this feud seem like something from pro-wrestling is that both Covington and Masvidal adopted larger than life personas in 2019: Masvidal capitalized on his sensational three-fight win streak over Darren Till, Ben Askren and Nate Diaz by developing catchphrases and dressing like Scarface. Covington became a full on heel, coming to events in a suit, sunglasses and a MAGA hat and running down his opponents with offensive, rambling Scott Steiner-esque rants. Both of these personas were in full flow during the build up to UFC 272 – Colby even came to the cage to WWE legend Kurt Angle's entrance theme – and it justified the fight's position as the main event, even though there was no title or title contention on the line.

Plus, on paper, as Covington is the younger, stronger, more technically proficient fighter, it should have been obvious he would win; this personal hatred made things more ambiguous. When emotions run high, anything can happen – and it did. 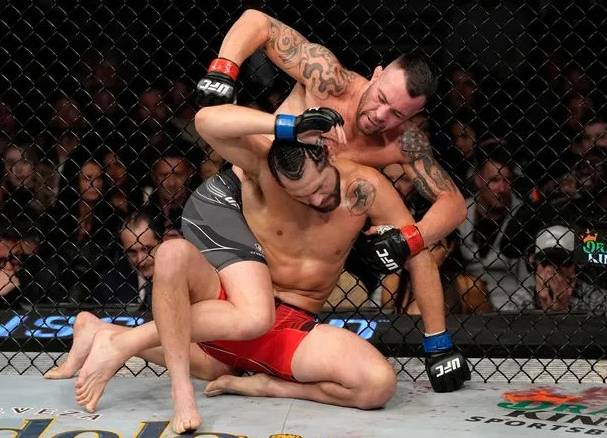 Colby Covington takes Jorge Masvidal's back and attacks from the advantageous position. /Zuffa

Colby Covington takes Jorge Masvidal's back and attacks from the advantageous position. /Zuffa

The first round played out almost exactly as expected. Covington, the NCAA Division I wrestling champion took control of the brawler Masvidal very quickly and got three takedowns, each time holding Masvidal down and working towards choking him out. To Jorge's credit, he had drilled his defensive wrestling extensively and got back to his feet with about a minute to spare.

Then in the second, not only did he stop Colby from ever taking him down, Masvidal comprehensively outstruck his opponent 31 to 20 and even cut him open with a short elbow when coming out of a clinch. It appeared as if the fight would follow the story and the former roommates would bring out the best in each other.

And then round 3 began. Colby ran across the ring, massively shortening the amount of space Masvidal had to work with, and took him to the ground, where the fight stayed for 4 minutes and 34 seconds of the five-minute frame. Colby stayed in top position, sometimes in the mount, always throwing punches and while they didn't all connect fully, they did tire Masvidal out.

With the exception of one powerful counter hook in the fourth round which rocked Colby and got everyone in the T-Mobile Arena on their feet in the belief they were going to see another highlight reel knockout from Gamebred, Masvidal was simply too gassed to deal with the grind of Covington's wrestling. In round 5, he was totally spent – he landed one of only two attempted strikes – and Colby cruised to an unanimous decision win (46-49, 44-50, 45-50).

Post-fight, the two men explicitly did not embrace, did not squash the beef. Security had to hold Masvidal back while Colby gloated and called out Poirier, angling for a big money match later this year by insulting him, his wife and his children. While they may be playing characters on the microphone, one thing was made clear: the feud was not a work, Colby Covington and Jorge Masvidal truly hate each other, and they probably always will.

[Header: Colby Covington poses with the American flag following his win in the welterweight main event of UFC 272 against Jorge Masvidal at the T-Mobile Arena in Las Vegas, Nevada, U.S., March 6, 2022. /Zuffa]