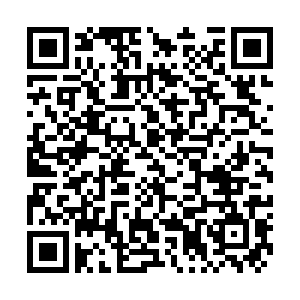 China's producer prices in February rose at the slowest pace in eight months, but skyrocketing global oil and gas prices in response to the Russia-Ukraine tensions are adding to inflation risks, official data showed on Wednesday.

The official producer price index (PPI), which reflects the cost of goods at the factory gate, increased by 8.8 percent year on year in February and eased from a 9.1-percent rise in January, according to data from the National Bureau of Statistics (NBS). 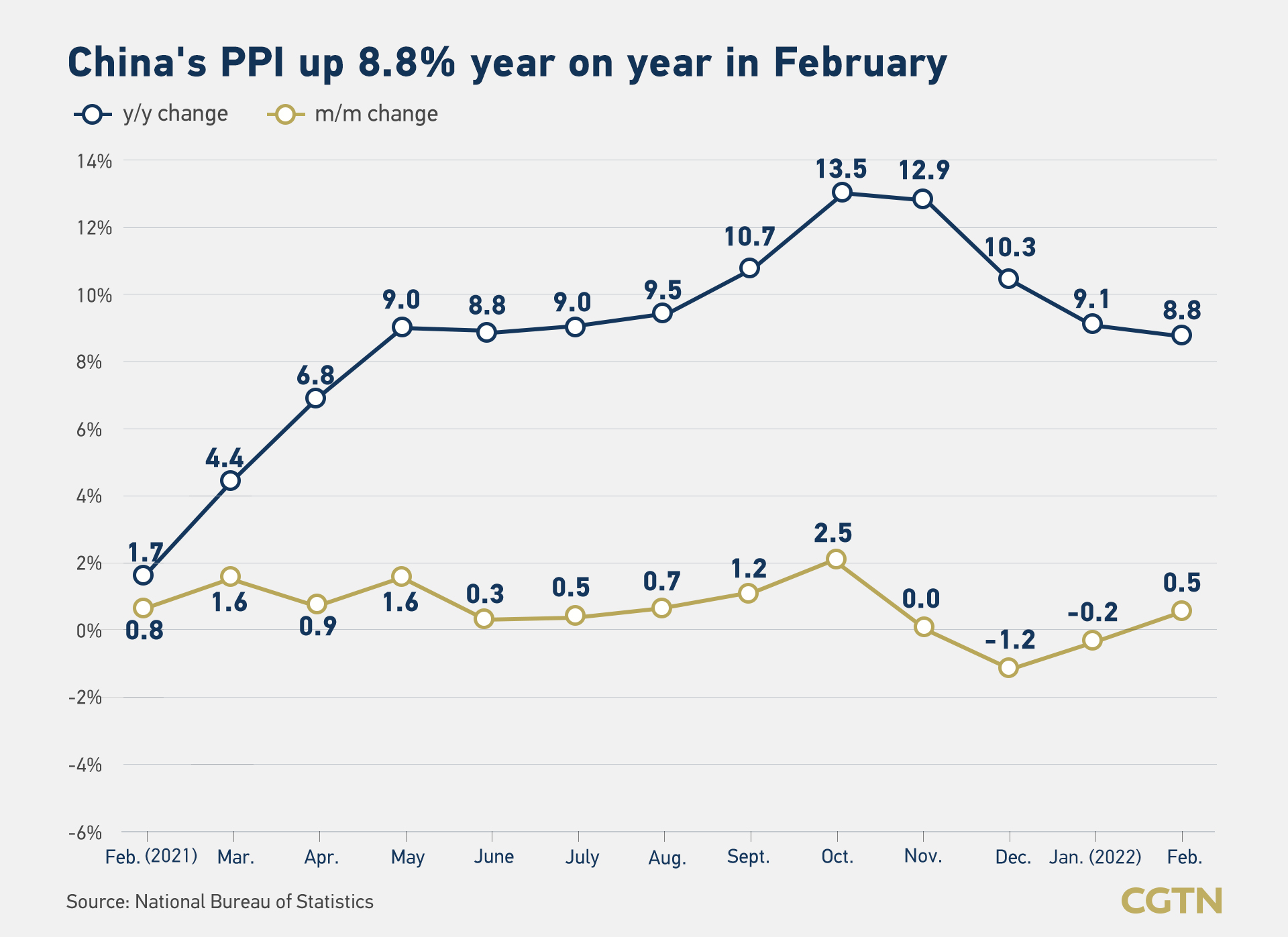 The reading was slightly above the predictions of 8.7 percent by Reuters and 8.6 percent by Bloomberg.

But in month-on-month terms, PPI rose by 0.5 percent from January due to the increased commodity prices globally, such as crude oil and non-ferrous metals, senior NBS statistician Dong Lijuan confirmed.

China has now suffered less from the surging international commodity prices, as transmission to domestic prices has been delayed and weakened thanks to domestic regulation on energy prices, according to Zhang Zhiwei, chief economist of Pinpoint Asset Management.

But Chinese companies will face increasing challenges if high commodity prices continue in the second half of the year, Zhang added.

The rebound in PPI in month-on-month terms that pushes up costs, and the low CPI which reflects soft domestic demand, will squeeze profits and add pressure on Chinese manufacturers, according to Zhang.

The NBS data also showed that the country's official consumer price index (CPI), a main gauge of inflation, grew by 0.9 percent year on year in February, unchanged from a month ago. 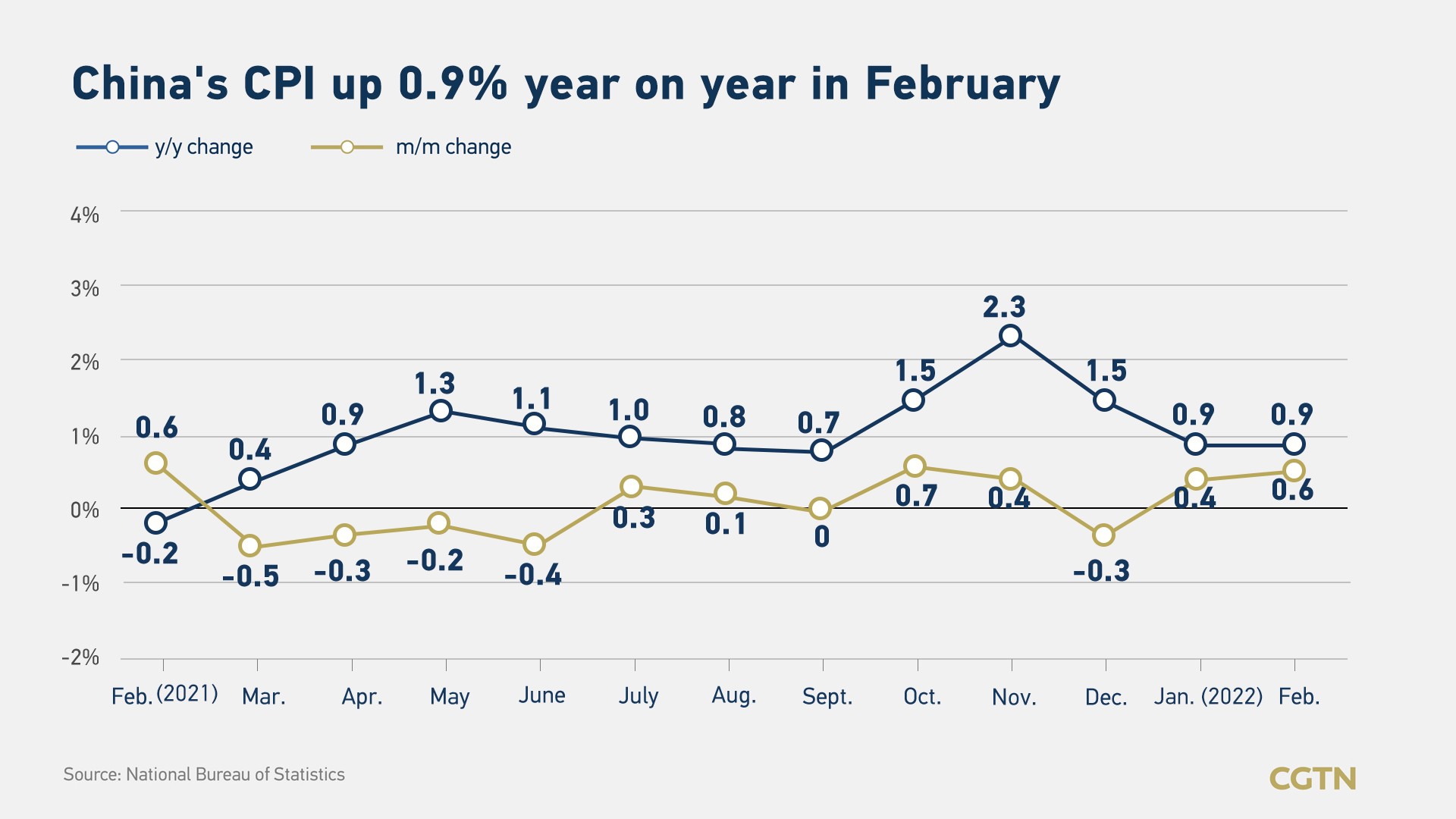 This was in line with estimates by both Reuters and Bloomberg.

"Consumer prices were generally stable compared from a year ago," said Dong. "In February, affected by the Chinese New Year holiday and the fluctuation of international energy prices, CPI saw a bigger month-on-month increase," added Dong after CPI grew by 0.6 percent from January.

Food prices fell by 3.9 percent last month compared with a year earlier, contributing to a 0.76-percentage-point decline in the CPI. The price of pork dropped by 42.5 percent on an annual basis, further down from a 41.6-percent drop in January.

Non-food prices increased by 2.1 percent year on year in February, contributing to a 1.68-percentage-point increase in the CPI.

The growth of core consumer inflation, which excludes volatile energy and food prices, slowed to 1.1 percent in February from 1.2 percent in January.

China has set its CPI target at around 3 percent for this year, according to the government work report for 2022 delivered by Premier Li Keqiang on Saturday. That was unchanged from 2021.