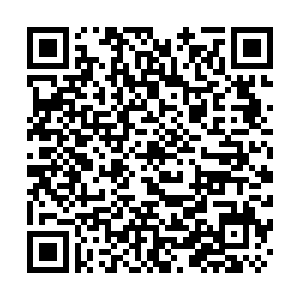 These leopards, under first-class state protection, are highly vigilant, so capturing their whereabouts even in the distribution area is not easy.

However, the situation is different at the reserve in Yan'an City, Shaanxi Province, which is home to the country's largest population of wild North China leopards.

An infrared camera set up in the forest by the research team of Beijing Normal University captured a four-member leopard family.

"We can speculate that the age of the leopard cub is about three months, because wild leopard cubs aging from two to three months are not strong enough to engage in many activities. The mother leopards will leave them in an absolutely safe and secluded location. After two months, the mother leopards will bring the cubs out, and then show them around or even take them to the hunting ground," said Feng Limin, deputy director of the Siberian Tiger and Leopard Monitor and Research Center with the National Forestry and Grassland Administration and associate professor at Beijing Normal University.

Footage shows that one leopard cub became very interested in the infrared camera, sometimes scratching, poking its head into the lens, and even nibbling. The curious and playful movements show the common characteristics of juvenile feline animals.

Expert said it is the first time in China that an infrared camera has captured a full day of the life of a wild leopard raising its cubs, including breastfeeding, eating meat and resting.

Leopards usually hide their cubs in a safe and secluded place, but the location of the camera capturing the leopard family activity is actually not far away from the residential zone. Feng said this shows the good ecological environment and the conservation effect achieved in the area.