Download
China and Vanuatu: Ushering in a new era of development
Yao Ruihua 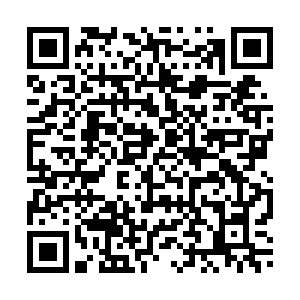 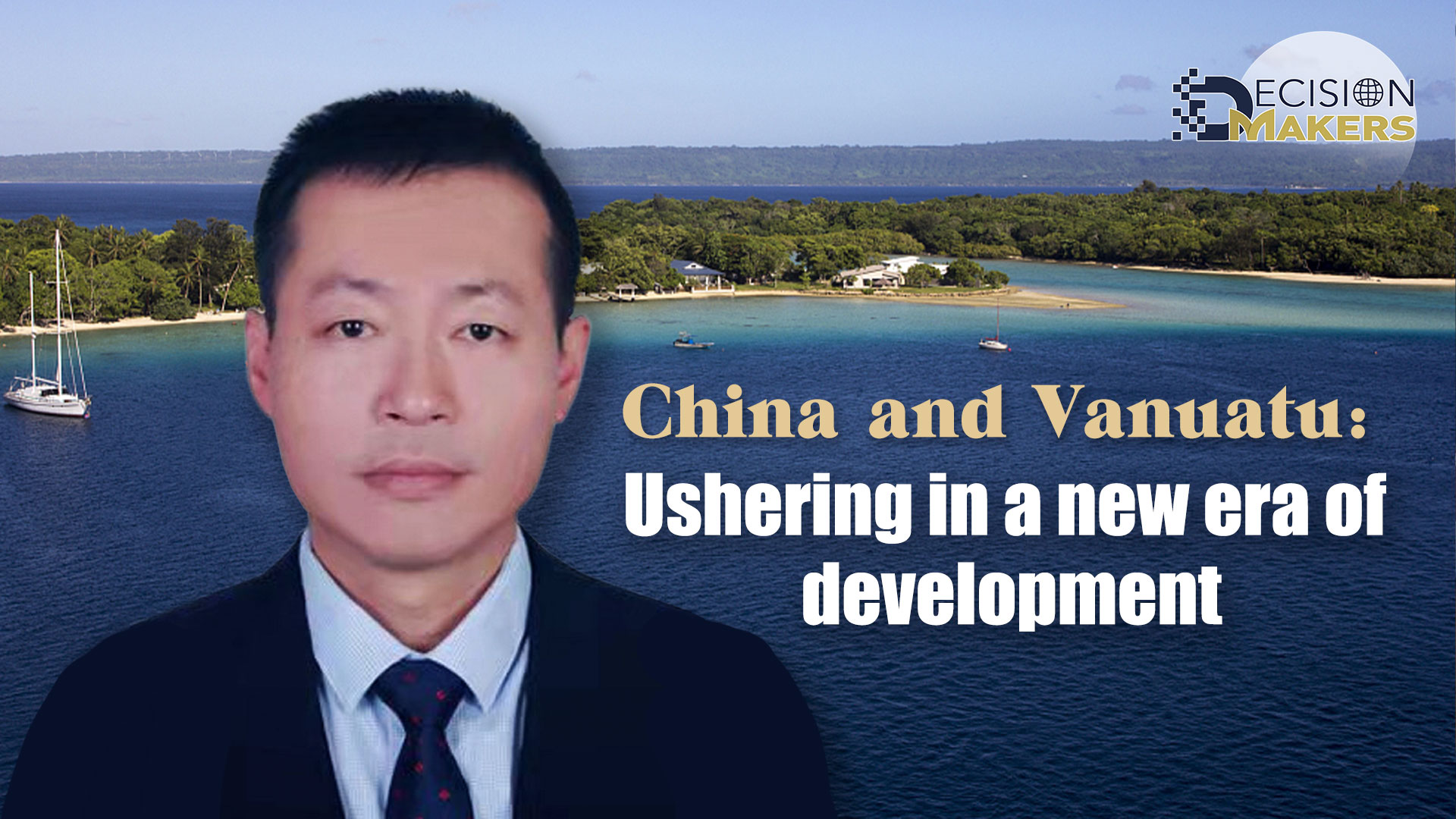 Editor's note: Decision Makers is a global platform for influential leaders to share their insights on events shaping today's world. Yao Ruihua is the Minister Counselor and Chargé d'affaires at the Embassy of the Republic of Vanuatu to China. The article reflects the author's opinions and not necessarily the views of CGTN.

The year 2022 marks 40 years of diplomatic relations between the Republic of Vanuatu and the People's Republic of China. The diplomatic agreement was signed and sealed by our two nations 40 years ago in 1982, and since then this partnership has brought many achievements in terms of technical cooperation and financial assistance from China to Vanuatu.

Ever since the establishment of diplomatic ties, tireless efforts and cooperation endeavors have been made by both governments to promote the prosperity of the two countries and the well-being of our peoples. Over the past 40 years, in fields such as consular services, fisheries, infrastructure, civil aviation, investment, e-commerce and technology, fruitful outcomes have been produced via long-term cooperation, facilitating the economic development of both countries and benefiting our people.

On behalf of the government and people of the Republic of Vanuatu, I reiterate the firm upholding of the One-China Principle and express immense gratitude to China for its continuous assistance with Vanuatu's development needs and priorities.

The Belt and Road Initiative (BRI)

The China-Vanuatu relationship is at its best point in history, and will remain amicable and robust for the foreseeable future, serving as a model for relations between China and Pacific island countries. The past 40 years of diplomatic ties tell us that flourishing relations are rooted in commitment to mutual respect, equality and trust. As a trustworthy friend and partner of Vanuatu, China has played a vital role in Vanuatu's economic and social development, especially through the framework of the BRI.

With the joint pursuit of the greater good for peoples and countries, the initiative proposed by President Xi Jinping in 2013 has already yielded strong results in Vanuatu, enhancing connectivity and practical cooperation between both states. The completion of the National Sports Complex in the Korman Area and the success of the 2017 Pacific Mini Games are testament to the hard work of Chinese and Ni-Vanuatu workers.

As the Chinese saying goes, "If you want to build wealth, build roads first." Thanks to the help of the Chinese government, new roads in Tanna and Malekula have created jobs and opportunities for the local people. In terms of education, with Chinese aid, the Malapoa College extension project has greatly ameliorated the working and studying conditions of faculty members and students, and the exchange of students from both countries has further fostered solid friendship among younger generations.

Mutual support during the COVID-19 pandemic

As one of the gravest pandemics that humanity has ever experienced, COVID-19 poses a great threat to people around the globe. In the face of the virus, the mutual support between China and Vanuatu has demonstrated a strong brotherhood and corresponds to the very meaning of "building a community with a shared future for mankind."

When China was in its most difficult times, the government and people of Vanuatu firmly stood on China's side, opposing discrimination and xenophobia against Chinese people and donating 10 million Vatu ($87,573) to China.

Later when COVID-19 became a global pandemic, the central government of China provided timely assistance in return, providing over 150 million Vatu ($1.3 million) to cater to the immediate needs of the Vanuatu government and its people in the form of cash, face masks, protective suits and other PPE, ventilators, blood gas analyzers, other ICU equipment, coronavirus testing kits, isolation wards and laboratories, boats, iron rooves, solar lights, food and other disaster relief assistance. 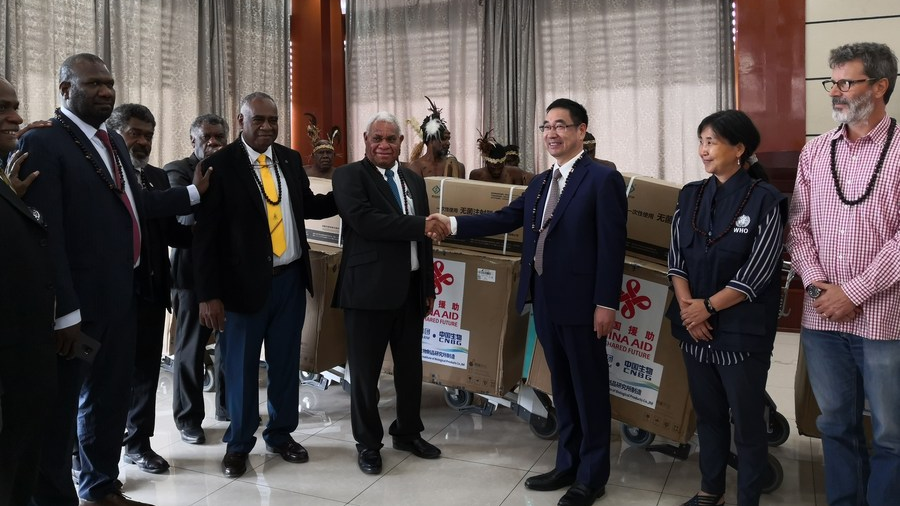 Apart from medical supplies, two Chinese medical teams also worked in Port Vila and Luganville, standing side by side with Vanuatu colleagues on the front lines to battle the disease.

Amid the fight against the COVID-19 pandemic, cooperation between the Chinese government and the governments of Pacific islands and between health experts of both sides served to further contain the spread of the virus, with experts sharing their opinions about COVID-19 prevention, containment, diagnosis and treatment.

The commemoration of the 40th Anniversary of the China-Vanuatu relationship marks another important milestone in our diplomatic relations, paving the way towards stronger future cooperation in areas of mutual interest.

As an island nation, Vanuatu, along with other Pacific island countries, is severely concerned with the maritime environment and climate change. In order to protect the ocean environment, accelerate the implementation of the 2030 Agenda for Sustainable Development, and pursue more robust, more balanced and greener global development, Vanuatu welcomes the Global Development Initiative (GDI) proposed by President Xi Jinping at the general debate of the 76th session of the UN General Assembly and is more than happy to align with the Pacific Roadmap for sustainable development and the 2050 Strategy for the Blue Pacific Continent. By doing this, I'm confident that we will usher in a new era of balanced, coordinated, inclusive and greener economic growth.

With the ever-changing global landscape, I, together with my nation's foreign minister, Marc Ati, would like to reaffirm Vanuatu's commitment to strengthening multilateralism through the UN-centered international system.

Abiding by the UN Charter, Vanuatu will work with China to uphold the international-law-based world order with the UN Charter at its core, and to enhance communication and collaboration within the UN framework and other multinational institutions in response to topics such as climate change and the implementation of the 2030 Agenda for Sustainable Development.

Bearing that in mind, I sincerely hope and believe that the relations between these two countries will continue to remain stable, and go from strength to strength on the basis of mutual respect and collective effort, especially during the post-COVID-19 period. The Vanuatu government looks forward to working closely with China, under a comprehensive strategic partnership, to derive collective ways forward and stimulate post-COVID-19 socio-economic recovery.