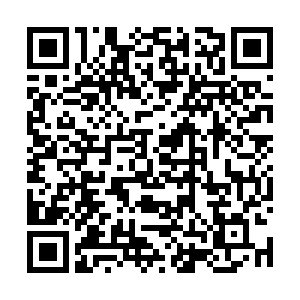 Since the Russia-Ukraine conflict began last month, more than 3.7 million people have fled Ukraine, according to the United Nations Refugee Agency. And the number is still climbing.

So far, most neighboring countries have welcomed Ukrainian refugees, a majority of whom have flooded into Poland, Romania and Moldova.

Currently, there are dozens of temporary shelters in Lviv, a city in western Ukraine, where people fleeing the conflict usually stay before continuing their journey into other European countries. Most refugees are women, children and the elderly, as Ukraine has banned men aged 18 to 60 from leaving, to help fight the war.

Over 2.2 million refugees have crossed the Polish border, accounting for roughly half of all refugees escaping Ukraine since February. In the Polish city of Lublin, solidarity with Ukraine is strong. Make-shift shelters have been prepared, offering hot meals and beds. Supplies have arrived at the city's donation centers and local residents even invited refugees to their homes.

Other neighboring countries, such as Romania, Hungary, Moldova, Russia and Slovakia have also received hundreds of thousands of displaced people. A small number of people have gone to Belarus. 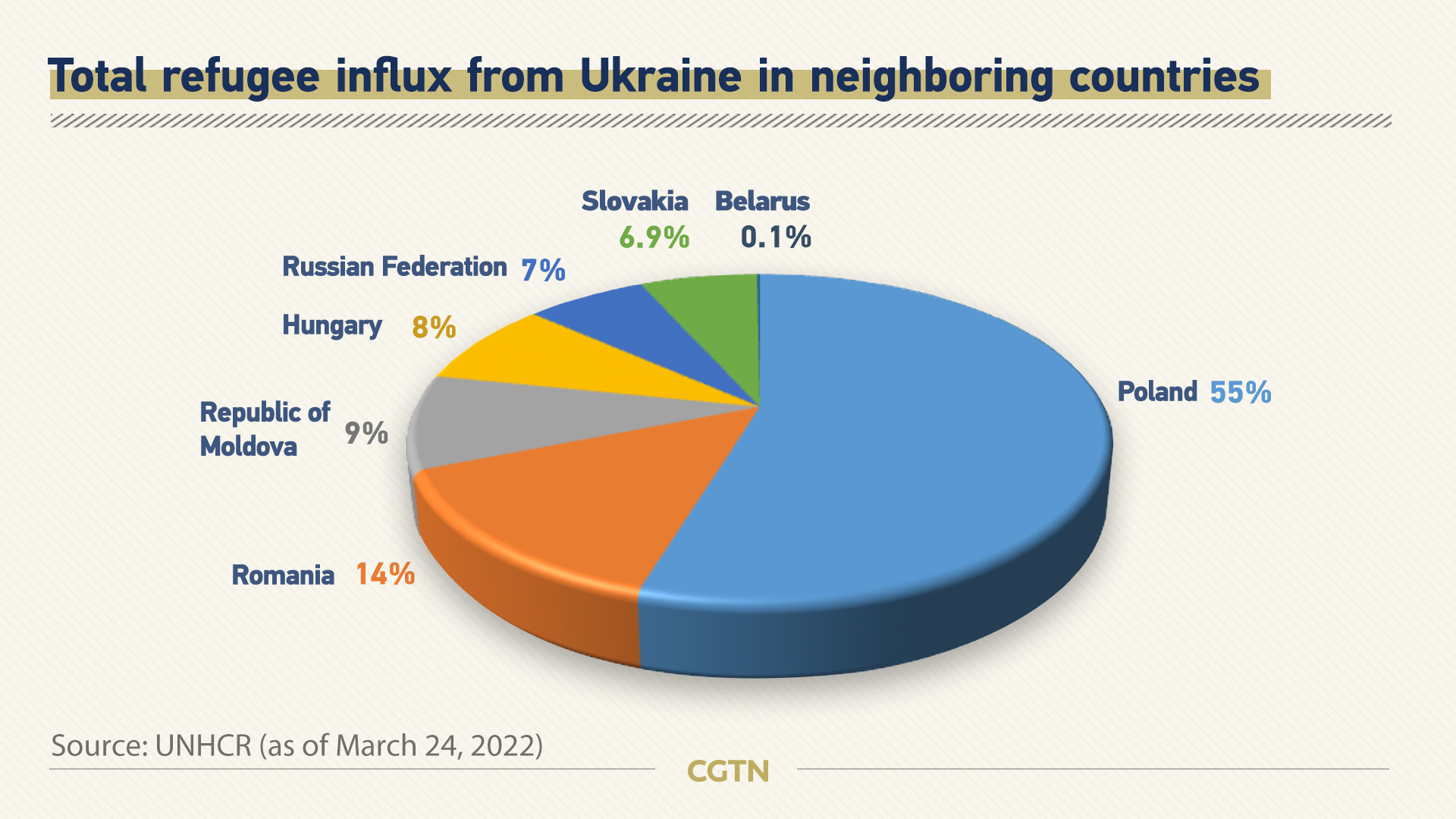 The Polish government has approved a new legislation that will simplify Ukrainian refugees' stay, employment and access to public healthcare and social assistance in the country. Romania and Hungary have prepared special funds or allowances for housing, food and clothing.

"For countries in central and eastern Europe, Ukrainians are neighbors with similar historical, cultural and religious backgrounds, and they had no choice but to help especially because of geographical proximity," said Ding Chun, professor at Center for European Studies at Fudan University in Shanghai.

The European Union offers Ukrainian refugees temporary protection in any member state for up to three years, which can be extended depending upon the situation in Ukraine. They will be entitled to rights such as a residence permit, employment and housing, medical assistance, as well as access to education for children. Many train operators in Europe also announced that refugees from Ukraine can travel for free.

To help the large number of displaced Ukrainians, humanitarian aid from across the world including tents, blankets and medicine are heading to Ukraine and its neighboring countries. 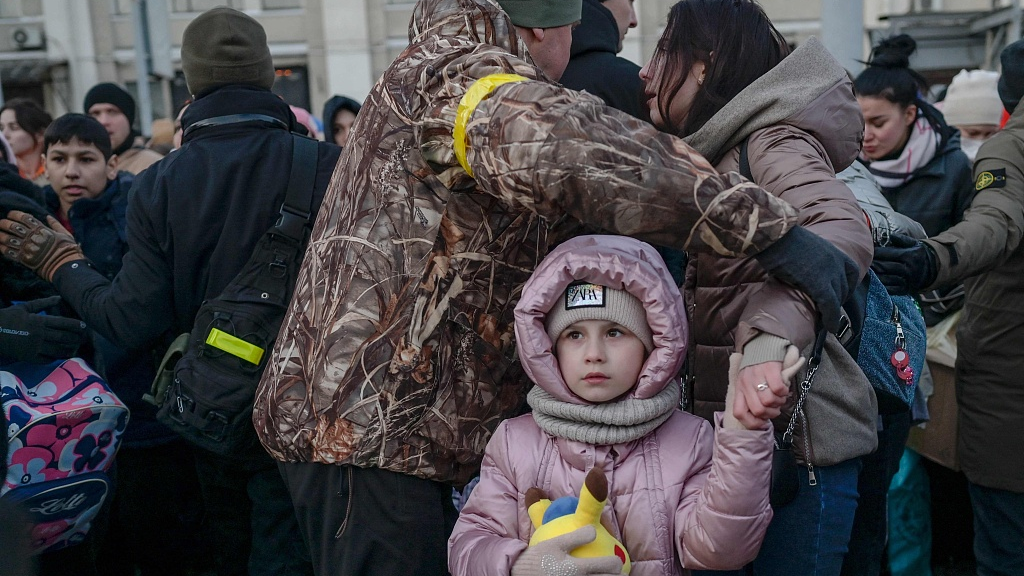 People try to evacuate the city at the central train station of the major port city of Odessa, Ukraine, March 9, 2022. /AFP

People try to evacuate the city at the central train station of the major port city of Odessa, Ukraine, March 9, 2022. /AFP

Faced with a refugee crisis not seen in Europe since World War II, it seems European countries, who had been divided over migration policy for many years, are ready to receive refugees from Ukraine.

At present, governments of host countries face immense pressures, and some Polish cities are struggling to cope with the influx of refugees. "The cost will be growing and that is why Poland is waiting very impatiently for recovery funds from the EU and for promised help from the EU, United States and others, because not everything could be based on our own structure, and the pockets of our people," Lukasz Jasina, Polish foreign ministry spokesperson, told CGTN.

Moreover, the increasing migration of large numbers of people is posing a serious threat to pandemic control. Before the conflict, only 34 percent of Ukrainians were fully vaccinated and over 26,000 newly confirmed cases were reported per day in Ukraine. In camps or vehicles that are crowded with refugees, the risk of getting COVID-19 is high. 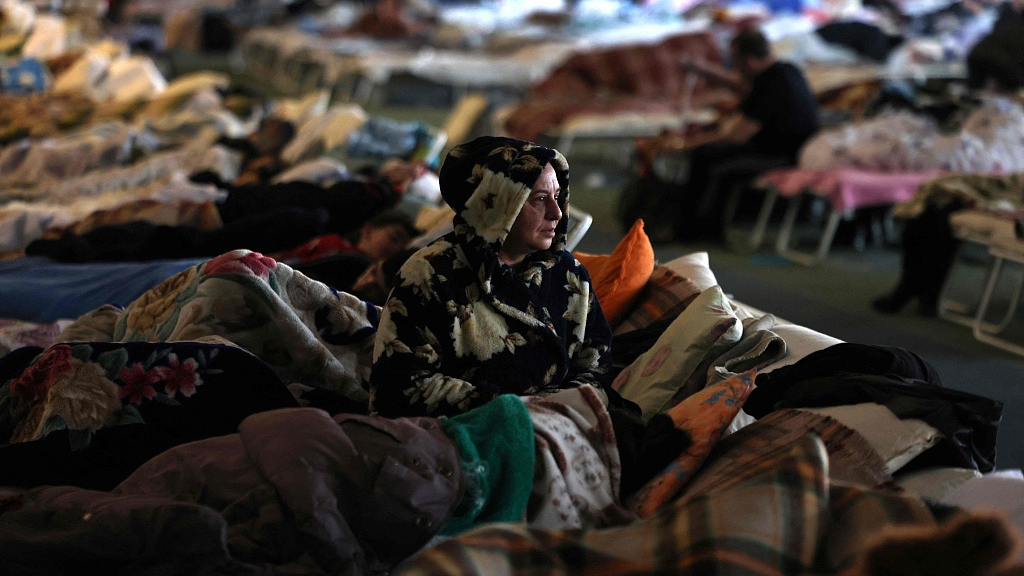 A Ukrainian woman who fled the war in her country takes refuge in the main hall of an athletic complex in the Moldovan capital Kishinev, March 10, 2022. /AFP

A Ukrainian woman who fled the war in her country takes refuge in the main hall of an athletic complex in the Moldovan capital Kishinev, March 10, 2022. /AFP

As the pandemic continues to wreak havoc on societies throughout Europe, unemployment across the EU remained high in 2021.

"Social and economic problems within European countries were exacerbated by the influx of refugees after the Arab Spring since 2010. With the existing problems still accumulating, most European countries are not fully prepared to deal with the new round of refugee crisis," said Feng Zhongping, director of the Institute of European Studies at the Chinese Academy of Social Sciences.

As the Syrian civil war entered one of its bloodiest years in 2015, the number of refugees seeking asylum in Europe peaked, creating a migrant crisis unseen since World War II. While mostly consisted of Syrians, refugees also came from other countries in the Middle East and Africa, totaling 1.3 million people.

During the refugee crisis in 2015, several countries in central Europe, such as Romania and Hungary, voted against accepting asylum-seekers assigned by the EU. Two years later, the European Commission sued Poland, Hungary and the Czech Republic for refusing to take in their mandatory quotas. In 2020, the EU's top court ruled that they broke EU law by refusing to host refugees.

When these countries open their borders and receive hundreds of thousands of refugees from Ukraine in days, asylum seekers from the Middle East and Africa see the comparison.

"These people are intelligent, they are educated people," said Bulgarian Prime Minister Kiril Petkov when he talked about Ukrainians fleeing the conflict. "This is not the refugee wave we have been used to, people we were not sure about their identity, people with unclear pasts, who could have been even terrorists."

Similar portrayals of ranking refugees from Ukraine above those from other regions also appeared in news outlets. A reporter from CBS described Kyiv as a "relatively civilized, relatively European" city, comparing with other places of war. A woman from Ukraine holds a child in front of poster promoting solidarity with Ukraine near a sports-hall-turned refugee center in Warsaw, Poland, March 18, 2022. /CFP

A woman from Ukraine holds a child in front of poster promoting solidarity with Ukraine near a sports-hall-turned refugee center in Warsaw, Poland, March 18, 2022. /CFP

Irish politician Clare Daly, Member of the European Parliament, pointed out Europe's differential treatment towards victims of war in a plenary on March 7.

"Since the last plenary, tens of thousands of Afghani citizens have been forced to flee in search of food and safety," Daly said. "Five million children face famine, an ongoing and painful death… And not a mention of it. Not here, not anywhere. No wall-to-wall TV coverage. No emergency humanitarian response. No special plenaries. Not even a mention in this plenary."

Some Twitter users said that EU should put the interests of European countries first, commenting below Daly's post of her speech video clip. But other users commented that all victims of war deserve protection and support.

EU's temporary protection directive only covers Ukrainian citizens and non-Ukrainians with long-term residence permit in Ukraine. Other third-country nationals with short-term stay are not included in the policy and need to go back to their home country.

Cases of African and Asian students being discriminated at the Polish border have been reported, saying they waited longer hours and even days before crossing the border than Caucasian refugees.

"All who flee a conflict situation have the same right to safe passage under UN Convention and the color of their passport or their skin should make no difference," said Nigerian President Muhammadu Buhari who later allocated a special fund to assist the evacuation of Nigerian citizens in Ukraine.