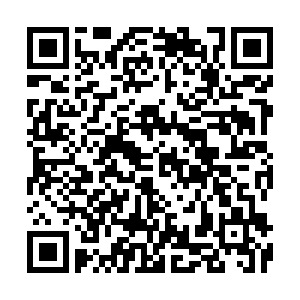 France votes in the first round of its presidential election on April 10 with Emmanuel Macron the polling favorite and a clutch of outspoken candidates seeking to go head-to-head with the 44-year-old incumbent in a runoff.

Macron, the establishment insider turned maverick outsider who won the presidency in 2017, is all but guaranteed to top the first-round rankings, though polls suggest he will fall far short of the 50-percent threshold required to prevent a runoff election on April 24.

His rivals, chief among them National Rally leader Marine Le Pen, have less than a fortnight to persuade voters they should be the candidate to join Macron in the final two. 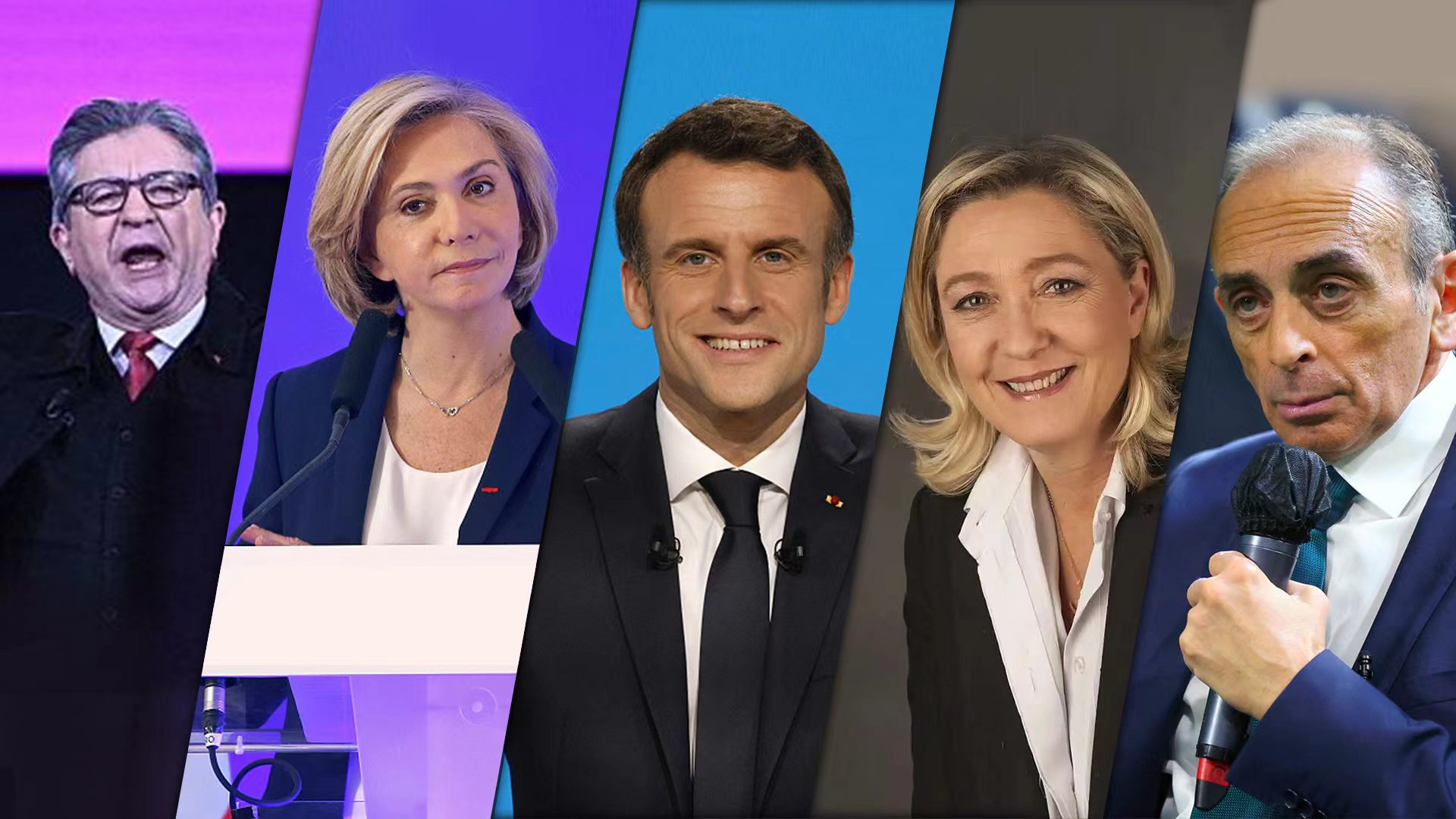 Macron and his En Marche movement sank the two establishment parties in 2017, and neither has fully recovered. While conservative Valerie Pecresse is still in contention as the Republican candidate, the Socialist Party's Anne Hidalgo is languishing at around 2 percent.

That leaves Macron with three firebrand rivals, often referred to as "sovereignist candidates," alongside the more mainstream Pecresse.

Le Pen, who lost out in 2017, now has a challenge from further on the right in Eric Zemmour, who makes her views look less extreme by comparison, while veteran left-winger Jean-Luc Melenchon – who narrowly missed out on the second round in 2017 – is the candidate with polling momentum in the final days of the campaign.

Who are the leading candidates?

Emmanuel Macron: The 44-year-old worked in banking and served as economy minister under Socialist President Francois Hollande before launching his own En Marche centrist party in 2016. He had never run for public office before winning the presidency at his first attempt in 2017. He beat Le Pen in the second round, taking 66.1 percent of the vote. As president, he has pushed pro-business reforms but faced many challenges, from mass strikes and the yellow vest movement to the COVID-19 pandemic.
Marine Le Pen: The 53-year-old took over as leader of the National Front in 2011 from her infamous far-right father, Jean-Marie, and secured a party record 17.9 percent of the first-round vote in the 2012 presidential election. She rebranded the party as National Rally in 2017 and won 21.3 percent, sending her into a runoff which she lost to Macron.
Eric Zemmour: The 63-year-old made his name as a hardline right-wing journalist and talk-show pundit. Anti-immigration and anti-Islam themes have been central to his nationalistic campaign. He has been convicted of using hate speech, and has promoted the "great replacement" theory.
Valerie Pecresse: The 54-year-old served as an adviser to President Jacques Chirac and as a minister in the Sarkozy government, and is standing for the presidency under the banner of The Republicans, despite having left the conservative party in 2019. Her relatively mainstream views stand out from Macron's other rivals, but her campaign has been hit by defections and struggles on the trail.
Jean-Luc Melenchon: The 70-year-old former Socialist senator, who started his own hard-left party in 2009, backs a 32-hour working week and opposes French membership in NATO. He stood for the presidency in 2012, winning 11.1 percent of the first-round vote, and nearly made the second round in 2017 when he took 19.6 percent.

An aggregate of public polling calculated by Reuters indicates that Macron holds a comfortable lead over a tightly-packed group of challengers.

The president was elected in 2017 after forming his own centrist party, and won votes from both the left and right. In office, he's generally seen as having governed to the right and his leadership style hasn't always gone down well.

But Macron positioned himself as a broker in the Ukraine-Russia conflict, and received a five-point polling boost in the weeks after it began as international affairs became a central campaign issue.

The president's lead has slipped a little in the past fortnight after a renewed call for pension reform, but he's hoping the offer of continuity in an unstable time – coupled with the divisive nature of some of the rival campaigns – will see him sail into the second round and return to the Elysee Palace.

Le Pen looks likely to be Macron's challenger in round two, but has suffered setbacks, including her high-profile niece coming out for Zemmour and other candidates crowding her space on the right. She has a five-point polling lead over Melenchon, who came within a whisker of beating her to second place in 2017.

Melenchon, a hard-left candidate, has gained momentum as the conflict in Ukraine has gone on and the debate has moved away from immigration, the dominant theme of far-right candidate Zemmour, who has dropped to 11 points alongside Pecresse, who has struggled to make her voice heard among her outspoken rivals. 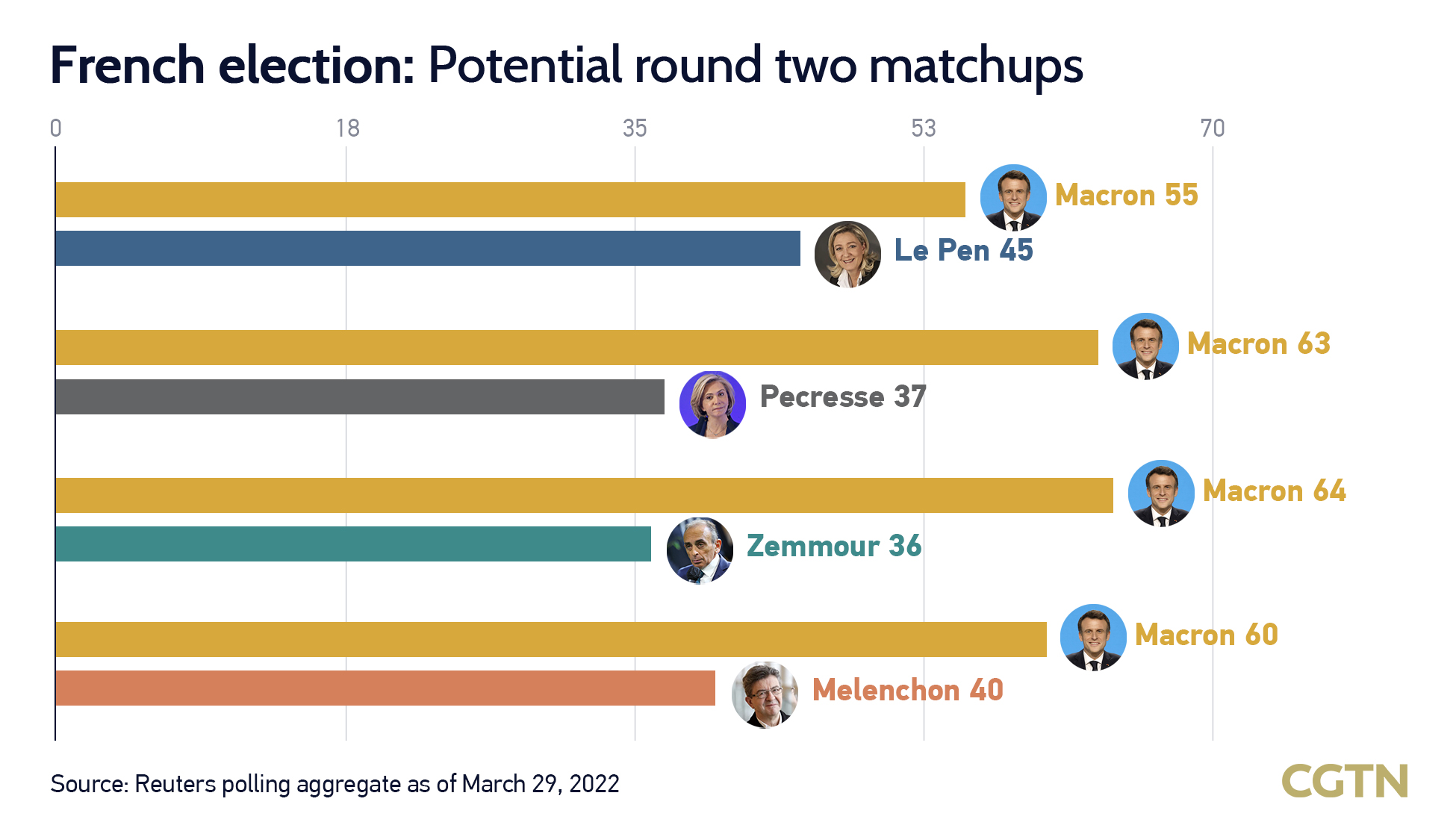 The current polling suggests a Macron-Le Pen rematch is the most likely scenario in the second round on April 24.

In 2017, Macron defeated Le Pen easily by about 32 points. Head-to-head polls suggest a much closer contest if the runoff is repeated, with the spread narrowing to 10 points in the Reuters aggregate on March 29.

The polls indicate Melenchon would be Macron's next hardest challenger, but have the incumbent running out a comfortable 20-point victory. Against Zemmour and Pecresse, the polls point to victories by even more secure margins – and a second term for the president.