Download
Friendship that has stood the test of time
Akram Zeynalli 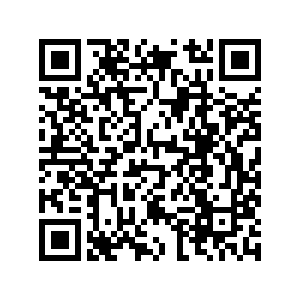 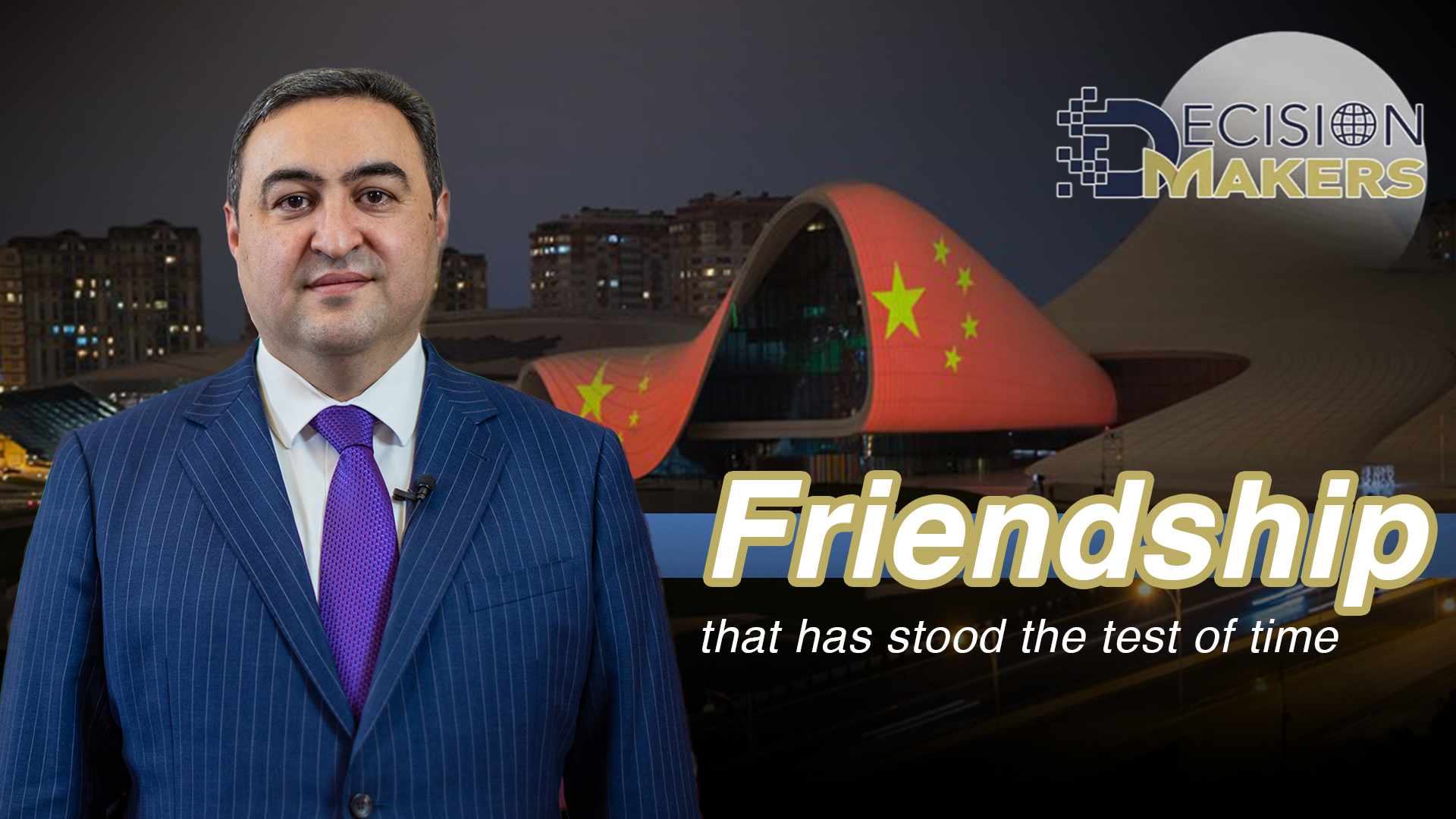 Editor's note: Decision Makers is a global platform for decision makers to share their insights on events shaping today's world. Akram Zeynalli is the ambassador of the Republic of Azerbaijan to the People's Republic of China. The article reflects the author's opinions and not necessarily the views of CGTN.

The long-established and rich history of relations between Chinese and Azerbaijani people dates back to the ancient Silk Road. Our peoples maintained trade and cultural ties through the ancient Silk Road as early as 2,500 years ago. A description of a beautiful Chinese lady in the poem called "The Seven Beauties" written by the greatest Azerbaijani poet Nizami Ganjavi in the 12th century is also evidence of long-standing cultural ties between our peoples. It is gratifying to see that the bilateral relations between our countries have been developing successfully since Azerbaijan regained its independence in 1991.

This year marks the 30th anniversary of the establishment of diplomatic relations between Azerbaijan and China. Azerbaijan attaches special importance to bilateral ties with China and is interested in deepening and broadening these relations in all spheres. At present, the ties are characterized as multidimensional partnership relations based on friendship and mutual trust, with high growth dynamics.

It has to be noted that the mutual trust, dedicated political dialogue and friendship between President Xi Jinping and President Ilham Aliyev play an important role also in developing bilateral economic and trade ties. Currently, more than 190 Chinese companies are registered in Azerbaijan. So far, China has invested almost more than $900 million in the economy of Azerbaijan, and Azerbaijan, in its turn, has invested more than $1.7 billion in the Chinese economy. Big Chinese companies in the field of information and communications technology, such as Huawei and ZTE, are operating successfully in Azerbaijan, and it is worth noting that the regional office of Huawei is located in Baku, capital of the Eurasian country. It is also very important to mention the role of Azerbaijan-China Intergovernmental Commission on Trade and Economic Cooperation in enhancing dialogue for economic cooperation, establishing close contacts between the businesses from both sides and solving the problems faced by companies in each country. The eighth meeting of the commission was held online in October 2021, where tangible results were achieved and concrete goals were determined for future cooperation.

Azerbaijan is China's main trading partner in the South Caucasus and we are committed to improving our trade relations further. In this respect, it is worth mentioning that Azerbaijan has always been represented at the China International Import Expo with a great pavilion, a substantial number of companies and a large delegation comprised of high-level government officials ever since the first expo was held. Even during the last expo in November 2021, we set up a significantly big pavilion and showcased food and agricultural products of Azerbaijan, despite the fact that many other countries failed to participate due to the pandemic. We opened Azerbaijan Trade Houses in the Chinese cities of Qingdao, Luzhou, Zhangjiajie and Lianyungang, as well as Azerbaijan Wine Houses in Shanghai and Urumqi. Negotiations on opening new trade and wine houses in other regions of China are being held with relevant authorities, so that we can have further access to more Chinese customers soon.

Undoubtedly, Azerbaijan is keen on improving its trade relations with China and we strongly believe that we will be able to achieve more positive results in terms of trade between our countries in the near future. 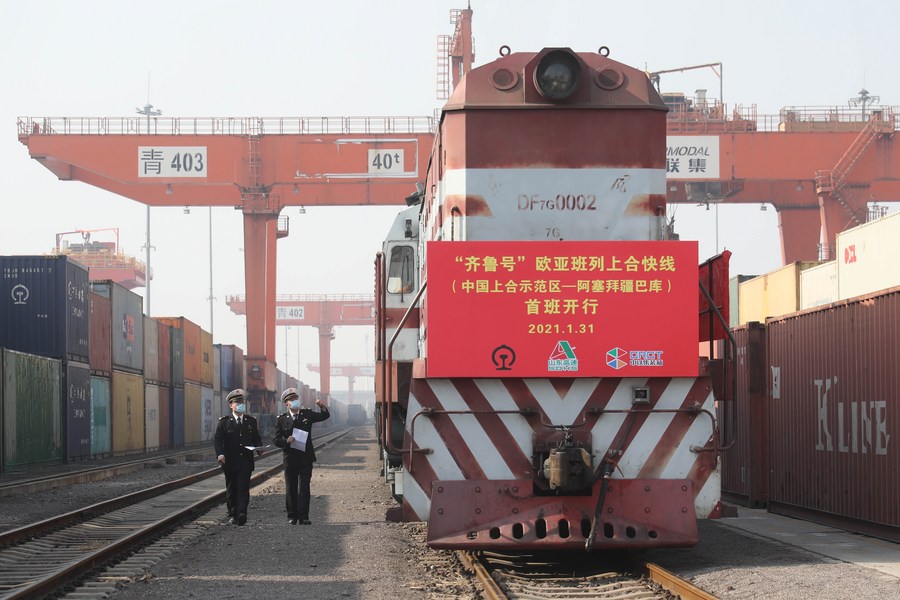 Azerbaijan was one of the very first supporters of the Belt and Road Initiative (BRI) and as a testimony to our aspirations to jointly implement this initiative, Azerbaijan has substantially invested in infrastructure projects both in the country and in the region in order to become a regional transit and logistics hub as a country located at the crossroads of Asia and Europe.

Developing into a very crucial country along the BRI, Azerbaijan now offers better options for efficient and economically viable transportation of goods from China to Europe and vice versa. In this sense, Azerbaijan has initiated the Trans-Caspian International Transport Route and carried out several important infrastructure projects such as the Baku-Tbilisi-Kars railway, Baku International Sea Trade Port and Alyat Free Economic Zone. Several block trains from Xi'an, capital of northwest China's Shaanxi Province, have already passed through Azerbaijan on their way to Europe and this route is becoming more and more active as our economic cooperation enhances. Furthermore, there are direct passenger flights between Baku and the Chinese cities of Beijing and Urumqi, as well as direct cargo flights between Baku and Shanghai, Hong Kong, Tianjin and Zhengzhou, which makes Azerbaijan even more attractive for Chinese companies to do business.

Today, there are huge opportunities for Chinese companies to invest and work in Azerbaijan. It is worth noting that currently, the government of Azerbaijan is working on projects to revive Karabakh and Eastern Zangazur economic regions. In this sense, we will actively cooperate with Chinese friends and businesses that are interested in getting involved in this restoration process and in realization of new infrastructure projects in these regions.

As one of such promising projects, the Zangazur corridor will connect the mainland of Azerbaijan to its landlocked exclave – Nakhchivan Autonomous Republic. Transiting directly across the Caucasus, the new Zangazur corridor will significantly cut road transportation time from China to Europe and vice versa, complementing the Baku-Tbilisi-Kars railway and facilitating trade and business. Clearly, this new corridor will play an important role in terms of connectivity along the BRI route and bring about further opportunities for China and Azerbaijan to expand cooperation in transportation and logistics.

The economic and political dimensions apart, no opportunity is spared to bring our peoples closer. We used every platform and opportunity offered by China in order to present rich Azerbaijani culture and its tourism potential to our Chinese friends and thus contributed to rapprochement of our peoples.

The local governments of cities and districts of Azerbaijan also work closely with the local governments of regions and provinces of China to enhance economic cooperation and reach win-win results. In view of this, we have established friendly and mutually advantageous relations between several cities of China and Azerbaijan, signed documents on sister-city relationships and will continue to make every effort to further initiate and promote such good practices.

Undoubtedly, China's sustainable, solid and robust economic growth creates vast opportunities for other countries to actively cooperate with China and reap the benefits of successful partnership. Azerbaijan stands ready to work with China to profit from mutually beneficial cooperation.