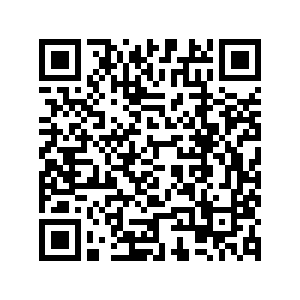 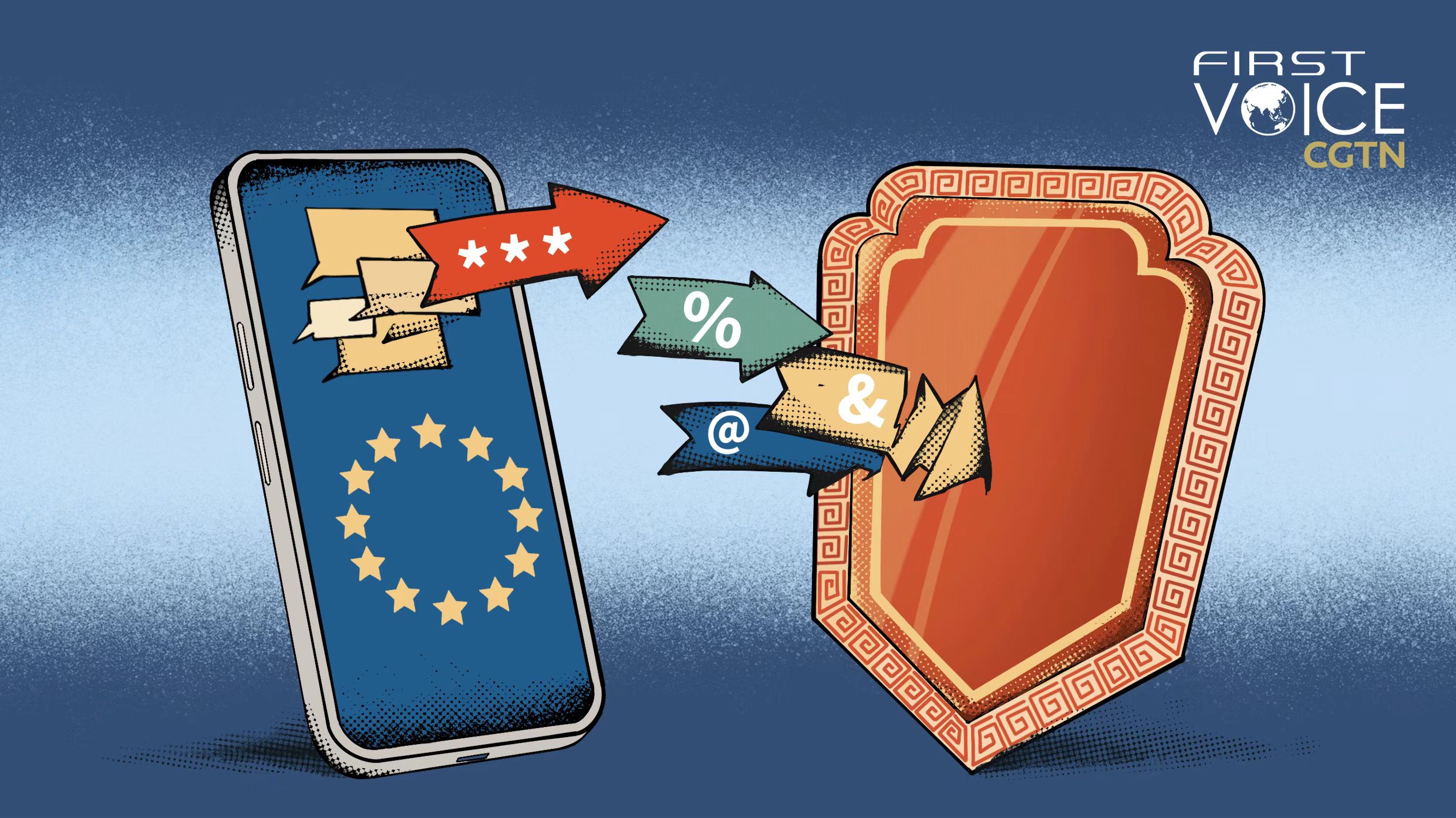 On April 1, President of the EU Commission Ursula von der Leyen tweeted a list of four things that China "must" do: Stop "unjustified trade measures" against Lithuania; remove sanctions on MEPs; Address the human and labor rights problems in Xinjiang Uygur Autonomous Region; and improve market access and conditions for EU companies.

This surprisingly undiplomatically condescending attitude toward China is made even more surprising as it comes when China and the EU held their first summit in almost two years. It's quite unclear why the EU believes this is the time to be demanding and overbearing towards China when it's clearly in their best interests to build relationships as it faces the Ukraine conflict on its doorsteps.

The age of colonialism is over. The only thing Chinese leaders "must" do is look after the interests of its people. Bullying and threats rarely achieve the desired results and often make a situation worse. What makes the situation worse is that von der Leyen gave four terse orders to China in her tweet that are based on smears and misinformation designed to isolate and diminish Beijing while shifting responsibility for Europe's own problems and mistakes onto China.

Von der Leyen ordered China to stop "unjustified trade measures against Lithuania." First of all, China has never discriminated against any country or enterprises and has always upheld the WTO rules and created a fair and competitive market environment for trade. However, Lithuania hasn’t upheld its terms to China when it established diplomatic relations in 1991. The Lithuanian government allowed Taiwan authorities to set up a "Taiwan representative office" in Lithuania last year, in a brazen breach of the one-China principle. The Chinese government is within its obligation and responsibility to the national integrity to respond to such a breach of contract. This is a bilateral problem. The European Union as a whole should be very careful in assessing its participation in this bilateral relationship.

The tweet also said China "must" lift its sanctions against members of the European Parliament who have spread lies and disinformation alleging the mistreatment of Uygurs in Xinjiang. This conveniently leaves out the fact that China's sanctions are responding to sanctions the European Union first arbitrarily placed on China. The EU cannot expect to be able to freely sanction Chinese officials without a response, especially when the EU's sanctions on Chinese officials may have been politically convenient, but they had no factual basis and constituted gross interference in China's internal affairs. 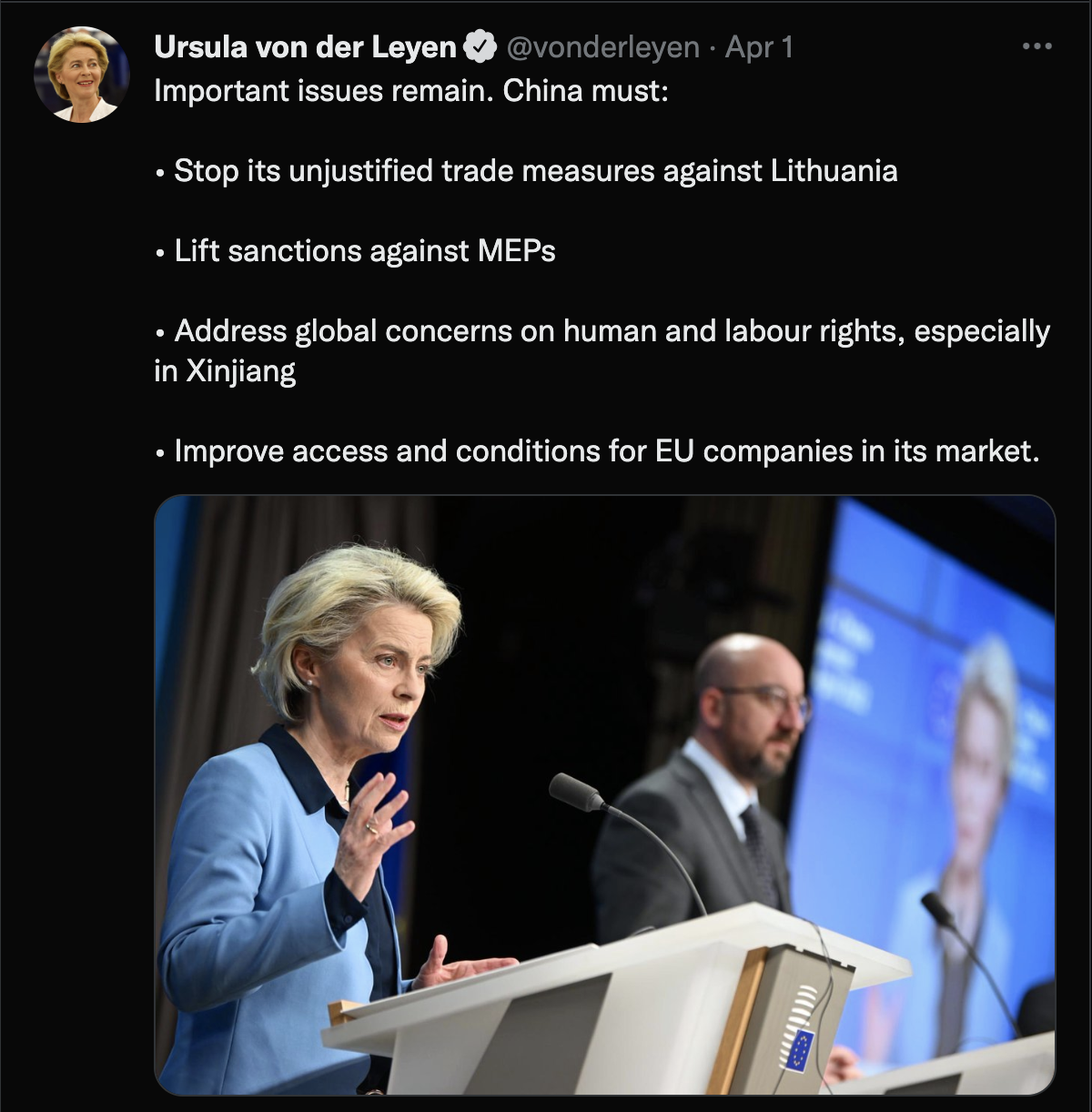 The tweet stated that China "must" address "global concerns on human and labor rights, especially in Xinjiang." First of all, these so-called "global concerns" about Xinjiang are not global at all, but spread from shady disinformation coming from questionable U.S.-government-backed think tanks and Uygur separatist groups whose stated aim is breaking away from China. The clamor about so-called human and labor rights notably is not coming from the Islamic world, but the West, which has a notoriously poor track record on caring about the human rights of Muslims.

The U.S. government has put tremendous pressure on international corporations to pull out of Xinjiang, but strikingly no corporation has ever said it witnessed any human rights violations there. The U.S. and some politicians in the EU have made grave accusations about "genocide" in Xinjiang. Yet not one of them have been able to make a convincing case about it. Perhaps it's time to recognize that the reason why there's no convincing case is because there’s no case at all, but rather the lies spread by media-attention-grabbers like Adrian Zenz.

The final demand of the tweet is that China "must" improve access and conditions for EU companies in its market. This is disingenuous because China and the EU have comprehensively dealt with these issues in their Comprehensive Agreement on Investment. This deal reached on December 30, 2020, after seven years and 35 rounds of negotiations, addresses both sides' concerns about market access and conditions.

It is Europe, not China, that's putting this deal on ice. It is ridiculous for the EU to demand random concessions from China simply because it has chosen not to sign a diligently negotiated trade deal that both sides agree would level the playing field between Chinese and European firms.

Although many people in the West still don't realize it, the age of colonialism is over. Treating other nations in an arrogant manner or without basic respect or consideration of their concerns get nothing done. The European Union "must" see that it bears responsibility for its own problems, instead of instructing others on how they "must" behave.