The northern Ukrainian town of Bucha in suburban Kyiv was the scene of what appears to be a gruesome war crime. Footage and images have circulated in the past few days showing dead bodies strewn across the streets. Ukraine and its U.S.-led Western partners alleged that the departing Russian Armed Forces (RAF) killed innocent civilians as punishment for their opposition to its operation and should thus be charged with war crimes. Moscow, meanwhile, denies any connection to this incident.

According to the Russian Defense Ministry, some serious questions need to be answered. These include why the town's mayor didn't make mention of these crimes during his video address the day after the RAF's departure. They also asked why footage and images didn't circulate until a couple days later once Ukrainian intelligence officials and the media entered Bucha, and why those cadavers allegedly did not exhibit signs of days-long exposure to the elements.

Russia accused Ukraine of staging the incident, even going as far as suggesting that the deceased shown in the media might actually have been Russia-sympathizing Ukrainians who were killed by ultra-nationalist militias. Moscow bases this claim on the fact that many victims were seen wearing the same white arm bands associated with civilians and Russians in the areas of Ukraine controlled by the RAF. For as seemingly absurd as some might initially think this interpretation is, it can't be dismissed out of hand.

Pentagon Press Secretary John Kirby warned in February that Russia "is planning to stage a fake attack by Ukrainian military or intelligence forces… As part of this fake attack, we believe that Russia would produce a very graphic propaganda video which would include corpses and actors that would be depicting mourners and images of destroyed locations." If false flag operations are indeed possible like the U.S. believes, then it must be investigated whether Ukraine also carried one out like Russia claims.

A United Nation Security Council (UNSC) meeting on the issue was held on April 5. Ukrainian President Volodymyr Zelenskyy addressed the forum in a dramatic speech where he compared the RAF's alleged activities to those of terrorists like ISIL. He also said that more such alleged war crimes have been committed all over Ukraine and that Bucha is but one such incident among many. Zelenskyy condemned Russia in the harshest terms and called for its removal from the UNSC.

Furthermore, the Ukrainian leader demanded the formation of a modern-day Nuremburg Tribunal to hold the alleged Russian culprits to account. In addition, Zelenskyy demanded far-reaching UN reform in order to restore equality and justice to international affairs, which he said Russia violated.

Considering the fact that an independent and multilateral investigation by credible experts representing a wide range of countries is yet to be completed, it's clear that the Ukrainian leader is politicizing the Bucha incident by jumping to the conclusion that Russia was responsible and pressuring the international community to immediately act on that presumption. It's understandable that he's very upset about what happened, but Russia's questions need to be answered before making any moves. 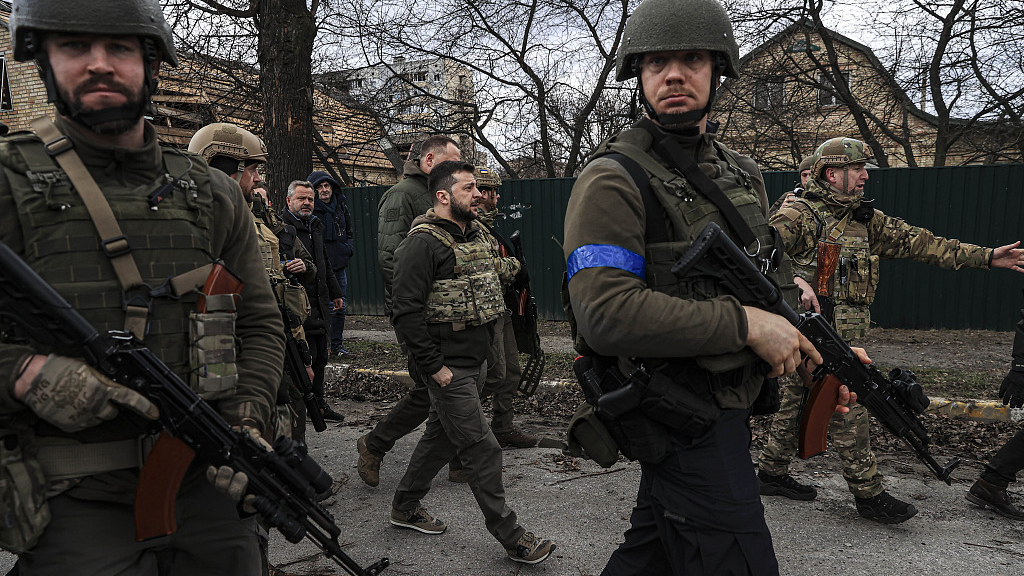 Ukrainian President Volodymyr Zelenskyy is accompanied by soldiers during his visit in Bucha, Ukraine, April 4, 2022. /VCG

Ukrainian President Volodymyr Zelenskyy is accompanied by soldiers during his visit in Bucha, Ukraine, April 4, 2022. /VCG

The culprits must be brought to justice as soon as possible, but that can't happen without the investigation. Nor, for that matter, can the UNSC legally take action until such an investigation is completed.

Nevertheless, countries like France and Germany have already expelled large numbers of Russian diplomats reportedly in partial response to the Bucha incident as well as espionage allegations against those same officials.

As Zhang Jun, China's permanent representative to the United Nations, said at the UNSC meeting last night, the specific causes of the incident must be ascertained. The contrasting accusations leveled by Ukraine and Russia are very serious but neither should be taken for granted at this point.

It isn't fair for anyone to act on the basis that one or the other side's interpretation of events is what truly happened until an impartial investigation is carried out. Reacting before that happens only risks triggering yet another escalation spiral in this very dramatic conflict that's already rapidly transforming the world order in very unpredictable ways.

The renewed calls that this incident prompted from the U.S.-led West to impose even more sanctions against Russia also show that certain stakeholders have more of an interest in advancing their own geo-economic agenda than in ensuring that justice is served. This isn't a fluke but consistent with their approach toward similar such scandals like the numerous chemical weapons ones in Syria. Alleged war crimes are amplified not in pursuit of justice but in order to establish the pretext for political provocations.

As it stands, apart from the real responsible few, nobody knows for certain who's responsible for slaughtering those people whose bodies just appeared in Bucha. Calm and objective reporting on this issue is the need of the hour yet it's presently unclear whether this will happen, let alone if an impartial investigation will be commenced or even successfully completed if it is.

For the time being, all sides should avoid politically exploiting the incident out of respect for the victims and their loved ones.