Download
Why over 200,000 Chinese sturgeons have been released into the Yangtze River
By Xing Fangyu 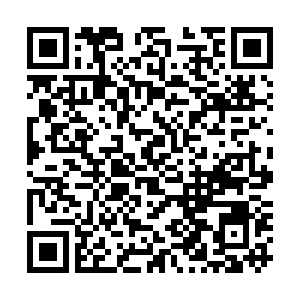 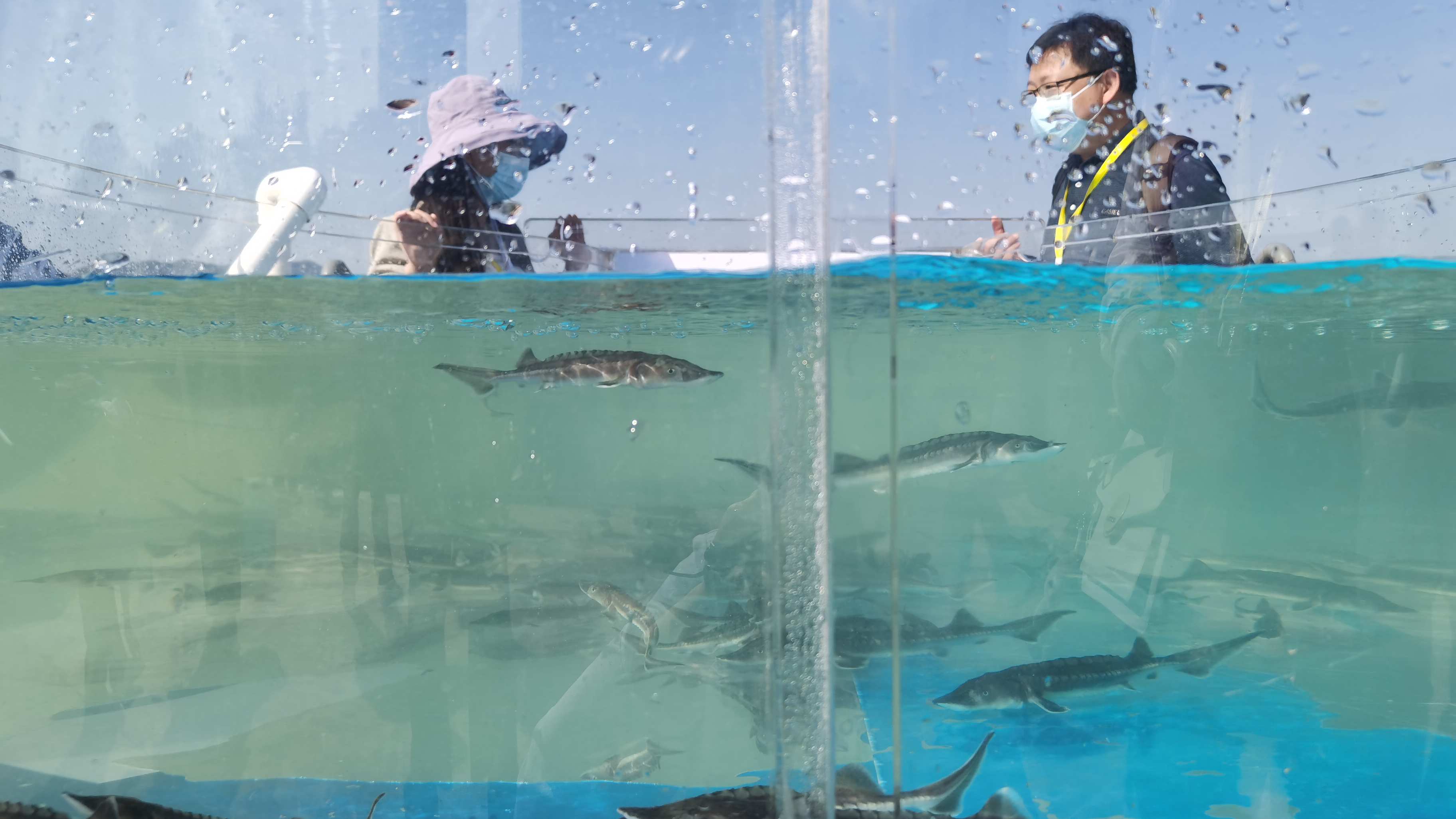 Over 200,000 artificially bred Chinese sturgeons were released into the Yangtze River on Saturday as part of a project to conserve the critically endangered species.

The sturgeons were bred by the Chinese Sturgeon Research Institute of China Three Gorges Corporation (CTG). The release – off Yichang City in central China's Hubei Province – was the second on such a large scale since the Yangtze River Protection Law took effect on March 1 last year.

The fish is considered a national treasure, like the giant panda, but its population in the wild is on the edge of extinction. According to Jiang Wei from the Chinese Sturgeon Research Institute, releasing the artificially bred fish into the river on this scale could have a positive impact on the recovery of the species.

From 1984, when the releasing was first conducted, until today, nearly 5.3 million sturgeons have been released into the Yangtze by the Chinese Sturgeon Research Institute. But several decades of hard work have seen little reward so far. 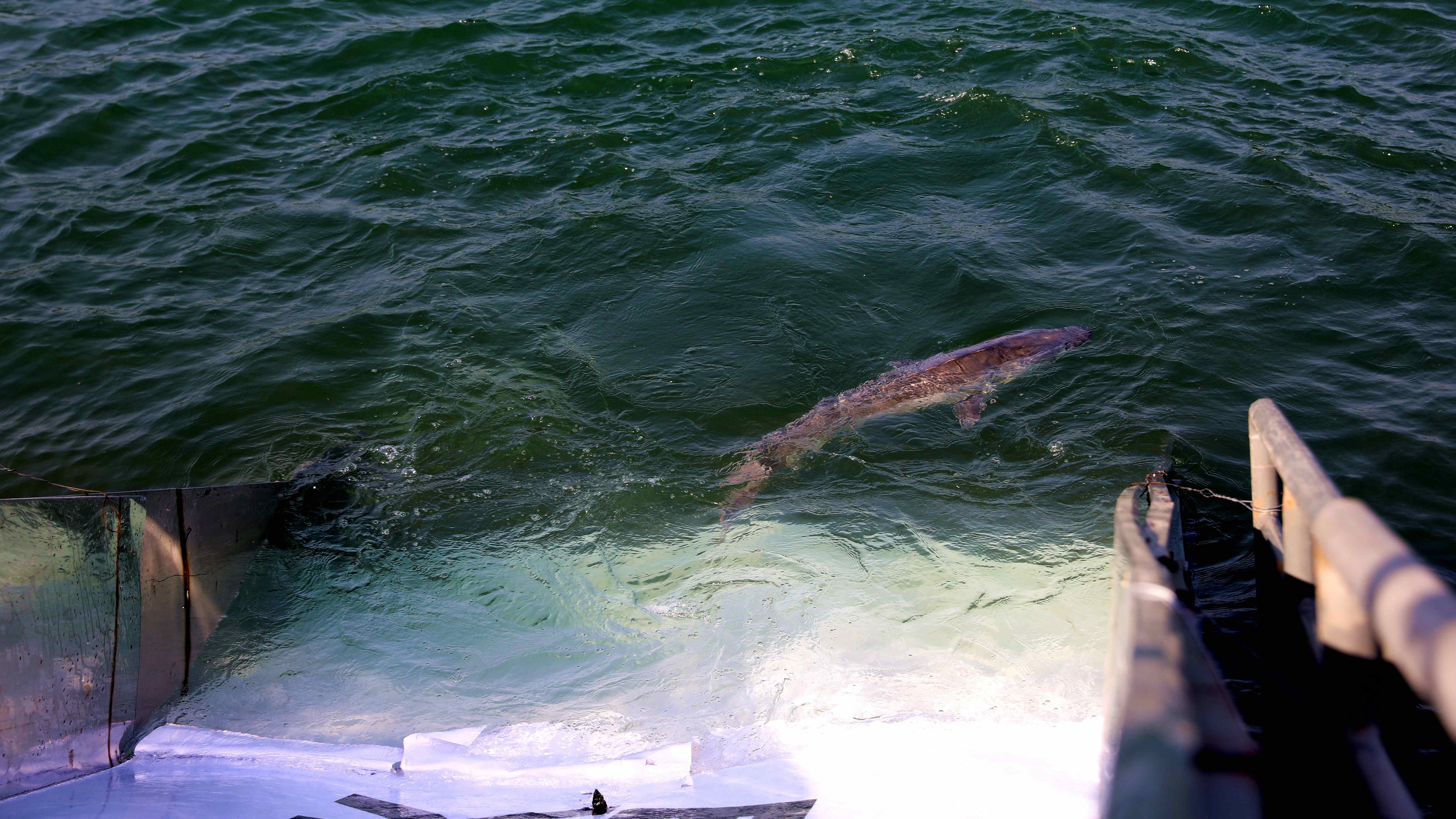 "For now, we haven't seen any obvious effect because the released number needs to be expanded and increased, and the whole natural environment (of the river and sea) also needs to be improved," said Jiang, who has studied the Chinese sturgeon for years.

Questions have been raised about whether artificial breeding can save the species. Over 200,000 Chinese sturgeons look like a big quantity, but considering the natural survival rate, only a small number of sturgeons may successfully reach the sea and migrate back to reproduce.

Chinese sturgeons can live for 40 years. The fish head to their spawning beds in the Yangtze River in autumn to lay their eggs. After five to six days, the fertilized eggs grow up and become fish, then they swim all the way down to the sea to spend most of their lives. It is only when the sturgeons reach sexual maturity at the age of about 14 that they start to migrate back to rivers for procreation. 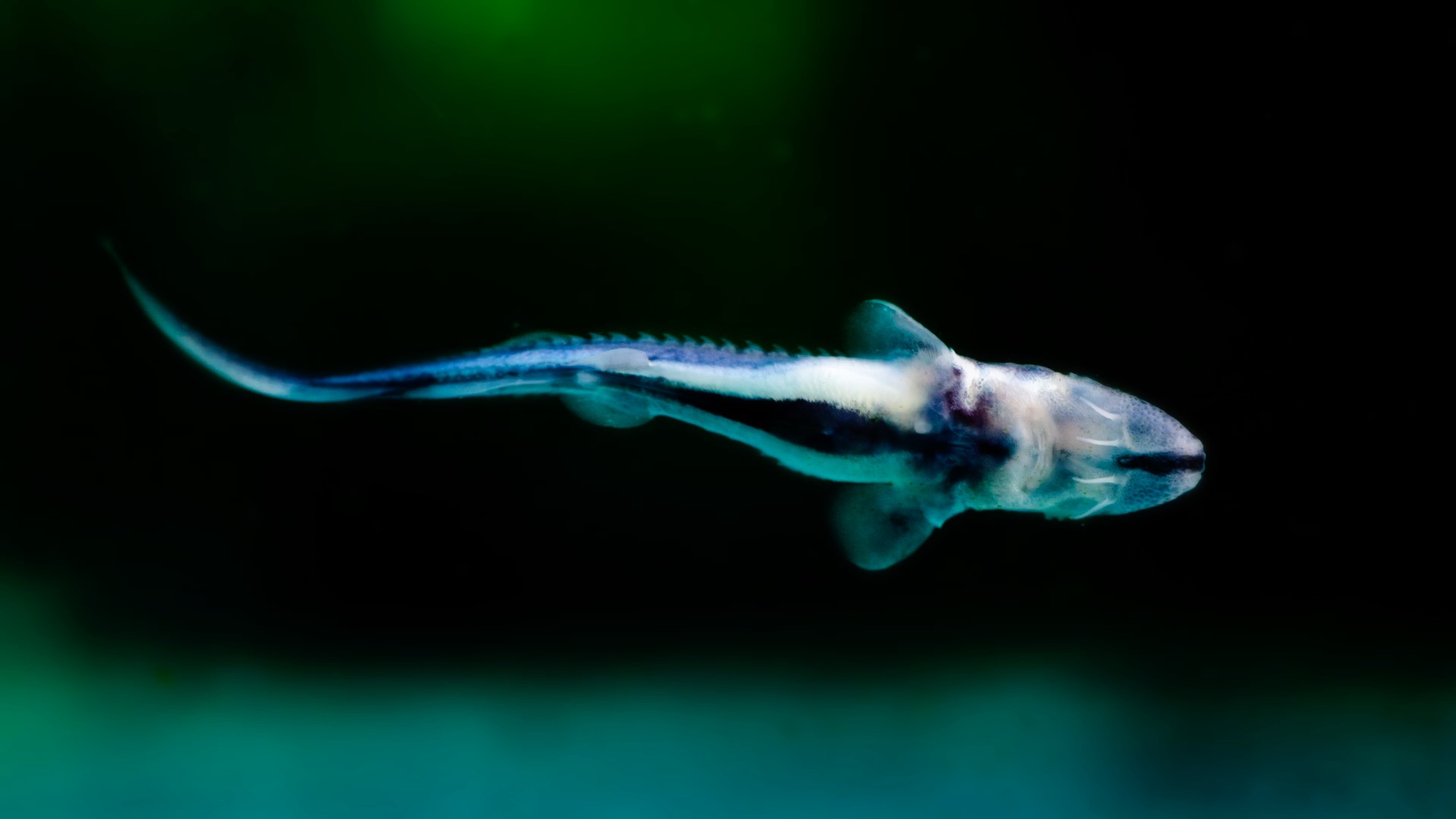 The released Chinese sturgeons face an arduous journey between river and sea and back. In the beginning, researchers sought to trace them by rudimentary methods. They tagged the fish with a simple card, Jiang said, and had to wait for fishermen to call the phone number left on the card when the fish was captured.

But more recently, modern technology has been deployed, including sonar tagging, DNA, and PIT (passive integrated transponder) tagging along with T tagging (phone and code numbers). With these new tracking methods, researchers can collect a lot more data.

The artificially bred sturgeons migrate to the ocean in much the same way as their naturally bred counterparts. Once they are released, most of them head directly downstream and arrive in the East China sea. The bigger the sturgeon is, the higher the chances it can survive the journey. Data in 2019 showed  that 73.3 percent of sturgeons successfully reached the sea. Experts can only wait and hope that the fish are able to grow and return to the river to lay eggs. 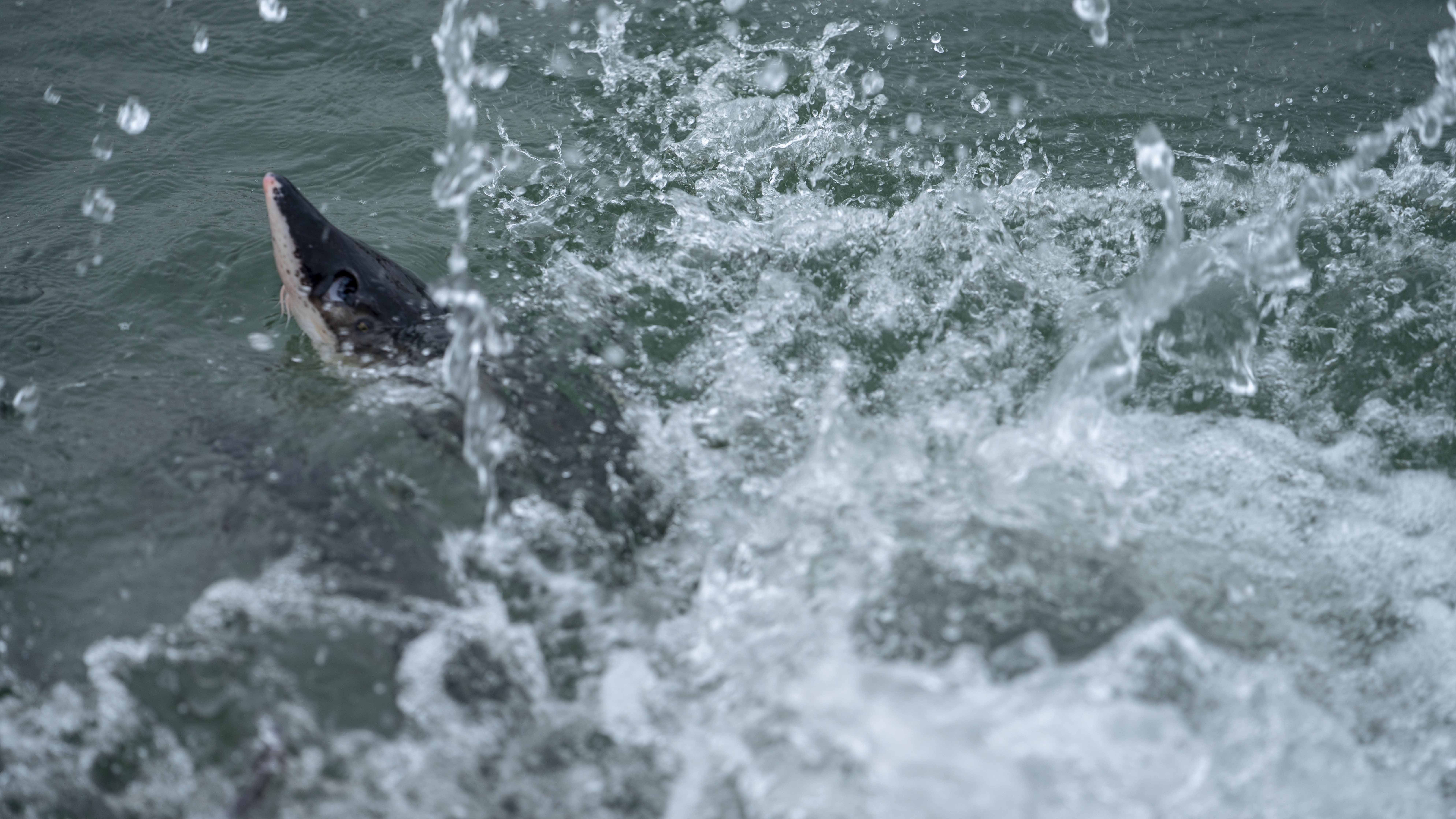 A Chinese sturgeon is released into the Yangtze River, April 2021. /CTG

A Chinese sturgeon is released into the Yangtze River, April 2021. /CTG

No wild eggs, but hope remains

But they were disappointed. For the past five years, no sign of natural reproduction of the species has been recorded. Another difficulty is that the marine area is black, hampering the study of the habits of their subjects, which remain mysterious.

Jiang has started a long-term project that involves putting satellite tags to study the marine inhabitation history of Chinese sturgeons. By tracking the tagged sturgeons and collecting data, he hopes to find more about the fish's life in the vast ocean and see if any differences exist between life there and in freshwater.

The oldest trackable Chinese sturgeon released is 9 years old now, according to Jiang, and researchers have to wait another 5 years until it can reach sexual maturity and migrate back to the river. Until then, they hope to find out more about the species' behavior. 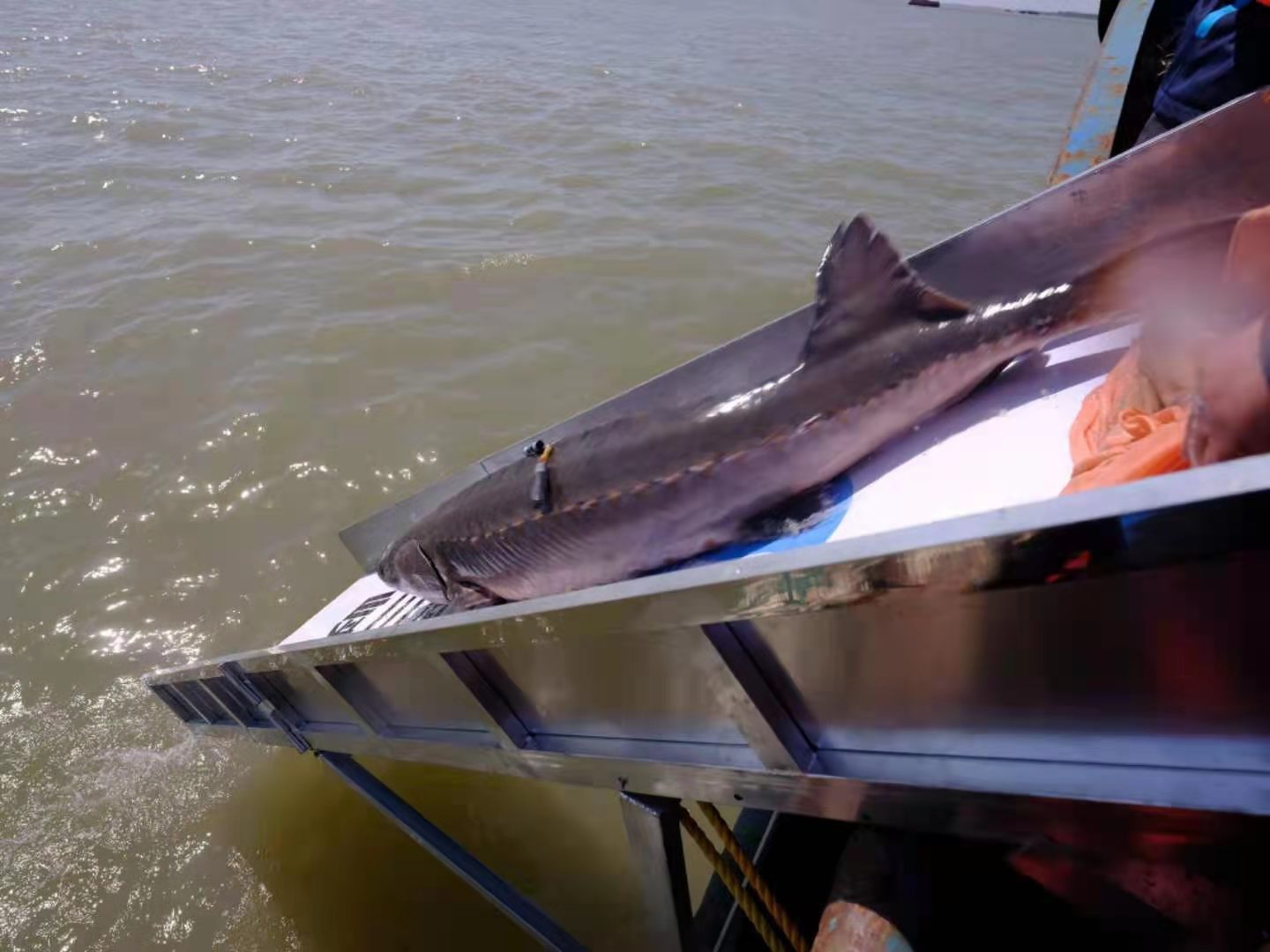 A Chinese sturgeon carrying a tracker is released into the water, April 2021. /CTG

A Chinese sturgeon carrying a tracker is released into the water, April 2021. /CTG

Other aquatic creatures have also declined in numbers during the period. "The Chinese sturgeons used to be widely distributed in many areas, such as the Yellow River, and the Pearl River, but the species can only be found in the Yangtze River now. Not only the Chinese sturgeons, but many other species also show a decline in the same period," Jiang said.

A year after the Yangtze River Protection Law was implemented, other endangered species such as Yangtze finless porpoises have been spotted more often. The law is considered to offer a good chance to recover the river's fish stocks, including the Chinese sturgeon.