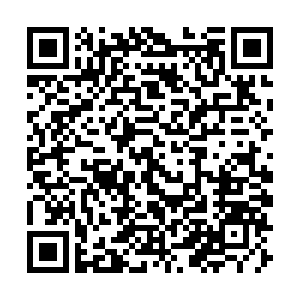 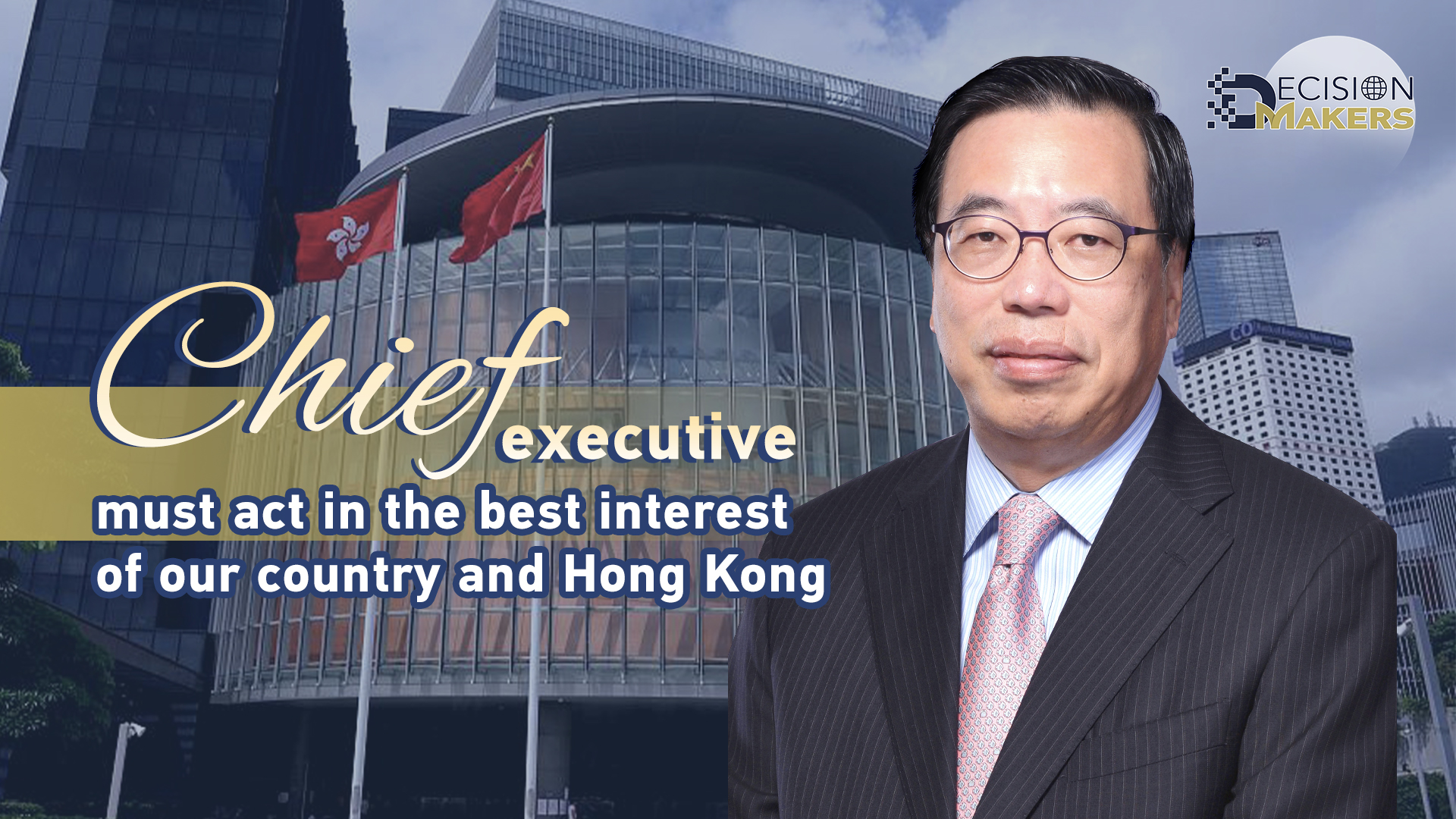 The sixth-term Chief Executive (CE) election will be held on May 8, 2022. As the incumbent CE Carrie Lam Cheng Yuet-ngor has announced that she would not seek for the second term of office, which I fully respect her decision and am profoundly grateful for her dedication and commitment to serving the people of Hong Kong in the past five years, Hong Kong sets to elect a new leader.

While I am certain that the upcoming CE election will continue to be conducted in a fair, open and impartial manner, I share the same belief with everyone who loves and cares about the future of our home that the next CE will be a patriot who performs the duties faithfully in safeguarding the best interest of Hong Kong and our country.

This would be impossible without the decisive actions from the central authorities in the past two years. In addition to the passage of The Law of the People's Republic of China on Safeguarding National Security in the Hong Kong Special Administrative Region (HKSAR) by the Standing Committee of the National People's Congress (NPC) on June 30, 2020, which quickly restored governance and social stability in Hong Kong from the state of chaos, the NPC passed the decision on improving the electoral system of the HKSAR on March 11, 2021 to plug the loopholes in the former electoral system and ensure faithful implementation of the principle of "patriots administering Hong Kong.

Upon the decision, the NPC Standing Committee was authorized to amend the Basic Law Annexes I and II on the method for selecting the CE and the method for the formation of Legislative Council (LegCo") and its voting procedures. Members of the sixth LegCo worked dutifully and expeditiously to deliberate the Improving Electoral System (Consolidated Amendments) Bill 2021 and took forward the amendment exercise of local electoral legislation in accordance with the amended Annexes I and II to the Basic Law. With the support of LegCo members, the bill was passed on May 27, 2021, enabling the smooth conduct of the Election Committee (EC) subsector elections on September 19, 2021 and the LegCo general election on December 19, 2021 respectively.

Despite the postponement of the CE election due to the severe COVID-19 pandemic situation, the successful conduct of the upcoming election under the improved electoral system will mark another milestone in Hong Kong's constitutional development.

Under the improved electoral system, the EC plays an important role as a vigilant gatekeeper to nominate CE candidates and elect the best candidate to the top office. The reconstituted EC, which has increased the number of sectors from four to five and expanded the membership size from 1,200 to 1,500, achieves broader representation and balanced participation. Any aspirant who wishes to run for the office of CE is required to obtain nominations from not less than 188 EC members, with at least 15 nominations from each of the five sectors. This requirement provides a stronger safeguard for nominating CE candidates who can gauge the support across sectors and represent the overall interest of Hong Kong.

In addition, the establishment of the Candidate Eligibility Review Committee (CERC), comprising principal officials of the government and a number of community leaders, provides a systematic and institutional safeguard to ensure that the CE election candidates meet the standards expected of patriots. The Committee for Safeguarding National Security of the HKSAR will first decide whether a candidate complies with the legal requirements and conditions for upholding the Basic Law and bearing allegiance to the HKSAR, and issue an opinion to the CERC for those who do not comply with the legal requirements and conditions. The eligibility of candidates in the CE election will have to be assessed and validated by the CERC.

The sound and well-thought nomination and validating mechanisms will be able to ensure that the qualifications of the CE election candidates are in conformity with the Basic Law and other relevant legal provisions, which is imperative to elect a staunch patriot as CE who is faithful in safeguarding the constitutional order of the HKSAR as enshrined under the Basic Law and the steadfast and successful implementation of "One Country, Two Systems." This is the cornerstone for the long-term prosperity and stability of Hong Kong.

Expectations on next CE to turn challenges into opportunities

The fifth wave of COVID-19 has dealt an unprecedented blow to people’s livelihood and health, as well as the economy of Hong Kong. More than ever, we need a determined and committed leader who is capable of turning challenges into opportunities and enhancing our competitive edge in the post-pandemic era. 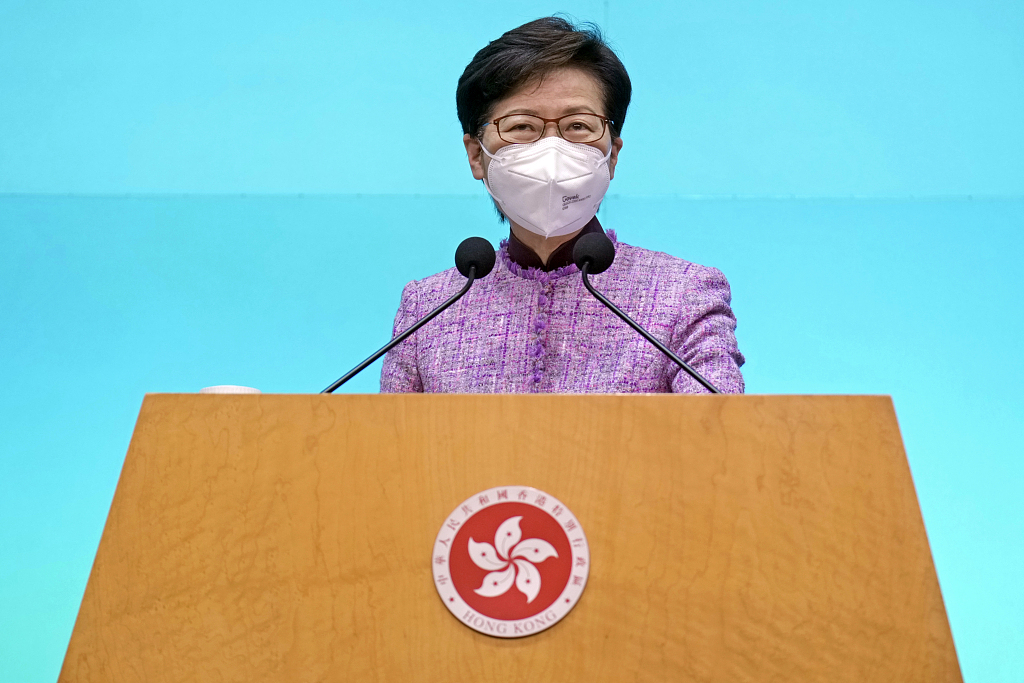 While I highly commend Lam's unfailing efforts in serving the people of Hong Kong in her 42-year of public life, especially as CE in the past five years, her successor will inherit the solid foundation of which generations of Hong Kong people have built and lead us to scale new heights.

Xia Baolong, director of the Hong Kong and Macao Affairs Office of the State Council, has shed some light on the qualities that the city's governing team should possess and laid out five expectations: being staunch patriots who are competent in fully and faithfully implementing "One Country, Two Systems" in Hong Kong; having strategic thinking and a broad vision to resolve tensions and tough problems with a strong sense of responsibility; serving the public with practical actions; rallying and uniting all sectors for the development of Hong Kong; and acting in the best interest of the country and Hong Kong and performing duties faithfully. Xia's remarks did not only reflect the aspirations of state leaders on the next CE and the governing team, but also anticipations from every one of us in Hong Kong.

Despite Hong Kong's renowned status as a world-class city, we must not deny that we have been facing a range of tensions and deep-seated problems in the course of development, from housing, healthcare, youth development to income disparity and the need for economic diversification. The incumbent government has mapped out long-term initiatives such as Northern Metropolis Development Strategy and 10-year Hospital Development Plan. The next CE must lay out the vision to tackle the long- standing issues and provide new impetus to our economy, canvass public support and carry out the plans with a strong sense of responsibility and commitment.

Meanwhile, the future of Hong Kong is deeply connected with national development. Only by integrating into national development and enhancing our unique role in the country's dual circulation economic strategy, we can bring continuous impetus to our economy. The next CE must possess strategic thinking and a broad vision in formulating policies to reinforce and enhance our strengths while seizing the opportunities arising from the national 14th Five-Year Plan, the Belt and Road Initiative and the rapid development of the Guangdong-Hong Kong-Macao Greater Bay Area, in order to leverage Hong Kong's advantages and meet the country's needs.

Stabilizing the pandemic situation and guiding Hong Kong through the road of economic recovery are the top priorities of the incoming government. While many local businesses, in particular small- and medium-sized enterprises, are in dire straits, the livelihood of the general public is under immense difficulties as a result of mounting unemployment rate and inflation pressure. The next CE must firmly grasp the social sentiment and the overall situation of Hong Kong, and deliver practical and substantial measures to help the public to tide over the short-term difficulties and bring our economy back on the right track.

It is no easy task to administer Hong Kong and that cannot succeed without the trust and support of the public and concerted efforts from the entire community. Therefore, the next CE must lead by example to reach out to different sectors proactively, listen to diverse views patiently, accept criticisms humbly, solicit public support and achieve consensus tactfully for the best interest of the society.

As the legislature of the HKSAR, the LegCo has a unique role under the constitutional order as enshrined in the Basic Law. The seventh LegCo, with a new composition and an expanded membership size to 90 under the improved electoral system, has entered a new era with the return of long-awaited rationality and order. The efficiency of its meetings has also been improved significantly.

As president, I am confident that the LegCo will, as in the past, continue to fulfill its constitutional responsibilities of monitoring and cooperating with the government in the administration of Hong Kong. For the common goals of improving people's livelihood and achieving good governance, all LegCo members will join hands with the next CE and the governing team to maintain a positive and interactive executive-legislative relationship with checks and balances.

With the nomination period of the CE election coming to an end soon, I look forward to a smooth and successful CE election during which a patriotic and capable leader will be elected. For a brighter future of Hong Kong, we must stay united, put our faith in the next CE and support the new-term government.