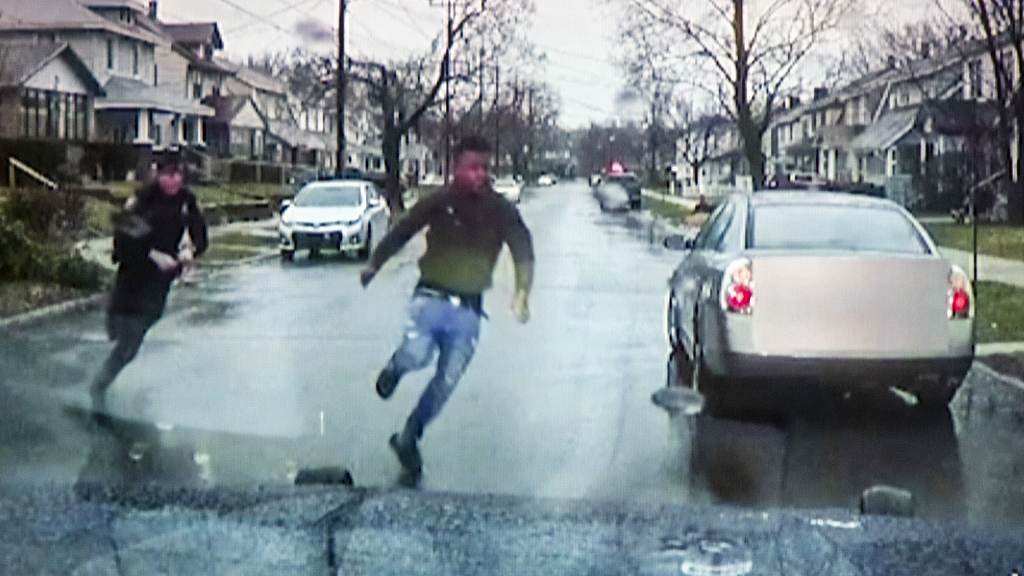 A screenshot from a TV display which shows video evidence of a Grand Rapids police officer struggling with and shooting Patrick Lyoya at Grand Rapids City Hall, April 13, 2022. /CFP

A screenshot from a TV display which shows video evidence of a Grand Rapids police officer struggling with and shooting Patrick Lyoya at Grand Rapids City Hall, April 13, 2022. /CFP

The parents of a Black man shot dead by a white police officer said Thursday they had fled war in DR Congo only to discover a "genocide" in the United States, and called for the officer to be prosecuted.

Patrick Lyoya, 26, was killed during a traffic stop in the city of Grand Rapids, Michigan on April 4, the latest in a series of Black people dying at the hands of police in the United States that has ignited widespread protests against racism and demands for reform.

Police have released four videos from the incident, one of which shows the officer - who has not been named - lying on top of Lyoya as the two scuffled, and then appearing to shoot him in the head.

At an emotional press conference, Ben Crump, attorney of the Lyoya family, blasted what he called an "unnecessary, unjustifiable, excessive use of fatal force" that saw the officer "escalate a minor traffic stop into a deadly execution."

He said the family wants the officer to be identified, fired and prosecuted.

The officer is on paid leave while state police investigate whether to bring charges, authorities have said.

"I thought that I came to a safe land," she said through tears. "Now my son has been killed with bullets."

"I didn't know, I didn't believe that in this country there was a genocide," said Lyoya's father, Peter.

Crump, who has taken a leading national role in advocating for Black victims of police violence, thanked police for their transparency in releasing the videos.

He said the officer had failed to follow basic training and had carried out multiple instances of violence against Lyoya, a father of two and the oldest of six siblings, who was "simply trying to get away."

Dozens of protestors had gathered late Wednesday in Grand Rapids after police released the videos of the shooting.