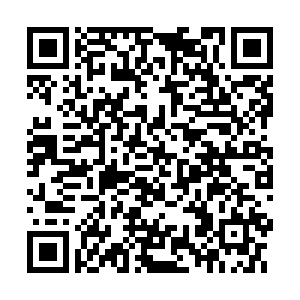 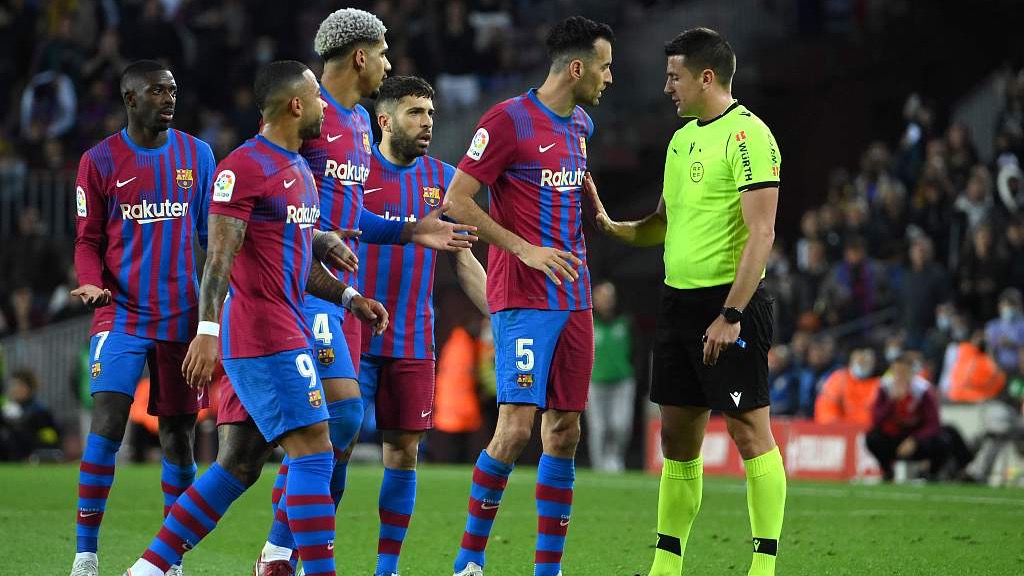 Barcelona players complain to the referee during their clash with Rayo Vallecano at the Camp Nou stadium in Barcelona, Spain, April 24, 2022. /CFP

Barcelona players complain to the referee during their clash with Rayo Vallecano at the Camp Nou stadium in Barcelona, Spain, April 24, 2022. /CFP

Barcelona suffered a shock 1-0 defeat by Rayo Vallecano on Sunday, handing Real Madrid the chance to win La Liga if they draw at home to Espanyol next weekend.

Barca's place in the top four is still not secure either after a third consecutive defeat at Camp Nou continued their late-season wobble and saw them squander the chance to pull away in the race for Champions League qualification.

Madrid remain 15 points clear with five games left to play and while Barcelona have a better head-to-head, Carlo Ancelotti's side know they will be uncatchable if they take just a point from Espanyol on Saturday at the Santiago Bernabeu.

Barcelona should still have enough for the top four given they sit six points clear of Real Betis in fifth, with five games left to play, but winning this game in hand against an out-of-form Rayo side would certainly have made the run-in more comfortable.

"There are games that get complicated because we don't start how we should," said Xavi. "It's a shame because it was a golden opportunity."

Instead, their form, as much as their position, will be a real concern for coach Xavi, whose team have now won only twice in their last six matches.

This loss comes after they were beaten at home by Eintracht Frankfurt in the Europa League quarter-finals and then defeated by Cadiz in La Liga, also 1-0.

"We're struggling a lot at home," said Sergio Busquets. "We're in this negative dynamic at Camp Nou. We have a cushion and we had a chance to take advantage but we haven't managed it." 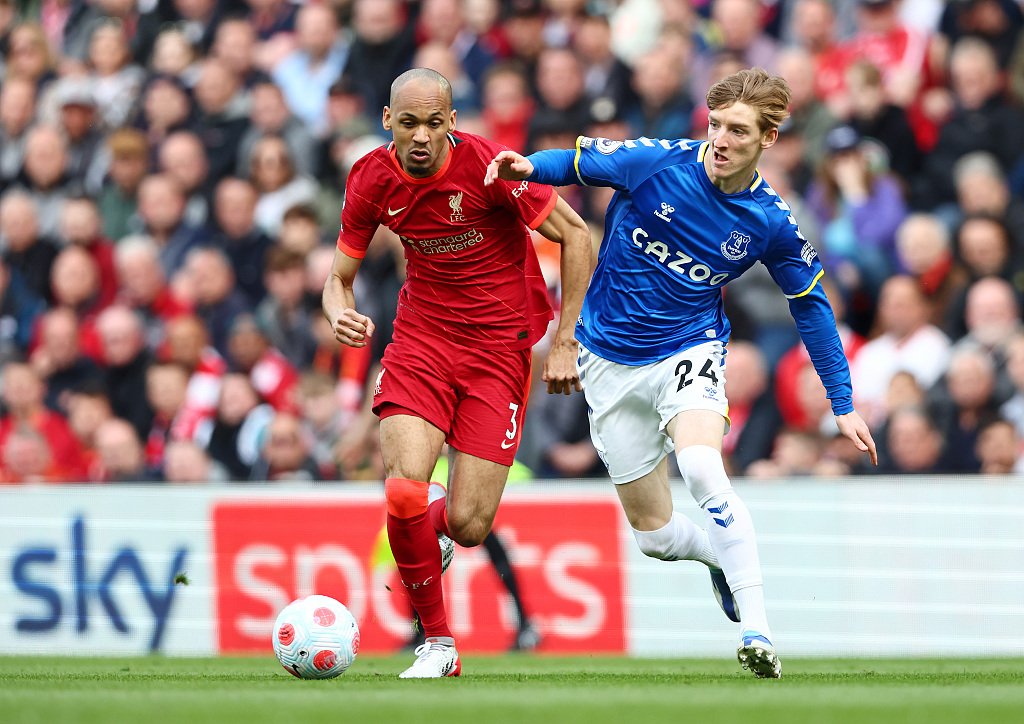 Fabinho (L) of Liverpool is challenged by Anthony Gordon of Everton during the Premier League match between their clash at Anfield in Liverpool, England, April 24, 2022. /CFP

Fabinho (L) of Liverpool is challenged by Anthony Gordon of Everton during the Premier League match between their clash at Anfield in Liverpool, England, April 24, 2022. /CFP

In England, Liverpool kept the pressure on Manchester City at the top of the Premier League table and pushed local rivals Everton towards relegation with a 2-0 win in the Merseyside derby.

The Toffees' day got off a terrible start even before a ball was kicked at Anfield as Burnley's 1-0 win over Wolves dumped Everton into the relegation zone.

Second-half goals from Andy Robertson and Divock Origi ensured they remained there despite a spirited display in a feisty encounter.

A 12th consecutive home league win for Liverpool cuts City's lead at the top of the table back to one point with five games remaining.

"Thank God a football game has two halves," said Liverpool boss Jurgen Klopp.  "I'm really happy because it isn't about flying every week, it is about getting results."

Everton have still not won away from home in the league since August, but they dispelled criticism of being a soft touch away from Goodison Park by showing the fight they will need in the remaining six games to maintain their 68-year stay in the top-flight.

In stark contrast to Manchester United's capitulation in losing 4-0 at Anfield in midweek, Frank Lampard's men at least managed to make the Reds earn the three points.

"The important thing is to stick with it. The attitude and the way the lads stuck to their task today was really, really good," said Lampard, despite his side enjoying just 17 percent possession. 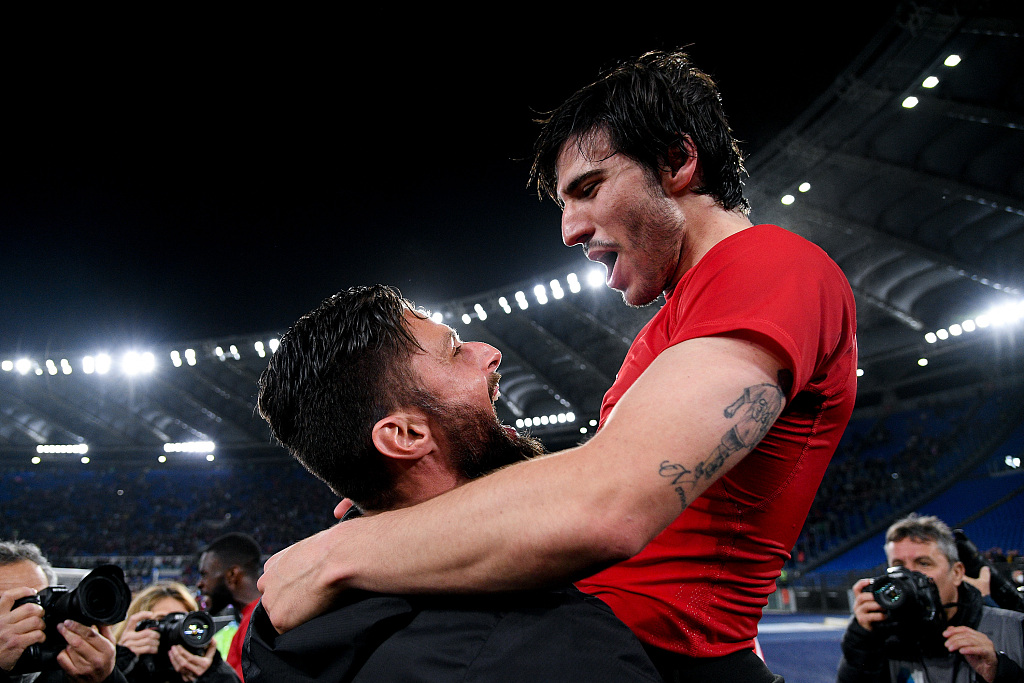 In Italy, Sandro Tonali scored in stoppage time as AC Milan came from behind to win 2-1 at Lazio and retake top spot from Inter Milan in Serie A, while Napoli's title hopes appear over after their meltdown in Empoli.

They moved back two points above of Inter, who beat Roma 3-1 on Saturday and have a game in hand Wednesday away to Bologna. Inter also knocked Milan out of the Italian Cup semi-finals in midweek.

Ciro Immobile became the leading active scorer in Italy's top flight when he turned in a cross from Sergej Milinkovic-Savic inside four minutes.

The Italy international's 181st Serie A goal took him past veteran Sampdoria striker Fabio Quagliarella as Immobile extended his league-leading haul for the season to 26.

But Giroud poked in from after excellent work from Rafael Leao, and Milan won it at the death as Zlatan Ibrahimovic nodded across for Tonali to force home following a poor defensive header by Francesco Acerbi.