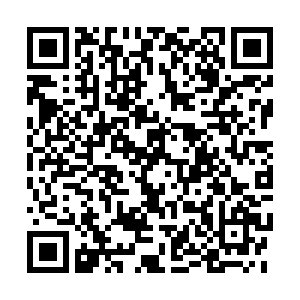 Jessica Andrade’s strawweight return being the main event of this particular UFC Vegas card is something of a backhanded compliment. The UFC has always known how to program and counter-program its schedule and the organisation is such a force these days that quite often its boxing and smaller MMA promotions that have to work around them.

In this unique case, spread across the weekend was Bellator MMA’s stacked two night return to Hawaii and Tyson Fury’s world heavyweight championship boxing match against Dillian Whyte at Wembley Arena in London. Faced with such overwhelming competition, it’s clear that the UFC has put on what it thinks is its least enthralling main event.

Andrade, who made the move back down to the 115lb division where she once held the belt following an unsuccessful run at flyweight champion Valentina Shevchenko, is an unsung legend of women’s MMA. With a 22-9 record that has wins over Raquel Pennington, Jessica Penne, Claudia Gadelha, Rose Namajunas and many, many more besides, she’s become the female Rafael dos Anjos: a fighter with a lot of impressive victories who has never managed to truly crack the big time.

This is important for her opponent Amanda Lemos too. Ranked 10th in the strawweight division, for her to progress through the ranks up to a hypothetical bout with current champion Namajunas, or whoever would hold the belt if she gets to the top, she needs experience in five round fights, and getting it now, in a fight where the biggest stakes are moving up a spot or two in the top 10 and the crowd is only a few hundred at the UFC Apex, is better than crumbling under the pressure  in front of thousands in attendance, millions watching at home, when the gold is on the line.

So, on paper, Andrade vs. Lemos seemed like a good fight but not something worthy of being a main event. Then the opening bell rang. 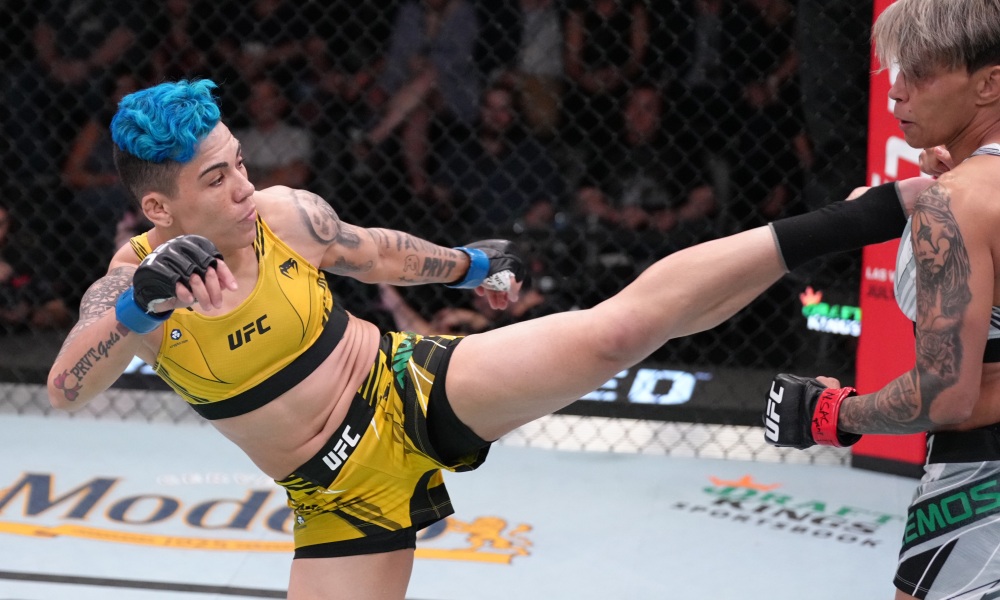 Andrade quickly showed how much she has matured since tangling with Shevchenko. No longer rushing like a bull in China shop, nor swaying like the idle animation of Eddy Gordo from Tekken, Andrade was considerably calmer and more thoughtful, and yet she hadn’t lost the aggression that had took her so far.

She showed patience, waiting to see what Lemos had. For a minute, Lemos walked Andrade down until she was hit by a hard leg kick. Rather than slow her down, it seemed to show Andrade how painful Lemos’ hardest hit could be, and from there she became aggressive, slowly. A leg kick of her own, then a high kick, then a pump kick - then it was a fight and Lemos took a wild swing in retaliation.

Previously, Andrade would have likely kept this standing, turned it into a melee, instead she went into the clinch, forced her rival up against the cage and locked in an arm triangle around Lemos’ throat.

Commentators Daniel Cormier, Dominick Cruz and Paul Felder, all former fighters, said the next thing to do would be sweep the leg, take Lemos to the ground and apply pressure horizontally. Instead Andrade did the opposite; she hooked the leg. This kept Lemos standing upright but somewhat pincered against the cage, leaving her with nowhere to go. 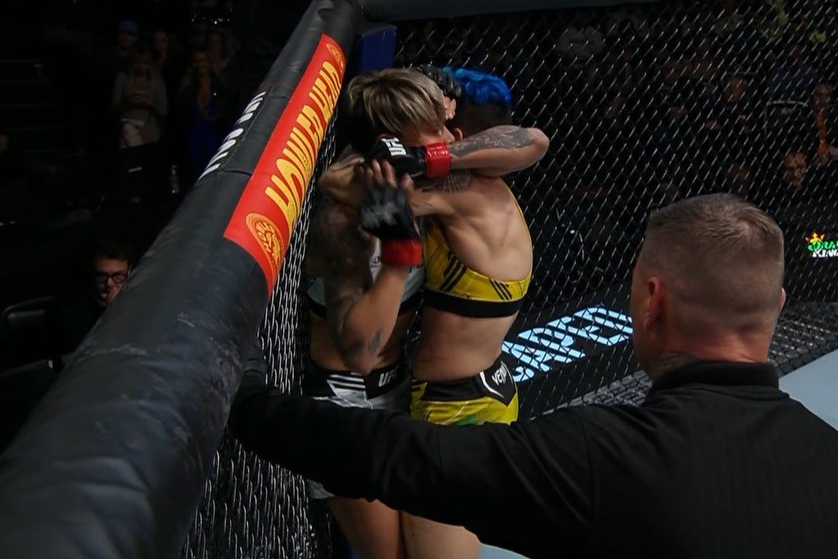 Andrade is known for being freakishly strong; it’s well known that at her gym in Brazil, she spars and drills BJJ with men rather than women. She showed that strength off here when, as Lemos started to panic, looking to escape, Andrade simply leaned backwards across the cage fence in the style of a standing alligator roll and pulled Lemos to the other side.

At this point referee Keith Peterson must have seen something bad in the eyes of Lemos. He called the fight off and made Andrade release the hold. He was right; immediately upon letting go, Lemos crumpled to the floor.

Jessica Andrade completed her return to strawweight with the first and only standing arm triangle submission in UFC history, and she did it in three minutes and 13 seconds. On paper, this fight may not have been worth a main event; in the Octagon, Andrade put on an undeniably main event performance.