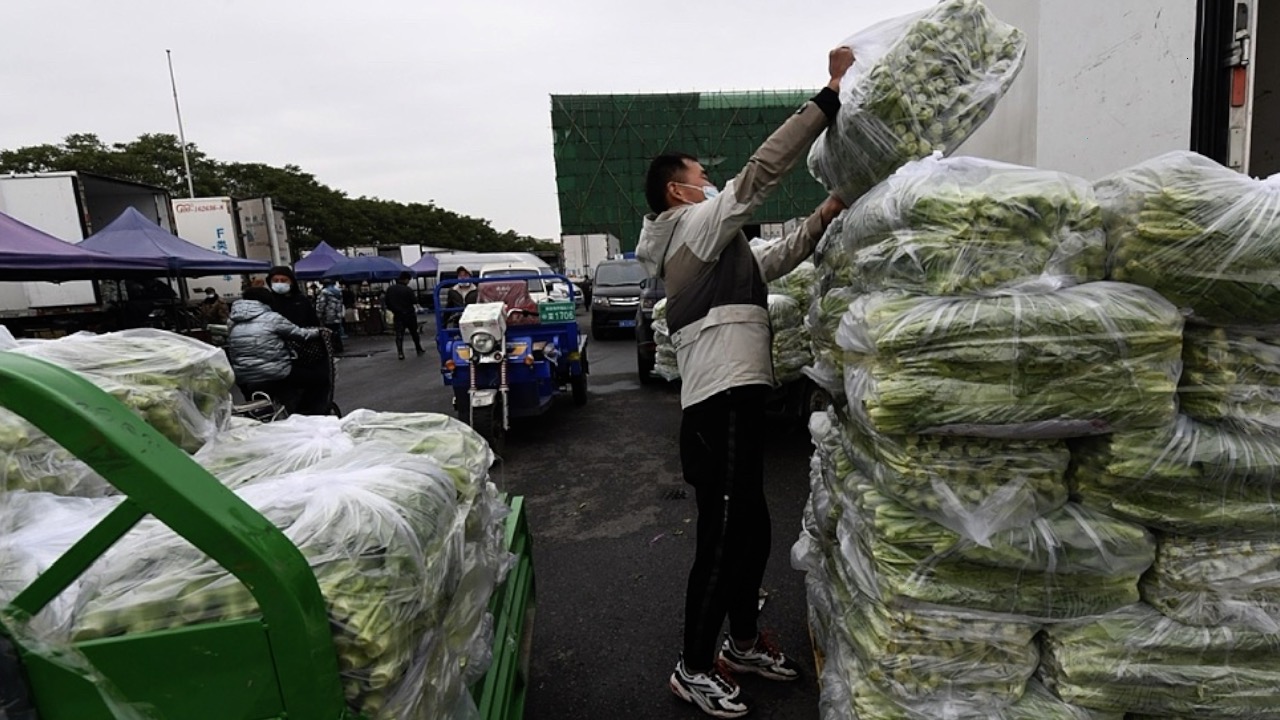 Demand soared in recent days, as many Beijing residents feared they would be asked to stay at home for a lengthy period of time to help curb the resurgence of COVID-19. However, thanks largely to the efficiency of one massive wholesale market in the city, confidence has been restored.

Xinfadi Agricultural Wholesale Market, in southwest Beijing, is the largest of its kind in the city.

The market had a turnover of 108 billion yuan, or 16 billion U.S. dollars, last year. It's the "go-to" place for most of Beijing's major grocery stores, markets, and restaurants, and provides 80 percent of food materials of the city.

As busy as it usually is, sudden fears in Beijing over Shanghai-style restrictions following news of a significant outbreak brought an even greater surge in demand this week.

Much of Shanghai, China's epicenter for COVID-19 in the latest nationwide outbreak, has been in lockdown for over a month as local authorities are bent on eliminating the virus. Beijing residents are on the edge as positive cases began to spread across the city since last week and soared to triple digits.

With the sudden demand, authorities looked to find a solution. By Wednesday, unprecedented supplies were reaching the market, helping to restore confidence.

"We provided nearly 25.8 thousand tonnes of vegetables on Wednesday, a record-high since the market was established 34 years ago. But from our observations, transactions have noticeably slowed. Supply has exceeded demand, which has also driven down prices. The weighted average price of vegetables on Tuesday was nearly 5.15 yuan a kilogram, or nearly 80 U.S. cents, but it has gone down by more than 20 percent, to 60 cents. Prices are back to normal," said Tong Wei, the Chief of the Communication Department of the market.

The vendors here were quick to notice the change.

One vendor says she sold about three trucks of tomatoes on both Monday and Tuesday, tripling her regular sales. "The price also went up by 15 percent. But today, there are much fewer buyers. Both sales and prices have gone down."

She says if there is a sudden surge in demand in the future, she can easily bring in more products.

"I have multiple production areas for tomatoes and they are all close to Beijing. I can easily deliver more tomatoes here as long as people need them, within one day."

"There's a lot of grain in my store. You can get it anytime you want. And this is just our small warehouse, we have much bigger storage space in the suburbs," another vendor says.

Xinfadi Market itself has very few concerns over supplies, even during a crisis. After three decades of operations, Tong says the market has full confidence in its processes and suppliers.

"Our market has built 2 billion square meters of standard farmland for production across the country, so even for one kind of vegetable, we have many production areas. We have also encouraged vendors to enhance the volume of vegetable picking and delivery to ensure supplies these days."

Tong added the market has stored 3,000-tonnes of long-lasting vegetables, such as onions, potatoes and white radishes. Also, his team works closely with check-points on the roads to Beijing, to speed up transportation. Meanwhile, production areas near Beijing will harvest more vegetables next month, which will further cut down the cost of logistics. Tong believes all these measures will ensure food supplies will continue to both meet demand and be affordable.