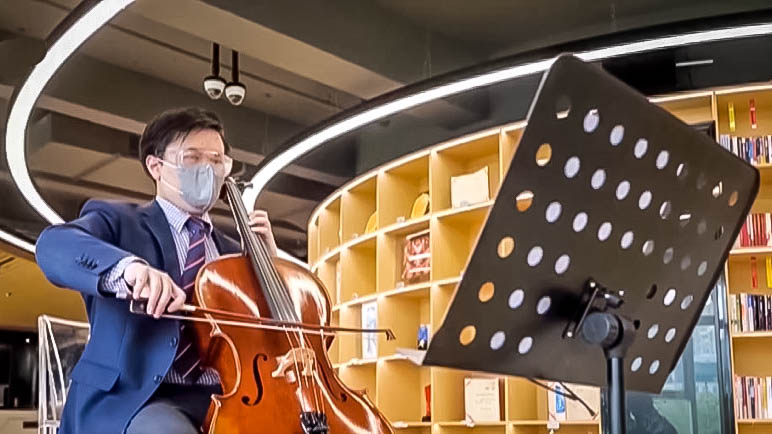 Zhang You has worked in the financial industry for almost ten years, and it is the first time he has slept in the office for more than a month.

At the end of March, his employer, a bank, was put under closed-off management due to a COVID -19 outbreak in Shanghai, a financial hub. Zhang and ten of his colleagues decided to move their beds to the office to maintain stable operations.

Zhang is in charge of the corporate division. Though some transactions can take place online, he said many things can be done only in the office.

"Capital flow is very important to companies," he explained. "The cash flow cannot be interrupted and that means the banking system is needed to finish financial transactions. Banks also have high standards for security, so many operations and services need to be finished at the counters."

Since the restrictions on movement were imposed, Zhang has helped a chipmaker complete cross-border payments and a biology firm to list on the STAR market, also known as the sci-tech innovation board, of the Shanghai Stock Exchange.

Though he acknowledged that his role was limited, Zhang said he was happy to contribute as COVID-19 has brought many economic challenges.

"We are glad to help because the transactions are paid to small and medium-sized companies in the supply chain," he said.

Zhang has some regrets, however, as he has to be away from his parents, with whom he lives.

"This experience is special; it may be a once-in-a-lifetime event, but I feel bad for my family too, because it's also important for me to be with them at home," he said.

At least 20,000 workers like Zhang are living in offices in Shanghai's Lujiazui financial district to maintain the stability of China's financial system.

Since March 1, the number of COVID-19 cases reported in the latest outbreak in Shanghai has reached some 550,000, the worst-hit city nationwide, pushing the metropolis of 25 million residents into closed-off management for more than a month.

With daily COVID-19 cases dropping in the past week, Shanghai is planning to accelerate the resumption of industrial activity. The city has said the second batch of companies eligible to restart production will be released soon.