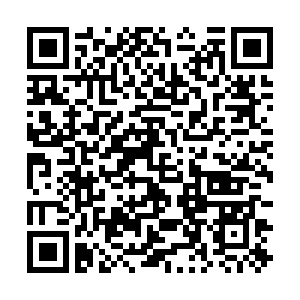 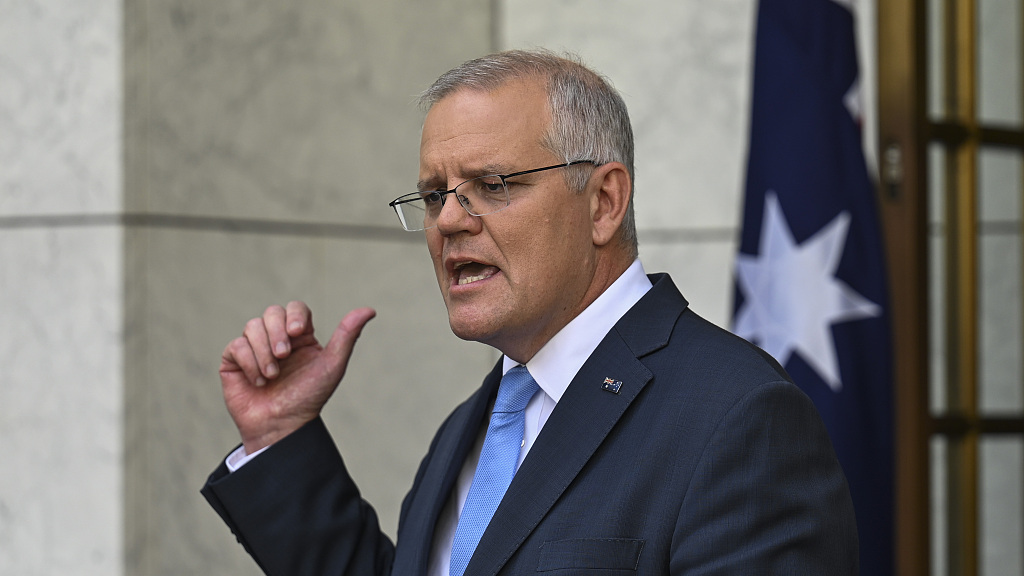 In yet another attempt to deflect criticism over the Liberal Party's inability to address Australia's economic challenges, Prime Minister Scott Morrison, at a press conference in Tasmania, warned about "Chinese interference" in the upcoming May 21 elections and propped up the national security threat to appease voters. However, opinion polls and voter dissatisfaction suggest that the PM is citing national security only as a desperate bid to stay in power.

Australian Prime Minister Scott Morrison has nothing constructive or productive to offer to the average Australian voter. In the dying stages of the Liberal Party's electoral campaign, the premier decried Chinese interference in Australian affairs as most polls indicate that the conservative coalition is heading for an imminent defeat in the upcoming election.

Most politicians would adopt a shrewder and pragmatic approach to overturn voter dissatisfaction but the truth is that with the Australian economy in a state of free fall, the administration has resorted to chest thumping on national security as a campaign strategy instead. It will not work.

At a press conference in Tasmania, Morrison claimed that "we are aware of the influence that China seeks to have in this country" and "there is a form of interference in Australia." Firstly, there is no evidence to suggest that China is seeking to interfere in the electoral process of another state beyond warnings from the Home Minister Karen Andrews.

Secondly, the claim is a poor response to China's confirmation that its actions in the region do not target third parties while urging Canberra to respect Beijing's sovereign decisions. Such statements are not resonating with the voters either, given that the Liberals are trailing the Labor Party as per latest opinion polls.

Morrison's persistence with deflecting domestic incompetence on international conspiracies, for example, has not changed his electoral standing as the opposition still leads the government by 53 percent to 47 percent as per a Newspoll survey published by the Australian newspaper. A separate opinion poll released by the Australian Financial Review place the Liberals at an even worse position of 45 percent to 55 percent against the opposition. 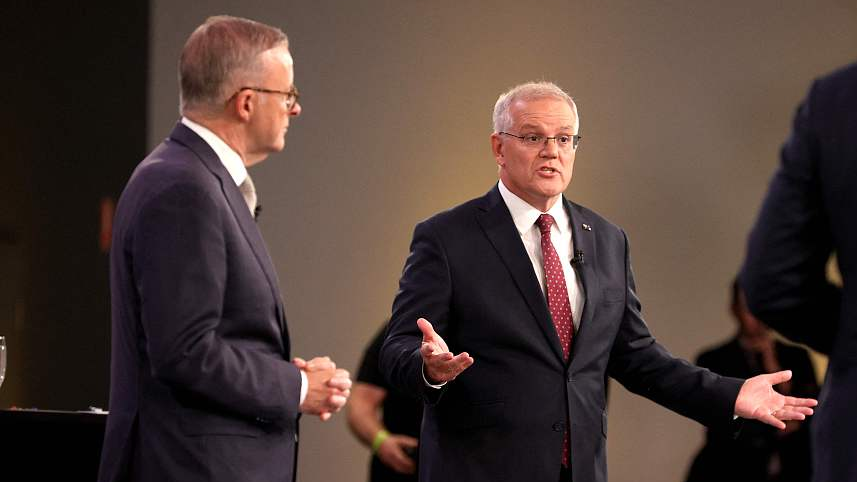 Australian Prime Minister Scott Morrison (C) and leader of the opposition, Anthony Albanese (L), participate in the first leaders' debate of the 2022 federal election campaign at the Gabba in Brisbane on April 20, 2022. /VCG

Australian Prime Minister Scott Morrison (C) and leader of the opposition, Anthony Albanese (L), participate in the first leaders' debate of the 2022 federal election campaign at the Gabba in Brisbane on April 20, 2022. /VCG

The reasons for this massive discontent are obvious. Note that in his numerous pressers, Morrison has not once spoken about any reform packages, legislation or wage growth incentives which could drastically improve the lives of average Australians. Note further that the country is not immune to supply side shocks or the rising cost of fuel due to the Ukraine crisis with Canberra recording the highest rate of inflation since the introduction of General Sales Tax in 2002.

Annual inflation figures have also touched a staggering 5.1 percent, with Australian farmers reeling from the Russian ban on fertilizer exports which rose by 19 percent in the first quarter of 2022, as per the Australian Bureau of Statistics. Australia's status of being a relatively wealthy nation can also not avert the inevitable rise of global costs of basic necessities, which is hurting the average consumer across the world.

Yet there has been no attempt by Morrison to challenge the counterarguments presented by the opposition. Instead, the Liberals are banking on a misguided belief that the demonization of China would translate into electoral gains. According to Natasha Kassam from the Lowy Institute, national security concerns are less likely to be a vote changer for the average voter, with data from Australia’s Vote Compass ranking national security and defense to be low on the priority list for citizens.

The interference card, however, has been constantly showcased not only by Morrison but also by Defense Minister Peter Dutton, who claimed that the Communist Party of China had picked their suitable party in the election despite China's long-standing policy of non-interference and neutrality. Chinese Ambassador to Australia Xiao Qian further confirmed this fact by saying that the upcoming election is a domestic affair in which China has no intention of getting involved in.

With an economy left vulnerable to supply chain shocks, the opposition Labor party is capitalizing on Morrison's hyper-nationalist approach by speaking about creating thousands of jobs in green energy transitions, revitalizing infrastructure projects and helping lower income people purchase properties. Morrison, on the other hand, has no suitable counter beyond brandishing the interference card. He is responsible for his own demise.