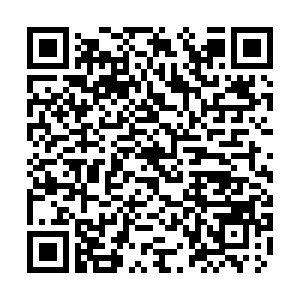 Jacob von Bisterfeld, a citizen of the Netherlands, settled in east China's Shanghai in 1992 and has been living in a community in the city's Songjiang District for the past 13 years.

His community has over 2,000 residents and everyone was told to stay home as closed-off management began in the western part of the city on April 1.

"Since we are going to be locked in, and since I haven't got much to do, I decided that I would like to help, because obviously there's work to be done," he told CGTN.

He then called his good friend Lu Yifan in the same building to ask whether the community needs more volunteers. That night, Lu brought him a uniform and told him: "We're going to do the first (round of) nucleic acid testing, and you can come and help."

Von Bisterfeld then joined a team of 150, designated to serve over 2,000 residents in the community.

In China, a residents' committee is usually the entity that directly serves residents and facilitates connection with higher-level of authorities. It usually has a dozen staff numbers, but that's obviously not enough when thousands of people in the neighborhood are confined to their homes and need to be served at their doorsteps.

Naturally, volunteers are desperately needed during such as time. Von Bisterfeld's community has over 100 volunteers helping this time, with him being the only foreigner.

"We were distributing rice and cooking oil and meat and all that," he said. "The first couple of days, people had their own provisions, but then people started to run out."

But luckily, the governmental provisions came at the right time. "I would say that the food passes were about every two or three days. I think they were adequate."

As for medication, von Bisterfeld said the residents would take a picture of the packaging and then volunteers would get the medicines for them.

As a retired professor, von Bisterfeld has been watching China's fight against COVID-19 closely. He often analyzes pandemic-related figures from the World Health Organization website.

"I had to do a bit of research on that because I had to divide every day the number of recorded deaths by the World Health Organization by the total population," he said. China's figures are absolutely the lowest in the world, but sadly the world seems reluctant to acknowledge this, he added.

"That hurts me personally because I know what Chinese people had to suffer with lockdowns in the early stages and the fantastic result that came out of that," he said.

Take his own community for example, residents were locked down for almost two weeks and then allowed to move around in the confines of their community since no case was reported during the lockdown.

According to the latest figures, some 60 percent of the people in Shanghai have been cleared to leave their communities as daily new cases continues to fall.

But the lifting of restrictions has not stopped von Bisterfeld's voluntary work. He is still helping the community in organizing regular COVID-19 tests since the city is still in a very critical stage of fighting the outbreak.

He said the whole experience has been thoroughly fulfilling as he's become more integrated into his community now. He used to be referred to by his title "professor," but now he's simply "Lao Luo."

"Many foreigners don't like to be called 'Lao' because they seems to think that it is a connotation of 'old,'" he said. "Now I don't want to be particularly old, but it is an honorific, honorable term."

He is just one of many foreigners who are volunteering in the city during this outbreak.

According to local authorities, there are over 200,000 foreigners living in Shanghai. Their efforts, although relatively small, are hugely welcomed by the locals as they continue their drive to defend Shanghai against COVID-19.