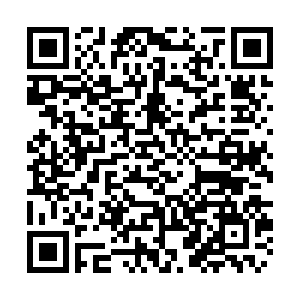 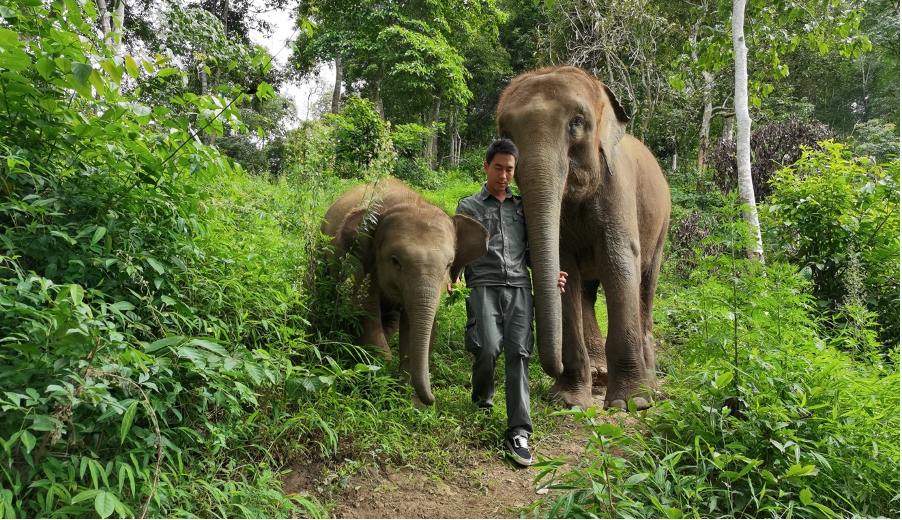 Editor's note: Every May, China awards a special medal – "May 1 Labor Medal" – to people who've made outstanding contributions in their line of work. CGTN reporter Yang Jinghao met one such individual in the southwestern province of Yunnan who's been recognized for his exceptional care of elephants.

Xiong Chaoyong starts his day by taking care of a group of elephants – checking their health, feeding them and taking them to nearby forests for field survival training. Among them, Ran Ran is the one he's given the most care and love to.

They met in 2005 when Ran Ran had just been rescued from the wild by the local forestry department having suffered serious injuries.

"I thought her chances of survival were slim back then. Some experts almost gave up on her and even proposed euthanasia," Xiong recalled. "But I thought we had an obligation to rescue her." 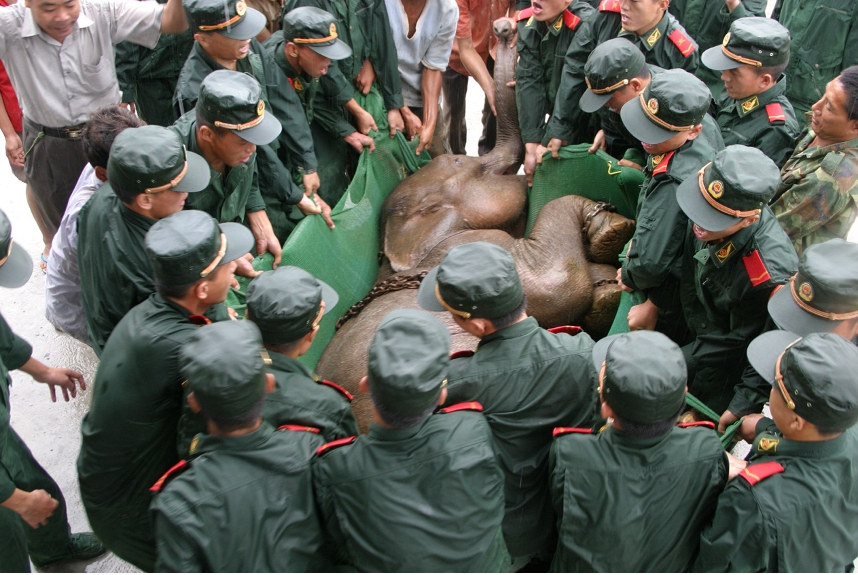 Ran Ran is transported for treatment after being rescued from the wild. /Asian Elephant Breeding and Rescue Center

Ran Ran is transported for treatment after being rescued from the wild. /Asian Elephant Breeding and Rescue Center

The Asian elephant is listed as "endangered" by the International Union for Conservation of Nature, and is under first-class state protection in China. Official data shows that the population of the species has grown to around 300 from some 180 in the 1980s. Apart from Xishuangbanna, a tropical region on China's border with Southeast Asia, the creatures also inhabit Pu'er and Lincang in Yunnan.

To better improve protection and conservation work, in 2008, China established the Asian Elephant Breeding and Rescue Center in Xishuangbanna, home to China's largest number of wild Asian elephants. And Xiong is among the first group of staff members working there.

With Xiong's meticulous care, Ran Ran gradually recovered. He said he spent even more time with the giant, whom he treats more as her "elder daughter," than his own daughter.

He recalled one time in 2013 when he was faced with a tough dilemma – both Ran Ran and his two-year old daughter became ill at the same time. But he says he knew where his skills were needed the most. "Ran Ran was very dependent on me. My daughter at least had her mother by her side," Xiong explained.

"Thanks to the understanding and support of my family, I've been able to carry on with my career of protecting elephants for 17 years." 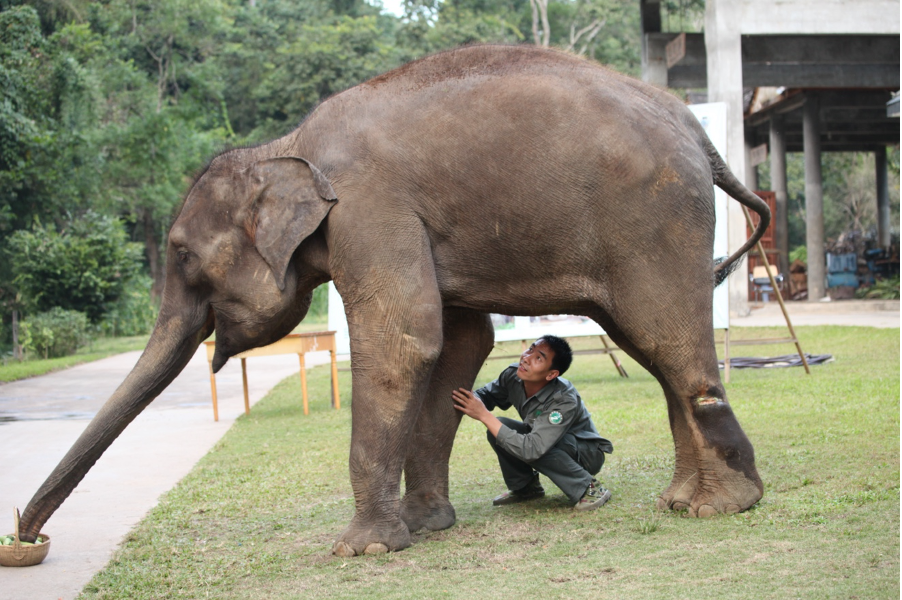 Ran Ran's successful "mission" brought the center much valuable experience on elephant rescue and care. Over the years, Xiong and his colleagues have participated in dozens of rescue missions, mostly helping badly injured elephants. By the middle of 2021, over 20 elephants had been rescued by the center.

The 40-year-old caretaker and vet told CGTN that each rescue mission is an adventure, as the team faces many unpredictable emergencies, such as attacks from jumbos.

About ten rescued elephants are now receiving care and attention at the center. All the keepers treat them as if they were their own children, and that's why they are widely called "elephant dads."

Chen Jiming, Xiong's colleague at the center, told CGTN that he once slept in an elephant shed for several weeks to look after a wounded elephant.

"I was almost unable to sleep, as she always disturbed me with her trunk," said Chen.

Last year, the center rescued a two-month-old baby elephant from a nearby village, whose legs were hurt by entangled rattans. Apart from trying different treatment plans, Xiong and other caretakers also tried every possible means to provide him with essential nutrients, such as feeding him sheep milk.

The effort of the caretakers is widely considered a great example of how much China values wildlife protection. In 2015, Prince William paid a visit and even interacted with Ran Ran. 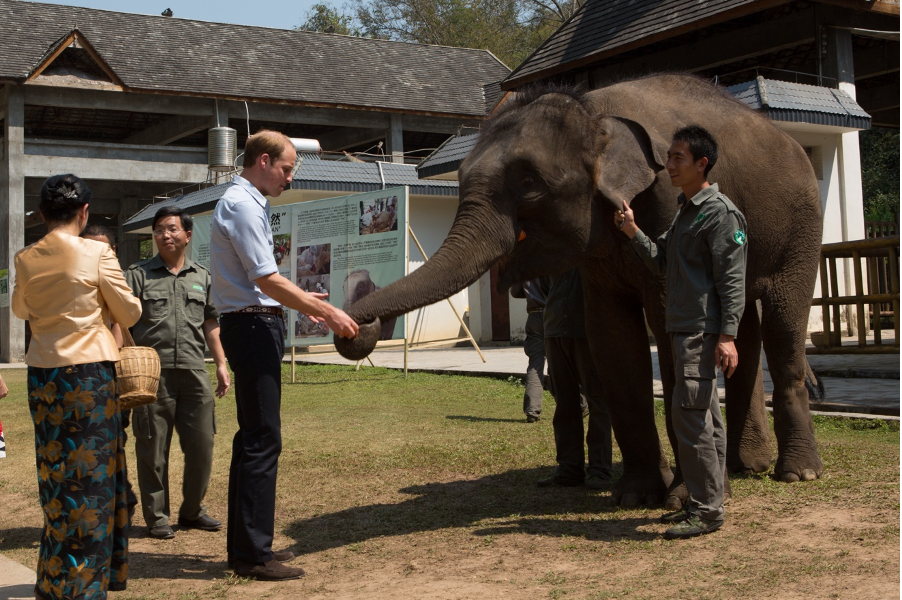 Prince William interacts with Ran Ran during his visit to China in 2015. /Xiong Chaoyong

Prince William interacts with Ran Ran during his visit to China in 2015. /Xiong Chaoyong

For Xiong, his long-term devotion is worthwhile. He said he has formed a close bond with these majestic animals, especially Ran Ran.

One time, he fell down by accident while taking Ran Ran home from survival training, and slid down the hill at very fast. Seeing this, Ran Ran trumpeted and held his head to the ground to stop him.

"I teared up when I got up and held his trunk for quite a while," Xiong recalled. "She knew how to help me when I was in danger just as I once did for her."

"I have a special feeling for elephants. When I see the ones who were almost on the brink of death greeting us happily every day, my heart fills with a sense of happiness and accomplishment," he said. 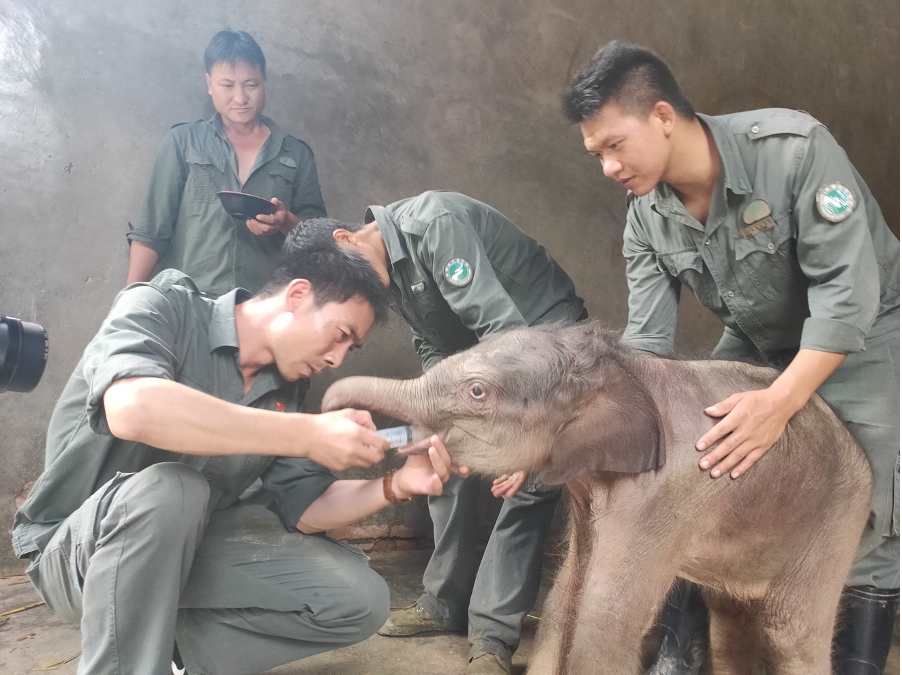 A big surprise came in 2019 when Ran Ran gave birth. Xiong joked that the new arrival made him a "grandfather."

Over the 17 years, nine elephants were born at the center through the long-term assisted breeding experiments by Xiong and some Asian elephant researchers.

Next, the award-winner said he will try to share his rich knowledge and experience of elephant-care with more people.

"I hope more people would like to join in the undertaking of Asian elephant protection, as the harmony between human beings and wild animals needs unremitting efforts."