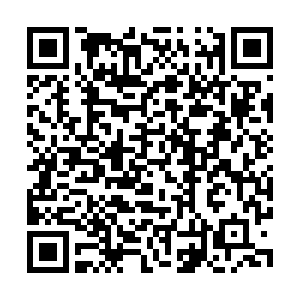 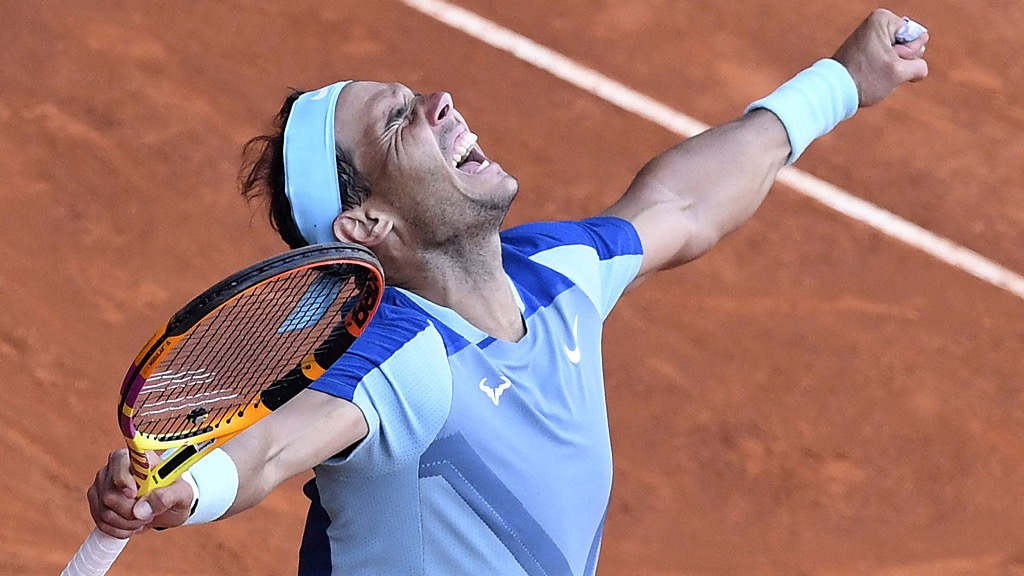 Rafael Nadal beats David Goffin during their Madrid Open singles match at the Caja Magica in Madrid, Spain, May 5, 2022. /CFP

Rafael Nadal beats David Goffin during their Madrid Open singles match at the Caja Magica in Madrid, Spain, May 5, 2022. /CFP

Rafael Nadal said on Thursday he drew inspiration from Real Madrid's heroic comeback against Manchester City less than 24 hours previously as he survived a scare from David Goffin, saving four match points en route to a tight 6-3, 5-7, 7-6 (11/9) victory in the Madrid Open.

The win kept alive Nadal's quest for a record-extending sixth title in the Spanish capital and earned him a spot in the quarter-finals, where he faces his compatriot Carlos Alcaraz.

On Wednesday, Real scored in extra time to stun City 3-1 to set up a Champions League final with Liverpool later this month.

Nadal, a 21-time major champion, was contesting just his second match after a six-week break due to a rib injury and rebounded from tricky moments during his showdown with Goffin, who has a career-high ranking of seventh but is currently down to 60 in the world.

Nadal had to recover from an early break before clinching a 46-minute opening set.

The Spanish third seed held two match points and served for the second set but was stretched to a third by Goffin. 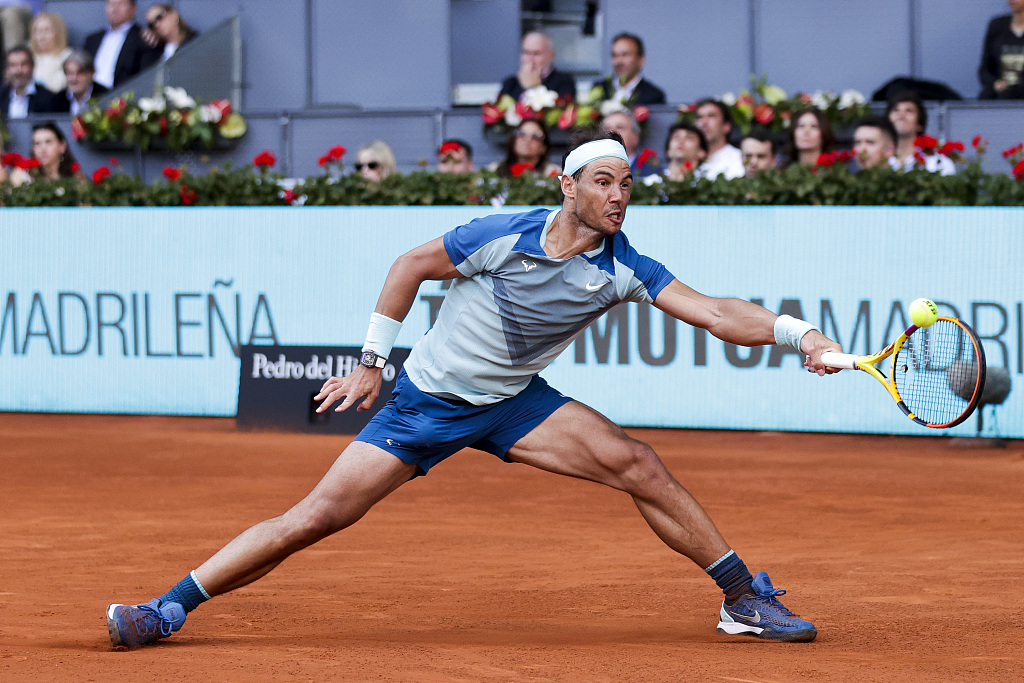 Rafael Nadal showcases his fighting spirit to bounce back from the brink of defeat during the Madrid Open, May 5, 2022. /CFP

Rafael Nadal showcases his fighting spirit to bounce back from the brink of defeat during the Madrid Open, May 5, 2022. /CFP

In the deciding-set tie-break, Nadal saved four match points, hitting clutch drop shots on two of them, before he finally moved into a record-extending 99th ATP Masters 1000 quarter-final and his 16th in Madrid.

"Yesterday has been an unforgettable night. The spirit that the Real Madrid team have is just incredible and for me today in some way has been an inspiration," said the 35-year-old, who attended the game at the Santiago Bernabeu.

Nadal is 2-0 against Alcaraz, having defeated the teen phenom in Madrid last year and at Indian Wells in March.

"I think that today, he is better than me and he has a good dynamic, a good momentum," Nadal said of Alcaraz, who is riding a seven-match winning streak that includes a title run in Barcelona.

"I'm clear who, from the beginning, has some kind of advantage in tomorrow's match. But in that regard, I will try to do as much as possible to be competitive."

Alcaraz said: "I dream of being the best, and I fight for it. And to be the best, you have to beat the best. I believe that I am ready for this challenge."

Earlier, former world number one Andy Murray was forced to pull out of his last-16 match against Djokovic, citing food poisoning.

It would have been the 37th meeting between Murray and current world number one Djokovic, but the first since they played each other in the Doha final in January 2017. 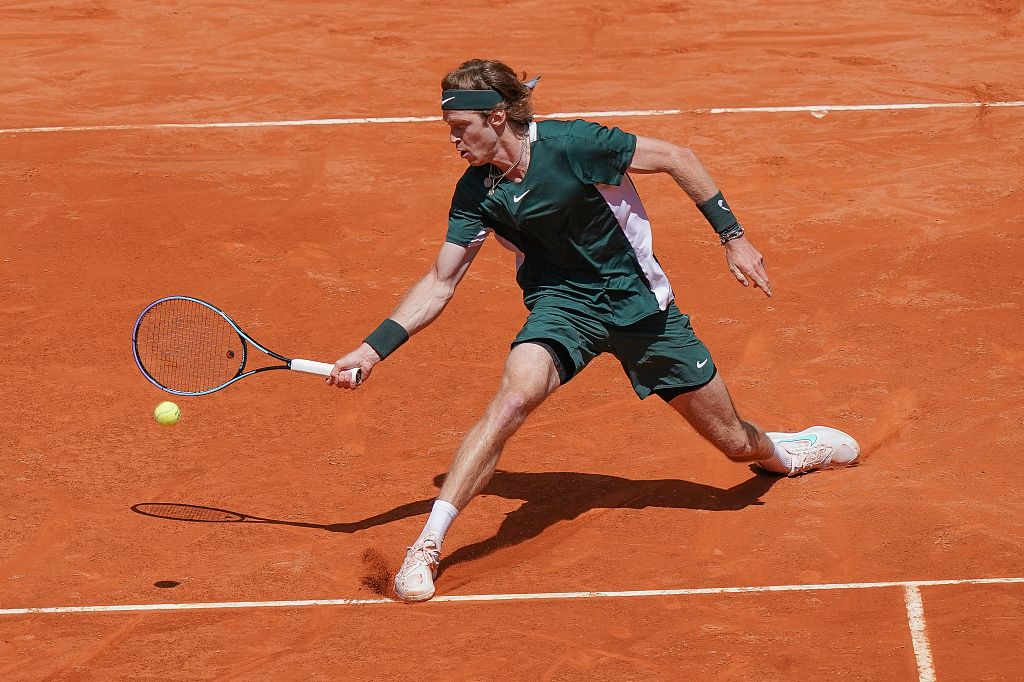 Sixth seed Andrey Rublev reached the seventh Masters 1000 quarter-final of his career with a 7-6 (9/7), 7-5 result against Dan Evans of Britain.

Rublev said it has been a "stressful" tournament for him so far, despite arriving to the Spanish capital fresh from a title run in Belgrade.

"I'm going on court thinking for sure today I'm going to do everything and I will be calm and then I'm doing really stupid and easy mistakes that make no sense," said Rublev.

In the last eight, Rublev will face Stefanos Tsitsipas, who downed Grigor Dimitrov 6-3, 6-4.

Defending champion Alexander Zverev also punched his ticket to the quarter-finals after his opponent Lorenzo Musetti retired from their match in the second set with a left thigh injury.