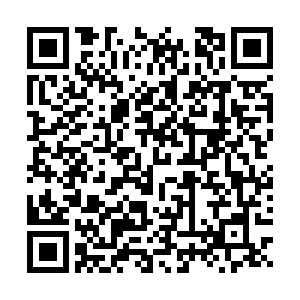 Female participation in football, the world's most popular sport, is on the rise.

A record 91,648 attendance was set on April 22 when hosts Barcelona routed Wolfsburg 5-1 during their Women's Champion's League semifinal at Camp Nou stadium.

The record surpassed the previous mark of 91,553 attendees on March 30 when Barcelona beat Real Madrid 5-2 during the Women's Champions League at Camp Nou stadium.

"We are very happy not just for the result but also for the atmosphere at the stadium. It is spectacular that we have set a new record," Barcelona midfielder Patricia Guijarro said. "What happened today and a month ago has left us speechless. As the days, or the years go by, we will understand better what has happened. Right now, we have not completely grasped the magnitude of this experience." A record attendance number of 91,648 is displayed on the LED board during the UEFA Women's Champions League semifinal first-leg match between Barcelona and Wolfsburg at the Camp Nou stadium in Barcelona, Spain, April 22, 2022. /CFP

A record attendance number of 91,648 is displayed on the LED board during the UEFA Women's Champions League semifinal first-leg match between Barcelona and Wolfsburg at the Camp Nou stadium in Barcelona, Spain, April 22, 2022. /CFP

Why did the Barcelona match have a large stadium attendance?

"If any team can pull off a world-record attendance, it's Barcelona. The club's women's team was established in 1988, and Barca's long-standing commitment to engaging its fanbase and developing its team has paid off," sportswriter Michael Da Silva wrote in a report published on DW.com on April 1.

First, it was a version of "El Clasico," a Spanish phrase used to describe any match between rival clubs Barcelona and Real Madrid, even though Real Madrid's women's team only came into existence in July 2020.

"Second, Barcelona made tickets available to its 147,000 club members for free, plus a modest admin fee," he continued.

"Barcelona have been very successful at creating a strong identity around its club which extends beyond the senior men's team in a way that the women's team have benefited, too," DW's women's football expert Alina Schwermer said. "They went early with their marketing of the Clasico, but they also have the infrastructure in place."

"Women's football offers a chance to see football anew," Schwermer said. "It could be a possibility to create a different dynamic starting with women's football that can fuel change. Because if the women's game simply follows the same path as the men, it will reach the same result with the same problems."

Third, it is a global trend to support women's football, especially when the Union of European Football Associations (UEFA) has pushed forward the Women's Champions League matches to play as many as possible in large stadiums, "a key part of its strategy to bring the women's game to new and bigger audiences."

"In this first season of the centralized UEFA Women's Champions League, we had 13 group-stage matches played in major venues," Nadine Kessler, UEFA's chief of women's football, said in a statement in April.

"We are delighted to see this trend continue into the quarterfinals, where seven of the eight clubs will play in their bigger stadium," Kessler said. "It's an incredible occasion and a quarterfinal lineup that promises world-class football in world-class class arenas. Big moments like these are what women's club football needs." 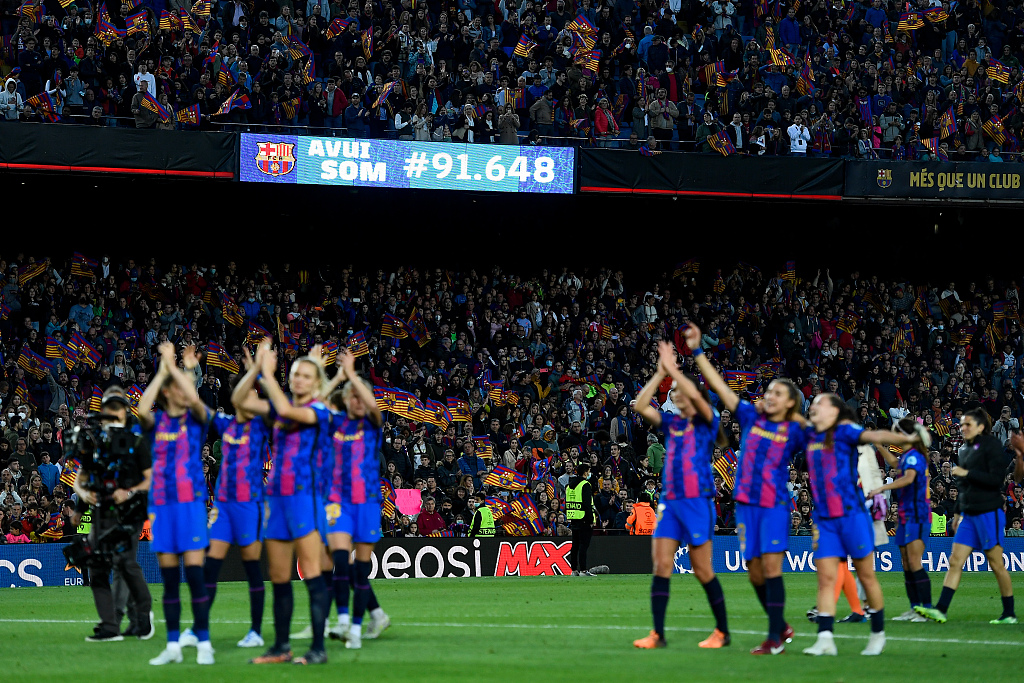 Women's World Cup, a tournament organized by the world's football governing body International Federation of Association Football (FIFA), has a large attendance due to the teams' packed schedules and competitiveness.

Weekly attendance in the European women's football matches is not as high as those in Barcelona.

"Smaller clubs in England's Women's Super League do not tend to do quite as well on the gate. Most of the teams outside of the top three attract between 500 and 1,000, although clubs are always working to try and encourage new fans," read an October 2021 post on football website fourfourtwo.com.

The stadium attendance of Bayern Munich women's team, the football giants in the German Bundesliga, is gradually recovering from the setback affected by the COVID-19 pandemic.

More information can be found in the infographics as follows: 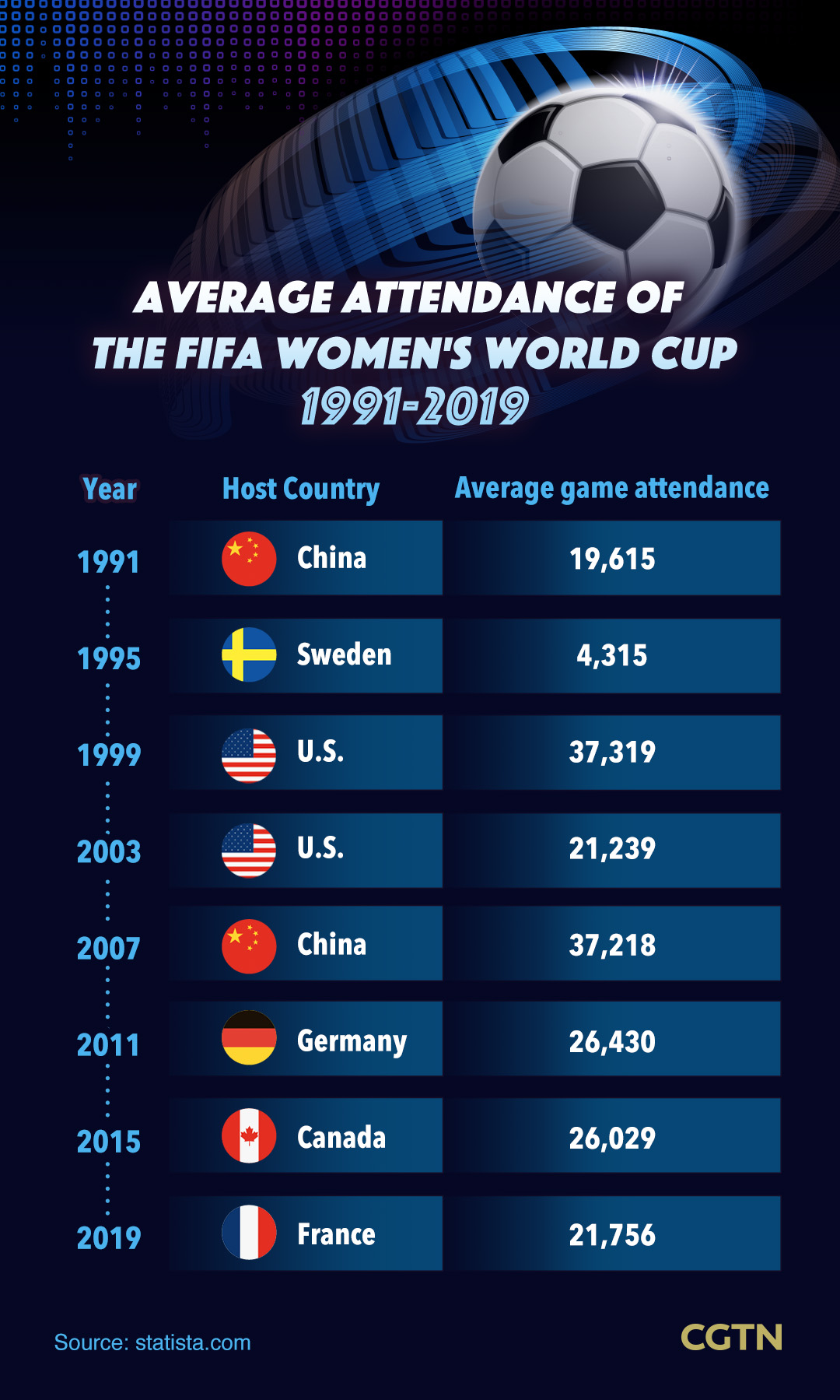 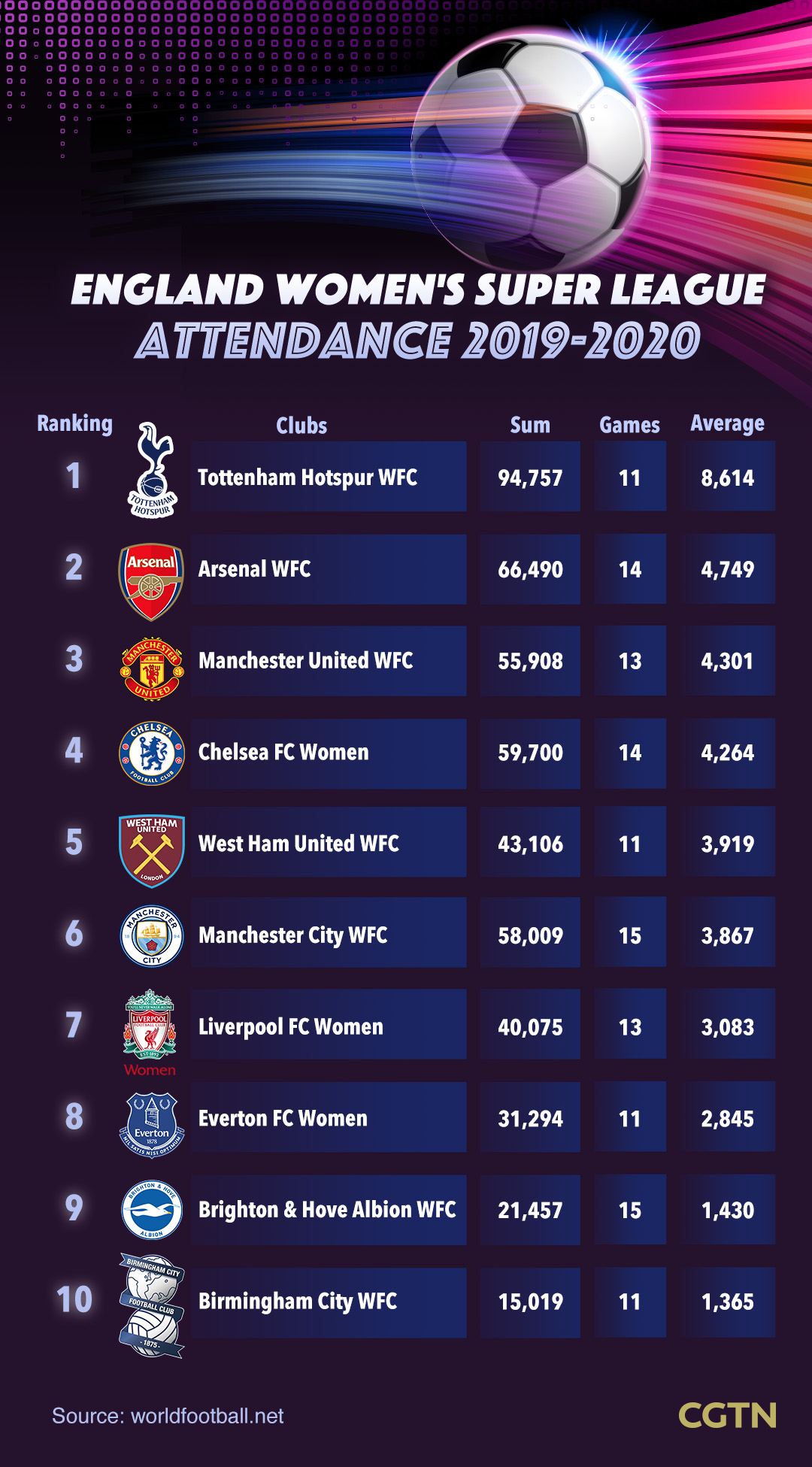