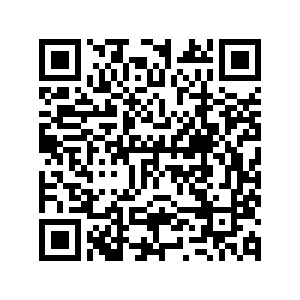 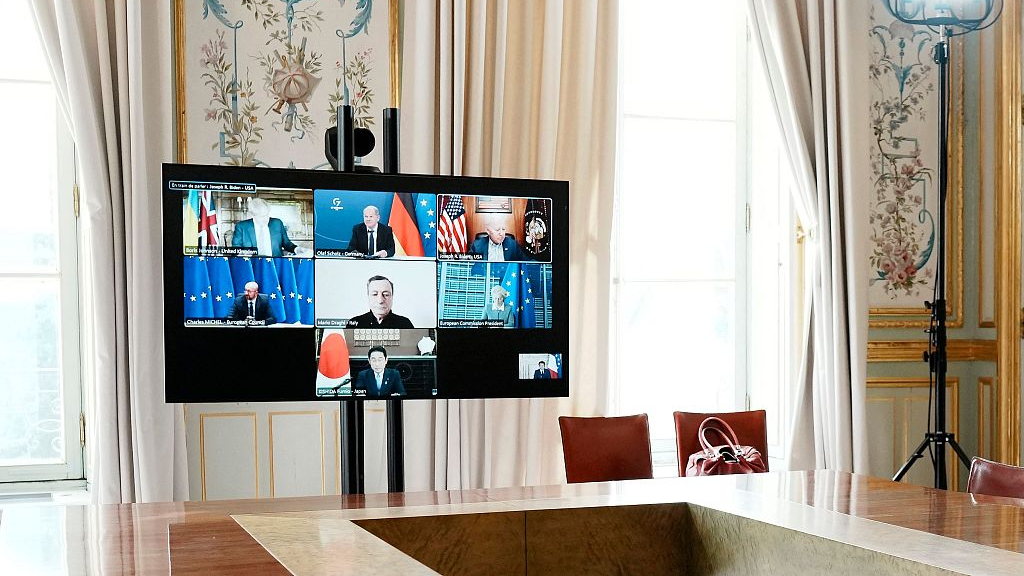 A photograph shows a general view of the video screen of G7 leaders during a video-conference on Ukraine with France's President at the Elysee Palace in Paris, May 8, 2022. /CFP

A photograph shows a general view of the video screen of G7 leaders during a video-conference on Ukraine with France's President at the Elysee Palace in Paris, May 8, 2022. /CFP

On May 8, a meeting of the G7 group of advanced economies, including the leaders of Canada, France, Germany, Italy, Japan, the United States and the United Kingdom concluded with a commitment to phase out and cease importing oil from Russia stating "we commit to phase out our dependency on Russian energy, including by phasing out or banning the import of Russian oil. We will ensure that we do so in a timely and orderly fashion."

The meeting coincided with new sanctions on Moscow being announced by the United Kingdom and the United States, but comes amid a failure of the European Union as a whole to yet agree on the same proposed oil embargo, largely being held up by rejections from several member states.

Although depicted as such in the mainstream media, the G7 statement is not the gamechanger against Moscow it may be assumed to be. Anyone who pays close enough attention to the statements of these summits will be aware that there is a recurring theme of being high on rhetoric and style, but low on substance and results.

The G7 is a talking shop at best, one which frequently bends to American talking points for the pure sake of facilitating unity, concealing the often-complicated differences within its membership body. To put it bluntly: Some things are easier said than done.

The group of seven is at best, a public relations effort as opposed to a serious international institution. It has no institutional apparatus, no binding rules or regulations or governmental structure to implement its vision. Rather, it is simply a gathering or club which has in recent years become increasingly elitist and ideological in character, and is intended to create the impression of a common agenda among its members.

As a result, although it describes itself as representing the "most advanced economies" in the world, it ultimately excludes countries who are large enough to warrant membership. The G7 subsequently sees itself as elite and superior to the G20, which is given lesser political stakes and interests as it forces more compromise.

As it is not a binding institution, the agenda of the G7 is effectively captured and shaped by the United States, who uses the body to legitimate its own foreign policy goals and make the others conform. It is no surprise that the previous G7 summit last year focused extensively on China, and also demanded a new "investigation" into COVID-19 in line with the U.S. talking point of that time in politicizing the pandemic with conspiracy theories.

But this U.S. jerrymandering is also served as a benchmark to illustrate G7's underlying weaknesses and "lack of teeth." As noted above, because the institution is not binding and swayed towards conforming to American preferences, the group's joint statements and pledges should never be taken too seriously, and have an extensive history of overpromising and underdelivering in respect to various things. 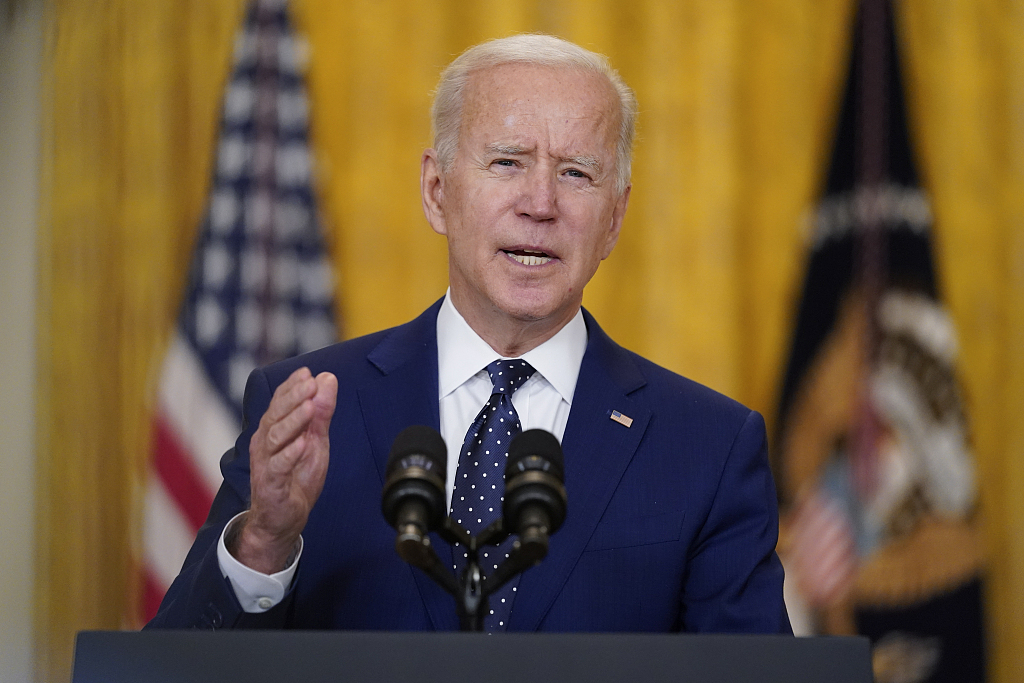 U.S. President Joe Biden speaks about Russia in the East Room of the White House in Washington, April 15, 2021. /CFP

U.S. President Joe Biden speaks about Russia in the East Room of the White House in Washington, April 15, 2021. /CFP

The most explicit example of this pertains to China last year. The leaders of the G7 pledged together that they would create a coordinated, private sector alternative to the Belt and Road Initiative known as "Build Back Better" in order to compete with Beijing. One year later, this proposal has never as much been heard of again, that's because it did not pledge to create any kind of institution, framework, coordination of funding and was based purely on rhetoric without any binding pledges.

This allows us to understand that G7's obsession with rhetorical showcasing in lieu of common objectives masks the underlying differences in national interests and domestic circumstances pertaining to each country's leader. How for example after all, could a crisis ridden economy like Italy possibly compete with Chinese infrastructure financing?

In this case, the G7's proposal to end reliance on Russian energy is equally rhetorical and vulnerable. While it is easy for its members who hold their own oil reserves to sign up to, such as Canada, the U.S. and the UK, there is significant doubt about the political will of its European counterparts in the midst of challenging conditions, as well as Japan.

What is more striking is that the G7 statement or structure is not capable of offering any kind of alternatives, contingency plans or coordinated strategies to do so (similar to "Build Back Better") and the member states are merely expected to do so themselves. The inability of European countries in particular to find or secure an alternative supply in the midst of surging energy prices is a self-imposed strategic vulnerability.

In this case, G7 is a vastly overrated talking shop which strives to establish compromise and coordination, largely in following American preferences, but has long lacked the means to thoroughly implement its visions. As a result this statement tells us nothing about how or when its members will overcome energy dependency on Russia.