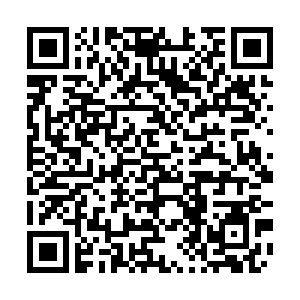 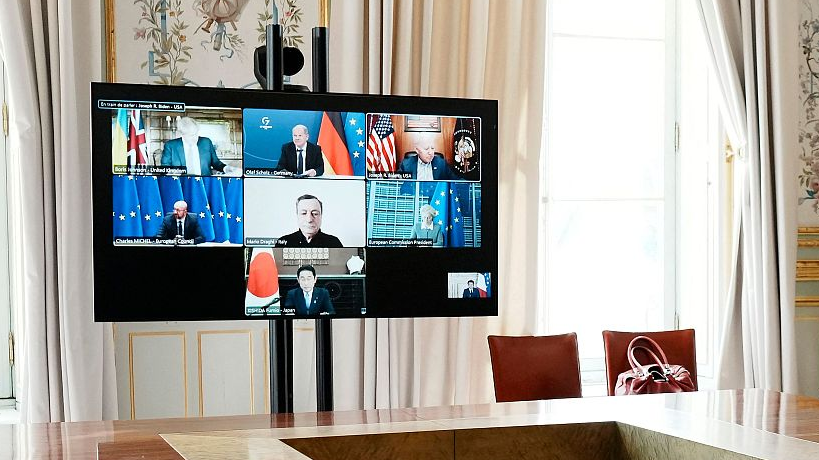 A general view of the video screen of G7 leaders during a video conference on Ukraine with France's president at the Elysee Palace in Paris, May 8, 2022. /VCG

A general view of the video screen of G7 leaders during a video conference on Ukraine with France's president at the Elysee Palace in Paris, May 8, 2022. /VCG

Leaders of the Group of Seven Nations (G7) met for the third time this year via video conference on May 8. Invited to the virtual meeting was Ukrainian President Volodymyr Zelenskyy who addressed the leaders of the G7.

The timing of the meeting is significant since May 8 is the day Europeans celebrate the end of World War II. Moreover, it comes a day before the Russian Federation and other post-Soviet republics celebrate Victory Day.

At the video conference, Zelenskyy likened the current ongoing special military operation of the Russian Federation, which was launched on February 24, to the evils of the Nazis. He went on to condemn the ongoing airstrikes and shelling in Ukraine.

The meeting had as its goal the further isolation of Russia from the international community. Russia was once a member of the enlarged G8 from 1997-2014 when it was suspended due to the referendum in Crimea. It formally left the organization in 2017.

Zelenskyy's remarks to the G7 meeting were the highlight of the meeting. He stressed the need for increased weapons and military aid to help it defeat so-called tyranny. This call for weapons mirrors what Ukraine's Foreign Minister Dmytro Kuleba said in April that the nation was looking for "weapons, weapons, and weapons." 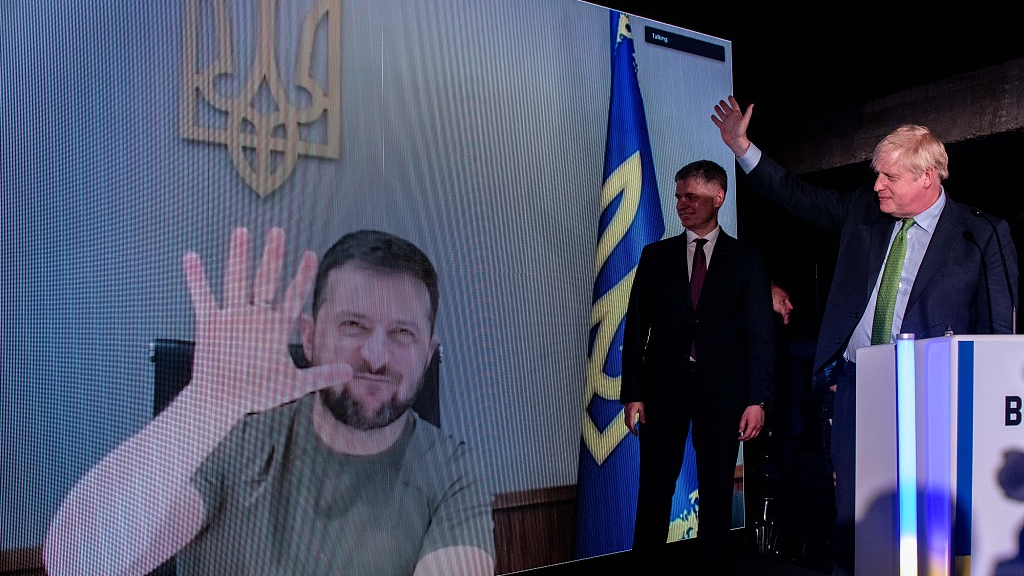 Armament shipments from the West have only further escalated the military confrontation and have the potential to further destabilize any possibility for a peaceful resolution to the ongoing military operation. Zelenskyy highlighted the notable weapons Ukraine has received in his video remarks, including the M142 HIMARS and M270 MLRS.

Increasing armament shipments and sanctions is a recipe for disaster, further exacerbating an already volatile and deadly confrontation. The specter of nuclear war haunts humanity as we seek a just settlement and peace to the ongoing confrontation between Russia and the U.S.-EU-NATO.

The meeting focused on the need for new sanctions against Russia.

Visa restrictions, sanctions and severing diplomatic ties will not solve the deeper issues regarding Europe's security architecture. For that to be solved, Russia must be involved. Any just peace settlement must take seriously the security concerns of the Russian Federation and the increasing size, scale and belligerence of the NATO alliance.

The struggle against disinformation is seen by many in Western countries as an attack on the free press and on ideas unpopular in the Western halls of power. The fact that alternative viewpoints have been banned from the airwaves and from many social media platforms indicates the severity and dangers of the West's confrontation with Russia.

The call made by Zelenskyy for the G7 nations to be the "guarantors of security for Ukraine" also fails to account for Russia's security concerns. Any diplomatic resolution and future security arrangement must include Russia. There is no alternative to this and the Russian Federation has made this red line clear.

The G7 meeting and the intervention by Zelenskyy are indicative of the increased pressure on, and hostility towards, the Russian Federation, Russian President Vladimir Putin and, by extension, the Russian people.

The G7 is made up solely of Western countries, with the exception of Japan, a noted U.S. client in the Pacific. Many are former colonial powers that continue to be imperialist in their policies and actions.