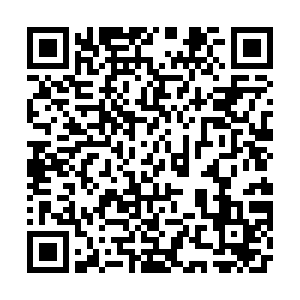 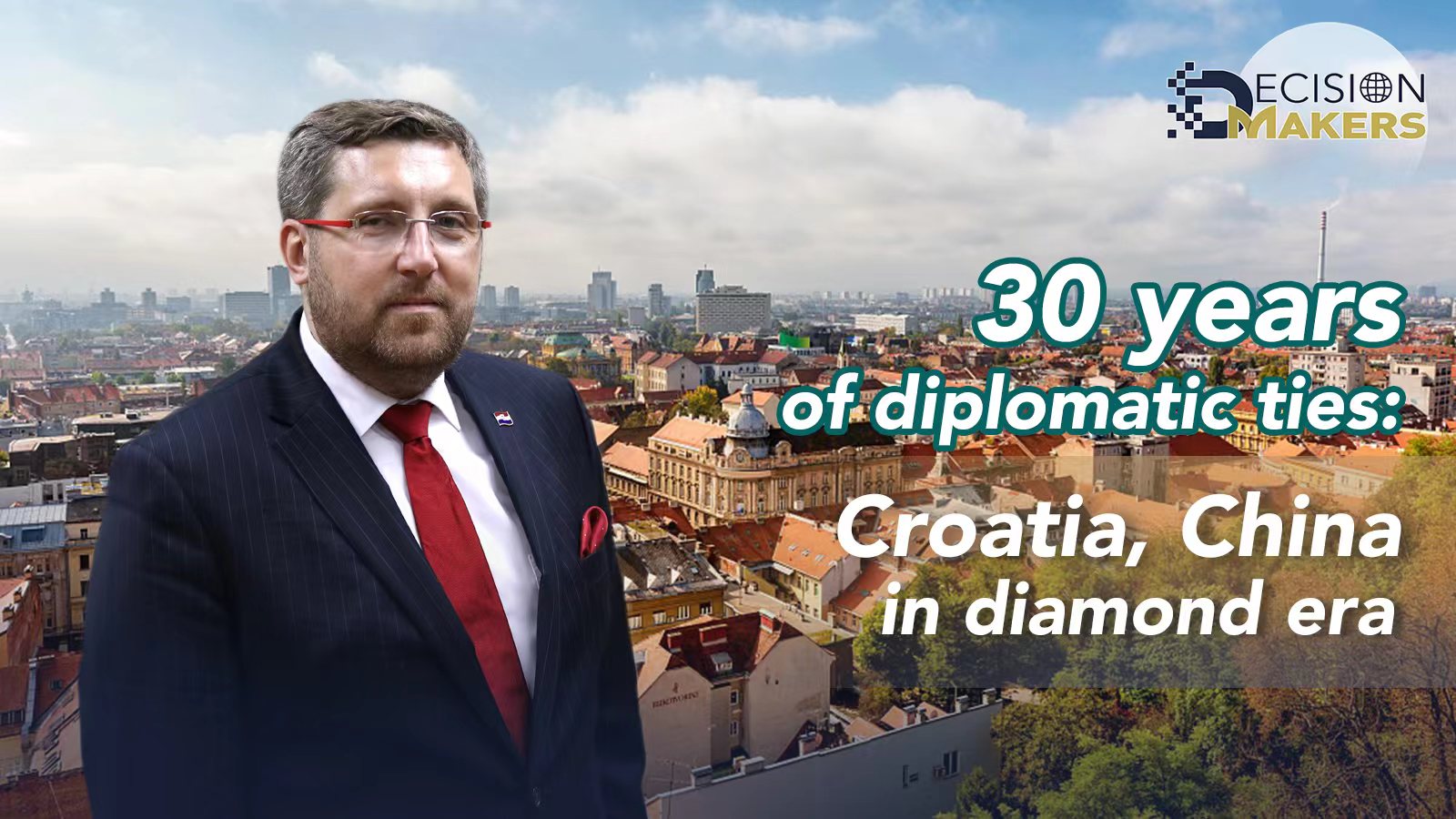 Editor's note: Decision Makers is a global platform for decision makers to share their insights on events shaping today's world. Dario Mihelin is ambassador of the Republic of Croatia to the People's Republic of China. The article reflects the author's opinions and not necessarily the views of CGTN.

On May 13, 2022, we are celebrating the 30th anniversary of the establishment of diplomatic relations between Croatia and China, and of the development of our partnership, which was strengthened and broadened by Croatia's membership and activities within the European Union. As Chinese Premier Li Keqiang so illustriously described, during his official visit to Croatia in April 2019, Croatia and China are in the diamond era of our bilateral relations. This was confirmed during the years of the pandemic through solidarity and mutual support in many fields.

Cooperation between Croatia and China, formally titled as the comprehensive cooperative partnership since 2005, consists of four tracks: bilateral and EU-China as the foundations, which are complemented by Croatia's participation in the Belt and Road Initiative (BRI) and China-Central and Eastern Europe Cooperation. Regardless of the differences in size, economic power, international influence and geographical distance, our countries share a lot of connecting points and interests. Apart from our mutual respect and understanding, our interests have been realized at an increasing rate, especially in the areas of economy, tourism, science, culture, sports, and people-to-people contacts.

Croatia's position, which links together the Mediterranean, Southeast and Central Europe, and the Danube Region, makes for an excellent strategic gateway to the markets of this part of Europe, thus reducing the maritime journey of goods by nearly a week. More and more Chinese partners are beginning to recognize such economic opportunities, as evidenced by the rising number of Chinese projects and investments in Croatia. Here, it is important to emphasize two such projects, whose completion was not even hindered by the pandemic.

Croatia awarded a tender for the construction of its symbolically most important infrastructure project, the Peljesac Bridge, which links two parts of Croatia, to the Chinese company China Road and Bridge Corporation (CRBC). This project has thus become not only a testimony of the high trust between our countries, but also a way to showcase Chinese building expertise within the EU. The Peljesac Bridge is a pilot project for a Chinese company in the EU, by which CRBC had to adopt the standards of competition and implementation of the project according to EU standards, including those on public procurement and use of EU funds. This landmark bridge will be officially opened this summer, leaving a lasting bridge of Croatian-Chinese friendship and an example of Croatia-EU-China cooperation. 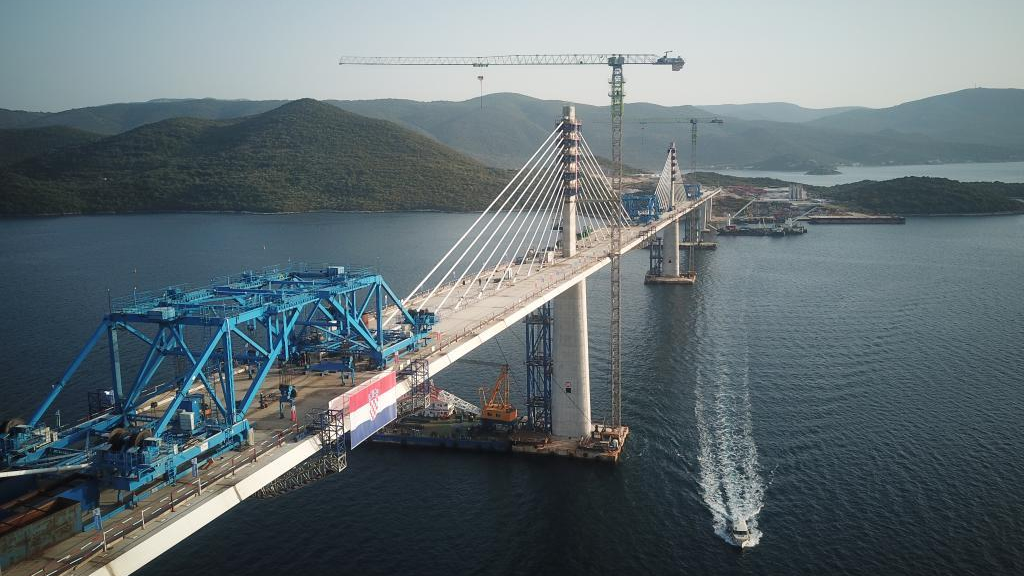 Another flagship project must be highlighted, as this is the biggest Chinese investment in Croatia to date: the construction of the largest wind farm in Croatia near the city of Senj by the Chinese company Norinco International finalized at the end of 2021. The 156-MW wind farm, consisting of thirty-nine 4-MW turbines, spreads over 45 square kilometers. The wind farm should be operating for 23 years, with an annual output of 530 million kWh. This project, which is worth 230 million euros, is an excellent example of investment and green cooperation between Croatia and China.

I am particularly pleased that some Croatian flagship companies are finding their way into doing business in China, yet I would like to see even more Croatian companies here. By improving the level of the playing field, and giving Croatian companies similar opportunities as CRBC and Norinco International have had in Croatia, I believe this can be accomplished to mutual benefit within our economic cooperation. World champion cloud communications platform provider Infobip and special vehicles producer DOK-ING are developing their partnerships with renowned Chinese companies and clients. More and more high-quality Croatian products succeed in entering the vast Chinese market, with wine being the most prominent, to pair with cheese, while we would like others, such as tuna, fish, honey and meat products, to follow soon.

The growing number of Chinese tourists discovering Croatia and gaining an insight into the richness of Croatia's identity, history, natural beauty and culture, gastronomy, as well as all that makes us recognizable worldwide – in 2019, before the pandemic, there were almost half a million tourists – further deepens our friendship and has the potential to open up new forms of cooperation. Croatian citizens were familiarized with the impressive history and culture, as well as the economic and technological achievements of China. By learning more about each other, we strengthen our ties and bring our countries closer together. In 2019, the Croatia-China Year of Culture and Tourism contributed to further intensification of cooperation and mutual familiarity. I hope that the introduction of a direct flight between our two countries after the pandemic will further contribute to creating even stronger bonds between us.

I would like to emphasize the continuous and fruitful cooperation between Croatia and China in protecting fragile biodiversity within our flagship national parks (Plitvice Lakes and Jiuzhaigou, Krka and Huanglong), even awarded within the BRI. Thriving sports cooperation between our two countries should not come as a surprise – Croatian athletes, particularly footballers, are widely known in China, as are Croatia's trademark red-and-white checkerboard jerseys. The same goes for famous pianist Maksim Mrvica, who receives such strong applause here when playing Croatian Rhapsody pieces.

Special mention should go to the small, but dynamic Croatian community in China, and the Chinese community in Croatia, which bring us closer together. In this vein, our citizens are everyday ambassadors of our traditions, customs and heritage.

I am certain you've heard that Croatians here are talking about some Croatian contributions to humanity. The necktie (cravat), which first appeared as a part of the Croatian military uniform in the form of a picturesque adornment around the necks of Croatian soldiers in the Thirty Years War, was also accepted as a mark of elegance throughout the world. Croatia is still proud of this historical gem, and October 18 is commemorated as Cravat Day. Thanks to the Croatian computer programmer Tomislav Uzelac, MP3 Players have become an essential part of our everyday life. The Dalmatian dog, the best-known indigenous Croatian canine breed, without which the famous Disney cartoon 101 Dalmatians would never have been made, also originates from the part of Croatia that bears its name. The "European Great Wall" is in the south of Croatia, around the old city and sea saltworks of Ston. There is also evidence that Marco Polo, who traveled the old Silk Road and brought Europe and Asia closer together, was born in the Croatian city and island of the same name, Korcula, then a part of the Venetian Republic.

With the strong partnership relations, increasing investment dynamics and enviable advances of increasing Chinese tourist arrivals, which we hope to witness again after the pandemic, we can truly say that the future holds a bright perspective for further development of our relations in all aspects. Croatia indeed gives high importance to furthering cooperation with China in all spheres of mutual interest. As I often say, we owe it to the legacy of Marco Polo to strengthen our cooperation and bonds. To revert to Premier Li's assessment, diamonds are not only sparkling and valuable, but also strong, just like the Croatian-Chinese friendship and partnership.