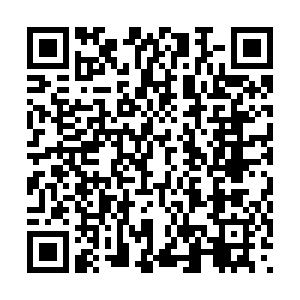 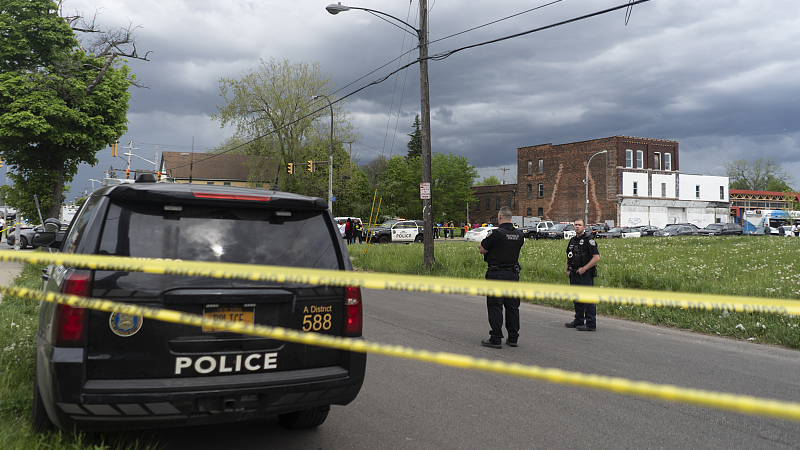 Police are posted on Riley Street after a shooter who fired on multiple people at the Tops Friendly Market on Jefferson Avenue and Riley Street was taken into custody, Buffalo, New York, U.S., May 14, 2022. /CFP

Police are posted on Riley Street after a shooter who fired on multiple people at the Tops Friendly Market on Jefferson Avenue and Riley Street was taken into custody, Buffalo, New York, U.S., May 14, 2022. /CFP

Editor's note: William Jones is the Washington bureau chief of Executive Intelligence Review news service and a non-resident Fellow of the Chongyang Institute for Financial Studies, Renmin University of China. The article reflects the author's opinions and not necessarily those of CGTN.

The world has again been shocked by the brutal shootings in Buffalo that took the lives of 10 people so far. Much of the follow-up discussion will be focused again on the proliferation of firearms in the United States, and, indeed, that discussion is relevant. But more important are the revelations coming out about the killer's motives and his ideological ties to a deep-rooted white supremacist network that is international in its character and represents a real threat in many countries. The killer was on a racially motivated killing spree and more people would have died had he not been stopped by the officers outside the store.

The killer, Peyton S. Gendron, had also posted a 180-page manifesto where he said he drew his inspiration from the killings at the Christchurch mosque in New Zealand by Brenton Harrison Tarrant in 2019. He said that he had discovered the Christchurch killer's own writings and found a common cause with them. The writings of the Christchurch killer were also made public at the time and were later widely proliferated by the Ukrainian nationalist Azov Battalion, a key player in these white racist networks.

President Joe Biden is traveling to Buffalo to condemn the murders and to console the grieving. But, ironically, the same President Biden has also authorized billions of dollars of primarily military aid to Ukraine, much of which will end up in the hands of the right-wing Azov Battalion. Even the Washington Post in an article on May 14 admits, that given the chaos in Ukraine and the wide diversity of groups involved in this conflict, nobody really knows in whose hands these weapons will end up.

If anybody thinks there will be any movement whatsoever on gun control in America, they should reevaluate their hopes in the light of this fundamental contradiction. American gun manufacturers are now working overtime to produce killer weapons with the full blessings of the U.S. government. They have become even more influential thanks to the war in Ukraine, and no public outcry is going to change that until the U.S. really gets out of the war-fighting business, and that doesn't seem to be the case any time soon on Biden's watch. 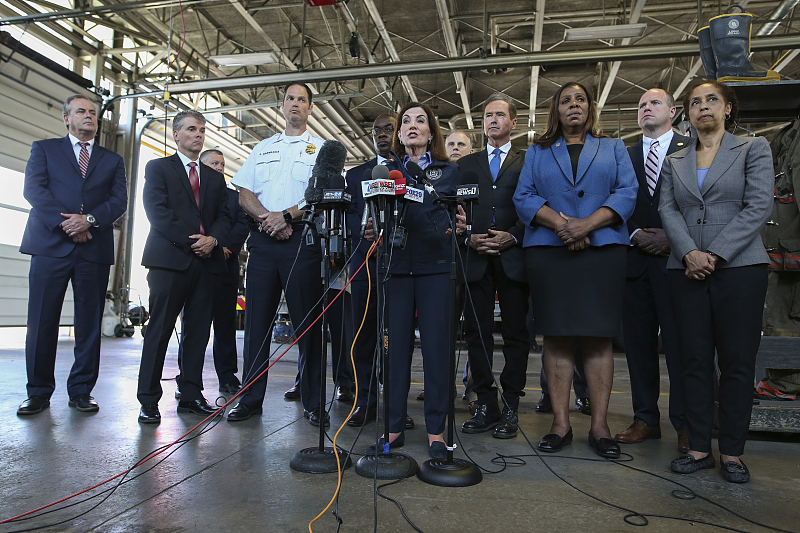 New York Governor Kathy Hochul speaks during a news conference about the May 14 shooting at a supermarket in Buffalo, New York, U.S., May 15, 2022. /CFP

New York Governor Kathy Hochul speaks during a news conference about the May 14 shooting at a supermarket in Buffalo, New York, U.S., May 15, 2022. /CFP

We saw something similar happening when then National Security Advisor Zbigniew Brzezinski decided in 1979 to support a proxy war against the Soviet Union in Afghanistan. Thousands of stinger missiles and other weaponry went to Afghanistan to help the mujahideen fight the Soviets. There was even an active U.S. intelligence operation at the mosques in the U.S. to recruit fighters. They were called "freedom fighters" back then, similar to the Azov "liberators" of today. That operation came back to bite America in a big way on September 11, 2001.

U.S. officials who have been on the ground in Ukraine long before the Maidan "revolution" in 2014 were quite aware of who they are dealing with here. While they have successfully kept the Azov Battalion out of the headlines, knowing what the reaction would be if people really knew the whole story since 2014. Even within the ranks of the U.S. military, you have many supporters who believe in the same white supremacist dogma as Azov and the Buffalo and Christchurch shooters do. No doubt many of those "foreign volunteers," (some of them ex-U.S. and British military), flocking to Ukraine to fight the Russians, are also motivated by the same racist ideology.

In many respects, the U.S. has been playing the "extremist card" ever since World War II. The founders of Azov and its predecessor, the Organization of Ukrainian Nationalists (OUN) of Stepan Bandera, which directly collaborated with the Nazis against the Soviet Union, were in fact incorporated into the post-war U.S. intelligence operations, run by former Nazi General Reinhard Gehlen. With the support of U.S. intelligence, many of them were brought to the United States in the post-war period, to help shape U.S. opinion about the Soviet Union. These networks have long served as an asset of U.S. intelligence and were put to good use during the days of Maidan.

If the United States is ever to get beyond this trauma of violence and hatred in our society, this has got to come from the top. For as long as our institutions, the White House, the State Department, the Defense Department, etc., continue to spew out hateful pronouncements regarding Russia or other alleged "rivals," ignoring the problems faced by ordinary Americans in their daily lives, issues of jobs, discrimination, the destruction of U.S. infrastructure and our education system, the cycle of violence will continue – at every level of society.